A group of veterans from New York finally got their chance to fly to Washington DC last week after the Covid pandemic forced the Honor Flight Network to be postponed for the last two years. 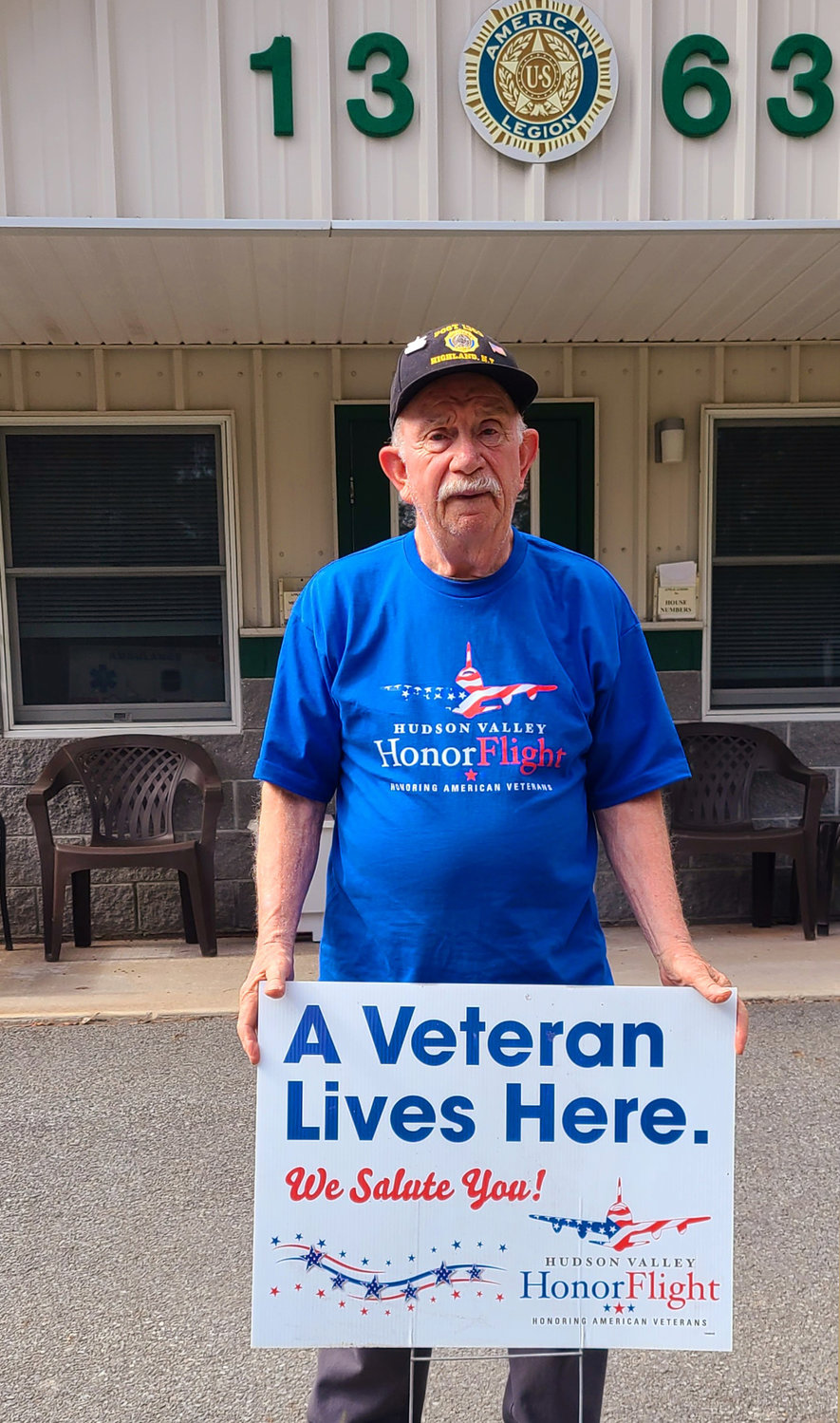 Pete Barnes, a Vietnam War era veteran and the Commander of the American Legion Post 1363 was the only local veteran to take the Honor Flight Network and be their guest on a trip to Washington DC. In Washington Pete along with 80 other veterans visited the war memorials and landmarks that were created to honor their military services. According to Pete, “It was such a wonderful day and every American and surely all veterans should visit these memorials. It was an amazing experience which I will never forget in my life.”
DEMOCRAT | Paula Campbell
Posted Tuesday, April 26, 2022 7:00 am
Paula Campbell

A group of veterans from New York finally got their chance to fly to Washington DC last week after the Covid pandemic forced the Honor Flight Network to be postponed for the last two years.

The not-for-profit Honor Flight Network was created by Earl Morse a physician’s assistant and retired Air Force Captain and Jeff Miller a businessman and son of WWII veteran who created the Network in 2005 and took twelve veterans free of charge in six small planes to Washington D.C. to visit the various veteran memorials that were created to honor their military service.

In the past many veterans wait years to join the flights to see first-hand the tributes from a grateful nation for their military service. Now using commercial airlines, many veterans both men and women have been honored with joining the Honor Flights and in 2015 the first all-female Honor Flight was held with 140 female veterans.

Pete Barnes the Commander of the American Legion Post 1363 was the only local veteran from Highland to join this year’s Honor Flight. Pete told me he was a fresh faced 20-year-old mechanic working at Narrowsburg Motors when he was drafted into the Army during the Vietnam War. “My family did not have a lot of money growing up and we never could afford to travel or go on fancy vacations so the first time I left New York is when I was sent to North Carolina for basic training. After that I was stationed in Berlin in the Signal Corps Pete told me. When I returned from my service things were not good for returning soldiers. I was discharged out at Ft. Hamilton, and we were told to change “into our civvies and quietly return home and hopefully no one would spit on us. No one welcomed us back with open arms-not like it is today.”

Four years ago, Pete sent in his application to participate in the Honor Flight. He was accepted and then had to wait out the suspension of flights due to Covid.

April 9th was quite a day for Pete and the other eighty-one veterans on the Flight! The Flight Network provides “guardians” to be on the trip and assist the veterans during this event packed day.

My “guardian” was my nephew Michael Torelli who was with me every step of the way. Veterans from Sullivan, Orange, Ulster and Pike County-including a 100-year-old World War II veteran from Goshen met in Montgomery were given their special event tee-shirt then served some breakfast and boarded one of the four charter buses to Stewart International Airport - led by Police and a contingent of the Rolling Thunder Motorcycle Club as their escorts.

The Rolling Thunder Motorcycle Club has a national advocacy program for all prisoners of war and those soldiers still missing in action. At the Airport, the traveling veterans were given a salute by Fire Department trucks and their bagpipers and a crowd of well wishers to see them off. “It was quite a send-off and very impressive” Pete told me.

Pete said once in Washington the veterans traveled to the World War II Memorial, the Lincoln Memorial, the Korean War Memorial and Vietnam Memorial-which was far more impressive than the “travelling version” Pete had seen several times. According to Pete at the World War II Memorial there is a kiosk where any veterans name can be entered, and it will call up their military service report.

“I put in my father Emmett’s name and read his military record of service which was wonderful.” Pete said that their visit to Arlington National Cemetery, the final resting place for over 400,000 veterans and our country’s service-related members, was certainly one of the trip’s highlights.

Seeing the Changing of the Guard Ceremony at the Cemetery was so moving that the large crowd of onlookers fell completely silent. After dinner, the charter bus drove by the beautifully illuminated Marine Corp War Memorial in Alexandria, Virginia (known as the Iwo Jima Memorial). They caught their flight back to Stewart Airport.

A thrilling day provided by the Honor Flight Network completely free of charge to these deserving veterans. In the sixteen years that the Network has operated, over 250,000 veterans from all services have traveled on the Honor Flight Network to Washington D.C. Pete told me that everywhere they traveled to these busy tourist packed memorials the visitors would see their tee-shirts and clear a path for the veterans. “I never in my life had so many people thank me for my service or shake so many hands he told me. “It was such a wonderful day every American and surely every veteran should visit these memorials-it was an amazing experience which I will never forget in my life.”

The Honor Flight is easy to do- a veteran must submit a copy of their discharge papers when they apply and show their ID at the airport. All transportation, meals, tickets to the memorial venues are paid by the Network. Pete told me he will speak with local veterans to encourage them to take the Honor Flight.

According to Pete, “It was a terrific trip and you do not have to belong to any veteran’s organization to take the Flight. I know seniors worry about expenses, but the trip really was free-everything including the flight, meals, snacks, soft drinks, and transportation cost me nothing, and I so appreciate this unexpected show of respect for myself and all the other veterans who served our country, and I thank the Honor Flight Network with all my heart for this wonderful opportunity.”

For more information about the Honor Flights go to honorflight.org.