Last Saturday a group of about fifty volunteers (including this columnist) gathered in Barryville to spend a few hours picking up roadside trash.

This is the second year that the Barryville … 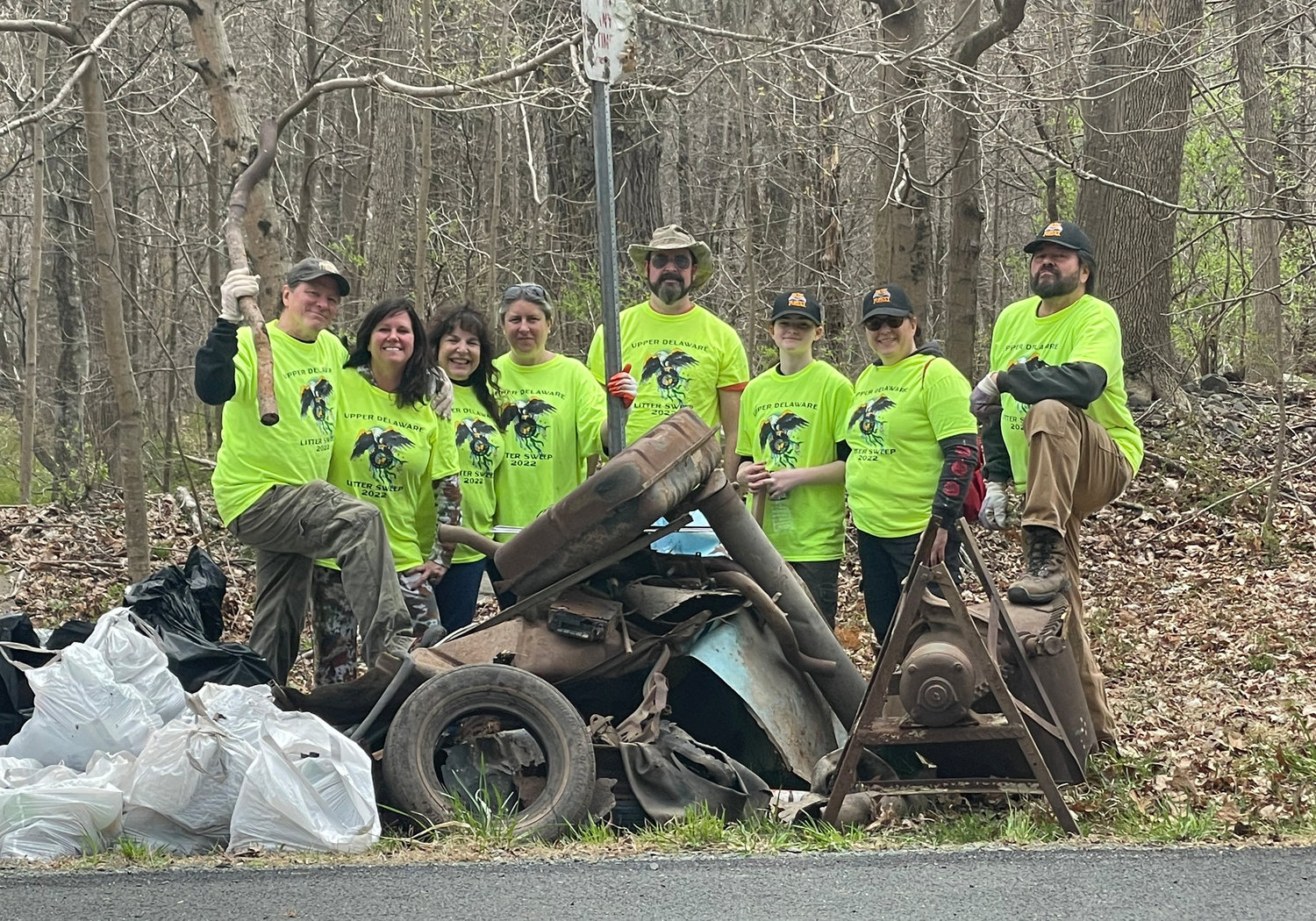 From left to right-Andy Russ, Susan Fraysse Russ, Liz Peterson, Jamie Macri, Austin Hand, Sadie Hand and Sarit Hand. During the Upper Delaware Council’s Litter Pluck last weekend the amazing Dark Forest Creation Crew of volunteers from the Burn Brae Mansion in Glen Spey found loads of metal buckets, piles of tires, bottles, almost an entire car, a bumper with the license plate still attached and a rusted out Sears and Roebuck cement mixer and filled an additional twenty bags with trash. Andy Russ summed up all their hard trash collecting saying “we are undoing the misdeeds of others.”
Contributed Photo | Brian Aberback
Posted Tuesday, May 3, 2022 7:00 am
Paula Campbell

Last Saturday a group of about fifty volunteers (including this columnist) gathered in Barryville to spend a few hours picking up roadside trash.

This is the second year that the Barryville Chamber of Commerce and the Upper Delaware Council has sponsored the Litter Pluck. We all know about the amazing work of the Greater Barryville Chamber has played in supporting so many new and existing businesses in the area (I last counted thirty-one) in Barryville) and holding some wonderful community events but the mission of the Upper Delaware Council may not be as familiar to us-so a brief word from our sponsor!

The Upper Delaware Council was founded in 1988 and is a grant making not-for-profit, tax-exempt organization that serves as a collaboration of local, state, and federal governments and agencies to oversee the environmental and development issues surrounding the local public and private lands in the Delaware River Corridor.

The Litter Pluckers volunteers all met in the Cul-de-sac got our bright yellow tee-shirts featuring an eagle clutching a tire, our heavy-duty gloves, a Nifty Nabber Trash Picker (optional) a hard hat and one large heavy duty trash bag. After some coffee, a few encouraging words from Johnny Pizzolato from the Chamber and a prayer for our environment and our personal safety from Pastor Linda Bohs we were off with our team members to our assigned locations.

Following our team leader Frank Guzman, the administrator for the Living in Barryville Facebook Group Team we headed off the Route 97 up by the eagle observatory. I had worked in this area last year, so the trash was not so astoundingly terrible, but our four-person team did manage to fill about ten bags in addition to construction debris, broken chairs, animal bones, car parts and tires. The Litter Pluck teams went up as far as Lumberland along Route 97 and this year extended onto Route 55 which has never been part of the Litter Pluck before.

Susan Fraysse Russ was part of the Dark Forest Creations Crew from the ever-phenomenal Burn Brae Mansion in Glen Spey. According to Susan they were assigned to an area around the pull off on Route 97 at the bottom of 31-Mongaup Access a little further upriver.

Susan said The Dark Forest Crew found loads of metal buckets, piles of tires, bottles, an entire car-hood, door, exhaust pipe and gas tank, a much newer bumper with the license plate still attached and old rusted Sears and Roebuck cement mixer! In addition, kudos to this industrious crew that managed to fill twenty trash bags with other garbage. Susan told me that her husband Andy said during the clean-up that “we are undoing the misdeeds of others.”

Johnny Pizzolato from the Chamber told me that the Litter Pluck is one of his favorite new community events for all the river communities. “I really want to thank all the volunteers who showed up and worked so hard. We had over fifty volunteers that cleaned up Pond Eddy and Barryville all the way up to Eldred with two dumpsters full of trash! It was great collaborating with Matt at NextGen Dumpsters, Pam and Steve from Der Oskar Tree Services and Frank Guzman and his Facebook team of volunteers. It was a wonderful day and produced a lot of goodwill for our community. Now we get ready for the next event for our river communities-Shad Fest coming up on May 20th-22nd.”

It is true that we live in an incredibly special place and I for one feel some responsibility to keep it that way by volunteering for the litter pluck each year and keeping a bag in my car for any garbage I create. Like many New Yorkers I pick up any trash around the roadway by my house because every little bit helps-undo “the misdeeds of others!”