HIGHLAND – The constabulary of the Town of Highland was put on suspension after a Town Meeting on April 12 and has remained in that state since. In further development of the story, the … 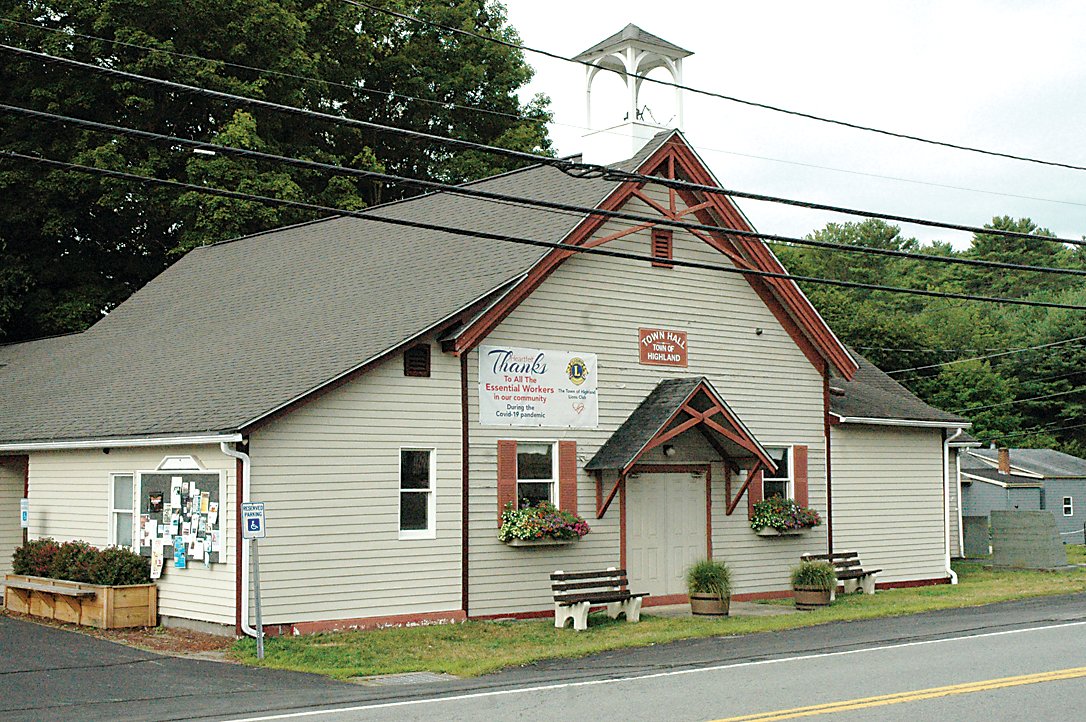 Three allegations against a member of the Constabulary were "substantiated" by the Town of Highland’s Constable Committee on May 31.
Derek Kirk | Democrat
Posted Friday, August 19, 2022 6:10 am
By Derek Kirk

HIGHLAND – The constabulary of the Town of Highland was put on suspension after a Town Meeting on April 12 and has remained in that state since. In further development of the story, the Democrat recently obtained an unredacted report of “substantiated” allegations against members of the Constabulary.

The town released a redacted version of the report last month which was dated May 31.

The town has confirmed the contents of the unredacted report obtained by the Democrat.

According to the unredacted report produced on July 18, six allegations of misconduct were brought up before the Constables Committee, who were charged with the task of reviewing the allegations of “impropriety by and amongst members of the Constabulary.”

Councilman Chris Tambini filled in for Deputy Supervisor James Gutekunst on the committee.

“Substantiated” allegations included a statement from a Constable addressing inappropriate and unprofessional comments made by Constable Marc Anthony, multiple accounts of violation of the Constable policy memo and town camera and security policy by Constable Anthony, and another Constable’s allegations against Anthony regarding “workplace harassment, bullying, [and] creation of hostile work environment.”

The report states that two interviews were conducted by the Constable Committee with Constables mentioned in the report, in which both gave statements against Anthony’s actions in his official capacity as Constable.

The first interviewee said that they do “not feel safe working with Constable Anthony,” and brought forth an account of Constable Anthony’s responsibility in “creat[ing] a hostile workplace environment,” and stating that Anthony “does not follow any policies or procedures and is a liability for the department and the town.”

According to the report, Constable Anthony is alleged by the first interviewee to say that he will “get [Constable] Arias’ badge”, and that “he runs this town. This is my playground.”

The first interviewee also alleges that “[Anthony] is operating his wood business while working for the town,” and that “Cars left on empty,” and “Keys are in the cars.”

The interviewee went on to say that “It’s dangerous.”

The report states that a representative from the New York DCJS said that 35 hours is the minimum time requirement, but “the hiring agency can impose any additional training as they see fit.” The representative also stated that at the time, there was no current roster reflecting handgun qualifying for Constable Anthony to permit him to carry a weapon while on duty.

The report states that the New York DCJS training certification expired in December of 2021.

According to the report, there was no sexual harassment training or CPR/AED training recorded in the personnel file of Constable Anthony at the time.

According to the report, a meeting was held with Sullivan County Fire Investigator Art Hawker to ascertain the feasibility of Article 75 proceedings as well as viability of transition to the Police Department.

Invoking Article 75 of Chapter 8: Civil Practice Laws & Rules of the Consolidated Laws of NY involves the commencement of arbitration hearings and proceedings.

According to the report, Chief D’Agata discussed the immediate vulnerability of the lack of supervision and rank within the Constabulary, as well as the vulnerability regarding the failure to train and record the training.

Chief D’Agata also reviewed the potential for Article 75 proceedings on the basis of “reasonable case with violation of Town policy and aggressive language with [the] Board” and “insubordination.”

Civil Service procedures for hiring and discipline and the disallowing of his officers to “moonlight”, or hold a second position of employment while in office, were also reviewed by Chief D’Agata.

Chief D’Agata reviewed the process for Inter-municipal Agreement with the Sullivan County Sheriff’s Office as well, and offered support in whatever decision the Committee chooses.

The confirmation of all training required with New York Division of Criminal Justice Services and New York Municipal Insurance Reciprocal.

The creation and implementation of a training rubric.

It was also recommended that the commencement of Article 75 hearing against Constable Anthony for “insubordination, multiple violations of Town policy...and harassment” be activated, as well as to hire a non-patrol supervisor responsible for maintenance of training records and disciplinary recommendations.

The Democrat reached out to Constable Anthony regarding the allegations outlined in the report but he declined to comment.