June 9 - Angelo and Joanne Monteleone were raising their kids in Brooklyn when Angelo was offered a job at the former Tallwood Lodge Resort on Route 55 and the family moved to Highland. “I … 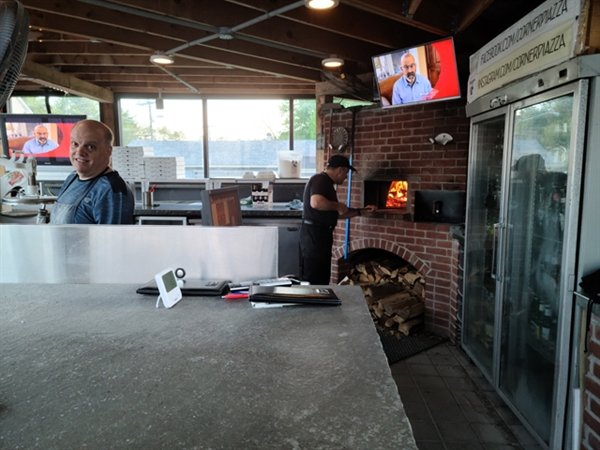 June 9 - Angelo and Joanne Monteleone were raising their kids in Brooklyn when Angelo was offered a job at the former Tallwood Lodge Resort on Route 55 and the family moved to Highland. “I graduated from Eldred and went to Rochester Institute of Technology for a year. My brother Frank worked at the Preserve and got me a summer job in Facilities Management, and I loved it and ended up working there six days a week for 29 years,” Lou Monteleone told me. “When the Preserve closed, I bought the Corner and the Liquor Store and over time built the Pizza Piazza across the road from the Corner Store.”

The Monteleone's are an extremely hard working, tight knit family and during the warm weather Lou, his twin brother Frank and sister-in-law, Phyliss are busy selling the best brick oven pizzas in the County while June, Lou's wife and “rock”, runs the Ice Cream Shop and Liquor Store. We put in about fourteen hours a day on average Lou said. During blackouts and storms that store is open and the Monteleone's are there on site to help and give encouragement and provide food and supplies to those who need it.

One charity Lou has been very active in for the past fifteen years is the St. Baldrick's Foundation which funds medical research projects to cure pediatric cancers.

Monteleone was introduced to the organization by Jeanne Sager — who held the first St. Baldrick's event in Sullivan County — through their mutual relationship with Thunder 102.1FM.

Lou has since hosted several St. Baldrick's fundraisers and visited hospitalized children as Santa. “It just broke my heart to see them struggling so much and being a patient and not a kid. I was heartbroken and knew I had to do something to help”, so for the past fifteen years every September Lou has sponsored a St. Baldrick's Head Shaving in Eldred.

Lou told me the event has raised $150,000 in donations over the years to help fund research projects and allow a day where families who have lost someone to cancer can remember them in a safe supportive environment. Given the Covid-19 virus Lou told me he doesn't know what will happen this September and he is waiting to hear back from the Foundation hopefully by the end of June. “I have been doing some pop-up fundraisers on Facebook to help St. Baldrick's in case I cannot hold an event this year”, he told me.

His other yearly project is the Santa Express which goes roaring off into the freezing winter nights, and The Express is the most miraculous, high spirited, action packed, music filled concentration of Christmas cheer, flat out fun and goodwill you can possibly ever witness and last year visited over eleven towns and has delighted thousands of people in Sullivan County for the past fifteen years.

Lou told me he sees both projects as being tied together to help children. “It's tough out there these days for a lot of kids many of whom suffer in silence so if I can do something to make them happy and have some fun and make their lives easier, I'll do it”, he said. In addition to great food and ice cream, there is always some community project in the works at Lou's shop.

Whether it's cards for our troops at Christmas, writing wish postcard which get sent to the Imagine Peace Tower in Finland, hosting an ice cream party for the actors after a school play, free coffee for utility linemen during power outages, helping a Daisy Troop celebrate becoming brownies, and free ice cream when Lou's beloved NY Mets beat the Yankees, something upbeat and positive is always happening at the Corner.

When COVID-19 hit, Lou put up a big sign “We Will Get Through This Together”. It's about the virus but it is also a message about living our lives as well - Thank you Lou for always thinking about our community and going out of your way to help.