September 22 - Well the first frost has arrived this week and every year when that happens, I always think it is way too early. My friend Jeffrey told me last month according to folklore in late … 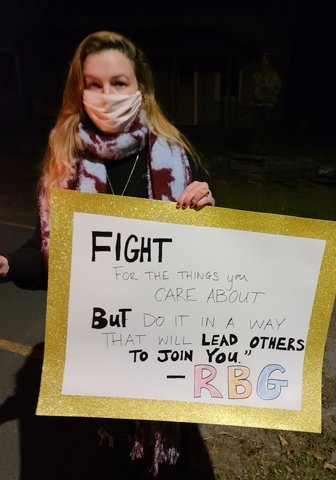 Poet, Political Activist, Author and renown Actress Amber Tamblyn led a memorial vigil for Supreme Court Justice Ruth Bader Ginsburg at the Town of Highland Justice Center in Barryville. Her handmade sign reflects her favorite quote from Justice Ginsburg, “Fight for the things you care about, but do it in a way that will lead others to join you.”
Contributed Photo | Photo by Paula Campbell
Posted Monday, September 21, 2020 12:00 am
Paula Campbell - Community Correspondent

September 22 - Well the first frost has arrived this week and every year when that happens, I always think it is way too early. My friend Jeffrey told me last month according to folklore in late summer after the cicadas climb out of the ground and start singing for their once in seventeen year mating cycle there will be the first frost of the season approximately six weeks later…and it has been just about six weeks! Some actual weather weirdness that seems to be based on facts!

With the open enrollment period for healthcare plans fast approaching, it is a good time to review your current health insurance plans and consider making any changes. Medicare which now covers about forty-four million Americans is a large piece of this sometimes very intricate healthcare puzzle.

The Sunshine Hall Free Library in Eldred is participating in a Zoom webinar called Medicare 101. If you will turn sixty five during the next year and want to learn more about eligibility, or how or when to enroll and the many insurance options available some of which do not have a monthly premium payment, this webinar will be very helpful in figuring it all out.

The webinar will be presented by James Farnham a Licensed Agent for Medicare Insurance Plans with over eight years of experience with Long Term Care Plans, Medicare Supplemental Insurance Part D-prescription plans, and Medicare Advantage Plans. He can navigate through the various benefits and disadvantages of all these resources-and it is complicated to say the least. There will be an opportunity to have your questions answered during the webinar.

The Medicare 101 webinar will be held by Zoom on Saturday October 17th from 10 a.m. until 12 noon and is free of charge. To register you go to the Sunshine Hall Library's website and fill out a form asking for your name, email address and any questions you may have. After that is submitted Patty Kennedy, the Director of the Library, will email a link for the participants to join the Zoom session. For more information or, if you need assistance downloading the Zoom meeting app, you may call the library at (845) 557-6258.

As part of a nationwide tribute to Justice Ruth Bader Ginsburg, memorial services were held at courthouses across the country this past Saturday night. People gathered at the Town of Highland Justice Court for a community memorial vigil for Justice Ginsburg.

Led by political activist, author, poet and actress Amber Tamblyn of Barryville who read a tribute poem she wrote and dedicated to Justice Ginsburg in 2005, the attendees expressed their collective feelings of grief and thoughts about Justice Ginsburg's remarkable accomplishments as the preeminent litigator for women's rights and minority and under-represented communities.

When asked about her own legacy, Justice Ginsburg said “To make life a little better for people less fortunate than you, that's what I think a meaningful life is. One lives not just for oneself but for one's community.” According to Justice Ginsburg three factors guided her legal career and that was the discrimination she experienced firsthand being Jewish, a woman and a mother. Several people at the vigil mentioned the significance of her death occurring during Rosh Hashanah-the Jewish New Year. According to Jewish tradition, a person who dies on the Jewish Sabbath is a “tzaddik” a person of great righteousness and even more so when it is on Rosh Hashanah.

Book critic Ruth Franklin explained in a recent interview that, “The traditional Jewish memorial expression may her memory be for a blessing” but in Justice Ruth Bader Ginsburg's case it says something else “May her memory be a revolution.”