JEFFERSONVILLE  — The couple walked into the cavernous old landmark in Jeffersonville and said “This is home.”

Husband and wife Davide Carbone and Elda Bellone of … 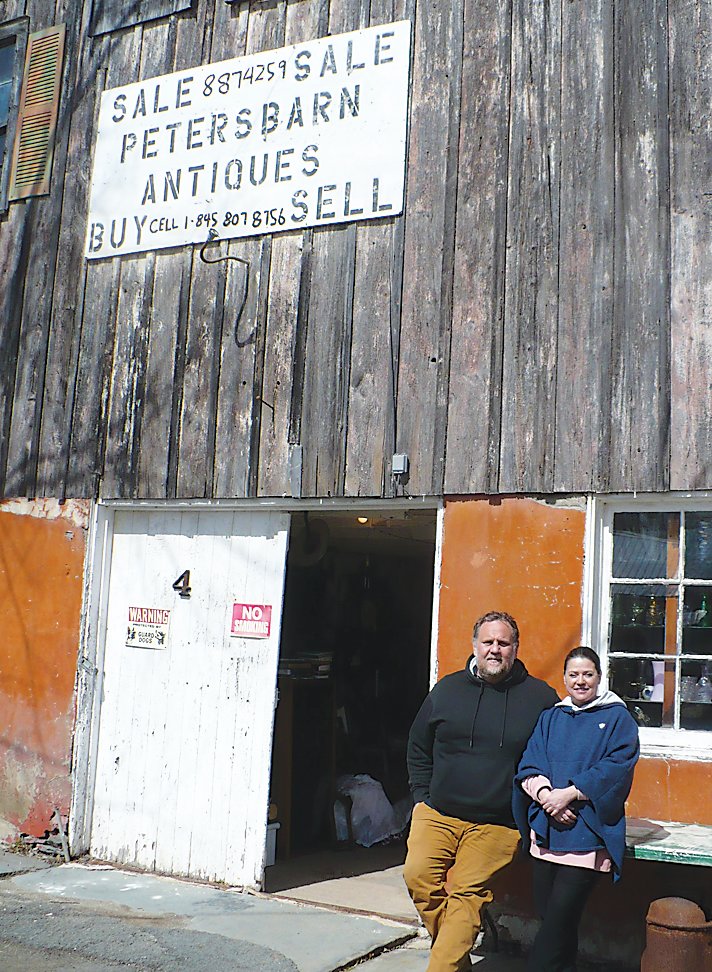 The landmark Peters Auction Barn in Jeffersonville has a new lease on life. Jeffersonville residents Davide Carbone and Elda Bellone, above, plan to restore the 1800s structure and open it to local businesses as well as their own.
Kathy Daley | Democrat
Posted Friday, April 22, 2022 6:43 am
Kathy Daley

JEFFERSONVILLE  — The couple walked into the cavernous old landmark in Jeffersonville and said “This is home.”

Husband and wife Davide Carbone and Elda Bellone of Jeffersonville are delightedly the new owners of the Peters Auction Barn on Center Street, across the street from the Sunoco gas station.

“We want to preserve this wonderful building and restore it,” said Carbone.“We plan to connect with local farms and businesses, particularly those who live here and share life here year-round.

“We’re thinking of farm-related programs, a dairy, a farm-to-table restaurant, a meat retail store. We are open to considering every opportunity. We welcome ideas. The potential is endless.”

Since 1954 the barn was owned by the Peters farming family, first by Russell Peters and then by his son Russell Jr.  Cattle and farm animals were auctioned off.

“I grew up with Dad (Russell Jr.) selling goats, chickens and rabbits by auction,” said Rosemary Peters, who lives next door to the auction barn.

As children, she and her brothers helped out in the ring while buyers and onlookers sat in the bleachers.

In later years, her father and mother concentrated on the non-animal sales. Goods ranged from double beds to toasters, original paintings to lawn chairs, from carpets to knives and forks to used books and record albums. Anything anybody wanted was there in the immense two-story structure that’s 30 feet wide and 200 feet long.

Russel Jr. said the barn was built in the 1870s. Later a farmer and cattle dealer named John Smith bought the barn. With the assistance of local kids, Smith drove the cattle on foot from Jeffersonville to the train station in Callicoon. From there, the cows went to slaughter.

Before the Peters family bought the barn, the building was owned and operated by the Sullivan Cooperative, which sold cattle.

Rosemary, who is retired from working three decades for Sullivan County, took over the Auction Barn a few years ago. Her parents are now in their 90s and she’s needed to care for them.

Fortuitously, said Rosemary, “I like the new owners a lot.”

Carbone and Bellone are originally from Italy. They moved to Brooklyn, N.Y. and then, during COVID, bought a year-round home in Jeffersonville and stayed. Their son is now in third grade at Sullivan West Elementary School.

“We love it here – this is the best thing that ever happened to us,” said Carbone. He owns a web-based business. His wife is an architect trained in historic preservation.

The Auction Barn at 4 Center St. was very likely built by a Swiss or German farmer, Jeffersonville’s earliest settlers. Carbone said the barn is stunningly like barns in Switzerland, which borders on the Italian village of his birth.

“This is a European barn,” he said, “with its gray color and stonework.”

What happens next for the sturdy old building?

“The idea is to first sell out the merchandise and then restore the building,” Carbone said.

The couple are skimming through the thousands of items to see if any pieces are of particular value. Everything else is up for sale.

“Make us an offer,” Carbone said. “We are motivated to make sales!”

Carbone noted that part of the restored building will go towards their own business, but they are encouraging any joint ventures or creative projects in the building – the caveat being that projects must be good for the community.