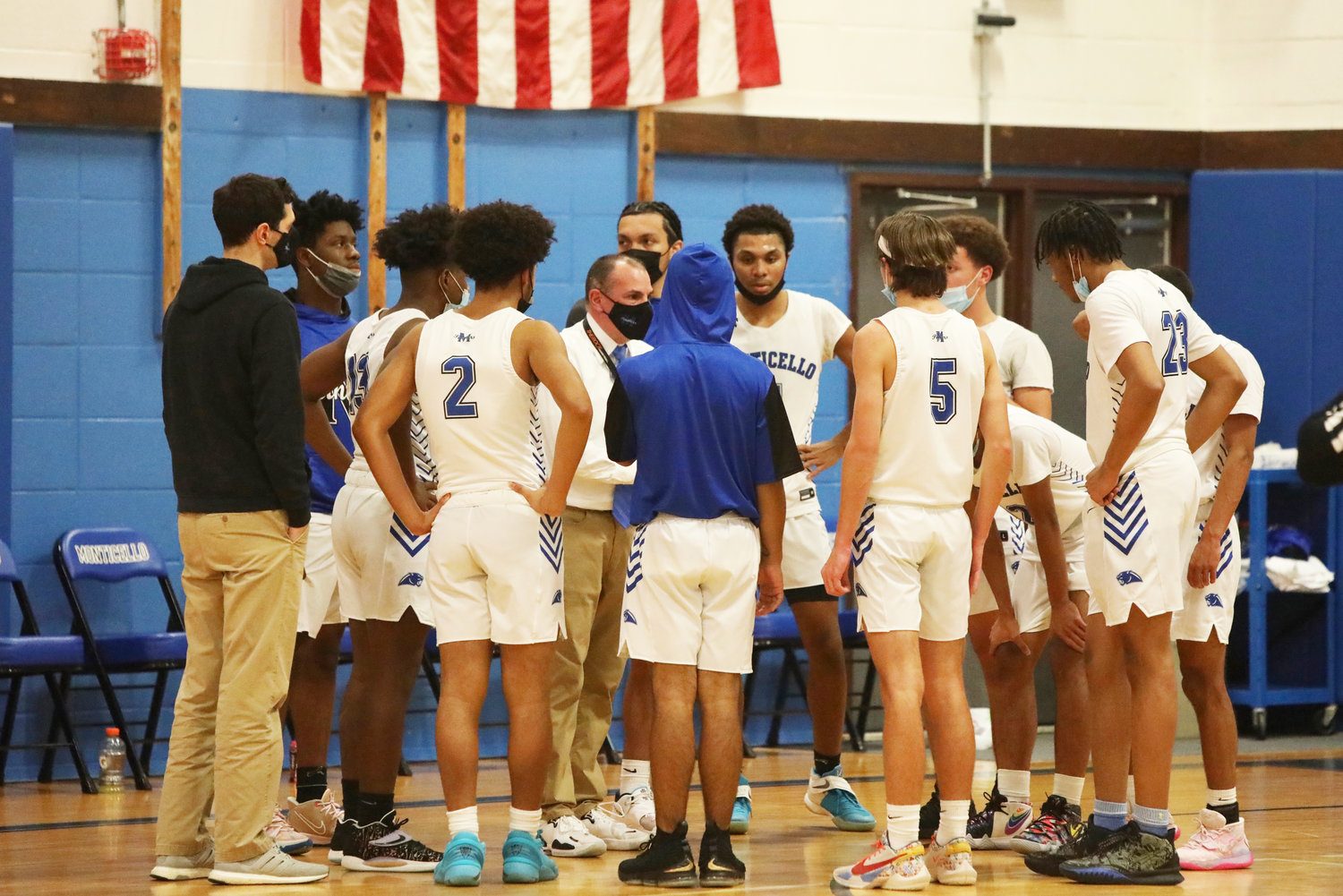 Coach Russo addresses his team during a time out. Known for his enthusiasm and emotion, Russo takes coaching to another level.
Richard A. Ross | Democrat 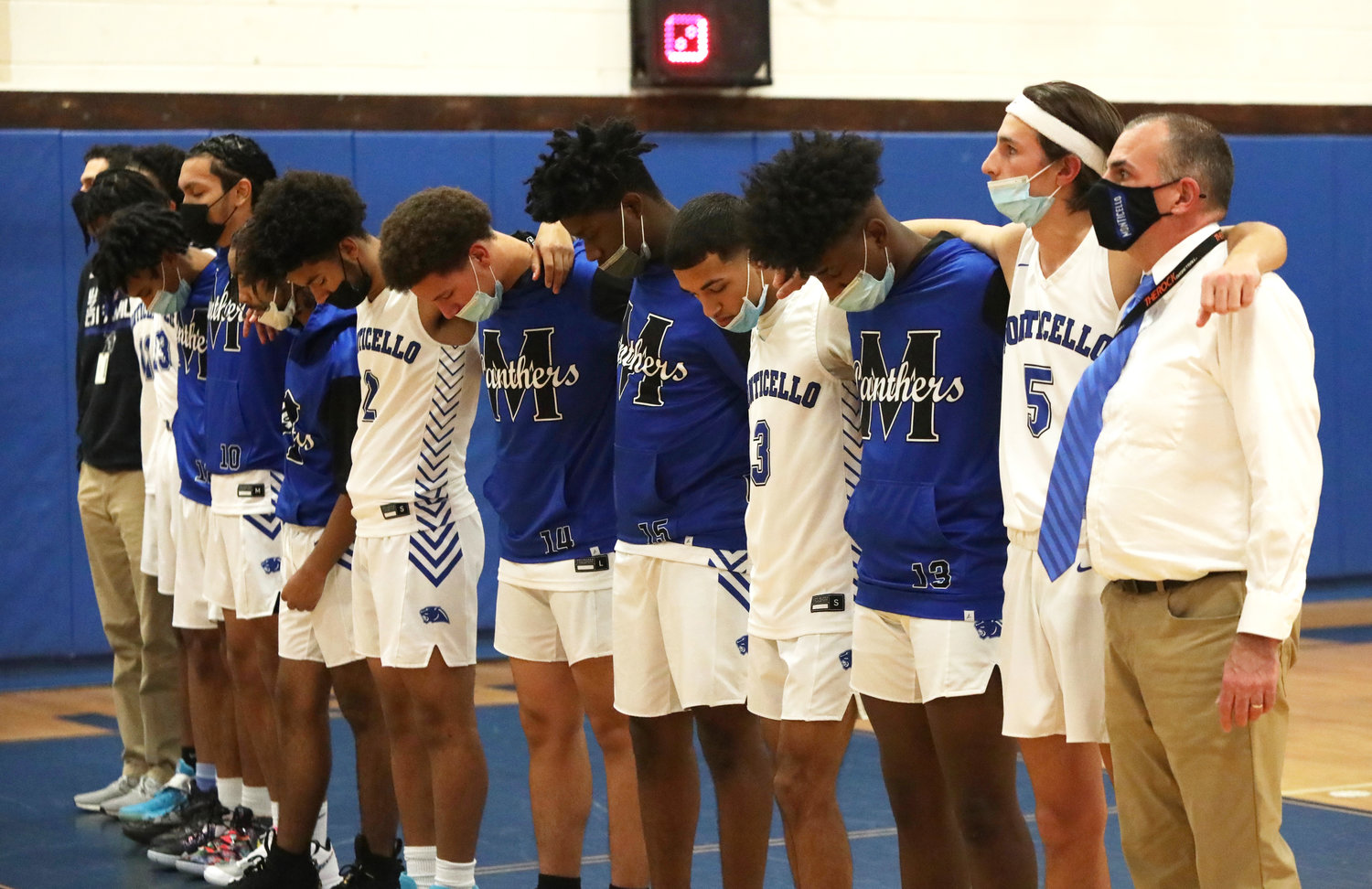 Monticello Coach Chris Russo regards his team as his family that also includes his son Joseph to his right.
Richard A. Ross | Democrat
Previous Next
Posted Tuesday, December 28, 2021 6:20 am
Richard A. Ross

MONTICELLO - “A good coach can change a game. A great coach can change a life.” When it came to expressing profound thoughts about basketball and life in general, UCLA Men’s Basketball Coach John Wooden never ran out of enduring maxims. For those coaches whose real interest is in helping their young charges to reach their full potential and go forth to become productive, compassionate and successful people, the mentoring of their players far exceeds the teaching about the strategy of the game.

Monticello Boys Basketball Coach Christopher Russo is cut from that die. Year after year, Russo approaches his coaching with all the verve of a man on a mission. That mission is not only to fuse his players into a cohesive and effective team, but also to build in them those attributes that will serve them long after their playing days are over.

His efforts have been well-documented and acclaimed by many, but just recently he received his most exalted recognition. Russo was named the 2020-21 New York Boys Basketball Coach of the Year by the National Federation of State High School Associations (NFHS).

Russo, who has coached for 13 seasons and accrued 116 all-time wins, has undertaken several philanthropic initiatives during his tenure at Monticello. The BCANY vs Cancer Classic, the Slam Dunk Games, the Jingle Ball Classic and the Monticello High School Awesome Alliance have used sports as a bridge to the community, raising money and supporting programs in the area.

But still, the honor took him by surprise. “It was wonderful. It was a surprise to receive the nomination, which was put forth by Roscoe’s Fred Ahart and Monticello Athletic Director Kurt Buddenhagen. It was even more gratifying that I was chosen. We don’t always have the most wins or necessarily have the best kids but we work very hard. I think the recognition is a tribute to the things we try to instill in our kids.”

To his players, Russo is so much more than a coach. He is teacher, a guide, a friend, a mentor, an advocate and a tireless devotee to the game. For the young men who enter the realm of Panther basketball, it is a life-altering sojourn. Russo’s methodology forges team chemistry, marshals character, unity, friendship and a sense of shared responsibility.

His mantra to his team centers around what he defines as the three ‘E’s: “energy, effort and execution.” When applied to the challenges of the hardwood, those three aspects are harbingers for success. When applied to life in general, they form a preamble to giving one’s all no matter what the challenge or circumstances. Among the throngs up in stands at Monticello’s vibrant home games in “The Pit,” are young men from across the years who come not only to see the team they played for, but to also remember and pay tribute to the coach that reached into their lives.