LIBERTY – For the second consecutive season, Monticello and Liberty met at the conclusion of their scheduled slate of 11-man football games, with each team looking for their first win of the … 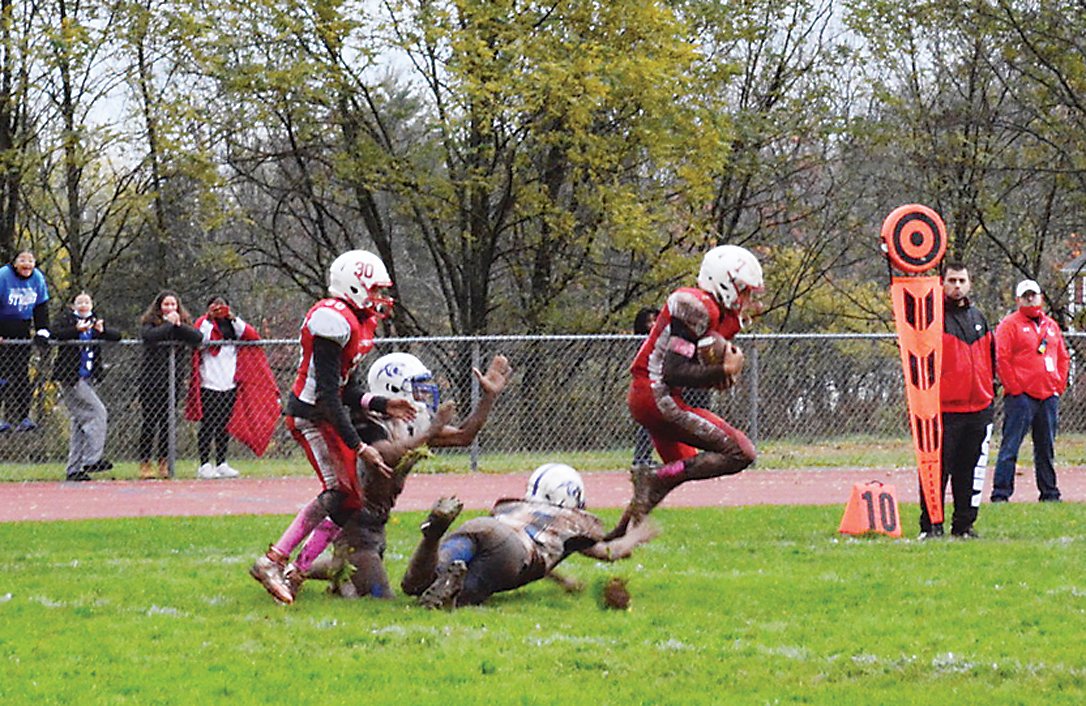 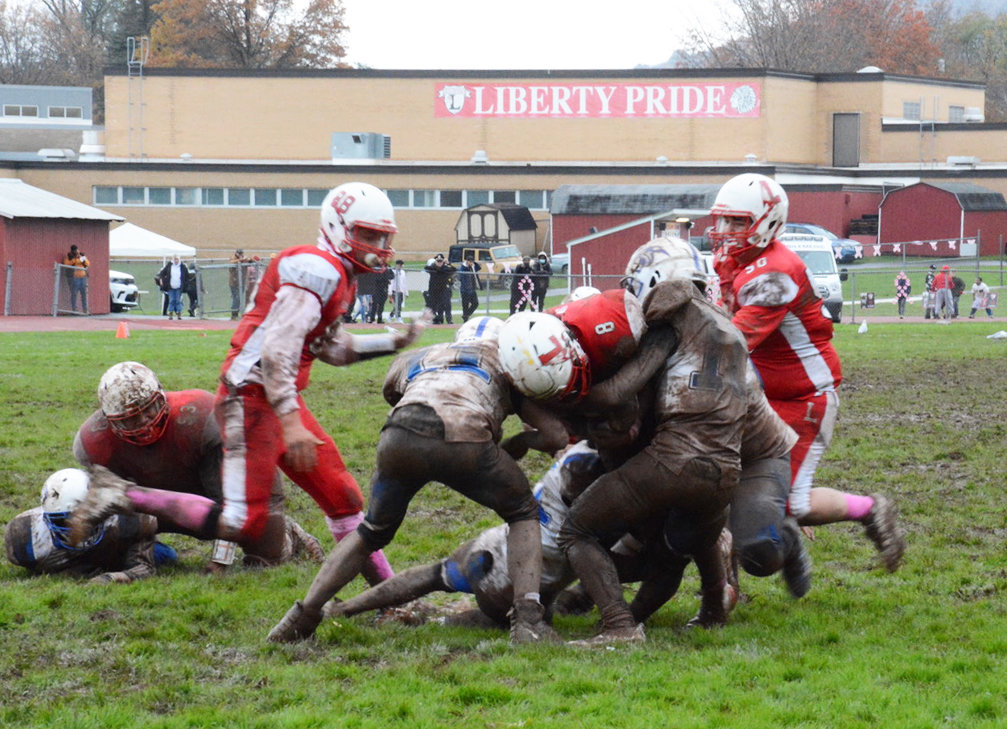 Coles’ world! Shaun Coles had a big night for the Indians. Here, multiple Monticello defenders look to stop his momentum. He rushed for 102 yards and had a 22-yard TD run in the game.
Joseph Abraham | Democrat 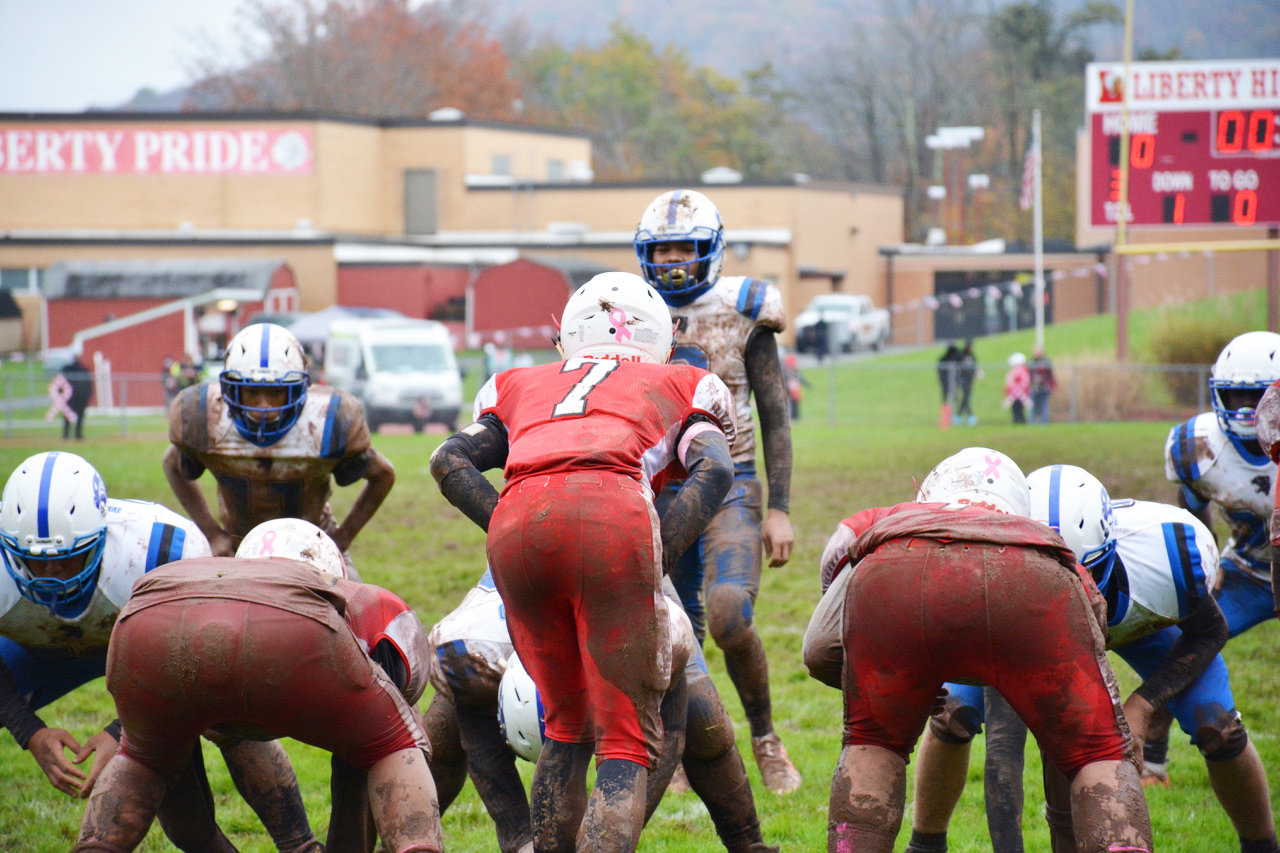 In the first OT period, the Panthers pushed the ball inside the five-yard-line. But the Indians had a successful goal line stand, forcing a Monticello turnover on downs.
Joseph Abraham | Democrat
Previous Next
Posted Tuesday, November 2, 2021 6:20 am
Joseph Abraham

LIBERTY – For the second consecutive season, Monticello and Liberty met at the conclusion of their scheduled slate of 11-man football games, with each team looking for their first win of the year.

While you might not think a game of winless squads would be the most entertaining, these two teams delivered a highly competitive double overtime contest on Saturday, with the hometown Indians pulling out the 14-6 win.

Both defenses held each other scoreless in the first extra session, but a Tanner Bury quarterback sneak, followed by a two-point conversion by Giovanni Dudley, gave Liberty an eight-point advantage. The Indians’ defense stepped up once again when Monticello had the opportunity to respond. A Monticello pass was picked off by Ethan Werlau, earning Liberty the victory and some payback, as the Panthers won last spring’s showdown.

“It means the world to me and to the seniors,” said Liberty Coach Adam Lake on the win. “We had a good game last year, but lost to Monticello. We knew the last game of the season was against Monticello again. We kind of viewed it as a revenge game. They played very well. We took it to double overtime, and both teams played hard. These guys, they stuck to just playing football, and good things happened today.”

Monticello started the scoring in the third quarter, as a blocked punt gave them the ball inside Liberty’s 10-yard line, and shortly after Quenten Liciaga ran in for a Panthers’ TD. Liberty responded in the fourth quarter, with Shaun Coles taking off for a 22-yard TD run. Coles had 102 yards on 15 carries for Liberty.

While football and Homecoming festivities were a large part of the day, something bigger was also at play. Many fans were dressed in pink, as Liberty used the game as an opportunity to raise awareness about Breast Cancer, as well as raise money for Ride2Survive. NYS Senator Mike Martucci stopped by with his daughter Catherine.

The scheduled slate is over, but it is possible these teams will be in action in Section 9 crossover games next week. Visit section9sports.org for an updated schedule as the week progresses.