LAKE HUNTINGTON - A wildfire swept through the Sullivan West gym Tuesday night, burning everything in its path. And when it was done, there was no one present who could deny its devastating impact. … 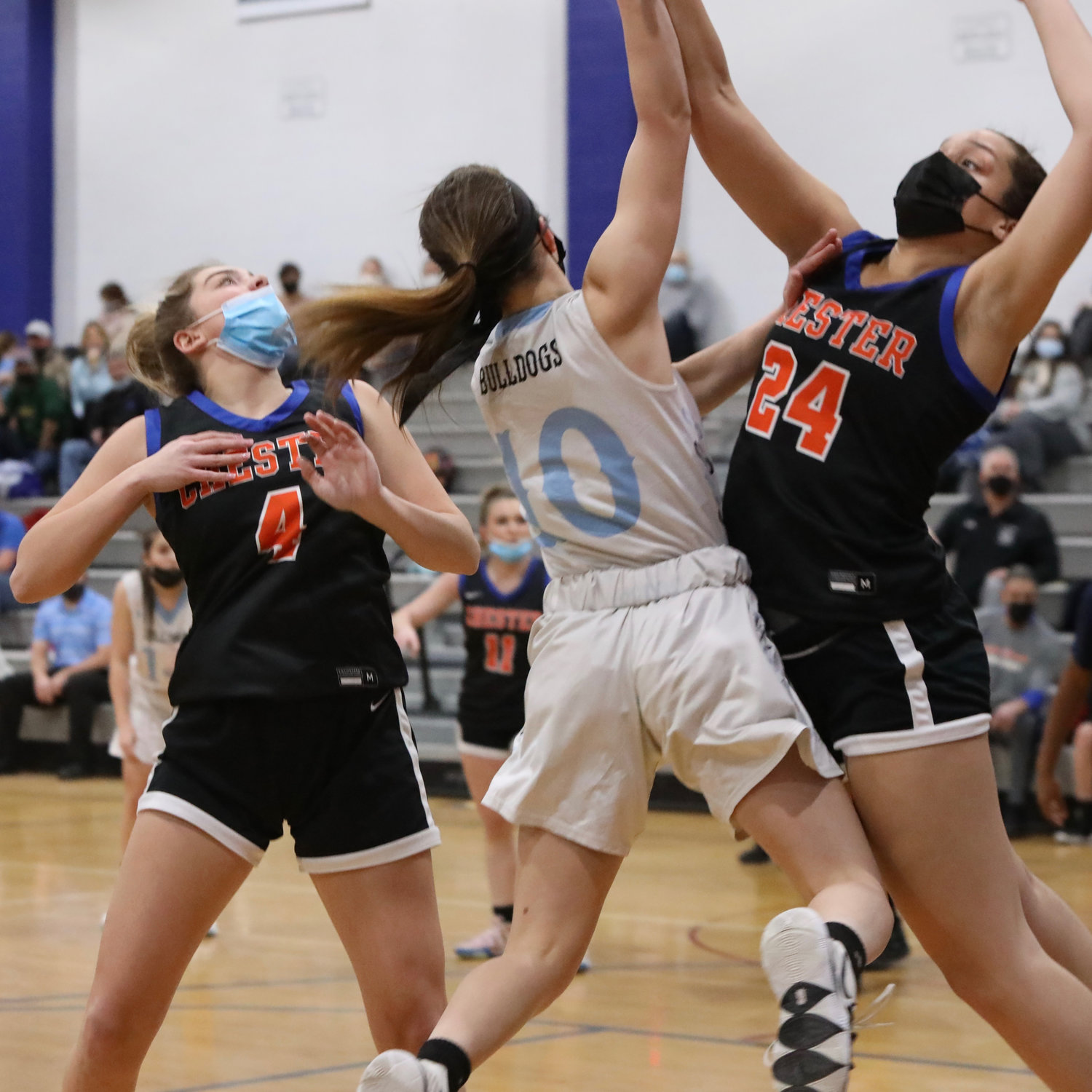 There were no easy runs to the rim. Every attempt was met by staunch defense as Grace Boyd discovered by being fronted by Allison Bono and Trinity Delgado. Trapping caused more than 20 first half turnovers, so even getting the ball down the court became problematic.
Richard A. Ross | Democrat 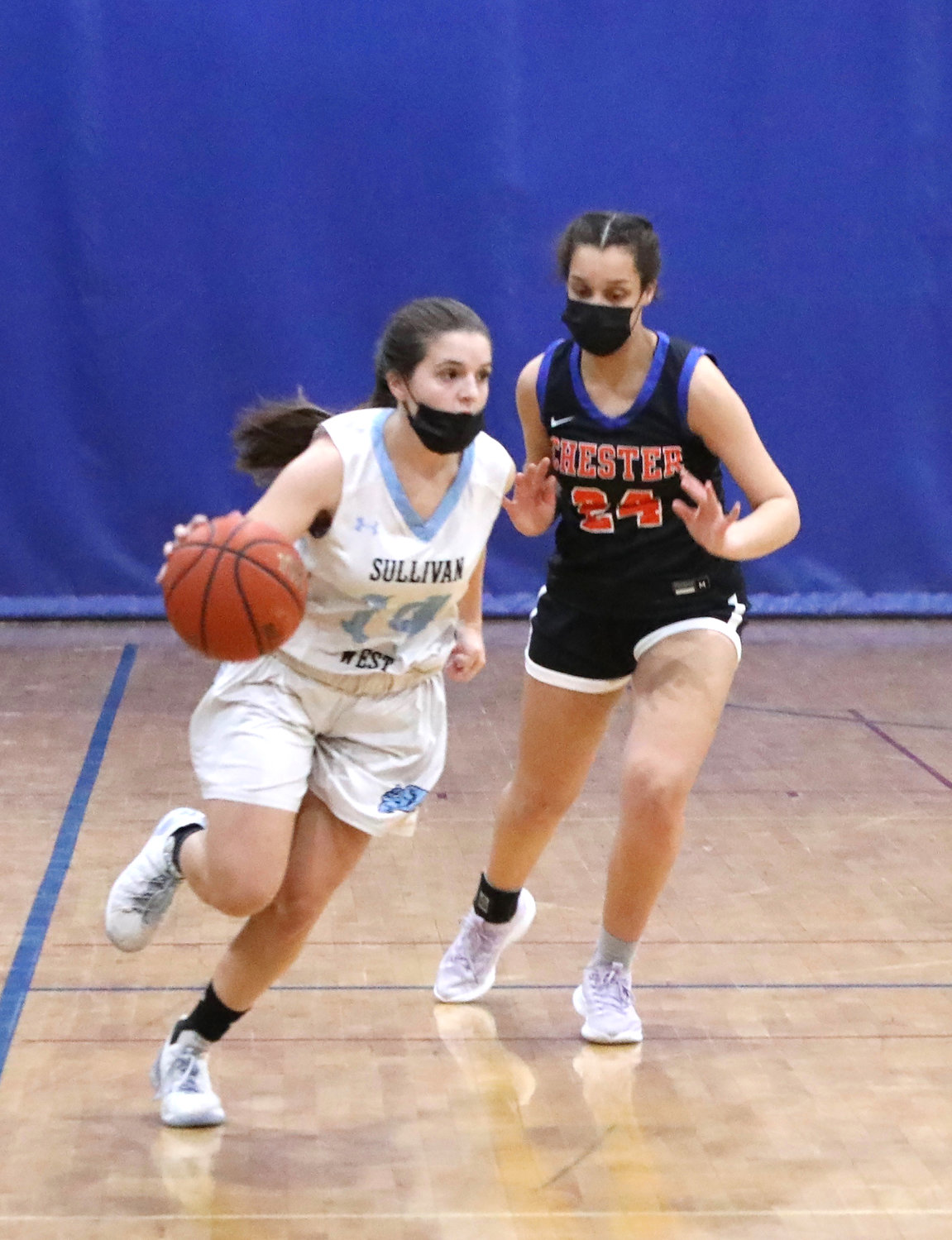 Senior point guard Brielle Arnott dribbles by Chester’s Trinity Delgado. Chester’s defense proved overpowering for the Lady Westies. Arnott and her two other leading scorers in Riley Ernst and Taylor Wall were collectively held to 12 points on the night. Arnott had virtually no open looks for her patented threes.
Richard A. Ross | Democrat
Previous Next
Posted Friday, February 11, 2022 6:20 am
Richard A. Ross

LAKE HUNTINGTON - A wildfire swept through the Sullivan West gym Tuesday night, burning everything in its path. And when it was done, there was no one present who could deny its devastating impact. That conflagration was the Chester Lady Hambletonians, who resoundingly put to rest Sullivan West’s dreams of redeeming their early season 41-19 loss down in Chester, by dint of a one-sided 49-20 league victory. Simply put, the Lady Hambos smothered the Lady Westies with a defense that pressured, trapped and essentially took away all their weaponry that has heretofore marshaled success in their impressive season to date.

Used to the lukewarm waters of most of this season’s adversaries’ defenses, Sullivan West suddenly found themselves steeped in a swirling hot cauldron. Their tried-and-true modus operandi, to get the ball down low to Taylor Wall and Riley Ernst by attacking the basket, coupled with the dangerous perimeter shooting of Brielle Arnott, was demonstrably thwarted by Chester’s commanding man-to-man defense.

Junior Allison Bono showed her prowess as an in-your-face defender, tipping passes, getting steals and evincing deft moves through the lane to score. Sullivan West’s defense was ineffective against the Chester onslaught which brought an array of shooters to compliment Bono’s theatrics. By the end of the night, six treys had rattled through the rim, attesting to the Lady Hambletonians’ ability to score from anywhere. Their crisp, rapid fire passing around the perimeter dictated by point guard Bono was an effective antidote for the Lady Dawgs pursuing zone.

Both teams duked it out in the early going with the score at 2-1 for a segment before the water began to simmer and then boil. By the end of the first quarter, two things were already manifest. Bono was going to be a lot to handle, and the trapping and body-close Chester defense would totally disrupt the Bulldogs’ rhythm. The first quarter ended with a Chester 16-5 lead. Then it got inconceivably hotter as the Lady Westies scored just two points in the second frame to Chester’s 17 to signify a 33-8 margin at the half.

The normally vociferous Dawg Pound became muted as the rabid fans looked at how this game was unfolding. Veterans of gone-by sectional clashes and some of those fierce contests, looked on with remembrances of what championship basketball looks like. Chester is slated for the two-seed in the upcoming postseason with daunting unbeaten Millbrook as the one. For the Lady Westies, the agenda is to avoid either in the first round. A rematch rubber game with Seward is a distinct possibility as both could end up 3-3 in the division with the overall records deciding which one would play host to the other. But none of that is written in stone yet.

Chester began to take its foot off the gas in the third period marshaling a 45-14 lead heading into the fourth quarter. Sullivan West coach Pat Donovan got to see how his bench would manage and got impressive minutes from Georgeanne Cardona, Taylor Brustman, Felicity Bauernfeind, Kaylee Dibiase and Mia Nunnari. Chester coach Lindsay Rock also sat her starters and consequently the game took on a different caste. The Bulldogs outscored Chester 6-4 in that last segment. Sullivan West fell to 8-4 (1-2), while Chester remained unbeaten in league play at 5-0 with an overall mark of 14-3. Their only losses being an overtime hiccough against O’Neill, a dicey one-point loss to Section I Class A Nyack and a defeat versus Class AA Pine Bush.

Coach Rock summed up her team’s success. “My whole philosophy is about defense. Our entire game is based on that. I tell the girls, when you see an opportunity, go trap. If someone turns, another defender should meet them.” Chester will further sharpen its edges until sectionals. With their last league game coming against Seward in the final week, Rock will take her team against Class AA Valley Central, Class A New Paltz and for the icing on the cake, a trip to Rutherford, NJ to face St. Mary’s minus the shot clock.

SW coach Pat Donovan knows he has to go back to the drawing board and averred that the loss was on him. “I have to prepare them for this. We played scared.”

It’s hard though to simulate that kind of opposition in practice. Truly, only games can provide that real-time experience. The Lady Westies are now 8-4 (1-3). They aspire to beat Tri-Valley twice to balance that league ledger.