FALLSBURG –– When the Liberty Lady Indians’ softball met Fallsburg on May 18, the two teams had one win between them. Liberty had defeated Fallsburg on the opening game of the … 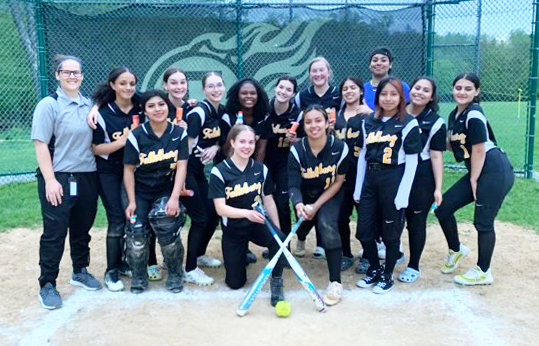 The Lady Comets celebrate after finishing their season with a 32-31 win over rival Liberty. It was the school’s first varsity softball win in over five years.
Contributed photo
Posted Tuesday, May 24, 2022 5:22 am
Game stats

FALLSBURG –– When the Liberty Lady Indians’ softball met Fallsburg on May 18, the two teams had one win between them. Liberty had defeated Fallsburg on the opening game of the softball season. No one could predict, however, what would happen this warm day in late spring.

After a scoreless first half of the first inning, the Comets batted around in the order to score seven runs in the bottom half of the inning. After that, the runs seemed to come in alternating bunches, with lots of walks sprinkled with timely hits. By the seventh inning, well over three hours after the game’s first pitch, Fallsburg had built a lead of six runs (32-26), and Lady Comets’ starting pitcher Alyssa Mahler was still in the game.

She got the first two outs easily with pop ups to shortstop Ally Perna. It looked like the game was over. But not this game, not this day. The Liberty Indians, the team with one win all year, was not about to give up. Slowly, several batters in a row reached base, and it was obvious to Fallsburg Coach Vanessa Marsilio that Mahler was really worn out from 6 and 2/3 innings and pitching for over three hours. Third baseman Kaitlyn Cross came into pitch. She walked in two runs. Then Cassandra Rose walked in two more runs.

With the score 32 to 31, it looked like the Liberty comeback would send the game into the bottom of the seventh with just one more run with the bases still loaded. The next batter hit a hard groundball right at third baseman Cross, who grabbed the grounder and stepped on third base for the final out.

The Fallsburg softball win was the program’s first in over five years. In the words of the field umpire, “This was the most exciting game of his career!”

During the handshake line, you could feel the exhaustion of all the players and coaches. All the players knew that this was an unforgettable experience. It sounds like a cliché, but truly both teams were winners.

Normally, Coach Marsilio gives out a game ball after each game. After this game, every member of the team signed one game ball that was placed in the Fallsburg High School Trophy Case.
As Marsilio said to the players, “We could not have won without the whole team!”