The Irish spirit was on full display up and down Main Street in Jeffersonville on Saturday for the 10th annual Saint Patrick’s Day Parade.

Hundreds of people lined the sidewalks and in front … 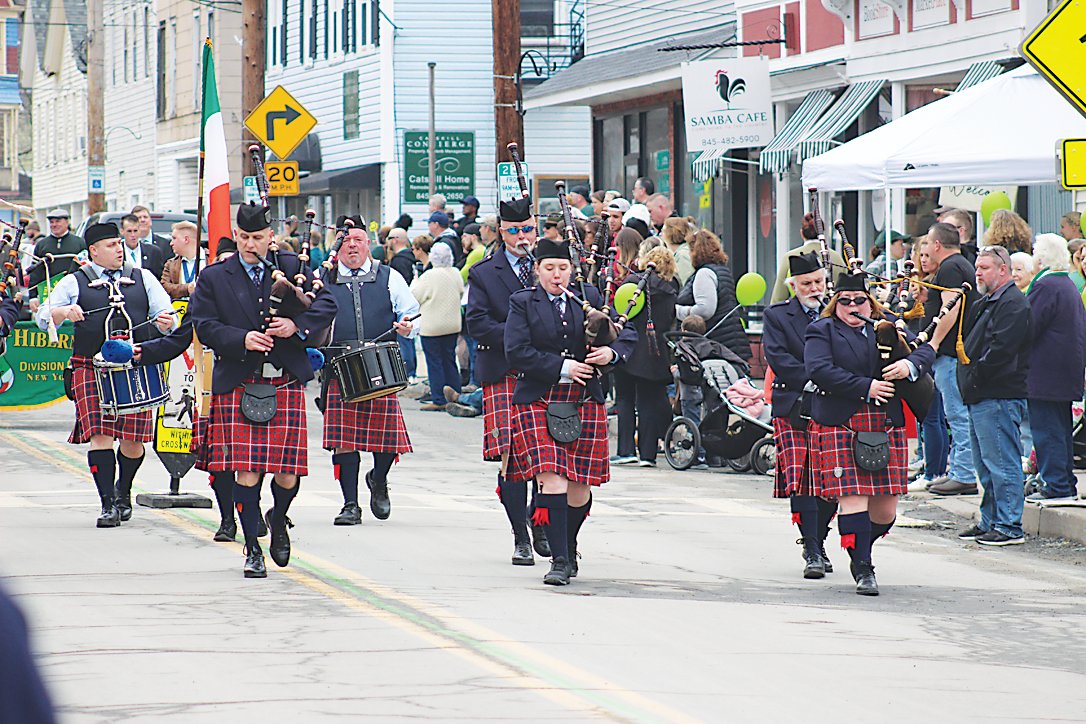 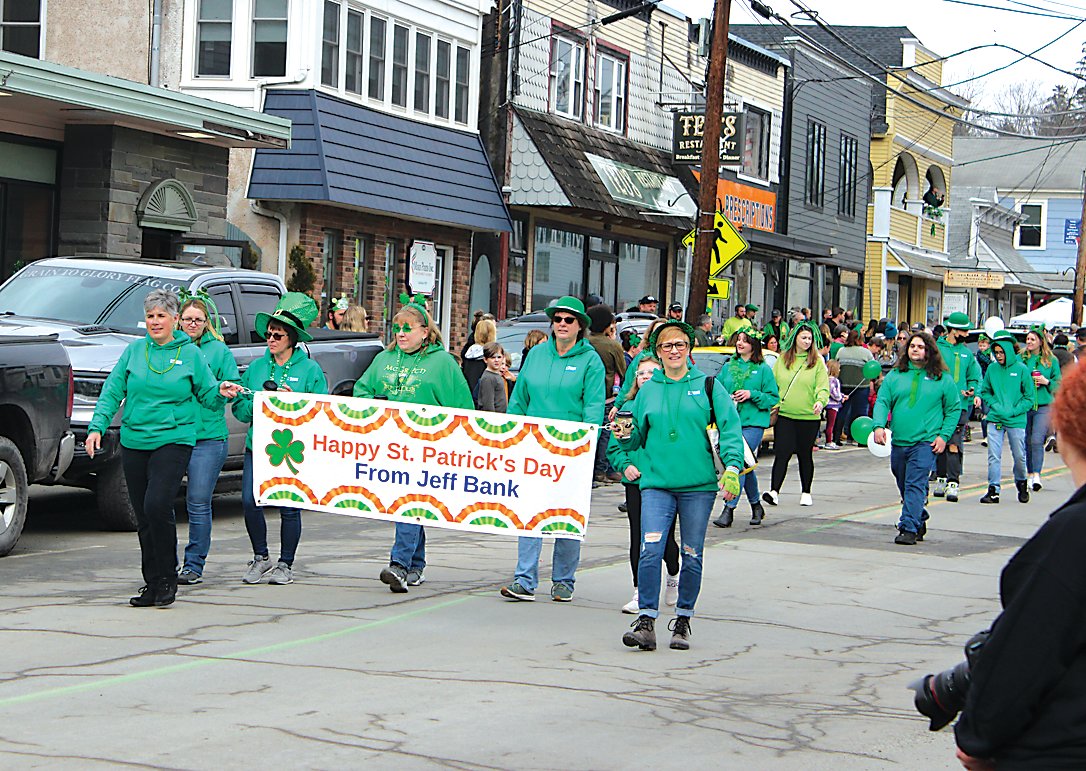 Employees of Jeff Bank, one of the parade’s sponsors, proudly wore their green.
Matt Shortall | Democrat 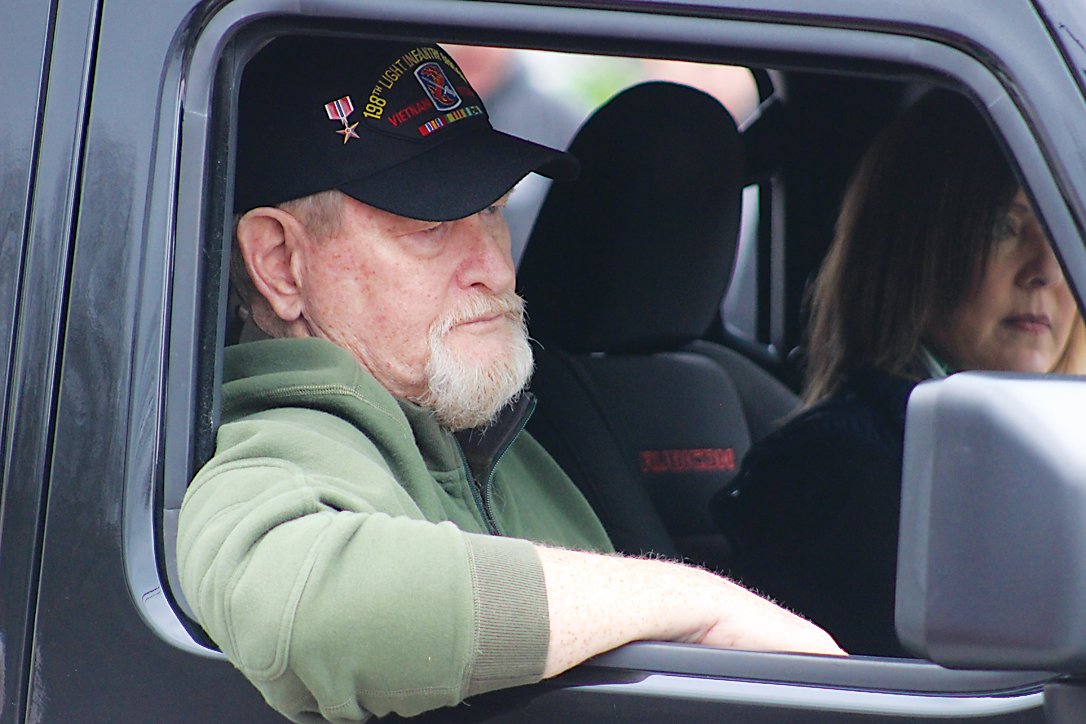 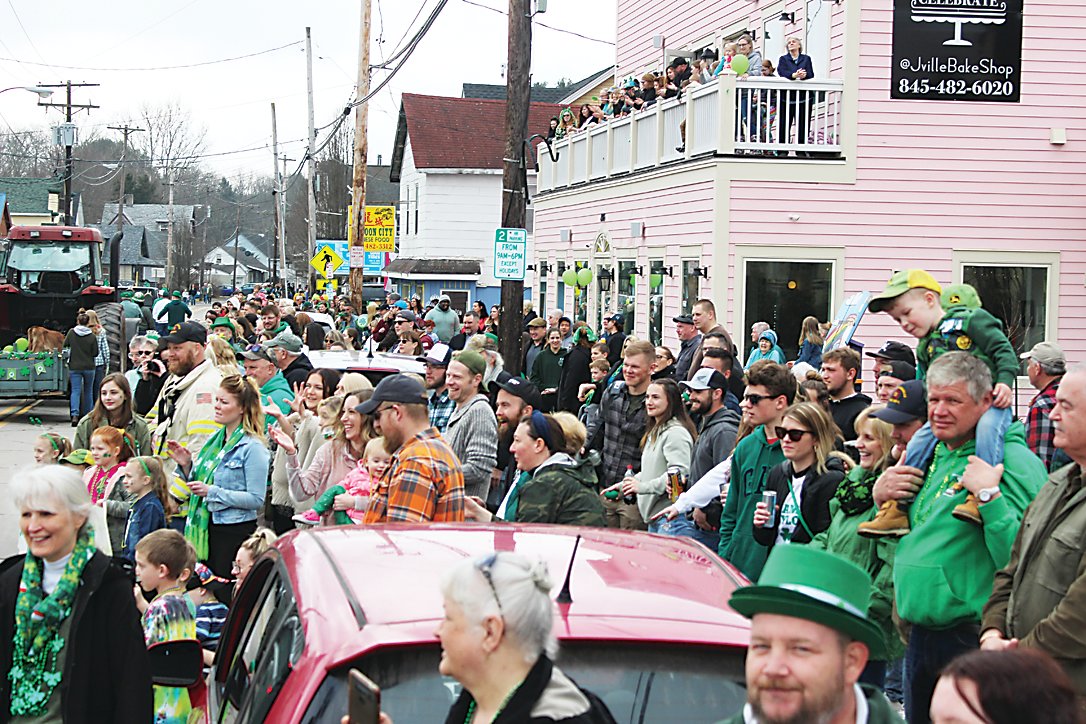 Hundreds of people turned out along Main Street in Jeffersonville on Saturday for the tenth annual Saint Patrick’s Day Parade.
Matt Shortall | Democrat 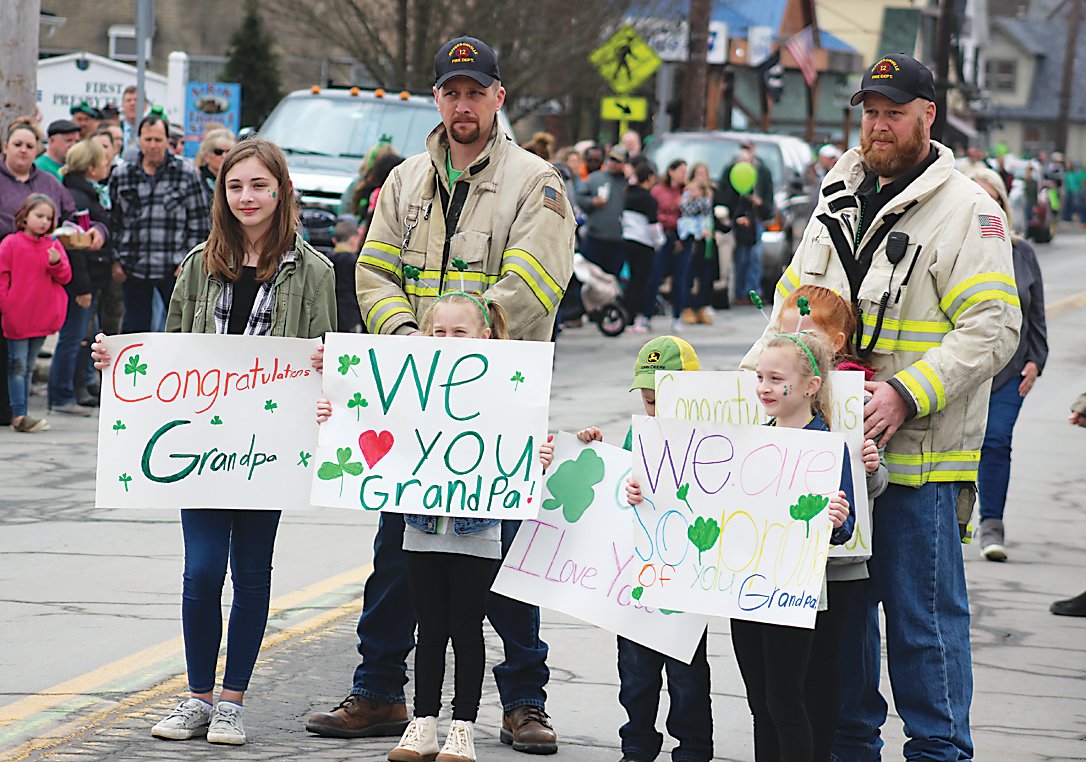 Parade Grand Marshal Lee Mall was cheered on by his family, including sons Jonathan and Joe, as well as grandchildren Sara, Lily, Claire, Olivia and Wyatt. The Malls are Chief and Assistant Chief of the Jeffersonville Fire Department.
Matt Shortall | Democrat 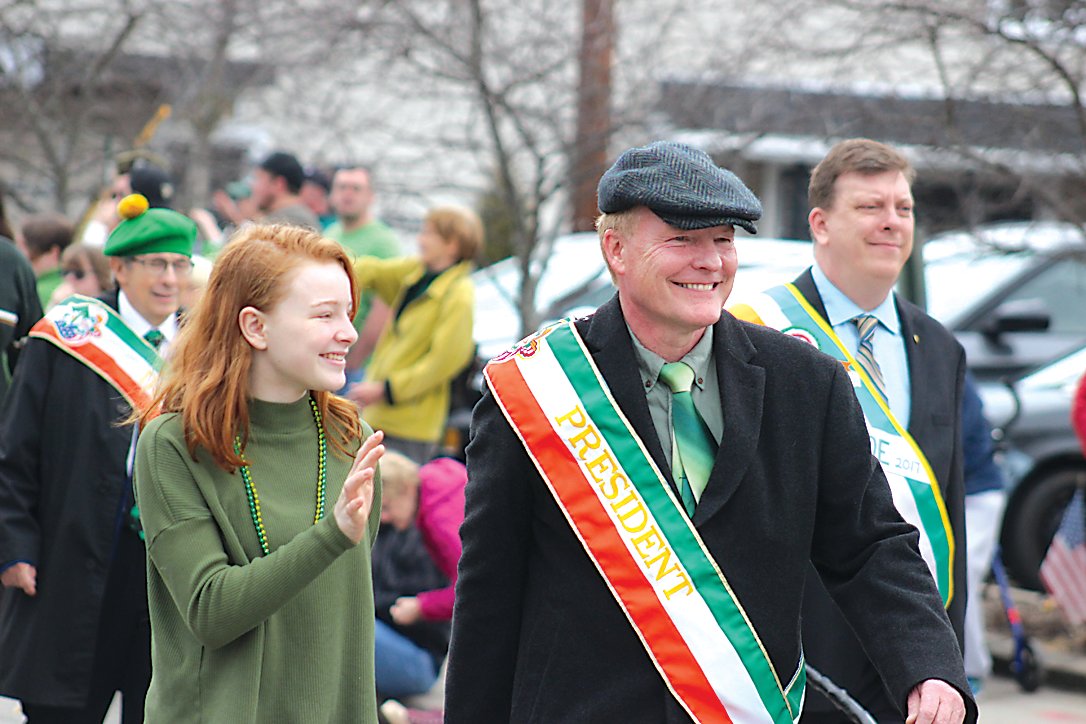 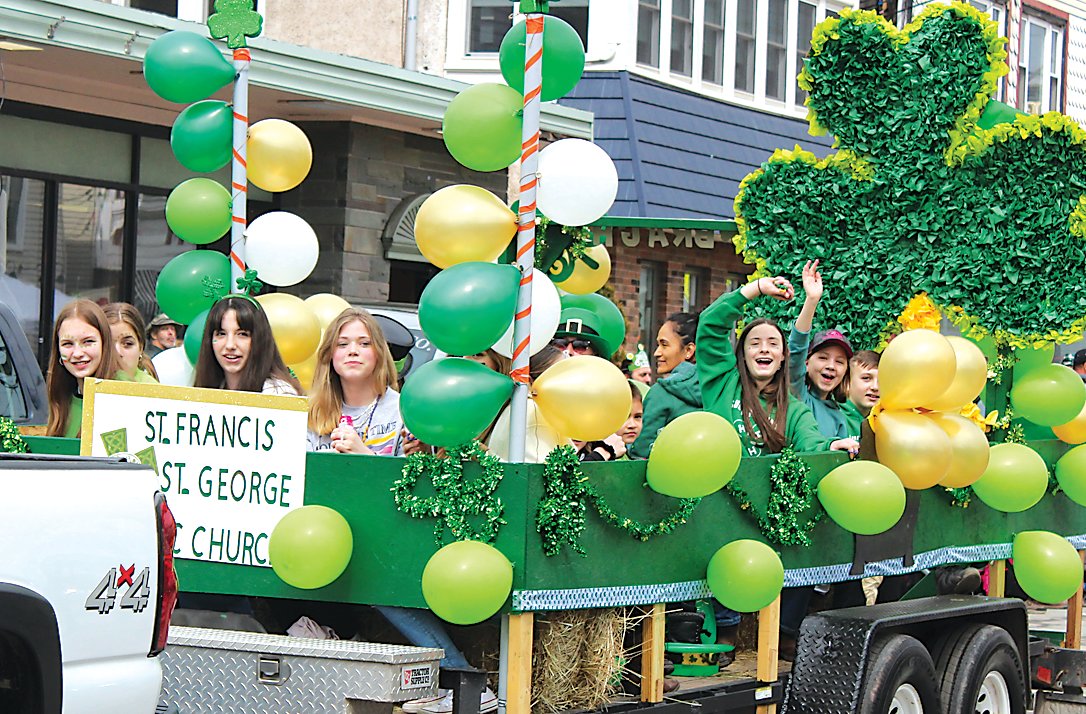 The church of St. George-St. Francis was one of the many skillfully decorated floats.
Matt Shortall | Democrat
Previous Next
Posted Tuesday, March 22, 2022 6:10 am
By Matt Shortall

The Irish spirit was on full display up and down Main Street in Jeffersonville on Saturday for the 10th annual Saint Patrick’s Day Parade.

Hundreds of people lined the sidewalks and in front of storefronts to see the marchers, parade floats, tractors and fire apparatus all decked out with green and shamrocks.

“On behalf of the Ancient Order of Hibernians Sullivan Brothers, Division One, we’d like to thank everyone for coming out today,” said JP Graham. “We’d also like to thank all of our donors and local businesses in the community who help make this parade happen.”

Returning this year were the Firefighter McPadden Pipes and Drums. Based out of Goshen, the band was founded in honor of FDNY firefighter Robert McPadden who died in the line of duty on September 11, 2001.

This year’s parade was in honor of Grand Marshal Lee Mall, the U.S. armed forces, first responders and essential workers.

A moment of silence was held before the parade began “to honor all the great Americans who have made the ultimate sacrifice for our nation and [to honor] loved ones lost during the pandemic. We shall never forget,” said Graham.

Parade Grand Marshal Lee Mall is a Callicoon native and U.S. Army veteran. A long-time local businessman, Mall is a recipient of the Bronze Star and Purple Heart for his courageous service during the Vietnam War.

“Lee’s devotion to his family, community and country is made clear by his actions, not his words. He is the very definition of the word ‘humble’ and proves everyday that no matter how many obstacles are thrown at you, it is how you persevere that defines you,” said Moloney.