It is with great sorrow to announce that Joanna Dean, age 76, died peacefully, with family, at her new home in San Juan Cosala, Jalisco, Mexico at 5:29 AM on October 14, 2021.Joanna was the sixth … 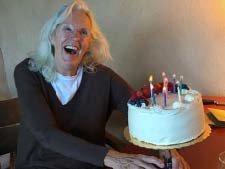 It is with great sorrow to announce that Joanna Dean, age 76, died peacefully, with family, at her new home in San Juan Cosala, Jalisco, Mexico at 5:29 AM on October 14, 2021.
Joanna was the sixth sibling of Charlie and Josephine Smith. She is survived by and was an admired step-mother to step-daughters Laura Dean and Melissa Dean of Denver, CO.
She was a loving sister and sister-in-law and she is survived by her brother Chuck Smith and sister-in-law Margie of Manchester, New Jersey, her sister-in-law Peggie of Brick, New Jersey, her sister Mary Ellen Kuttner and brother-in-law Frank of Livingston Manor, New York, and her sister Charlene Cohen and brother-in-law Alan of San Juan Cosala, Jalisco, Mexico. Joanna was predeceased by her sister Connie Crews and brother-in-law Fred of Sharpsburg, GA, her brother John Smith of Brick, New Jersey, and her sister Barbara Conley and brother-in-law Howard of Equinunk, PA. She is survived, as well, by her many loving nieces and nephews, Steve Crews, Butch Crews, Billy Crews, Valerie Smith, Patrick Smith, Michael Smith, Tom Smith, Allison Fisher, Andy Smith, Chris Conley, Caty Cook, Tony Kuttner, Frank Kuttner, Francine Kuttner, and Eric Knesz. Joanna was predeceased by her nieces Charlene Beierschmitt and Eileen Trombly.
Joanna was a friend to many, wherever she had lived. She was born on the Jersey Shore and grew up in the Catskill Mountains of New York State in towns which included Walton and Roscoe. She then traveled from Roscoe to New York City and then to Sedona, AZ, to Equinunk, PA, and back to the southwest to Santa Fe, NM, before her great adventure to her final resting place in San Juan Cosala.
In Sedona, she was masterful in running her catering operation. Additionally, Joanna acted as a caregiver for those in need including caring for her mother Josephine in Joanna’s home in the last year of Josephine’s life.
Joanna had a passion for cooking and, although her diet would not allow her to indulge as she once had, she still loved to cook for and entertain her friends and family with her meals. In her younger years, she loved to hike and to travel. She loved to garden and was widely known locally in her pueblo of Pojoaque, just outside of Santa Fe, for her field of sunflowers, which she grew right outside of her front door and shared with the local community. Always a giver.
Joanna valiantly fought Multiple Myeloma for eight difficult years. Her talents, while too numerous to mention, gave new life and meaning to everything and everybody who came into her orbit. She had a quick and pensive mind, always reflecting. Joanna, a true force of nature.
Joanna lived life the way she wanted to. There was no other way that would have worked for her. In the same fashion, her life ended in the way Joanna wanted it to end, in her own bed, with her caregiver nearby and surrounded by her family, her sister Charlene, her brother-in-law Alan, and her nephew Eric Knesz. She will be missed by all who knew her.
Donations in Joanna’s honor can be made to the Multiple Myeloma Research Foundation, https://themmrf.org/get-involved/ways-to-donate.