When you talk about legends in the sport of golf you can certainly include the name of the late Jean Knickerbocker of Roscoe. 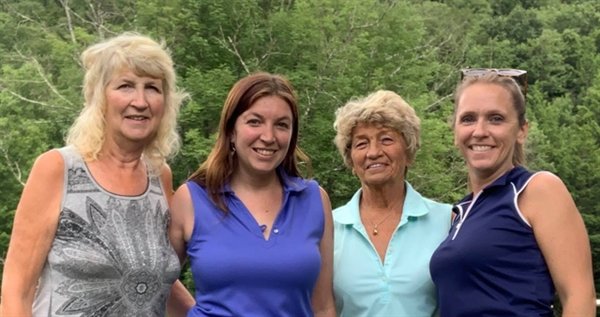 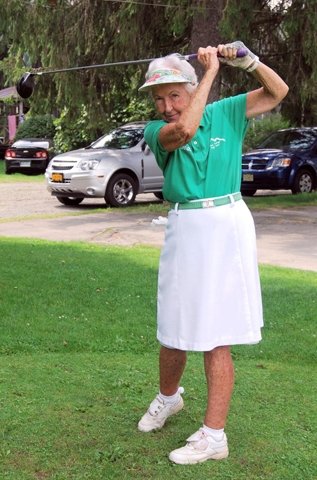 When you talk about legends in the sport of golf you can certainly include the name of the late Jean Knickerbocker of Roscoe.

When we asked the present managers of the Roscoe Twin Village Tuesday Night Ladies league who started the league, Jean's name was at the top of the list.

The present league today is at least 50 years old and is now managed by Anna May Husson and Becky Ackerly. They have managed the league for about 15 years.

This league presently has nine two-member teams and they use a shotgun start each week with teams starting each week from a different hole.

The league managers noted that the league uses a 23-point scoring system and that the teams are very well balanced with both new, young and seasoned veterans.

Champions of the league last year were Cheryl Bowers and Shannon Feeney with second place being won by Anna May Husson and Becky Ackerly.

Fans of Tiger Woods are delighted to know that the golf maestro will be in action at the Memorial Tournament in Dublin, Ohio. It will be the first PGA Tour event in five months for the 15-times major champion. He has confirmed his participation via Twitter. He is apparently ready to get back into wielding the club. “I've missed going out and competing with the guys and can't wait to get back out there," is how he put it.

The game is one of concentration coupled with a high level of physical fitness. These include perfect eyesight, stamina, and flexibility of the limbs and back. The last appearance of Woods was at the PGA Tour in mid-February.

It was the Genesis Invitational where he failed to leave any lasting impression.

The 44-year-old Tiger Woods is the reigning Masters champion. However, he had to cut down on his game because of health issues related to his back. Subsequently, the Covid-19 hiatus started in the middle of March. The Master preferred to sit out the circuit's first five events since the break. Of course, he did participate in a charity match on 24 May. It was with fellow golfer Phil Mickelson, and Super Bowl-winning quarterbacks Tom Brady and Peyton Manning.

The master golfer Tiger Woods needs one more win to reach a record-breaking 83 PGA Tour victories. His next game would be the Memorial Tournament at Muirfield Village.

It is one of the most high profile, non-major events on the PGA Tour. Tiger Woods has won it five times, setting a record. The last time he won was in 2012.

Woods will have to compete with equally competent golfers. They would include names like Rory McIlroy, Phil Mickelson, Bryson DeChambeau, Dustin Johnson and Sergio Garcia.

The tournament runs from July 16-19, and there were plans to restrict the number of spectators. However, because of COVID-19, the PGA Tour has decided to scrap such plans. Obviously, the players will have to perform without fans, and only the golf course will be witness to the skills of the individual golfers.

For A Better Game

We all have different ways of doing things on the golf course, which is why one technique or strategy might work for one person but not another.

For example, some of us will visualize the shot we want to hit in our mind, because it helps us execute the shot. For others, they have to experience the shot.

With that said (or written in this case) it never hurts to try something new.

So here are several “pep talks” you can create to help build your confidence for the next round.

After each round of golf, take 60 seconds to sit quietly and replay three best shots of the round. Visualize them in slow motion and lock every detail into your memory. They'll come back to cheer you on in the future.

Tell someone about your best shot of the day, but never talk about your worst shots. Professionals can usually remember every shot during a tournament, but there is one shot they “just don't recall”.....it's their worst shot. Let the bad shots go, and never ever talk about them.

After every shot, remember to say, “great shot” and mean it when you say it. The results may not be exactly what you wanted, but the ball went where you hit it. So go do it again.

Breathe before every shot or putt, remember to breathe deeply and softly. It will relax your body and allow you to focus on the task at hand.

Make it a part of your pre-shot routine to consciously expect a great shot. As you pull the club from your bag, smile. As you look down the fairway or line up your putt, smile. As you stand over the ball, smile. Expect the best.

Finally, but perhaps most importantly, have fun out there. Golf is a game. Yes, it can be very challenging and frustrating at times, but it is intended to be a form of enjoyment.

Enjoy the day, the weather and the time with friends. Chances are, you'll enjoy the wonderful game of golf as well.

Your opportunities will come for a ‘green light,' a realistic one-putt attempt.

Meanwhile, stay calm and patient, be reasonable, steady, conservative, get your solid two putts, and then when the time is right, the distance, the undulation manageable, you feel comfortable and most positive.

Then you strike, like a cat on the prowl, stalking her prey while lurking in the shadows for that opportunity.

For that opportunity that you knew was coming and you begin sinking those one putt shots.