LIVINGSTON MANOR – Love may have been in the air as Sullivan West and Livingston Manor battled on Valentine’s Day in the Championship round of the Wildcat Tournament, but there was no … 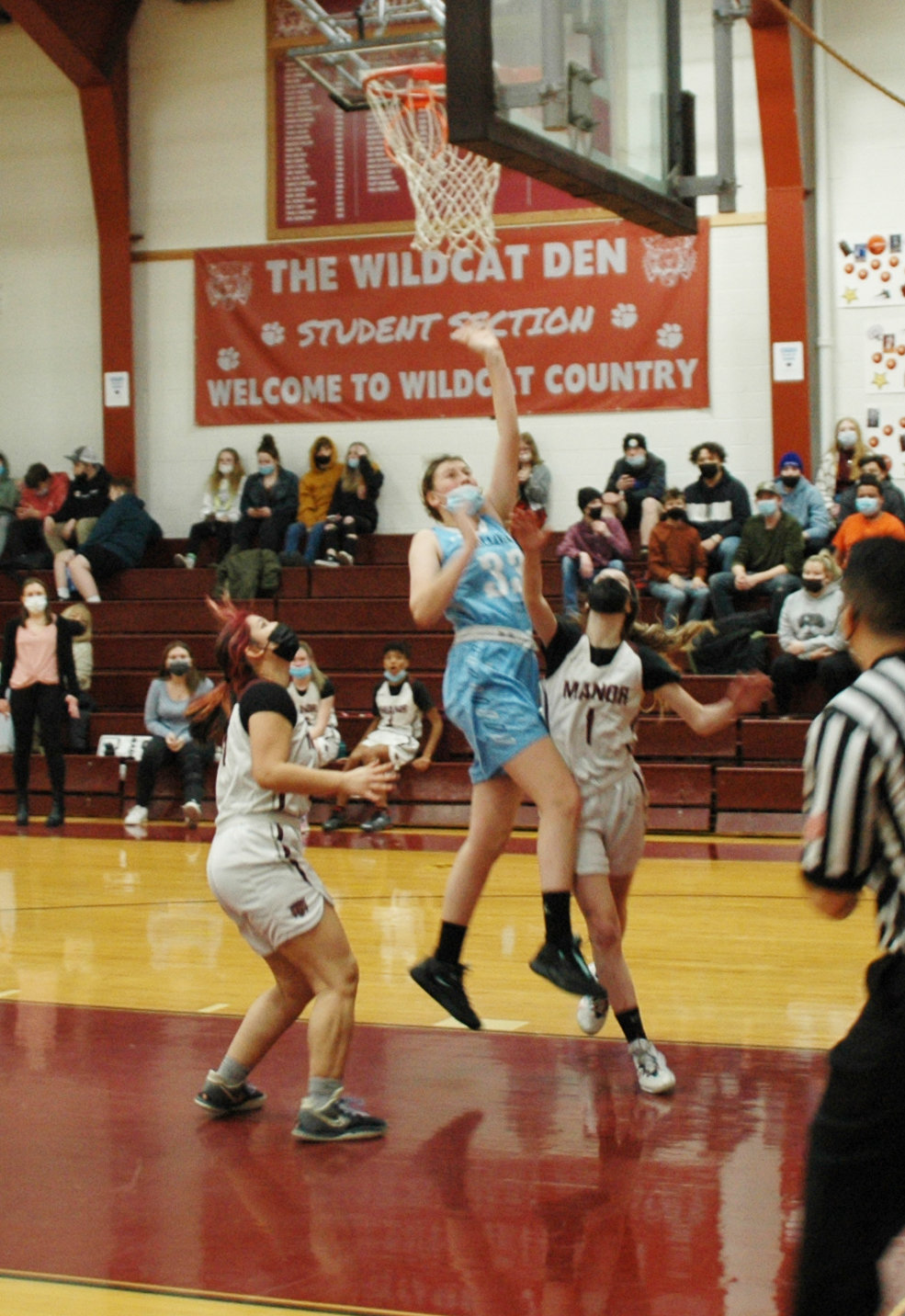 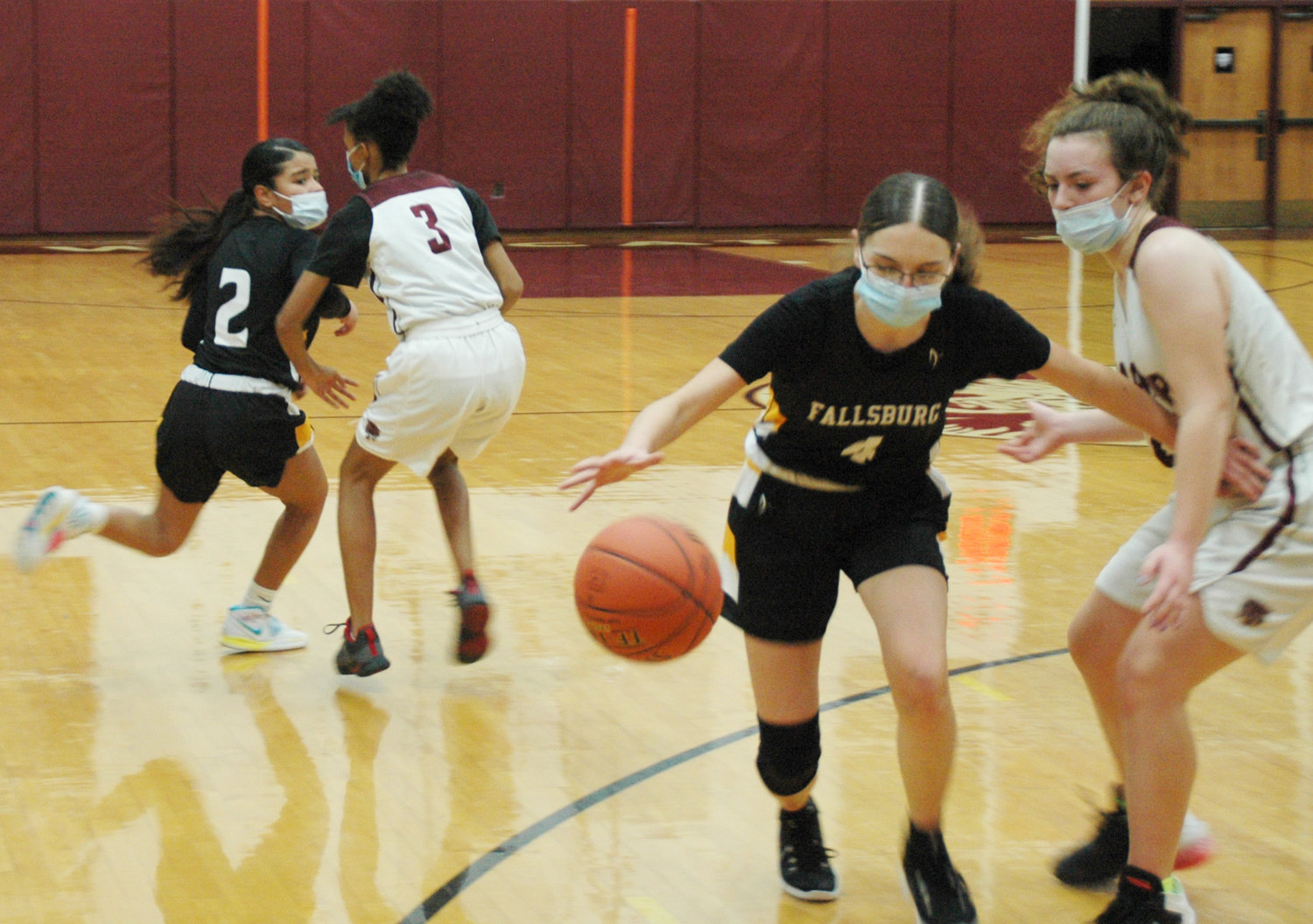 Livingston Manor deployed a new defense to deny Fallsburg’s Ashley Grande (No. 2) the ball in the first round win.
Anthony Morgano | Democrat
Previous Next
Posted Friday, February 18, 2022 6:20 am
Anthony Morgano

LIVINGSTON MANOR – Love may have been in the air as Sullivan West and Livingston Manor battled on Valentine’s Day in the Championship round of the Wildcat Tournament, but there was no love lost between these two teams as a physical matchup set the tone. Sullivan West softened up in the middle two quarters, but a strong start and end for the Lady Bulldogs told the story in a 41-28 win.

The first round of the tournament was Friday, with Sullivan West and Livingston Manor beating Liberty and Fallsburg respectively. The Lady Bulldogs took a 20 point lead into halftime, their defense only allowing six points in the first two quarters. Liberty scored 15 in the second half, but Sullivan West added 21 to win 47-21 and punch their ticket to the championship game.

Livingston Manor and Fallsburg’s game had a back-and-forth first quarter, with the Lady Wildcats taking a 9-6 lead at the end of the first. Strong defense by Livingston Manor kept Fallsburg’s second quarter scoring to two points, and the Wildcats took a 19-8 lead into the break. In the second half, Livingston Manor continued to add to their lead, ultimately winning 36-18 and earn a championship round matchup against Sullivan West.

Fast forward to Monday night. The Lady Bulldogs came out swinging, their defense forcing turnover after turnover and keeping Livingston Manor off balance throughout the first quarter. The Lady Bulldogs had plenty of opportunities, but by the end of the first had only amassed 11 points, while shutting out the Lady Wildcats in the quarter.

Trailing by 11 at the start of the second quarter, Livingston Manor finally settled in and started scoring. And once they started to put it together, they outscored the Lady Bulldogs 14-6 to make it just a 3-point game at halftime.

Sullivan West’s dominant inside game and rebounding ability gave them plenty of second chance points throughout the game, and in the third quarter the offense began running through their interior players. Extending their lead to 29-23 at the end of the third, the Lady Bulldogs were poised to win the tournament. After starting the fourth quarter on an 8-0 run, the Lady Bulldogs extended their lead to 14 and were able to hold on for the 41-28 win.

After winning the Wildcat Tournament on Monday, the Lady Bulldogs defeated the Lady Bears in a division matchup on Wednesday night, 39-28.