Let’s get this party started

SULLIVAN COUNTY—And so it begins at long last…. and lasts we hope it does. The subject at hand is fall sports which a year ago were abruptly put on hold due to the COVID-19 pandemic. The …

Let’s get this party started 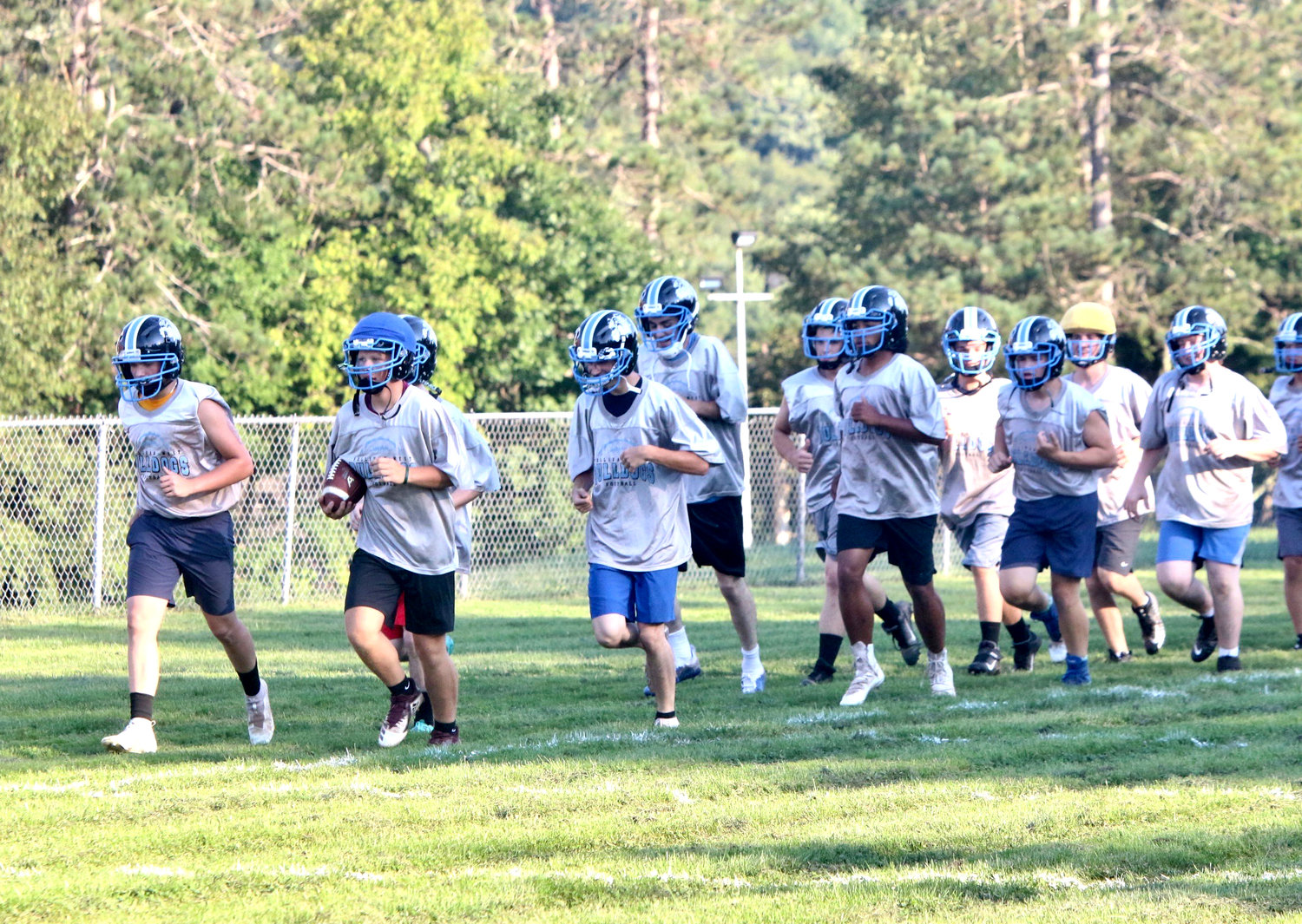 No matter what the sport, conditioning is key so it was a universal sight to witness teams running laps around the field. Here the Sullivan West Bulldogs football team begins their practice with laps around the practice field in Jeffersonville.
Richard A. Ross | Democrat 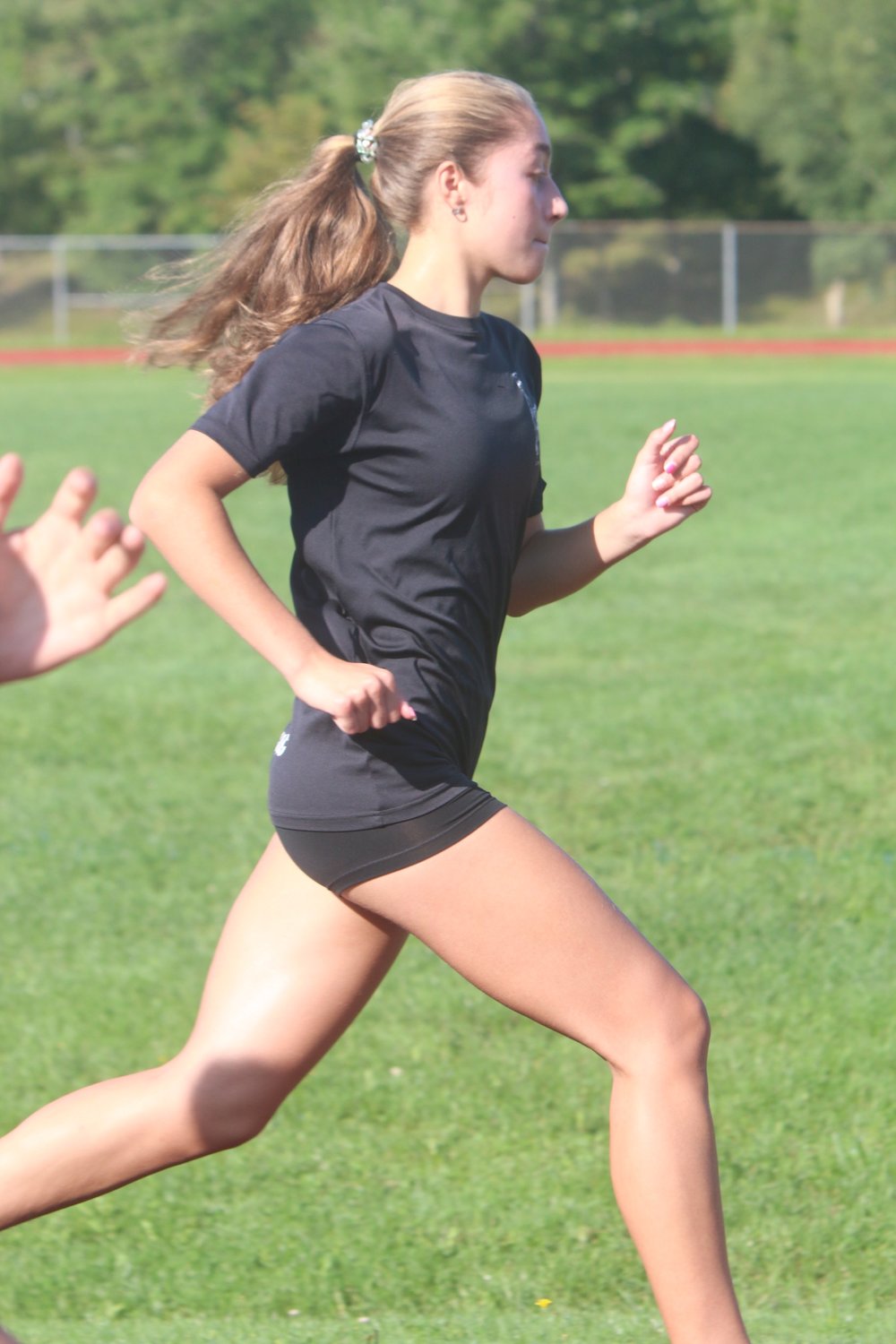 Monticello junior Taina DeJesus sets off at a rapid pace in a 400 drill around the track as Monticello Cross-Country prepares for what may well be an epic season.
Richard A. Ross | Democrat 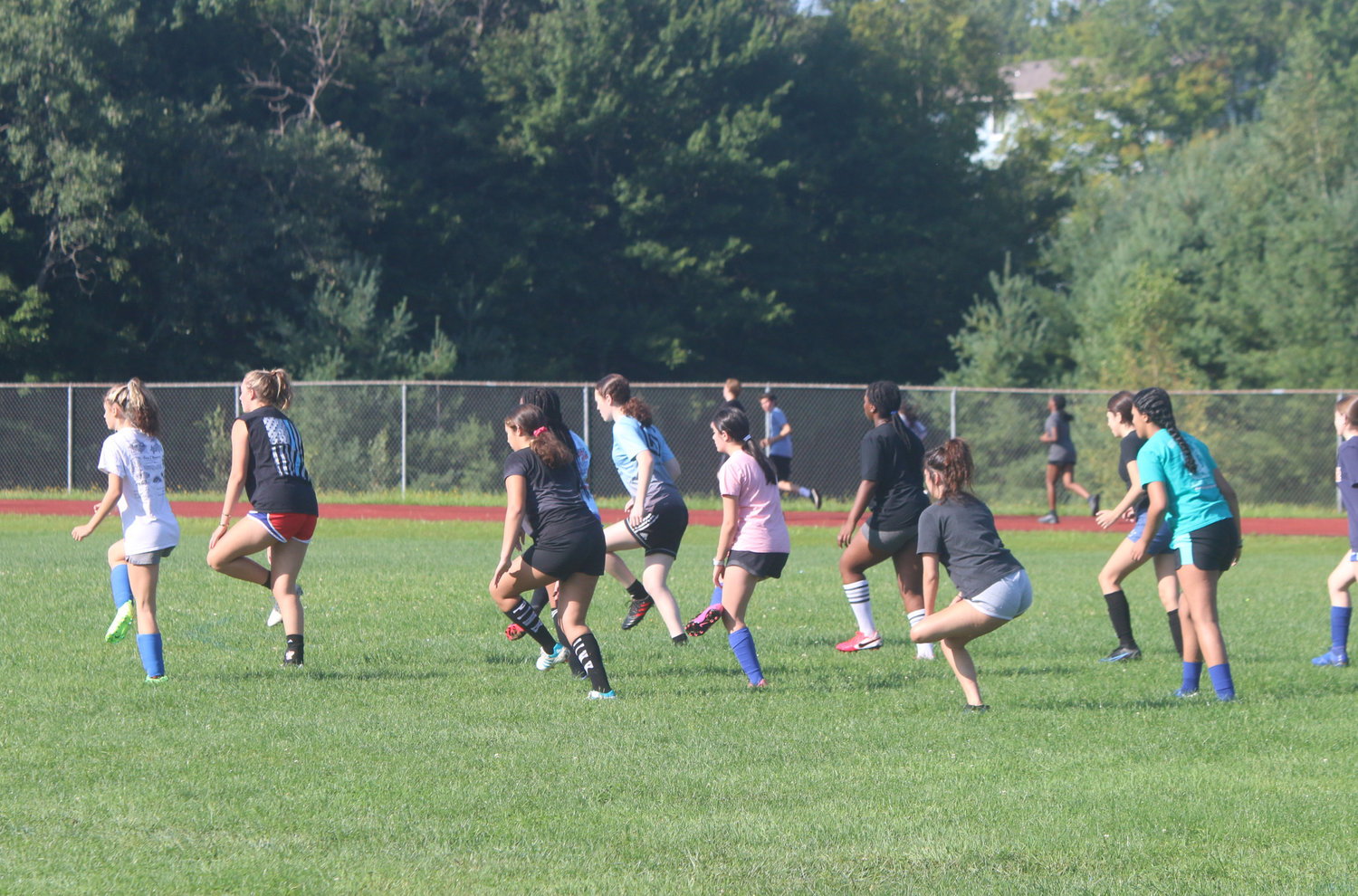 Monticello girls soccer players get underway with step drills on a sultry August morning. Players were reminded to stay hydrated in the late summer heat.
Richard A. Ross | Democrat 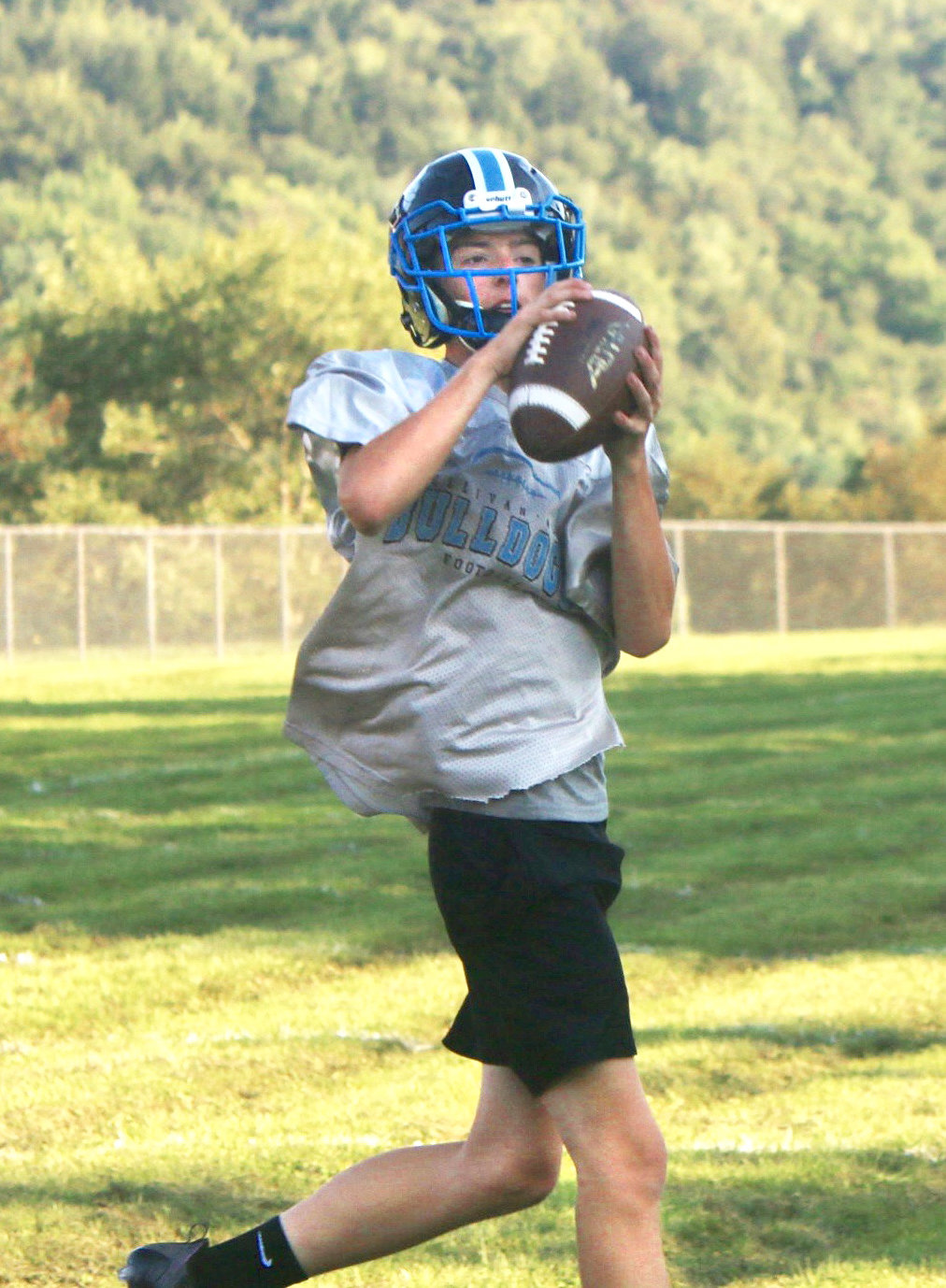 Sullivan West sophomore wide receiver/cornerback Allyn Walter hauls in a pass from quarterback Gavin Hauschild in practice. The Westies look to have depth, experience and size as they enter the fray hungrier than ever.
Richard A. Ross | Democrat 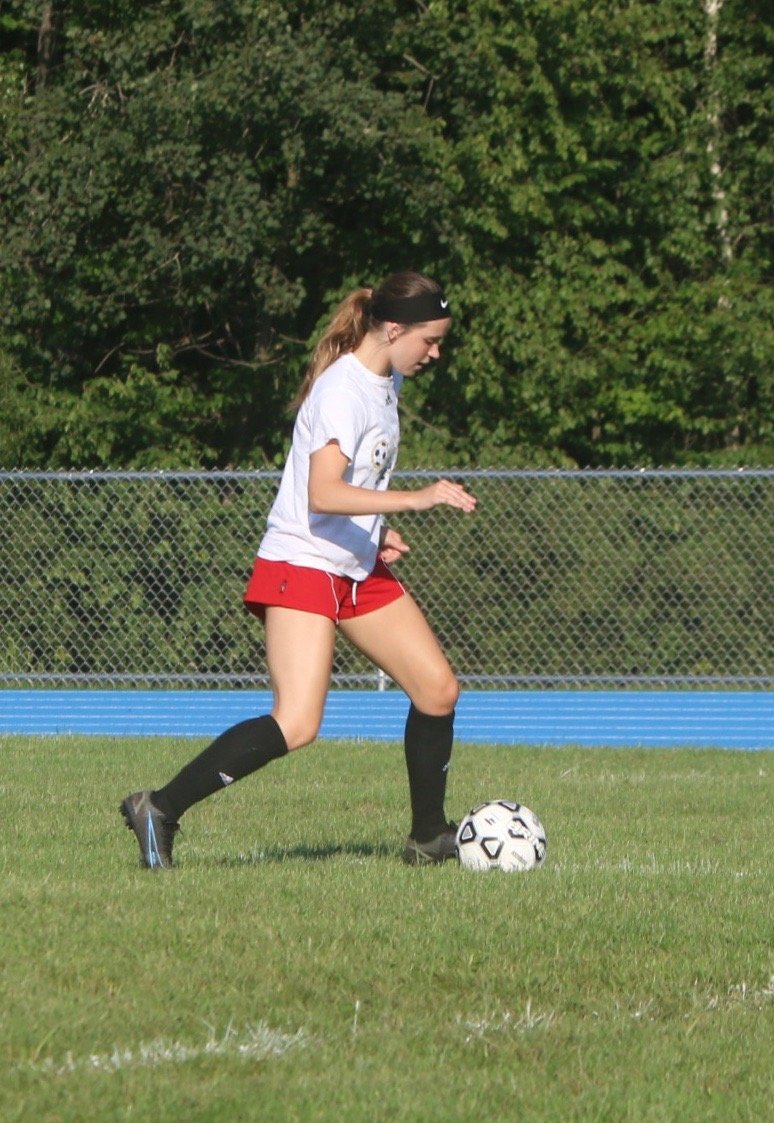 Sullivan West's Grace Boyd passes the ball in a circle drill on the second day of practice.
Richard A. Ross | Democrat
Previous Next
Posted Friday, August 27, 2021 5:22 am
By Richard A. Ross

SULLIVAN COUNTY—And so it begins at long last…. and lasts we hope it does.
The subject at hand is fall sports which a year ago were abruptly put on hold due to the COVID-19 pandemic. The good news about that postponement was that at least fall athletes got to compete somewhat in the early spring.

Consequently, it has only been four months and not a year since the last game, match or meet. This past Monday fall sports practice got underway as football, boys and girls soccer, cross-country, cheerleading and volleyball athletes reported.

At present no masks are required for outdoor participation but once athletes are indoors, masks are a must. With COVID still very much a reality with the Delta Variant still at large, the emphasis is on prevention and caution. That said, the progress of the season in any given school or across the county, section or even the state is still subject to change. Needless to say, all involved are hoping for a full, productive, healthy season.
While some players were still on vacation, the majority of those who signed up came ready to learn, contribute and hopefully win. Varsity rosters appear to be more than adequate though some schools across Section 9 have shelved their junior varsity programs while keeping their modified teams in the fold.
Some ninth graders who would normally be on JV will fill in the modified ranks while those freshmen who are deemed ready will join the varsity squads.

Fanning out across the county early this week, visits were paid to a few cross-country, boys and girls soccer and football practices. One thing these diverse sports shared in common was an emphasis on conditioning and basic skills.

Some teams will be scrimmaging in the coming week including most of the county eight-man football teams who will gather at Sullivan West on September 4.

Monticello’s girls soccer team will head to Seward for a scrimmage. SW girls will make their annual pilgrimage to the Downsville Tournament. Other teams are also lining up pre-season challenges before the actual season gets underway in early September.

Coaches greeted their teams with opening speeches spelling out their expectations and plans for the initial workouts.

For Monticello Cross Country Coach Rick Sternkopf, the first promising sign was a roster that may reach as many as 30, far more than in recent years. Initial training on the track has included progressive 400’s and some hills. This coming Monday coaches will monitor each runner in the Oregon drill, something Sternkopf learned from legendary Washingtonville Coach Mike White.

That will include 1600-, 1200- and 800-time trials that will serve as a baseline for this season’s progress. The Montis host Valley Central on September 2 for their first meet.

Most players are already slotted into positions but coaches maintain a watchful eye to see who might best fit into positions. Sullivan West cross-country runners were already on the road.

Though the team numbers are small, there is nothing limited about the commitment and energy of the Bulldog harriers.

Experienced players such as each team’s seniors and other returning veterans will be a great asset with their leadership and knowledge. Coaches rely on these warriors to guide the younger players on the field, courts and courses. With just three days to get around this week, obviously there is so much more to see and report on.

In upcoming issues of the Sullivan County Democrat, look for stories and pictures that celebrate our athletes across the county, their achievements, milestones and challenges.
Sports is the theater of life and great preparation for many things our young men and women will encounter long after their high school playing days are over. So let’s get this party started.