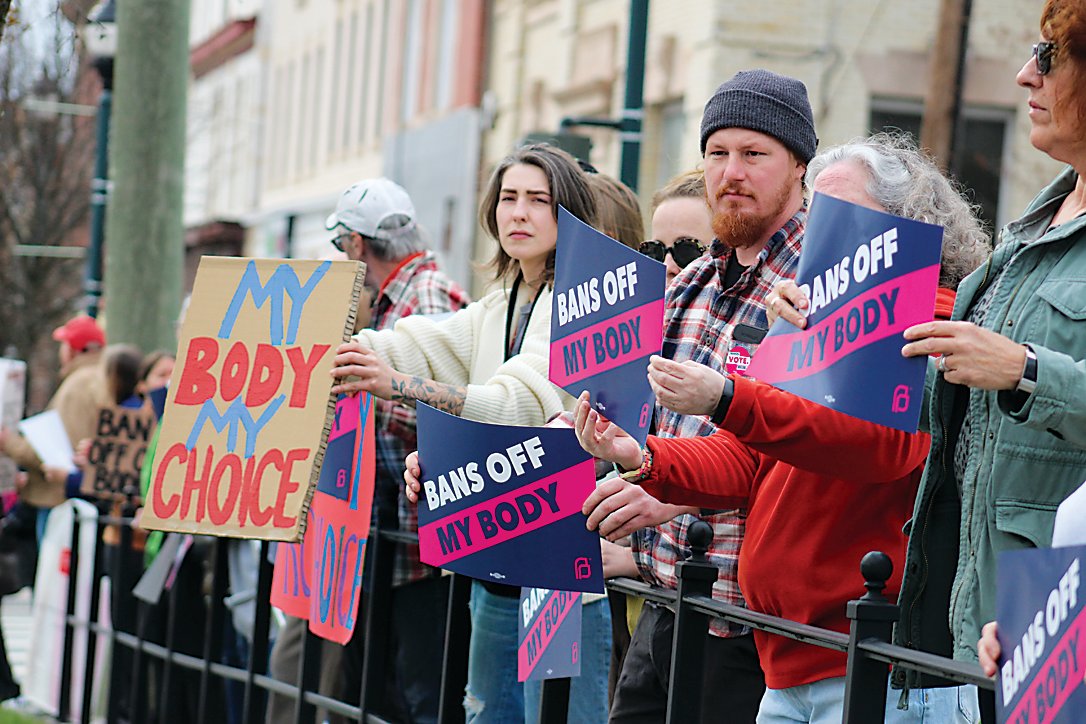 A crowd of people in support of Roe v. Wade gathered on Broadway in Monticello on Tuesday following indications that the Supreme Court may vote to overturn that ruling.
Matt Shortall | Democrat
Posted Friday, May 6, 2022 6:13 am
By Matt Shortall

MONTICELLO — A group of demonstrators gathered on Broadway in Monticello in front of the Lawrence H. Cooke Sullivan County Courthouse on Tuesday to voice support for Roe v. Wade and womens’ rights to abortion access.

The demonstration formed quickly after Politico reported on Monday night about a leaked draft majority opinion from the United States Supreme Court which suggested there were enough votes to overturn the landmark 1973 ruling that guarantees federal protection of abortion rights.

If approved as currently written, the Supreme Court ruling would not ban abortion nationwide but would allow individual states to ban or restrict access.

“We hold that Roe and [Planned Parenthood v. Casey] must be overruled,” Associate Justice Samuel Alito writes in the initial draft majority opinion made available by Politico. “It is time to heed the Constitution and return the issue of abortion to the people’s elected representatives.”

But participants at Tuesday’s demonstration said that such a ruling would only turn the country toward the past.

Demonstrator Barb Schmitt echoed that sentiment, saying, “The big takeaway about banning abortion is that they’re just making it harder for people to get safe, legal abortions. Women of means will always have access to an abortion. It’s the more vulnerable women who are going to have trouble.”

Chief Justice John Roberts verified this week that the draft opinion published by Politico was authentic, but pushed back on the idea that it represented a final decision and condemned the leak itself as a “betrayal” of confidences.

“The New York State Conservative Party has been arguing for nearly 50 years that Roe v. Wade was a bad legal decision,” said Conservative Party Chairman Gerard Kassar “[Monday’s] news leak, which may or may not stand,  hints at a long-awaited victory for those of us who respect the rights of the unborn and who never viewed abortion as Constitutionally protected.”

Yet those in the crowd who have lived long enough to remember a time before Roe v. Wade worried about what such a Supreme Court ruling could mean for the future.

“It’s maddening and infuriating, especially knowing that the majority of people in this country want it to be legal in some form,” said local activist and retired educator Kathie Aberman. “If they can overturn Roe v. Wade then what else can they overturn?”

Sullivan County Democratic Committee ChairpersonAnne Hart said, “The potential attack on people’s right to privacy no matter what that privacy may be is, to my mind, very dangerous.”