SULLIVAN — The Supreme Court of the United States overturned Roe v. Wade in a 6-3 ruling on Friday, June 24, in a case stemming from a Mississippi law banning abortions after 15 weeks of … 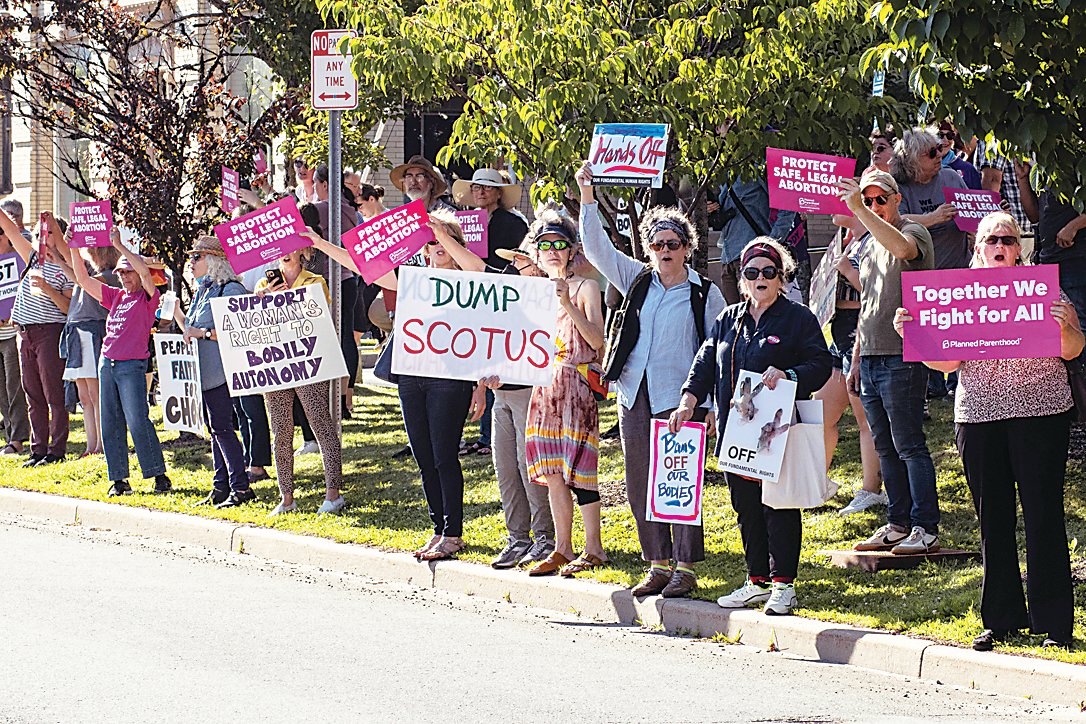 Dozens of protesters gathered along Broadway in Monticello on Friday after the Supreme Court of the United States issued a ruling that overturned Roe V. Wade.
Sean Kuhn | Democrat
Posted Friday, July 1, 2022 6:10 am
By Sean Kuhn

SULLIVAN — The Supreme Court of the United States overturned Roe v. Wade in a 6-3 ruling on Friday, June 24, in a case stemming from a Mississippi law banning abortions after 15 weeks of pregnancy.

This decision also overturns Planned Parenthood v. Casey which made fetal viability the standard for abortion legislation and created the undue burden standard which states that a legislature cannot make a law that is too burdensome or restrictive of one’s fundamental rights.

Ultimately, the Supreme Court decided the Constitution does not confer a right to abortion, and the authority to regulate abortion is returned to elected state representatives.

Dozens of activists gathered outside the Lawrence H. Cook Courthouse on Broadway in Monticello on Friday to protest against the ruling.

Protesters had a number of chants that can be heard in many towns and cities across the country: “When abortion rights are under attack, what do we do? Fight back!” as well as, “Pro-life that’s a lie. You don’t care if people die!”

Many honked their car horns and cheered as they drove past the courthouse, although there were occasional moments of conflict, such as when a passing motorist shouted to the crowd, “Demons! Demons!”

Though Governor Kathy Hochul has made it clear that New York would be a safe haven for abortion access, many states could see severe changes in their abortion laws, and many more already have laws on the books that became activated when the Supreme Court delivered their final decision.

Lieutenant Governor Antonio Delgado, formerly the congressional representative for New York’s 19th district, which includes Sullivan County, said on Spectrum News, “[The overturning of Roe v Wade] is a reassertion of a social order grounded in patriarchy and male domination. It is about control, it is about power, and it is akin to a period of time when women were not their own people but the property of their husbands.”

Those who believe that life begins at conception have argued that the question of abortion should be left to the states to be decided upon by elected officials as opposed to a federal court of appointed judges.

“Over 60 million unborn babies have died since Roe v Wade ... When you think about the enormity of the people that have died already… we don’t want that to continue,” said Annette Rein, Founder of 1st Way Life Center in Monticello which provides services to women in need.

Those gathered to protest Friday’s Supreme Court ruling, however, worried about how it would impact to care for vulnerable women.

Protests and demonstrations have taken place across the country, both to denounce and celebrate the court’s decision. Some protesters have gathered in front of the homes of Supreme Court Justices. According to federal prosecutors, an armed 26-year-old man was arrested near the Maryland home of Associate Justice Brett Kavanaugh in early June and was indicted by a federal grand jury on a charge of attempted murder.