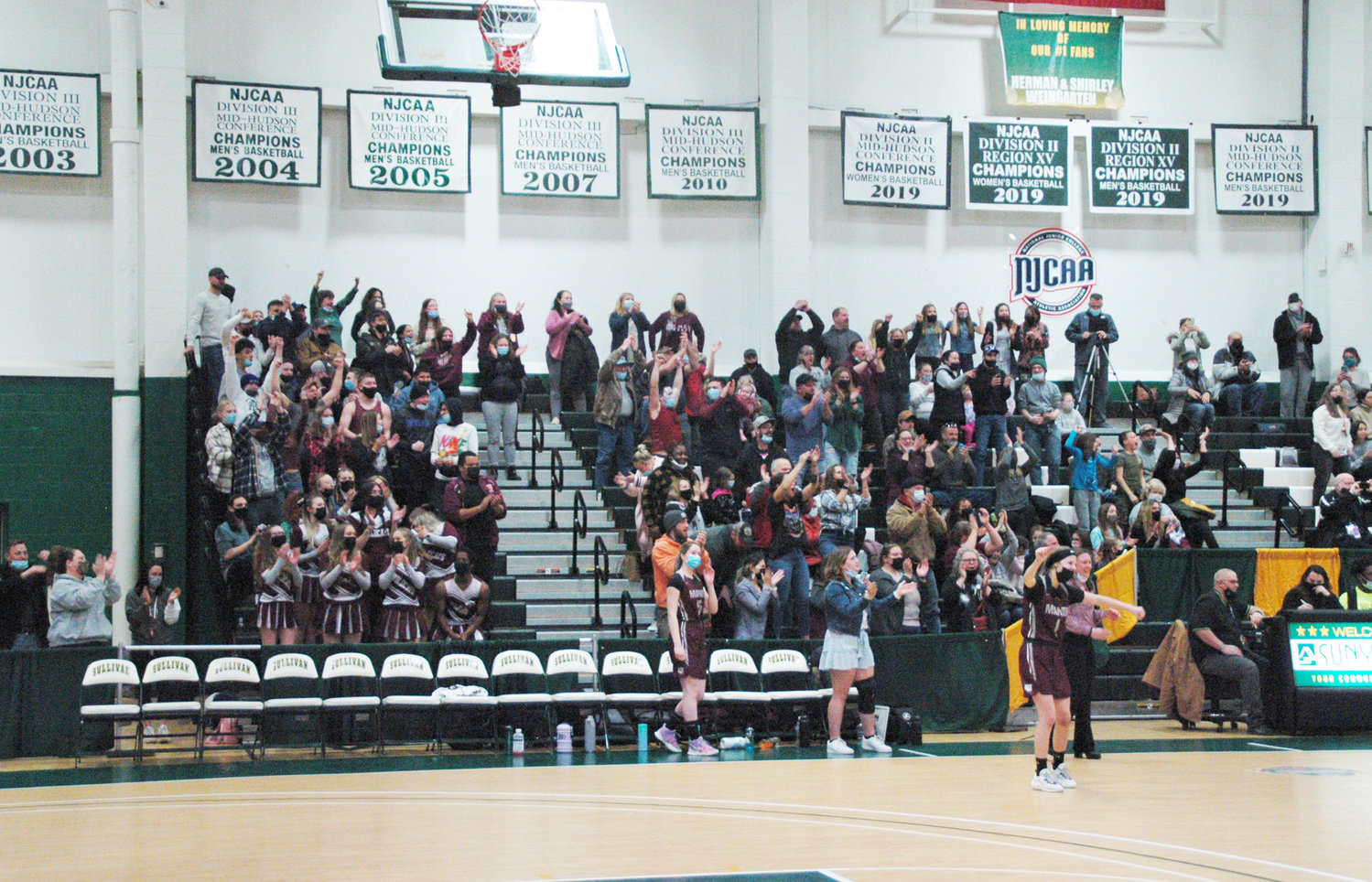 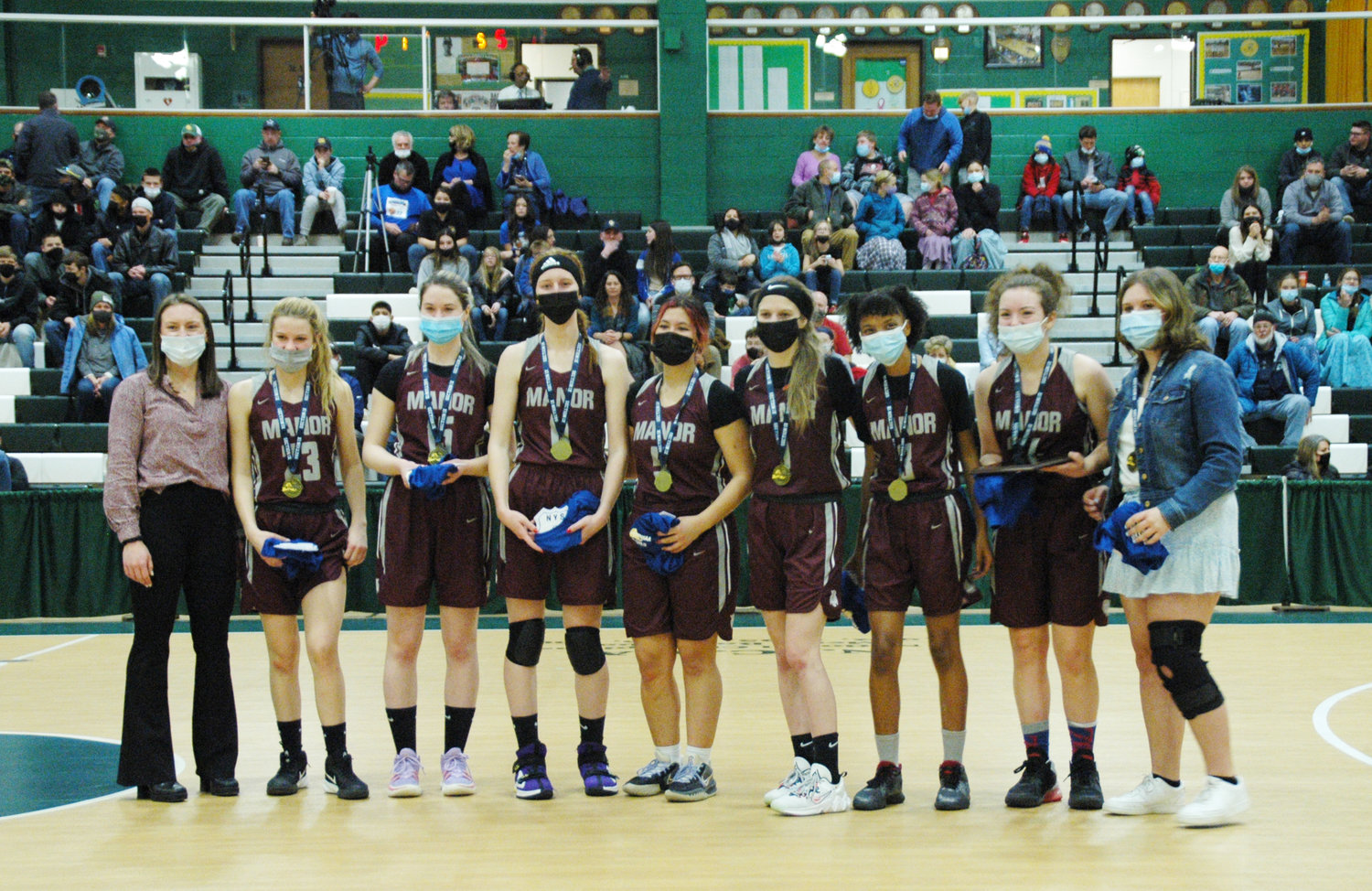 First year coach Maggi Fitzpatrick and her Lady Wildcats pose with their medals after their third straight win, the Section Championship, propelled them into the State Championship tournament.
Anthony Morgano | Democrat
Previous Next
Posted Friday, April 1, 2022 6:20 am
Anthony Morgano

LIVINGSTON MANOR – “Great effort springs naturally from great attitude.” Those words spoken by the legendary Lakers coach Pat Riley sum up the success of the Lady Wildcats. Despite a lack of varsity experience and a new coach, the team’s positive attitude and willingness to buy into the program earned them a Section Championship. At the helm, Livingston Manor graduate, first year coach, and now, 2021-22 Sullivan County Democrat Outstanding Coach of the Winter, Maggi Fitzpatrick.

Maggi has coached the Modified soccer team for the past few seasons, but stepped into the Varsity girls basketball coaching role for the first time this winter, continuing the successful program and taking the young team to the state tournament.

When Maggi started with the Lady Wildcats, she focused on basics and rebuilding the team for the new season. One of her philosophies involved shrugging off the non-league losses and regarding them as more of a practice as a preparation for the division matchups against Eldred and Chapel Field.

The Lady Wildcats emphasized defense throughout the season, which culminated in the Section IX Class D Championship victory over Eldred. They practiced variations of a box and one to deny opponents’ all-stars opportunities to shoot.

“As the season went on, we began implementing more layers to build on the basics. We practiced different end-of-game scenarios, which helped a lot in the win over Eldred.”

The championship game was a testament to the exceptional coaching that Maggi displayed all year. Trailing for three and a half quarters, she kept her team’s spirits up, made some late adjustments, and were able to tie the game in the waning minutes to force overtime. In the extra period, the defense came up big, allowing just three points and securing the win with a steal.

“This is something that I’m meant to do,” Maggi explained. “This is my favorite way to coach humans.”

Coach Fitzpatrick’s philosophies emphasize her focus on being a leader. “I think it’s important to empower athletes to reach their goals, and to extend a hand rather than push them forward. I want to put them in a position to figure things out on their own.”

This became evident near the middle of the season, when Maggi’s presence was less noticeable during the games as the girls began calling their own plays.

“I wanted them to coach themselves and problem solve during the games.”

Maggi gave them the tools for success and they used them.

Another note about Maggi, she never negatively raised her voice during the games. She would yell out plays, but if there were ever adjustments to be made, she would call a timeout and calmly explain to the girls what she saw.

“I don’t motivate through yelling,” she said. “I want to teach and guide, to help them recognize how to get back to a place of high performance.”

The team responded well to this mentality, stringing together back-to-back league wins over Chapel Field to qualify for Sectionals.

Going into the season, Maggi and the girls had a goal-setting meeting to figure out what they were looking to get out of the year.

“One advantage I had this year was that I had no experience and no fear of losing. There was no bar I had previously set. The girls and I wanted to win Sectionals, and we went out and achieved our goal.”

Coach Fitzpatrick explained that she did not shy away from help from former coaches, theory crafting with Kevin Clifford on how to achieve the team’s goals.

“Kevin gave me a run down before the season. He told me that we could win the Section if I played my cards right, and I did my best every day.”

Not only was Maggi a three-sport athlete in high school, but was also around the game throughout her time at Ithaca, assisting with the men’s basketball team.

“I was at every practice, kept stats and watched film and continued to learn the game. Being part of a successful program helped me as a coach.”

Already looking ahead to next season, Maggi is excited to build off of their 2021-22 campaign, ready to hit the ground running.

“There will definitely be some sectional or bust pressure after this season, but we’ll be able to start further along and we’re fully capable of repeating.”

Maggi is hoping to build up the program in the coming years, wanting a JV team to gain experience and cement the basics before the varsity level.

Regardless of the wins and losses, Maggi is focused on developing her players into better people and teaching them skills and life lessons through basketball.

“My main goal is to transform them into better humans,” Maggi explained. “If we don’t win the championship every year it doesn’t mean that I failed.”

Maggi shared two quotes that sum up her coaching mentality.

“If what you have done yesterday still looks big to you, you haven’t done much today,” Mike Krzyewski.

The other, “We cannot become what we want to be by remaining what we are,” Max DePree.

“She’s a hard nosed coach who conveys her information in a way that is conducive to learning and success. She holds the team to an expectation, has high standards, and is professional,” he continued.

He concluded by saying that Maggi is, “Definitely a special addition to our athletics program.”