ROSCOE — The Livingston Manor and Roscoe (LMR) Merger Study Advisory Committee met on Tuesday to discuss the possible consolidation of those two districts.

The meeting was entitled … 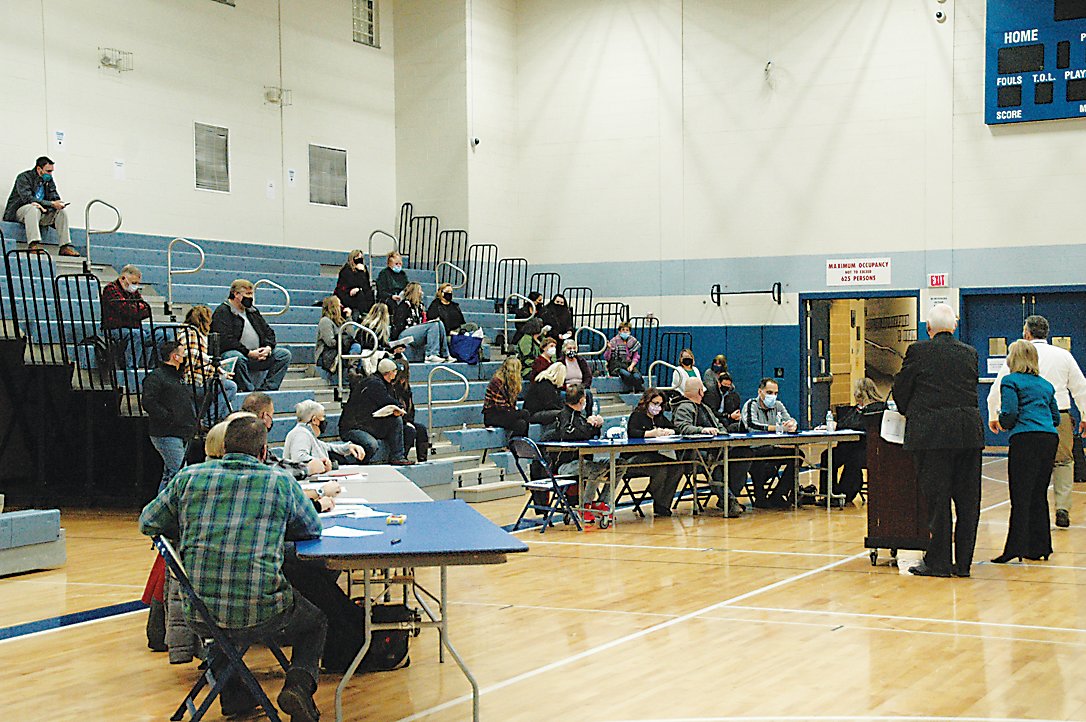 Another Roscoe-Manor merger study meeting was recently held. Pictured are participants at the first meeting back in December.
Anthony Morgano | Democrat
Posted Friday, April 29, 2022 6:10 am
By Anthony Morgano

ROSCOE — The Livingston Manor and Roscoe (LMR) Merger Study Advisory Committee met on Tuesday to discuss the possible consolidation of those two districts.

The purpose of the meeting was to show data collected on the various topics and the trends with population, both local and at the county level, and how enrollment might look in the next few years.

The meeting began with a slide highlighting the takeaways from the March 1 meeting, including the fact that there are positives and negatives for both districts should a merger happen.

The study is for a centralization of the two districts, meaning that, if approved, they would dissolve and become one.

After reviewing the previous month’s meeting, the topic turned to the enrollment projections for both Livingston Manor and Roscoe. By using information regarding live births, current enrollment and census population trends, projections were provided for what the grade sizes may look like until the years 2028-29.

Both schools are projected to decline.

If the two schools voted to merge, their combined numbers for K-12 would hover around 600, meaning that they would remain the smallest school district in the county.

While the study shows that both schools are facing a decline in enrollment, there was a slide showing that most of the state is facing a similar problem.

Home schooled students and resident students attending non-public schools were shown to have no significant effect on Livingston Manor or Roscoe. Conversely, there was a table showing non-resident students that attend each district, which was also not found to have a profound effect on the enrollment projections.

Following the presentation on enrollment projections, the topic shifted to instructional and extracurricular programs. By taking a “snap shot” of current data from both schools, a list of classes offered, state test scores and information about curriculum was compiled.

If a merger should occur, decisions would need to be made on curriculum, the times of the school day and how many sections each grade level would have.

The next few slides showed grade 3-8 state testing results for Math and English, in which Livingston Manor is slightly ahead of Roscoe. Merger Study consultant Alan Pole said, “The numbers aren’t drastically different, so it is not a cause for alarm.”

Once the projections switched to secondary offerings, a handout was distributed that showed the various class/elective offerings for each school, and how many sections could potentially be saved if the two schools merged. For example, the merged English department could net five fewer sections which would potentially mean new electives.

Once the slides were done, the Advisory Committee broke into small groups to discuss some of the takeaways from the meeting to share with the consultants and the crowd.

A few of the conclusions by the committee included:

There would be more opportunities for students, including athletics and clubs.

The maximum classroom size would not change significantly.

There could be an opportunity to consolidate classes and offer new electives.

There could be a potential savings cost if students with disabilities (SWD) stayed in the building instead of being transported to out of district placements.

During the public comment section of the meeting, a concern was brought up regarding the merged athletics with Downsville.

Due to the increased transportation time for Livingston Manor students, their interest in playing some sports has decreased.

Although the transportation meeting is scheduled for May 16, many of the public comments asked about the district lines and longer bus rides for students.

Another public comment was regarding the potential for AP classes if a merger were to occur, since there would be more options for the overlapping sections.

One virtual comment inquired as to why everything being presented was positive, rather than discussing the reservations that many seem to have about the possible merger. There are still meetings involving transportation/facilities, staffing and finances where some of these concerns will likely be addressed.

Another concern brought up was that the population data did not have updated numbers since COVID-19, and Superintendent John Evans explained that most of the new families have not enrolled in local schools, nor have they declared a permanent residence in the Town of Rockland.

John Evans also explained that although smaller classes might seem unnecessary, learning is much different than it was 20 years ago, and COVID-19 had a significant impact on students.

The next meeting will be on Monday, May 16 and it will include a 5:15 p.m. tour of Livingston Manor before the meeting starts at 6.