LIBERTY — On Friday, September 23 the Village of Liberty Police Department arrested Alexander Garcia, 23 of Liberty after an investigation into a disturbance on North Main … 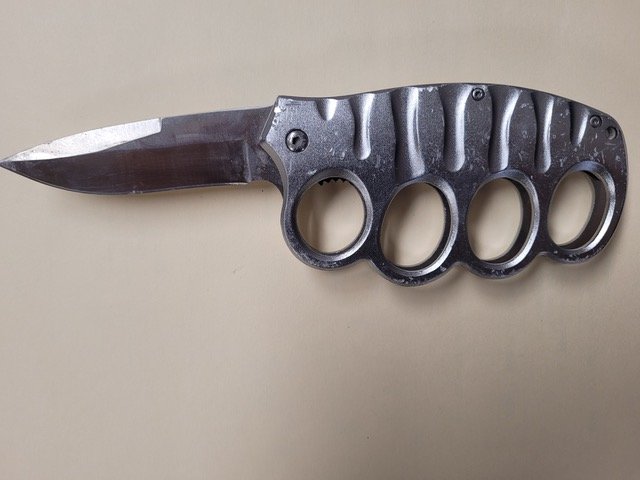 These metal knuckles were used in a fight in Liberty.
Contributed photo
Posted Friday, September 30, 2022 7:00 am

LIBERTY — On Friday, September 23 the Village of Liberty Police Department arrested Alexander Garcia, 23 of Liberty after an investigation into a disturbance on North Main Street.

Officers were initially called to the area of North Main Street and Law Street for a report of two men fighting with one of them brandishing a knife. Upon officers arrival they found Garcia, threatening another male with a knife.

Two responding officers held Garcia at gun and Taser point and ordered Garcia to drop the knife. Initial verbal commands to drop the knife were ignored by Garcia and he continued to verbally threaten to kill the other man. After repeated orders to drop the weapon Garcia eventually complied. Garcia was taken into custody without further incident.

Chief of Police Steven D’Agata stated, “The public is constantly bombarded with news reports of use of force incidents that end tragically with officers using deadly force against suspects. I believe it is also important to highlight the numerous unreported times that officers exercise appropriate restraint in dangerous, tense and rapidly evolving situations.

“I applaud Sergeant Austin Sauer and Police Officer Christopher Orlando for their professional conduct and restraint in this incident to bring it to a safe resolution for all involved.”