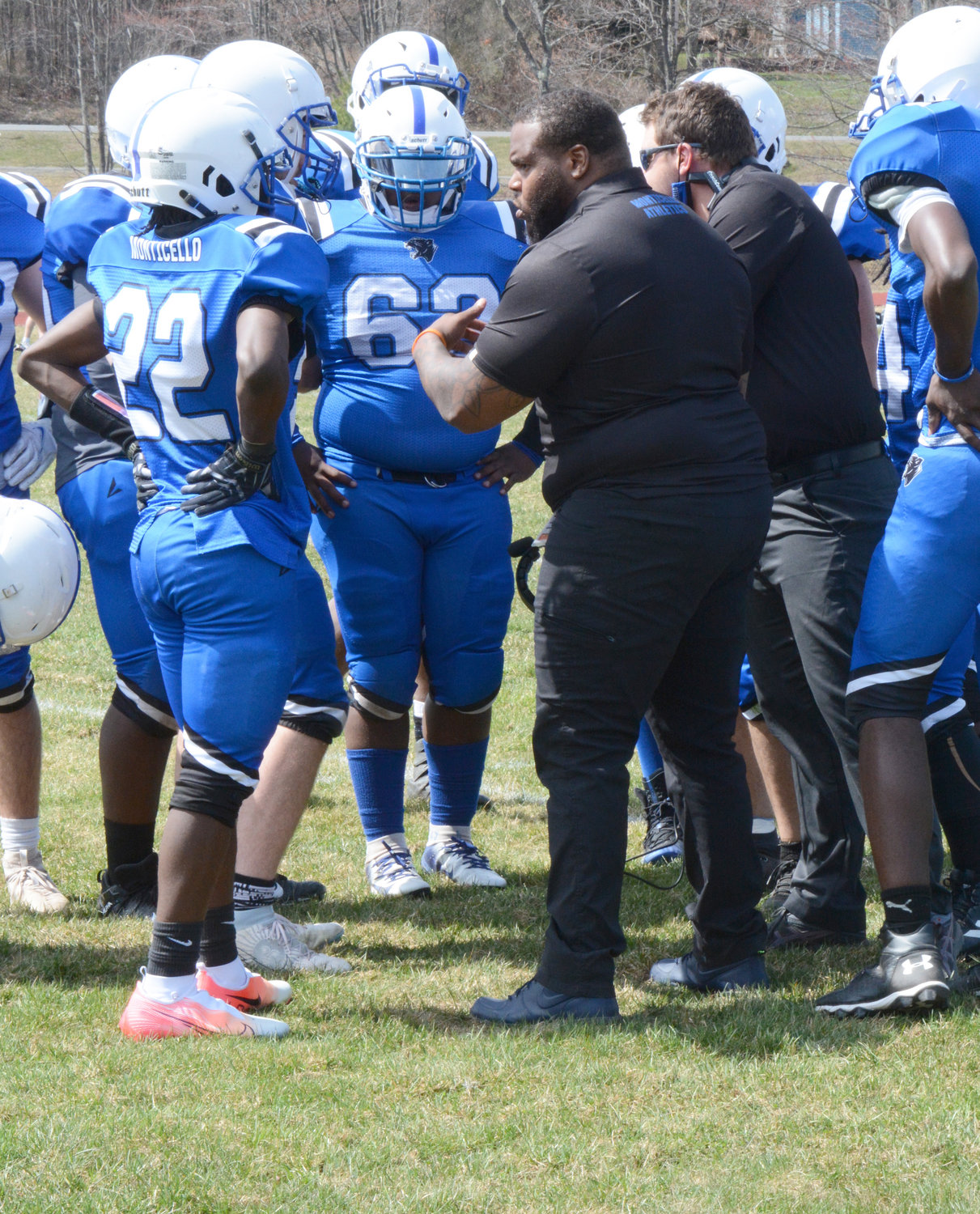 Monticello Coach Arthur Johannes revs up his team during a time out last season.The Panthers won their first game in four years with a victory over Liberty. They hope to build on that this season.
Joseph Abraham | Democrat
Posted Friday, September 3, 2021 7:00 am
Richard Ross

MONTICELLO – When the Monticello Panthers won their first game in four years at Liberty last spring, it was truly something to celebrate. But for second-year head coach Arthur Johannes who has been with the program for half a decade, that was just the opening salvo in what he hopes will be a new era for the county’s flagship school.

The struggles of the past few years are well-known but they are also history. With a cadre of enthusiastic players who are ready to buy in, the Panthers look to build for the future with a powerful upsurge of sophomores and juniors.

There are several returning seniors on the squad including twins Jadon and Jajuan Swasey as well as Jaykim Abraham on the squad and there are first year seniors who will help to provide the kind of leadership Johannes and his fine staff expect both on and off the field. With numbers ranging into the mid thirties, the Panthers look to have depth but Johannes knows from his own football playing days it takes more than quantity to be successful. It takes determination, grit and perseverance.

Naturally, after last year’s Covid-plagued seasons, things are bound to be a bit slow to get moving. Equipment, field preparation, personnel, scheduling and more are all part of that challenge. Johannes is unfazed and communicates that to his players. He is all business but enjoys a great rapport with his team. Early workouts involve a lot of running and separate phases of offensive and defensive work.

This year, as it has in the past two years, Monticello will play an independent schedule. With the addition of Beacon and Washingtonville to an already daunting Class A with the likes of Cornwall and Minisink Valley, the Panthers can avoid such crushing competition while the learning goes on apace with a more manageable schedule.

Playing an independent schedule prevents participation in Sectionals but given the uphill battle the Panthers face in retooling, Sectionals were highly unlikely anyway. Johannes is trying to arrange his team’s entrance in a scrimmage at Marlboro on September 4 but whether the Montis are there or not, the season opener at home vs. Wallkill will be the team’s first test.

“We are about building momentum,” says Johannes who understands that it will take more than a verbal assertion to do so. No matter what the outcome of any particular game though, Johannes believes that kids are winners when they put their best effort out there.

He also emphasizes the importance of community support for the team and the culture of the program. Kids benefit greatly by having family, friends, neighbors and the entire community to cheer them on, win or lose.

Football is a medium for great life lessons which will long endure.

The Sullivan County Democrat looks forward to another year covering varsity high school sports, and extend our hopes for a great year of interscholastic athletics.

In our hearts no matter where we come from, there is a part of us that proclaims, “We Are Panthers, as we are Bulldogs, Bears, Blue Devils, Indians, Comets, Wildcats and Yellowjackets.”

Simply put, we are about our kids.