MONTICELLO -- Nearly a year after losing an overtime heartbreaker to New Paltz in the Section 9 Class A finals, Monticello began its season with an impressive 71-32 … 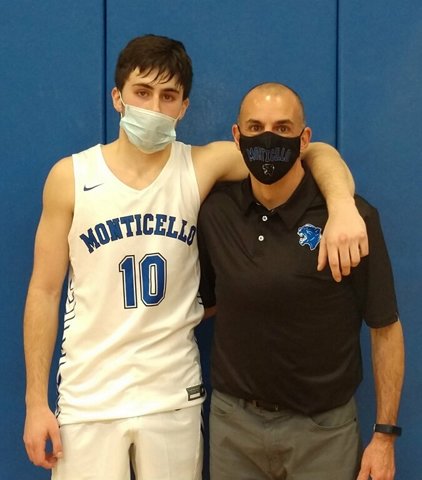 Senior captain Julian Velasco scored a game-high 20 points in his debut as a starter. He was a key reserve a year ago but has stepped right into a leadership role. Coach Christopher Russo puts his arm around his new star after the impressive 71-32 division win over Port Jervis.
CONTRIBUTED PHOTO
Posted Monday, February 15, 2021 12:00 am
Richard Ross - Reporter/Photographer

MONTICELLO -- Nearly a year after losing an overtime heartbreaker to New Paltz in the Section 9 Class A finals, Monticello began its season with an impressive 71-32 Division III win over Port Jervis as the abbreviated and oft-delayed season finally got underway.

As will be explained further, it would appear that the graduation of 11 seniors including two-time Sullivan County Democrat Player of the Year Josh Gattling may not have led to the abeyance of Panther hoops excellence. On the contrary, a nucleus of seniors in Jordan Ruggiero, Julian Velasco and Jalil Jones seem primed to show that in lieu of a predicted precipitous drop off, the Montis under the watchful eye of their savvy coach Chris Russo are back with a vengeance.

More on this shortly.

For many people Winter ranks fourth in their order of their seasonal favorites. In defense of this much-maligned season, one would have to say that while it is cold and barren, it is also quite lovely with its blankets of pristine snow and its intermittent holidays. Also, by its clear comparison, it accentuates the joys of the others three seasons to which it provides a useful foil. All of that said though, winter would be dreary were it not for the unrivaled excitement of high school basketball.

Only this year that strong counterweight to winter doldrums has been seriously downgraded due to the restrictions put upon it due to the Pandemic.

It was bad enough that we resided in limbo for two months while the powers that be wrestled with some pro's and mostly con's as to whether to let the basketball season go forward.

Finally by dint of passing the buck downward first from the Governor and then to the State Department of Health, to the County DOH, to the School Superintendents and School Boards, the long-awaited green light replaced the checkered flag and all was ready to go forward.

And then came the latest blow, a ruling from Section 9 to add the media to the already stated ban on spectators. For this writer/photographer with his 16 straight seasons of Golden Media Awards from the Basketball Coaches Association of New York, that represents a hammer blow to my intention to bring basketball life back into the hearts and minds of the readers of the Sullivan County Democrat and the image-hungry legions waiting with bated breath for my stop-action photos.

Instead, we are now in absentia and reliant of coaches to give us some details about games. Action pictures will be rare if any since no one is present to shoot them let alone have the equipment, expertise and access.

While it is a matter of opinion as to whether this latest restriction was deemed propitious, it is the view of nearly everyone that has weighed in locally that it amounts to a travesty. Such is life and yet another aspect of changing life in the age of Covid-19.

Julian Velasco who came off the bench last year, made his first-ever varsity start and what a start it was. He was the game's high scorer with 20 points.

“I'm so happy for Julian,” averred Russo, “He was a key reserve player for us and now a starter and a captain. He gets 20 points in his first varsity start. It was a great day for him.”

Russo went on to say, “We made some match-up adjustments to fix our defense and made some better rotations in our help defense. Junior guard Pedro Rodriguez did a great job defending Nico Rodriguez. We wanted to neutralize his shot-making ability and Pedro was up to the task.”

Jalil Jones finished with a double-double 12 points and 11 rebounds including a thundering dunk late in the game.

“We were able to control the boards and get out in transition, which is really a strength of our game,” Russo added. “It was great to be back in the gym with the guys, and we played better than I expected with only six practices and many new parts. I was really impressed with our play. Jordan had 15 points and six assists. We got great energy from the bench as well as strong leadership from our captains.”

Monticello 1-0 (1-0) will travel to clash with division rival Minisink Valley on February 17 at 7 p.m.