Those adjectives imply high intensity, but they don’t even come close to describing the basketball version of “The Gladiators,” … 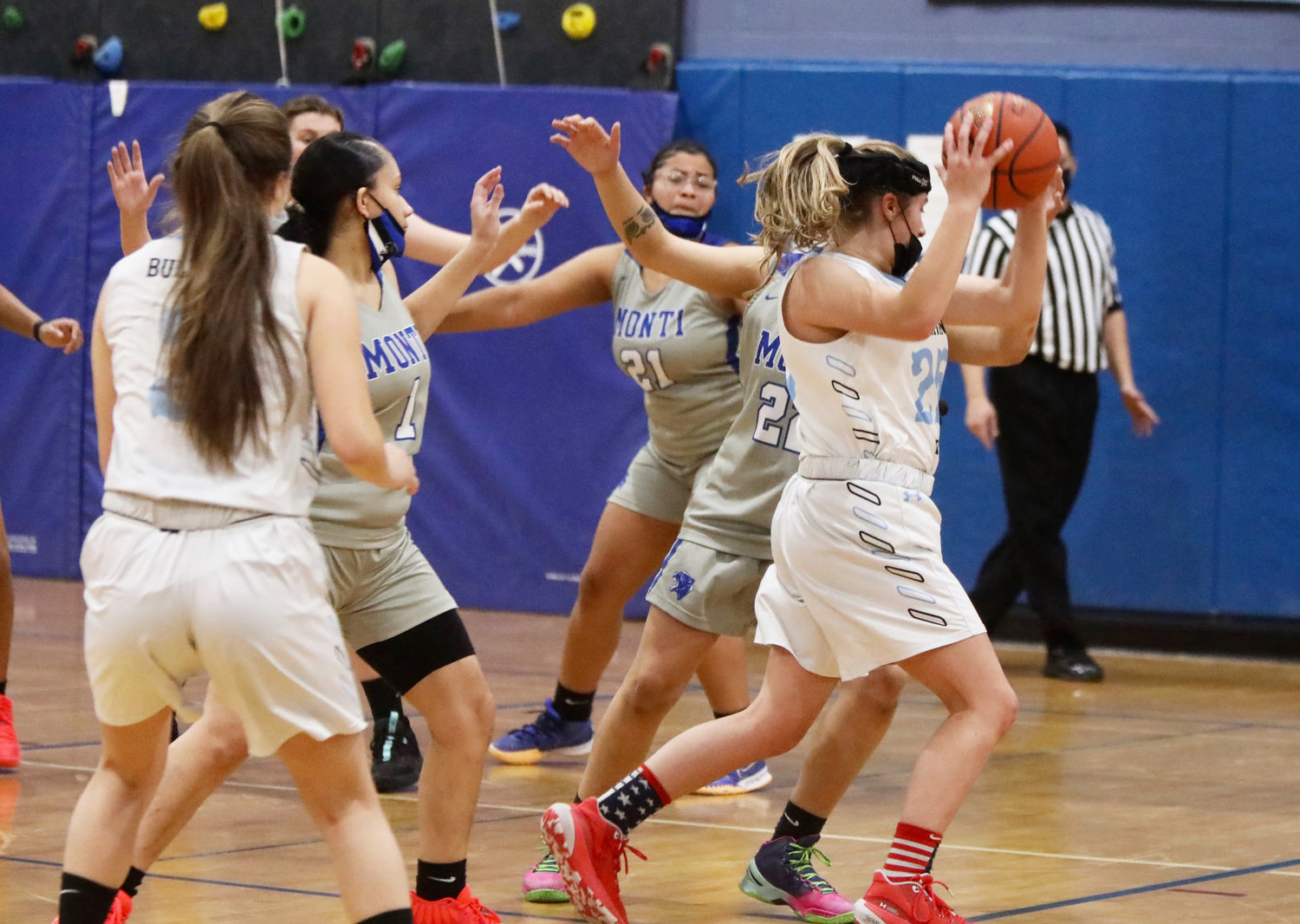 Sullivan West senior Riley Ernst looks to navigate the ball against Monticello’s interior defense. She scored 18 points in the game including the game-winning six in the second overtime.
Richard A. Ross | Democrat 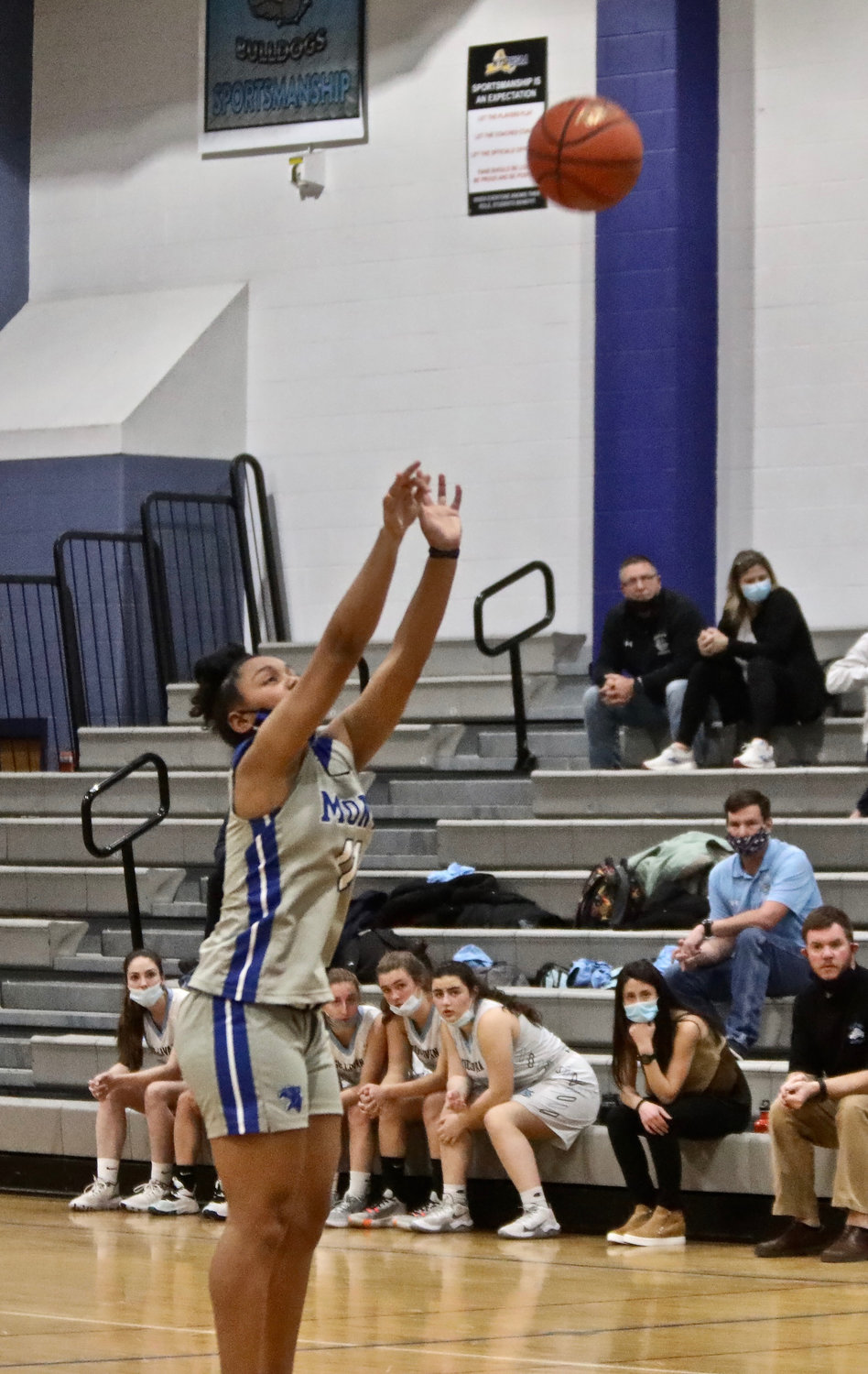 Monticello junior Aaliyah Mota fires up a three in the early going. She scored a game-high 20 points in the epic clash with Sullivan West.
Richard A. Ross | Democrat 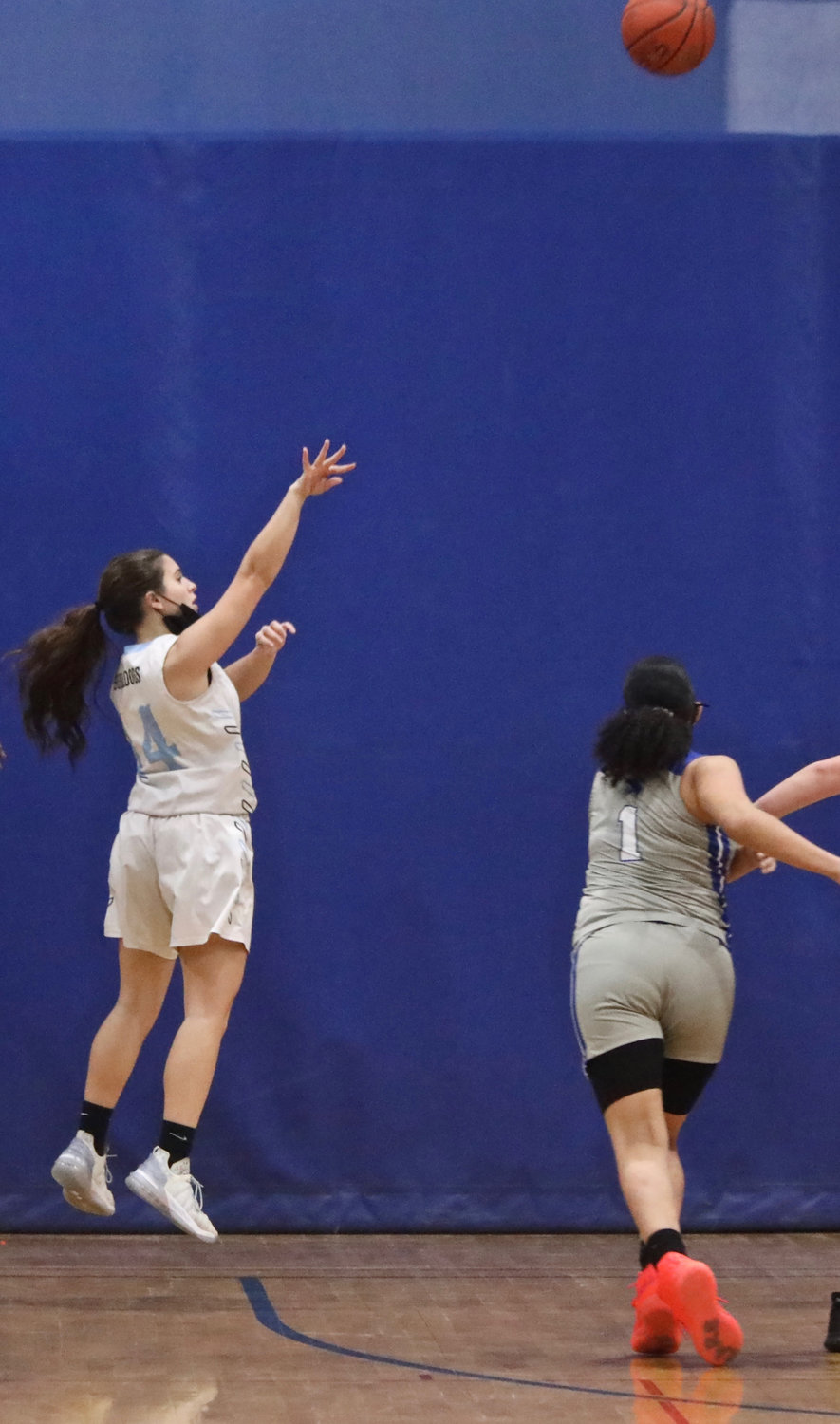 Sullivan West senior Brielle Arnott cans one of her trio of treys as Monticello’s Janee Vias closes too late to alter her shot. Arnott had 12 points in the game.
Richard A. Ross | Democrat
Previous Next
Posted Tuesday, February 1, 2022 6:20 am
Richard A. Ross

Those adjectives imply high intensity, but they don’t even come close to describing the basketball version of “The Gladiators,” staged by host Sullivan West and visiting Monticello. It took six quarters to finally decide the outcome as the Lady Westies’ Riley Ernst scored six unanswered points in the second OT to marshal the 44-38 win. She tallied 18 points all told.

By the time that second overtime quarter began, the Montis had two of their top starters fouled out. This game was a total anomaly. It was bizarre in the number of turnovers each team committed via traveling calls and hapless passing. Both failed to capitalize on those to gain a lead that would stand up. Monticello had a nine-point lead at one point but Sullivan West whittled that away via great defense and timely shots. Brielle Arnott was a difference-maker on the night with a trio of treys. Riley Ernst was clutch but, it was a total team effort.

Trying to stave off Monti junior standout Aaliyah Mota was a tall order, but her drives to the basket were often hampered by hands-up defense and a bevy of bodies in her way. She did score a game-high 20 points, but the Bulldogs’ defense frustrated her intention to do much more.

Call this one “Wheel of Misfortune,” with both teams finding novel ways to sully their chances to win. The Montis led 12-9 by the end of the first quarter and 19-12 at the half. Mota had piled up 11 points. She’d score five more in the third but Monticello’s lead was cut to two at 26-24, thanks in great part to a pair of threes from Arnott and one from Grace Boyd. In the fourth quarter, neither team scored for over two minutes. Sullivan West missed seven free throw attempts that would have spelled a Westies’ victory by the end of regulation as Monticello only posted five points in the fourth quarter while missing four free throws.

With a 29-27 lead, Sullivan West’s Taylor Wall missed a pair of free throws with 49 seconds remaining in the game. The Montis scored the next four points to take a 31-29 lead. But another Monticello turnover, this one at the worst time led to a Riley Ernst bucket as time expired with a 31-31 tie.

In that first OT, after Wall missed free throws, Ernst got a put back to give SW a 33-31 lead. Mota was fouled at the other end of the floor. She missed the first but got the second free throw to tie the game. Monti Gianna DeMaio had a chance to win the game with a pair of free throws. She blanked on both.

The Lady Westies had a three-point lead as the first overtime was about to expire, but a timely three by Janee Vias tied the game at 38 and a second OT ensued.

In that final segment, Riley Ernst scored six points and Monticello scored none to cement the Lady Bulldogs’ win which advanced them to 8-2 on the season, the best start in the era of Coach Pat Donovan’s tenure. Monticello fell to 7-4. All told, Monticello was 11-for-18 from the stripe (61%).

Sullivan West was a dreadful five-for-18 (28%). Combined the teams missed 20 free throws. Between that issue and the turnovers, both coaches expressed the need to go practice to iron out those fallibilities that could cost them in the big games to come. Sullivan West qualified for sectionals with this win. The two coaches, longtime good friends met after the game and were all smiles and brimming with mutual respect for one another. Pat Donovan quipped with his friend, “It feels good,” but he quickly added, “It was a great game. His kids played tough, our kids played tough. It was like nobody wanted it. It was scrappy and physical.”

Monti Coach Ryan Jasper said, “I can’t say enough about our team. They weathered the storm as long as they could with two of our top players on the bench. Both teams played their rear ends off.” Both coaches agreed that this was a great learning experience. As Donovan noted, “You can’t simulate this stuff in practice.” He added, “We played good defense and took a couple of charges. That was big. We got great play in the second quarter from Mia Nunnari, Felicity Bauernfeind, Grace Boyd, Kaylee Dibiase and Georgeanne Cardona to hold their lead down to seven. It’s too bad someone had to lose. Ryan has done a tremendous job with his girls. It's great to see that Monticello getting back. He's a great coach and an even better person.”