Catherine Staigele was born in Brooklyn in 1870, but spent nearly all of her professional life in Sullivan County. She was as accomplished during her lifetime as perhaps any woman in the area, and … 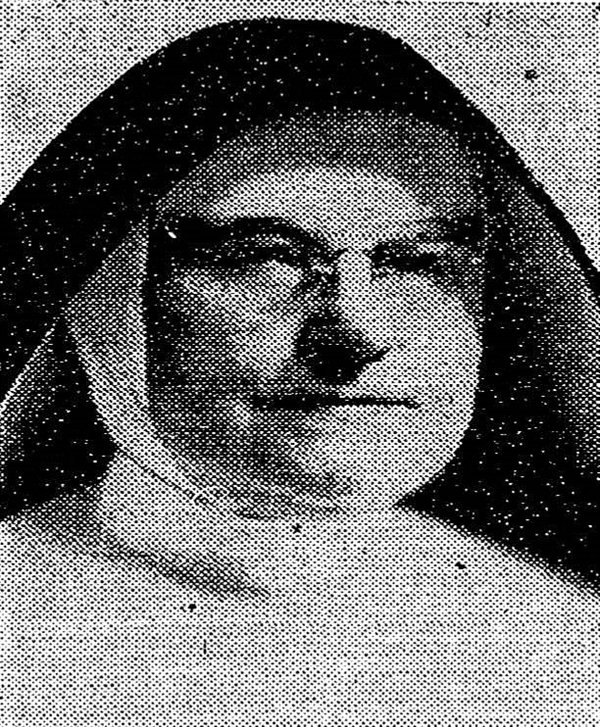 Catherine Staigele was born in Brooklyn in 1870, but spent nearly all of her professional life in Sullivan County. She was as accomplished during her lifetime as perhaps any woman in the area, and yet most people did not know her name.

She was better known as Mother Polycarpa, and she helped build and manage the expansive St. Joseph's Sanatorium and its ancillary operations in Forestburgh, and served as postmaster there for more than 40 years.

Growing up in Brooklyn, she attended the Holy Trinity Parochial School, and entered the Holy Rosary Convent in Amityville, Long Island at the age of 16, eventually taking the name Sister Polycarpa. She served as a missionary for eight years before coming to Sullivan County as part of the contingent of Dominican nuns at St. Joseph's, where the land for a sanitarium was purchased in 1896.

The St. Joseph Sanitarium was eventually augmented by a boarding school for children of from six to 14 years of age whose health issues prevented them from attending public schools, and separate summer camps for boys and girls. It was awarded its own post office by the federal government in 1898, and for part of its existence generated its own electricity.

It all began when a small contingent of Dominican Sisters visiting from Brooklyn were out for a country drive in a horse and carriage one afternoon and came upon the just completed summer residence of grocery magnate Thomas Hunt Talmadge. Talmadge had died before the expansive home was finished and had never lived in it. In fact, his family had put the elaborate shingle-style Victorian structure up for sale.

Before long, the Sisters had purchased the house and nearly 1200 acres of land, including a nearby lake. Despite their lack of funds, they began to build on May 19, 1897, breaking ground for five buildings, dedicated to Our Lady of Lourdes, St. Dominic, St. Vincent Ferrer, St. Antonina, and St. Rose of Lima. The corner stone of a new convent, accommodating 40 nuns, was laid September 12, 1897.

The sisters employed architect F. J. Berlenbach to design the many buildings, with special attention to providing rooms with an abundance of light and ventilation. The lake, christened the Lake of St. Dominic, was utilized to furnish electrical power for the entire complex.

Sister Polycarpa arrived in 1896 and was appointed postmaster of the St. Joseph's post office by President McKinley in 1898. She was the first nun to serve as a postmaster in the United States, and held that position until reaching the mandatory retirement age of 70 in 1940. She was succeeded by her longtime assistant, Sister Michelena Ostermayr, who then became the second nun ever so designated.

In August of 1938, a number of dignitaries from both the Catholic Church and the secular world gathered at St. Joseph's to honor Sister Polycarpa, who had by that time been serving as Mother Superior for many years, on the Golden Jubilee of her entrance into the convent.

During the festivities, Mother Polycarpa was lauded not just for her work in the religious realm, but for her more worldly accomplishments, as well.

“Under her management, 2,000 acres of practical wilderness has been developed into one of the largest institutions for education and health in the country, with many large buildings, including a sanatorium, a convent, and a boys' and girls' camp where more than 1200 of the New York archdiocese are cared for every summer,” the New York Times reported in its August 16, 1938 edition.

By 1946, 600 acres were being farmed, and it was reported that "5,500 bushels of potatoes, carrots, beets, cabbage, and corn were yielded annually. Apples, pears, plums, and grapes were grown and preserved. Much work was required by the good nuns in canning approximately 8,000 quarts of both fruits and vegetables each year."

Jacobowitz and Gubits recognized by Sullivan County Chamber of Commerce as 2021 Business of the Year
WALDEN, N.Y. - The law firm of Jacobowitz and Gubits, LLP (J&G) was named 2021 Business of the Year by the Sullivan County Chamber of Commerce. The firm received this award on November 10, 2021 …
If you’re struggling with paying bills on your home, there is help coming
MONTICELLO – Sullivan County Treasurer Nancy Buck wants local homeowners to know they may qualify for State assistance in paying delinquent taxes and other charges.“My office has recently …