MAMAKATING —  Some road work might not be done this year due to rising oil and fuel costs.  That’s according to Highway Superintendent Robert Hufcut during his regular report … 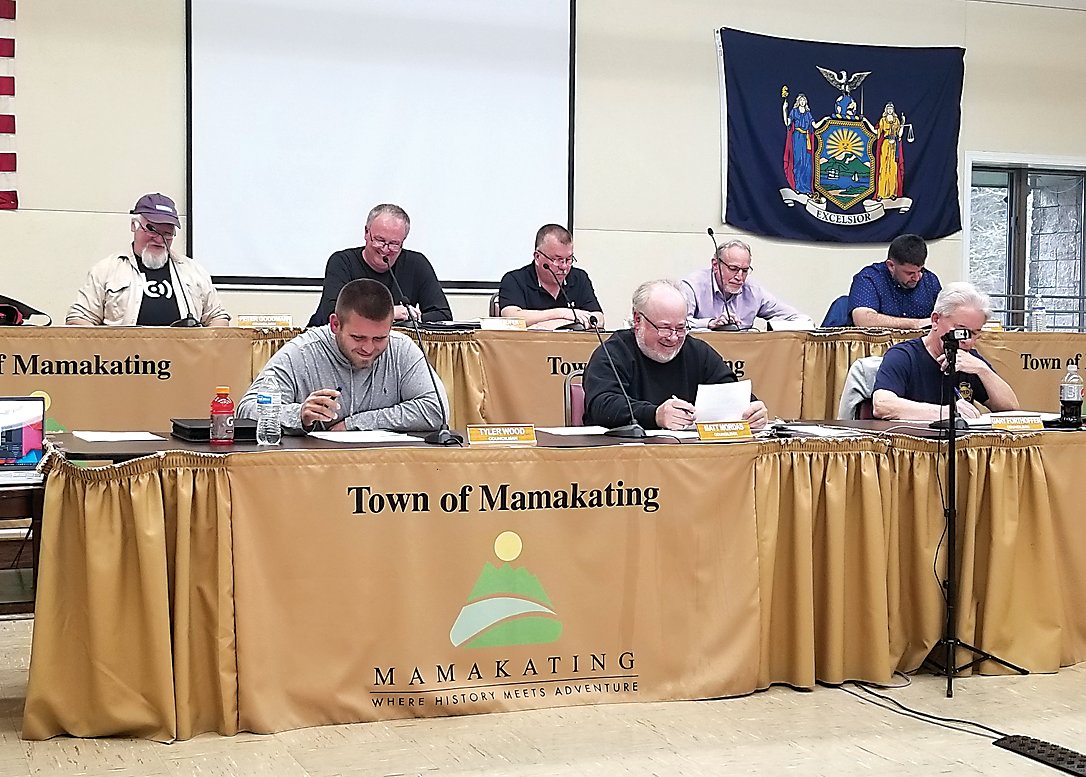 Board members in the Town of Mamakating discussed rising fuel costs and plans to address budget issues at their most recent meeting.
Samantha Montagna | Democrat
Posted Friday, May 13, 2022 6:10 am
By Samantha Montagna

MAMAKATING —  Some road work might not be done this year due to rising oil and fuel costs.  That’s according to Highway Superintendent Robert Hufcut during his regular report during Mamakating Town Board meeting on May 3.

“You might not think that it’s going to affect our paving this year. It is tremendously,” Hufcut said.

Hufcut said he received an updated estimate for cold paving, and it is $55,000 more than six weeks ago, and Hufcut estimated costs will rise another $10,000 each week.

Hufcut noted that although cold paving will occur, some blacktopping will likely not be done.

Hufcut said he wanted to make everyone aware of the situation and he is looking to conserve money for the roads for the winter.

He also noted that he was not sure the salt budget or the fuel budget will be enough due to rising costs. He asked everyone to bear with him as they navigate rising costs.

Chris Leser came to the podium to inquire about rising costs. Leser noted that his price for fuel oil at the start of the winter was $2.99 a gallon, and now the price is $6.24 a gallon.

He asked if the board could store or order oil in bulk because prices are rising every day. Hufcut responded that their tank capacity is 8,100 gallons, and since the delivery truck can carry 2,500 gallons, he orders 2,500 gallons as soon as the tank is emptied that much. Hufcut stated that he will not let the town go short.

Leser also asked if the board was planning to address this rising cost in the budget. Supervisor Robbins said that the board has been discussing the issue.

Deputy Supervisor John Rufer added that the board has been meeting since February to discuss this issue to determine usage and what can be done.

Rufer said that the town can get fuel for much cheaper than the public, but it is still much more than the board anticipated to spend. Leser said he feared that trucks will be parked, or the town will go over budget. Supervisor Robbins stated that the board is working on the issue.

Before the discussion of fuel costs, Town Supervisor Mike Robbins started the meeting with a moment of silence for former Summitville Firehouse Chief Frank Doolittle.

He said that Doolittle “gave a lot to the community. The firehouse was his life. It was his family’s life.”

A Celebration of Life service for Doolittle took place on May 7th at the Summitville Firehouse with hundreds of people in attendance.

Hufcut encouraged residents to continue to pay their respects to Doolittle’s family and “show them how much Frank meant to the community.”

In other news, the board voted to implement Audio Eye into the Mamakating town website since it is being redone.

Robbins explained that Audio Eye costs $3,500, is ADA compliant, and will be an add on to the website.

Robbins explained that Audio Eye will help those with visual impairments see fonts and colors and will help with other accessibility issues as well.

“It will be a good thing for all disabled people who have a hard time navigating through our website,” Robbins said.

Lastly, the board voted to hold their short-term rental workshop on May 19th at 6 p.m. in person or via Zoom. The meeting will be public, and the public is welcome to watch, but Robbins said there will be no public comment at the meeting.

The board also voted to cancel the July 5th and September 6th town board meetings.

Since they occur after major holidays, Robbins said many people might be on vacation, and they could only hold one town board meeting that month to accommodate the holidays.