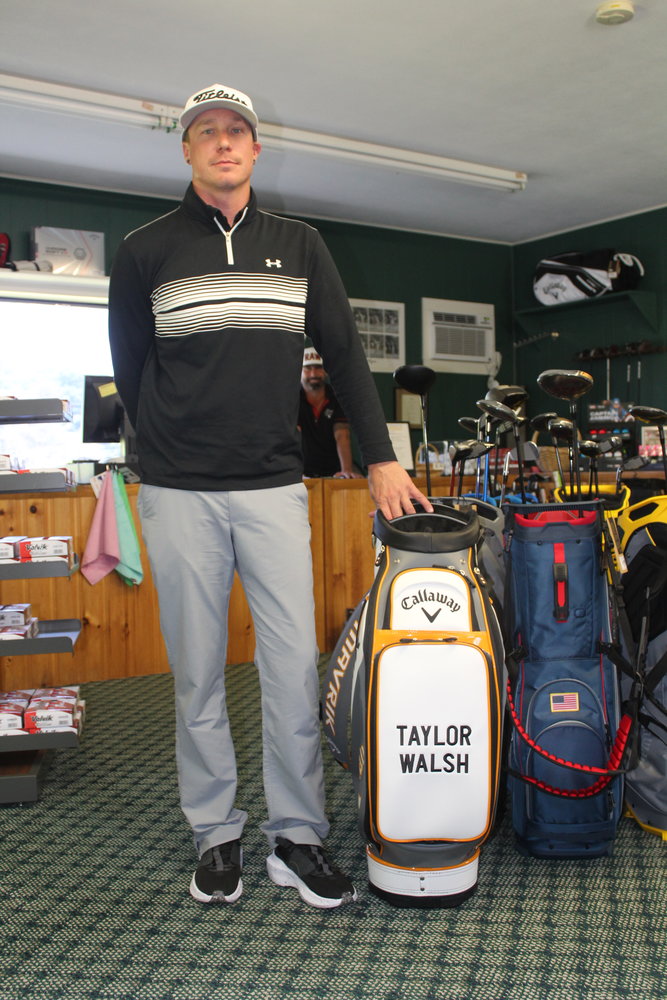 Taylor Walsh is the new head Golf Professional at the Lochmor Golf Course near Loch Sheldrake. Taylor has played golf professionally on the Mini Tour and is available for golf lessons both at the golf range and out on the golf course.
Ed Townsend | Democrat

The 15th hole on the back nine of the Lochmor golf course near Loch Sheldrake gives a good challenge to golfers who want to avoid Morningside Lake on the left and the small stream of water running in front of this green. An accurate chip shot will place your putt where a birdie can be scored on this par 5 hole.
Ed Townsend | Democrat
Previous Next
Posted Friday, June 17, 2022 6:20 am
Ed Townsend

Geoffrey "Taylor" Walsh accepted the job at Lochmor in March of 2022 as the Head Golf Professional and a major program he already has started at Lochmor will be Junior Golf with a Camp program every Saturday from 11 a.m. to 1 p.m.

Taylor commented, "I look forward to the opportunity to work with the Sullivan County community to grow the game of golf in the place of my residence. I take great pride in being part of Sullivan County golf, as it's been very good to me through the years."

Born in a golf family, Taylor, 42, was born February 8, 1980, the son of Geoff and Betty Walsh, who make their home in Napanoch. Geoff, for the past four years, is the PGA golf professional at the Town of Fallsburg Municipal Tarry Brae golf course. This year Geoff also assumed the duties of Town of Fallsburg Director of Golf.

Taylor attended and graduated from Ellenville Central High School and graduated in 1998. He attended the University of Florida from 1998-2000 majoring in Business Administration.

At the University of Florida Taylor was a member of the college golf team.

In 2002 at the age of 22 Walsh turned professional and played professionally in the Mini Tour level which Taylor noted was just below the third tier of the Professional Golf Association.

Taylor has been teaching golf since 2002 at various golf facilities in Florida and New York.

Walsh became a full-time resident in 2019 and makes his home in Wurtsboro.

Taylor noted that one of the major problems of playing golf professionally is successfully obtaining a full time sponsor.

As the head golf professional at Lochmor, Taylor offers golf lessons with rates ranging from $40 for half an hour and $70 for one hour both on and off the golf course.

Lochmor offers a golf range and a full service golf shop to the public.

The Lochmor golf facility offers terrific views and challenging play for golfers at every skill level. They have well groomed fairways and greens.

Lochmor was built in the prime of the economic boom during the 50's. At that time, many local hotels offered golf courses, so it only made sense for the Town of Fallsburg to design a golf course as well.

The 18-hole Lochmor golf course was designed by William F. Mitchell and opened in 1962.

From the black tees the shortest hole is the 165-yard par 3 ninth hole and the longest hole is the 580-yard par 5 twelfth hole. Several of the tougher holes are located near Morningside Lake and errant shots find watery graves. An interesting hole, if golfers play it safe, is the 501-yard par 5 fifteenth hole, which is almost totally surrounded by water. Careful and accurate approach shots will keep you dry.

There perhaps hasn't been a stronger critic of the LIV Golf Invitational Golf Series than Rory McIlroy.

Even after picking up his second consecutive win at the RBC Canadian Open last Sunday afternoon in Toronto, McIlroy couldn't help but take another shot at the controversial Saudi Arabian golf league.

Rory, like so many others, has ripped the LIV Golf series at seemingly every turn. The new league drew plenty of backlash and controversy throughout its opening weekend, too.

Critics called for LIV golfers to be banned from major championships for what some have called "supporting murderers," and a group of families and survivors of the 9/11 terrorist attacks wrote letters to several golfers in the new venture criticizing them for their involvement.

McIlroy continued his criticism of the LIV after posting his 8-under 62 to grab the two-shot win in Toronto.

The Town of Fallsburg Lions Club Alan Steingart Memorial Golf Tournament will be held Sunday with a portion of the proceeds going to support Hospice of Sullivan County.   The event will be held at the Tarry Brae golf course.

The scramble tournament will feature two divisions, Smackers and Hackers.

There is always a lot of talk around the golf course about pitching and distance control.

You know a lot of people stand up here with a good setup and pitch and they're just not sure how to perform.

These golfers are not sure if they should take a longer club and if you're faster or slower over the club selection.

There are a million ways to control the distance.

I always tell golfers when you're pitching we want to go shorter first.

A good tip to remember when pitching is make sure that your rear shoulder is moving through the golf ball as the rear shoulder continues to move the hands won't take over.

When you are setting up, put the ball in the center for a normal chip shot.

Speed is a factor in controlling the distance.