The days are getting warmer, the grass is turning greener and in some cases taller, too. We all strive to have a green well manicured lawn puting down lime, fertilizer and weed killers. 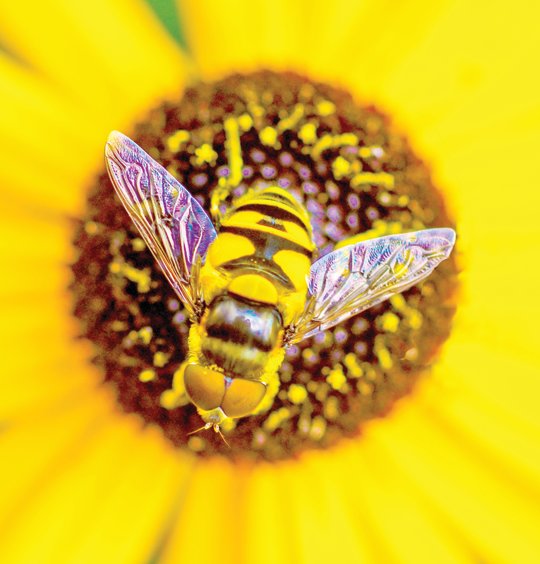 Pollinators are crucial to the overall health of the planet and if we can help them out by not mowing for one month, unsightly weeds are small price to pay for a healthy bee population.
Contributed Photo
Posted Friday, April 29, 2022 7:00 am
Jim Boxberger Jr. • Monticello Farm Home & Garden

The days are getting warmer, the grass is turning greener and in some cases taller, too. We all strive to have a green well manicured lawn puting down lime, fertilizer and weed killers.

I have sold this combo of products for the last thirty-nine years with great success, but this year, I’m telling everyone right now NOT to do it. In the month of May that is…Recently I heard a story on the weather channel that peaked my interest and I did some research.

Here is the headline: By not mowing our lawns in the month of May, we can increase honeybee populations by 500% in 2 years. Now here is the rest of the story. At Lawrence University in Appleton, Wisconsin, two assistant professors, Dr. Isreal Del Toro and Dr. Relena Ribbons started a study of bee populations in the Appleton area after they convinced the Appleton Common Council to endorse the “No Mow May” concept, a practice that first appeared in Great Britain and has shown great success.

The University began working with the Appleton Common Council, and, in 2020, Appleton became the first city in the United States to adopt No Mow May, with 435 homes registering to take part. Dr. Del Toro and Dr. Ribbons studied the impacts of No Mow May on Appleton’s bees. They found that No Mow May lawns had five times the number of bees and three times the bee species than did mowed lawns and town parks.

Appleton was the lone city at the start of the project in 2020, but by 2021 it had officially spread to seventeen townships in Wisconsin as well as four other states. This year the list spreads from Bangor, Maine to Billings, Montana as the results of repopulating natural bee populations have been remarkable.

Rochester, New York has officially signed on to the project this year as well. The concept is so simple, keep your lawnmower in the garage for an extra month so that the natural weeds and wildflowers can come up and bloom providing needed early season pollen for some of the hardest working insects in the world.

By providing an abundance of pollen early in the season, bee populations are able to expand much faster and produce queens that will in turn go out and form new colonies during the late spring and early summer. Up here in the North this is important for bees to do as early as possible so that new colonies can store enough honey to last them through their first winter.

If a new colony doesn’t have enough time before winter sets in, they will simply starve during the winter. So early season flowers like dandelions, white clover, bugleweed and chickweed though unsightly, provide a valuable service in the circle of life. Ask any beekeeper in Sullivan County and they will tell you that bee populations here have been under stress for some time now. This is an easy way to help get them back on their feet.

So let the weeds grow for a month, there will still be plenty of time to kill the weeds in June when the bees can focus their attention on all the other beautiful flowers that you plant or the garden in the backyard. Not to mention all the wonderful trees and shrubs that will be blooming throughout the summer.

Sometimes by not doing something so small, that we have been told to do our entire lives, like mowing the lawn, we can have a huge impact on the entire ecosystem. Pollinators are crucial to the overall health of the planet and if we can help them out by not mowing for one month, unsightly weeds are small price to pay for a healthy bee population.

You can research more on this topic at www.byobeez.org where the project all got started in Appleton, Wisconsin. And who knows, instead of selling you weed killer in the future, I could sell you a beehive instead…

How to tend to your lawn