LAKE HUNTINGTON- “People get ready, there’s a train a-comin’. You don’t need no ticket you just get onboard.”

Curtis Mayfield and the Impressions may have been … 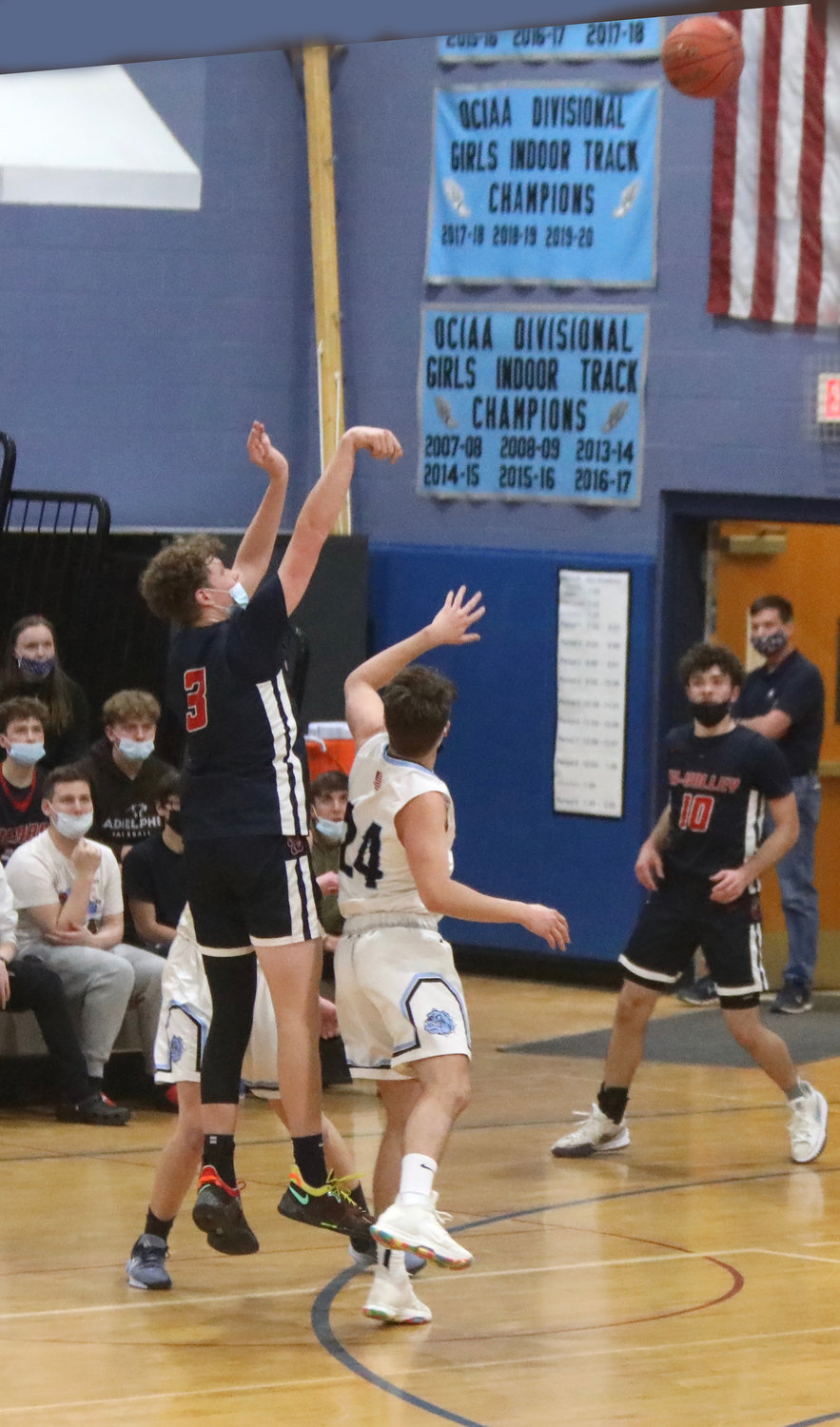 Tri-Valley’s Andrew Cox lofts one of his five three-pointers in the game. He finished with a game-high 22.
Richard A. Ross | Democrat 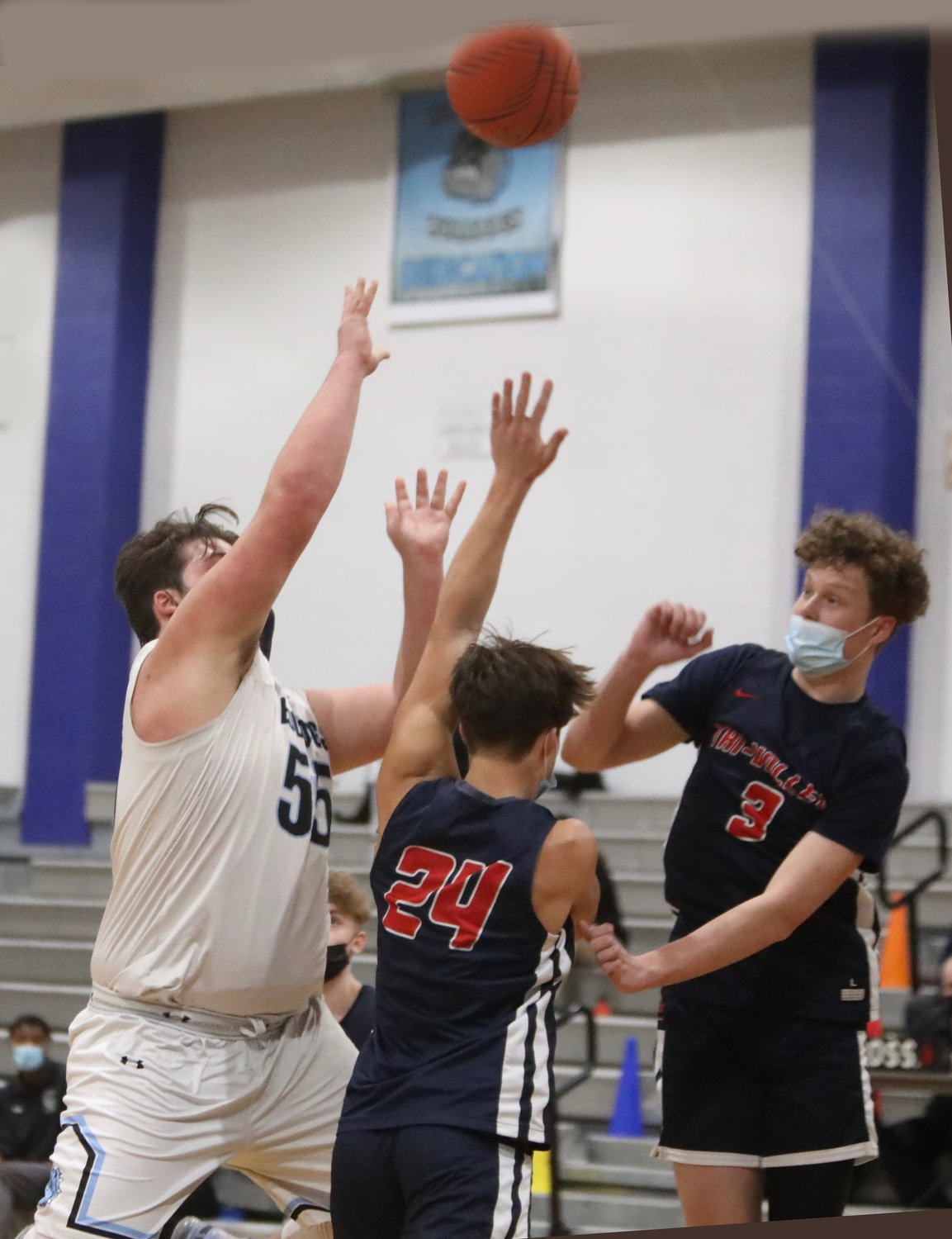 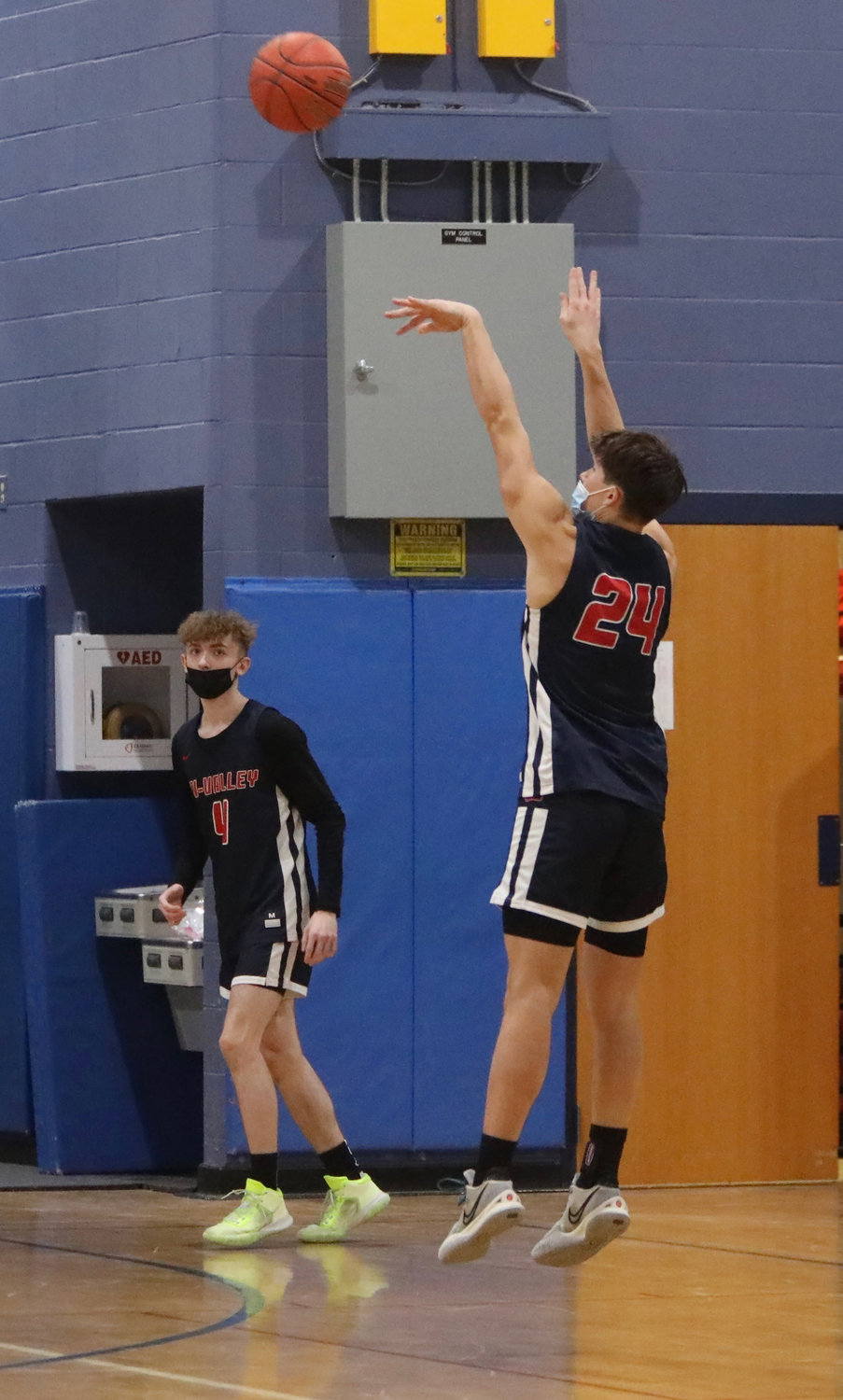 Tri-Valley’s Vanya Khodakovsky cans one of his two treys in the first quarter. He scored ten in the stanza but was held scoreless throughout the rest of the game.
Richard A. Ross | Democrat 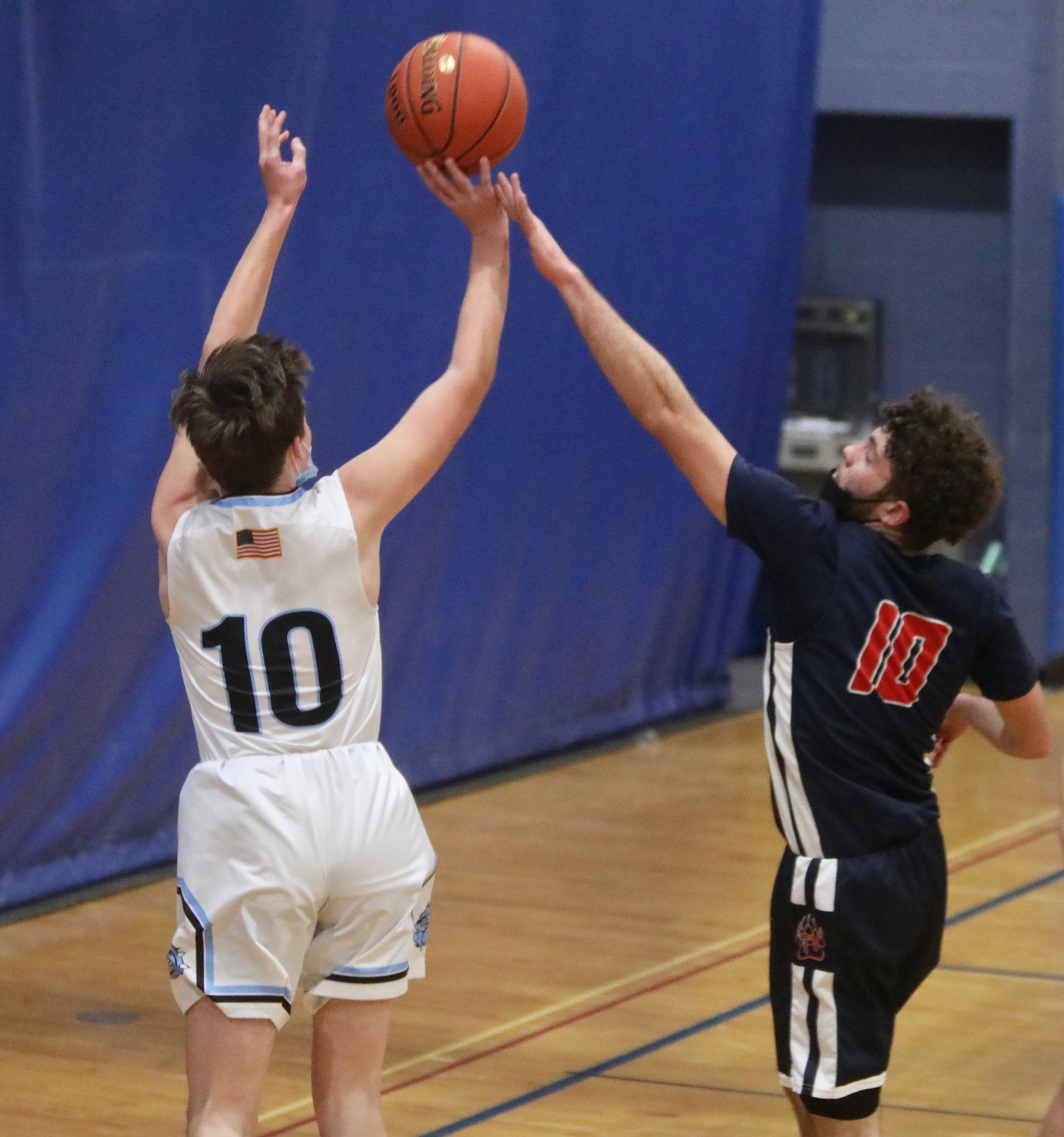 Sullivan West’s Matt Dubois shoots over Brian Kelly to nail one of his two fourth quarter threes. Those points were the deciding factor in a very close game.
Richard A. Ross | Democrat
Previous Next
Posted Tuesday, February 1, 2022 6:20 am
Richard A. Ross

LAKE HUNTINGTON- “People get ready, there’s a train a-comin’. You don’t need no ticket you just get onboard.”

Curtis Mayfield and the Impressions may have been singing about a train bound for heavenly glory, but the lyrics could aptly apply to the Sullivan West victory express engineered by Coach John Meyer and the sizzling Dawgs who extended their winning streak to five in a row with a dicey, defensive-oriented 49-45 league win over Tri-Valley. The win advanced their overall record to 7-3 with their last loss coming against Monticello in the Fred Ahart Foundation Games. Their league record stands at 1-1. The rabid Bulldog fans are ready to ride the rails into sectionals as soon as that ticket is punched. Their enthusiasm is legion.

Whereas the Bulldogs’ express train is speeding north towards that hoped-for sectional berth, Tri-Valley is chugging much more slowly and may have trouble reaching that same destination. The Bears are now 2-8 (0-3). Of the seven losses coming into last night’s epic fray, they were missing senior standout Andrew Cox for six of them. One of the premiere shooters in the Division, Cox can light it up from anywhere on the court with that high-arching floater, and on this night he’d do his share of damage with a game-high 22 points including five treys and three-for-three from the stripe.

Sullivan West Coach John Meyer was well aware that giving Cox open looks could spell disaster. “We’ve got to play great defense.” Meyer knew that Cox would get his points, but aggressive defense would put the pressure on the other players to score.

“We have to score at least 40 points tonight and we can’t afford to turn the ball over,” he averred in a pregame comment.

The way the game started, it seemed as if Meyer’s plan was not going to materialize, and it wasn’t Cox who was doing the initial damage. It was Vanya Khodakovsky, who poured in 10 of the Bear’s 16 points in the opening frame, including a pair of three-pointers. Cox had five points, but between those two a trio of treys floated through the cannister. Unfortunately for T-V, that was it for Khodakovsky’s scoring in the game. Sullivan West didn’t help their own cause with three turnovers in the first 1:45. What they did benefit from was Chris Campanelli’s presence under the basket. The “big fella” netted six points and Tariq Gambari posted five. The Bears led 16-11 at the end of one.

In the second quarter the turnover troubles switched sides as the Bears gave it up far too often. Sullivan West dominated the paint with great rebounding and second chance put backs to outscore Tri-Valley 13-8. The result was a game tied at 24 at the half.

Both teams scored 13 in the third and the game was knotted up at 37 heading into the final stanza. The deciding offensive factor for the West was Matt Dubois who hit a pair of timely threes as the Dawgs outscored the Bears 12-8. Those threes proved to be the difference makers. Sullivan West was six-for-eight from the strip (75%). Tri-Valley was nine-for-12 (66%). Dubois has a dagger shot from beyond the arc. He needs to be a little less tentative and let it fly more often.

The Westies faced S.S. Seward last night at home. They will play them again down in Florida later in the week. Tri-Valley travels to Chester on February 3 for a league game. The Bears need to run the table on their remaining league games in order to qualify for sectionals by accruing a .500 division record.

Tri-Valley Coach Kevin Delaney acknowledged that every time these two teams play it’s a war. “All those second chances really killed us especially early including a couple of missed layups coupled with panicked pressure and turnovers. Those things really hurt. They move the ball well,” he admitted.

Coach John Meyer was extremely upbeat. “We had too many turnovers early on. But we played really good defense tonight. Andrew Cox is one of the best players in our league and we held him down pretty well. We wanted to force them to make somebody else try to beat us. We were patient. We haven’t seen a 1-3-1 all year but the kids adjusted to it, and thank god Matt Dubois came alive with those two threes, and they weren’t gimmies.”

As to Campanelli’s play in the post, Meyer noted, “If he can be patient and finish, he can help us win games.”

Campanelli’s size and physicality are a matchup problem for opponents. Just as it was in football, opposing coaches are trying to figure out ways to reduce his impact. So far, those efforts have been to little avail. “It was a great overall-team effort. We’ve got Seward twice next week and I’m hoping we can do the same kind of things.”