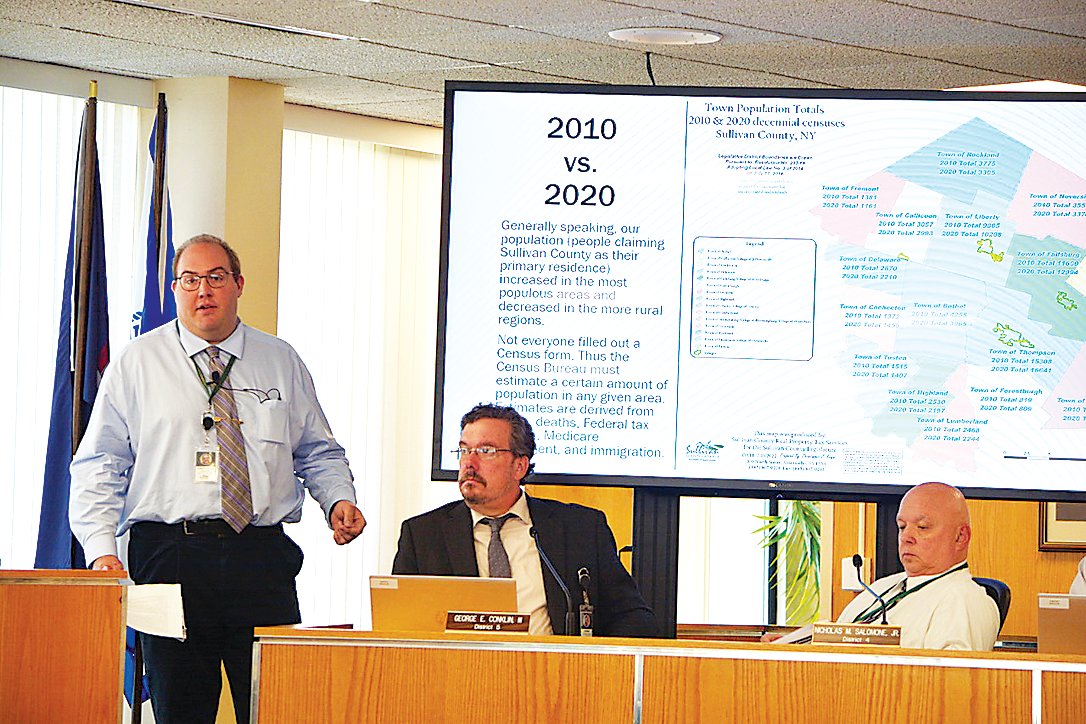 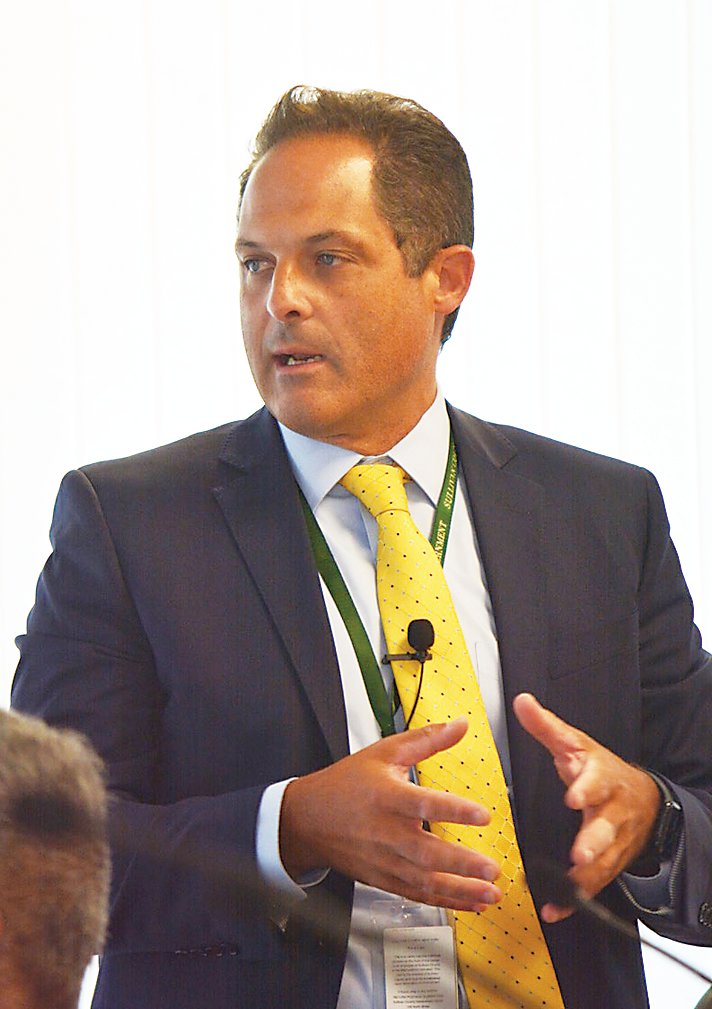 County Manager Josh Potosek explains the redistricting process to the Legislature and members of the public.
Joseph Abraham | Democrat
Previous Next
Posted Tuesday, August 16, 2022 6:10 am
By Joseph Abraham

SULLIVAN COUNTY –– The Sullivan County Legislature redistricting process continued on Thursday with a public hearing on the three map-based proposals currently being considered. The public hearing featured a presentation by County Manager Josh Potosek and Director of Real Property Tax Services Chris Knapp that can also be found on the County’s website. It was followed by comments from the public and further discussion amongst legislators.

Knapp and Potosek discussed how Census data, municipal boundaries and State law impact the redistricting process. State law requires that legislative districts encompass equal-size populations, and furthermore, there cannot be more than a five percent difference between the most and least populous districts. The mean or average number of people in any legislative district, using 2020 Census data, should be 8,627, the two officials explained. The three map-based options represent no more than a .41 percent variation between districts.

Another major consideration are population changes, more specifically, how in the past decade, rural areas of the County generally saw a population decline, while the County’s more populous areas saw their communities grow.

The Legislature also had a few requests of the mapmaker, which included not putting two legislators in the same district, not using political data and to try to not split villages.

Comments made by the public after the presentation were critical of the Legislature, with many taking aim at the process, and some even asking for additional maps to be made.

District 7 Legislator Joe Perrello asked about the possibility of the mapmaker, Dave Heller of Main Street Communications, coming up with three other options, describing the maps presented as “very similar.”

“He did most of the work already,” said Perrello. “He’s already got his numbers in order. So if he has to start changing things around to make people happy, maybe we should tell him to come up with another three options. We’ll extend the public hearing, keep it open and bring out three more maps … I’m just throwing it out there.”

District 2 Legislator Nadia Rajsz reiterated a previous request about having Heller come speak with them for a Q&A on the maps. Legislative Chairman Rob Doherty reminded her that he refused to do so.

“It’s not in his RFP [Request for Proposal] to come and talk to us,” said Doherty.

District 5 Legislator George Conklin said the Legislature could talk about the maps until the time the next Census comes out, but of the nine of them, he believes there would still be someone unhappy with the result.

“We all agreed to do three maps without input from the Legislature, which, to my knowledge, Josh [Potosek], and Chris [Knapp] are the only ones that had input into these three maps. At this point, we’re not drawing lines over uranium mines here,” said Conklin. “It’s important, obviously, as we heard from the public, and everybody has their own ideas, but no matter what we do, at the end of the day, somebody’s not going to be happy.”

When legislators contracted with Main Street Communications, they instructed Heller to not have contact with any legislator while creating the maps, and if anyone attempted to contact him, to inform Potosek. Potosek and Knapp were the only County officials Heller was instructed to speak with throughout the process.

Last month, Minority Leader and District 8 Legislator Ira Steingart told his peers that he’d like for County Attorney Michael McGuire to ask for an affidavit from Heller to see who from the County he had been in contact with, aside from when he appeared at a public meeting, as well as a discussion between him and legislators in an executive session.

On Thursday, Steingart said he still hadn’t gotten an answer and wanted to know if the question had been asked.

Doherty turned to Potosek and asked if Heller had informed him of anyone attempting to contact him. Potosek said Heller did not.

Steingart said he wasn’t clear previously and asked the same question, but included the timeframe between when the RFP was awarded to when Heller met with legislators before making the maps.

Doherty said on the Friday that Heller got the contract, Heller called him and he gave him Potosek’s contact information.

“And that was the extent of our conversation,” said Doherty. “I said ‘this [Potosek] was the man that was in charge, you have to talk to him.’”

Steingart said he couldn’t see why they couldn’t get a response from Heller, regarding that question.

“If he wants more money to be questioned here, I can understand that, you know, the contract, the way it was worded,” said Steingart, “but you’re talking about something that’s going to be [in effect] for 10 years. There should be no outside influence. So I’d like to have, in writing, an answer to that.”

Steingart added that it would be a waste of time, if they were going to go the route of asking for new maps, to do so without direction or criteria of what their concerns are with the three maps already provided.

Legislators eventually decided to recess the public hearing until this Thursday, August 18 at 8:30 a.m.

While legislators have a January deadline to make a decision on the maps, Knapp and Potosek stressed a tighter timeframe. Once the new districts are codified into law, the Sullivan County Board of Elections (BOE) will have to redraw affected election districts to match.

“They [Knapp and the BOE] have a lot of work to do for electorates [and also] people running for office to know what district they’re in,” said Potosek. “So really the September timeframe is probably for us, administratively, the last we’d look for you to entertain a map at that point.”

Knapp explained that NYS law dictates that modification of election districts is solely a function of the BOE, and that it’s a time consuming process.

“All of that needs to be done by February 15,” said Knapp. “But of course, all of that will be coming around the time that there are elections in November. So BOE is going to be busy with that while I’m busy tabulating all of the changes and preparing maps for them to look at and understand what needs to be done.”