His name comes up very often and that is because he is one of the better bowlers in Sullivan County. 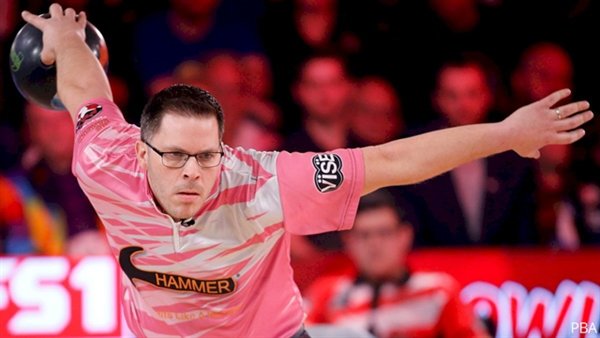 Bill O'Neill has dropped out of the PBA Players Championship as he has tested positive for the coronavirus.
CONTRIBUTED PHOTO
Posted Thursday, February 4, 2021 12:00 am
Ed Townsend - Columnist

His name comes up very often and that is because he is one of the better bowlers in Sullivan County.

Pedro Agapito III once again leads the 700 scoring column with a big 750 in the Friday Night Mixed league at Kiamesha Lanes. Pedro maintains a 233 average in this league as he smashed the maples for single games of 225, 268, 257.

After testing positive for the coronavirus last Sunday morning, Bill O'Neill, the defending champion at the PBA Players Championship, will not participate in the regional stepladders.

Like the rest of the field, O'Neill participated in regional qualifying last weekend and last Saturday began exhibiting symptoms consistent with the coronavirus. He was tested last Sunday morning and told FloBowling the test came back positive.

“I was getting congested and then right before I went to bed I got really cold,” O'Neill said of the symptoms he experienced Saturday night. “I developed a fever over the night and never could get rid of the chills. Luckily my fever broke a little bit ago so hopefully it stays that way.”

O'Neill's flight to Florida had been scheduled for 7:30 a.m. on Sunday but instead of heading to the airport, he went and received a rapid test. That test came back positive, forcing him to officially cancel his plans to compete in the event.

“I'm obviously disappointed in the timing but many people have lost way more because of this pandemic,” O'Neill said. “So, hopefully I'm OK, and if that's the worst thing to happen to me then I'm good. I'm just concerned about my family being OK at the moment.”

At the East Region qualifying event in Richmond, Virginia, last weekend, O'Neill said he took precautions to avoid contracting the coronavirus. He said he could not specifically pinpoint that he contracted it at the event but said he hasn't gone many places since.

Asked if he wore his mask the entire time at the regional qualifying site, O'Neill said he did.

“I recently got contacts specifically so I could bowl without having to remove it at any point,” O'Neill said. “The only time I lowered it was to eat and drink.”

O'Neill advanced out of the East Region as the No. 5 seed and his stepladder was scheduled to be recorded Monday for future broadcast, leaving time for the PBA to identify a replacement for the show.

Top seed François Lavoie advanced to the PBA Players Championship Finals, striking in a one-ball, sudden-death roll-off to defeat third seed Keven Williams. As the higher seed, Lavoie had the choice of order and lane for the roll-off. He opted to bowl first on the left lane, a reversal of his pre-game belief that the right lane would be better for him.

“In hindsight, I should've finished the game on the left lane,” said Lavoie. “After I left the 1-2-4-8 on the right lane in the eighth frame, I knew I made the wrong decision to finish on that lane. I thought I could just keep the speed up and throw it to the spot and it would hook, but after the 1-2-4-8, I realized I didn't have that much room to miss.”

After Williams rolled the back five strikes for 232, Lavoie had a chance to win the match in the 10th frame—on the right lane—by striking twice. He rolled the first strike but left a 4 pin on his next shot. A spare tied him with Williams, requiring a sudden-death roll-off to decide the winner.

“I never got super comfortable on the lanes,” said Lavoie, “and when it came time for the roll-off, I didn't want to mess around with the right lane anymore. I wanted to be done with it, throw one good shot on the left lane and see what happened.”

With a strike to begin the roll-off, Lavoie forced Williams to match in order to extend the match. Williams, who had just closed his 10th frame with three strikes on the left lane, was unable to get another, leaving a 7 pin to end his tournament.

The only player in the Southwest Region Finals with a PBA Tour title, Lavoie owns four of them, including two U.S. Open titles. A win in the PBA Players Championship would be Lavoie's third major championship and fifth title overall, which would make him performance-eligible for PBA Hall of Fame consideration.

Lavoie joins West Region winner Anthony Simonsen in the PBA Players Championship Finals, which will feature the winners from all five regions competing for a major championship title and a top prize of $250,000.

The USBC does absolutely nothing to preserve the integrity of the game, they only minimally regulate bowling balls and allow bowling centers to put out conditions that are so forgiving that honor scores are really a thing of the past as they are so common today for league bowlers.

As putting out tougher house shots would undoubtedly result in the loss of a large percentage of house bowlers ... the PBA softening up the pro patterns is really the only viable alternative.