That's one of the many phrases Monticello Varsity Boys Basketball Coach Chris Russo repeats often, challenging his team to be relentless on the defensive end. … 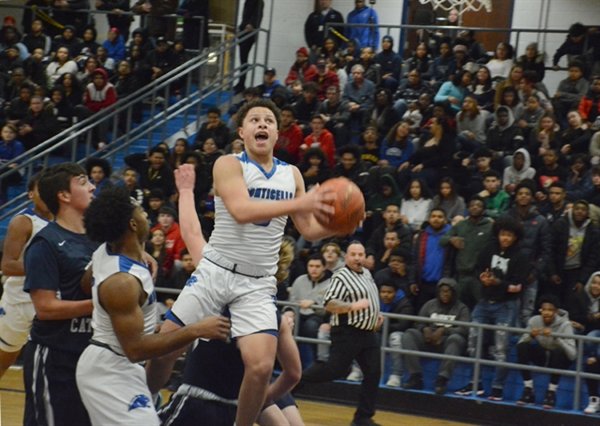 Jordan Ruggiero cuts through the Burke defense with ease on the way to two of his 19 points of the evening.
JOSEPH ABRAHAM | DEMOCRAT 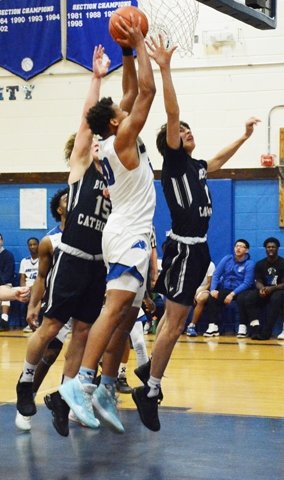 Monticello's Damorn Hall-Rucker led all scorers with 21 points in Tuesday's win over Burke.Jordan Ruggiero cuts through the Burke defense with ease on the way to two of his 19 points of the evening.
JOSEPH ABRAHAM | DEMOCRAT
Previous Next
Posted Thursday, January 30, 2020 12:00 am
Joseph Abraham - Co-Editor

That's one of the many phrases Monticello Varsity Boys Basketball Coach Chris Russo repeats often, challenging his team to be relentless on the defensive end. When they do that, they're tough to beat. Just ask the visiting Burke Catholic Eagles who were the recipients of a 66-49 drubbing at the hands of the Panthers in Tuesday night's league contest.

When asked about the keys to his team's victory, Russo said, “Two things. First our defensive intensity. We were able to create turnovers and get buckets off that. And the second was the pace of the game. I tell the guys we need to be disruptive defensively, and when we do that, good things happen.”

Tale of the tape

First quarter -- The Panthers jumped out the gate to garner a 19-11 lead after the first quarter of play. The Eagles hung around due to some timely treys, but Monticello's press was too much for them to handle and loose balls turned to easy points early. Ruggiero and Hall-Rucker accounted for 12 (seven and five respectively) of the team's first quarter points.

Second quarter -- This was easily the most evenly matched eight minutes of the game, with Monticello outscoring their opponents 17-15 to take a 36-26 advantage into the break. Gattling and Hall-Rucker had seven a piece to pace the Panthers' offense.

Third quarter -- The Panthers pulled away in the third, scoring 16 to Burke's seven points, to take a 52-33 lead into the fourth quarter. Hall-Rucker scored the most points for the Panthers in the third with six points off a two-pointer and four FTs.

Fourth quarter -- Ruggiero and Hall-Rucker helped pad the Panthers' lead with six and three points respectively in the final minutes of play. And the Monticello starters got some rest thanks to valuable minutes from their bench. Despite the Eagles outscoring them 16-14 in the fourth, it wasn't enough and Monticello held on for the 17-point victory.

“I was really happy with how we played,” Russo said. “The guys on the bench were live and ready to come in and our starters were unselfish. It was a great team win for us.”

With seven teams in their division (OCIAA Division III), the Panthers (7-5, 5-2 OCIAA) need one more league win to clinch a sectionals berth, and they have that opportunity tonight when they host Goshen in the BCANY Coaches vs Cancer Classic at SUNY Sullivan.

9am -- Manor vs. Fallsburg Boys