JEFFERSONVILLE - Monticello, Liberty and Sullivan West’s baseball and softball teams met up on Mother’s Day for Sunday doubleheaders. The tournament was originally scheduled for Saturday, … 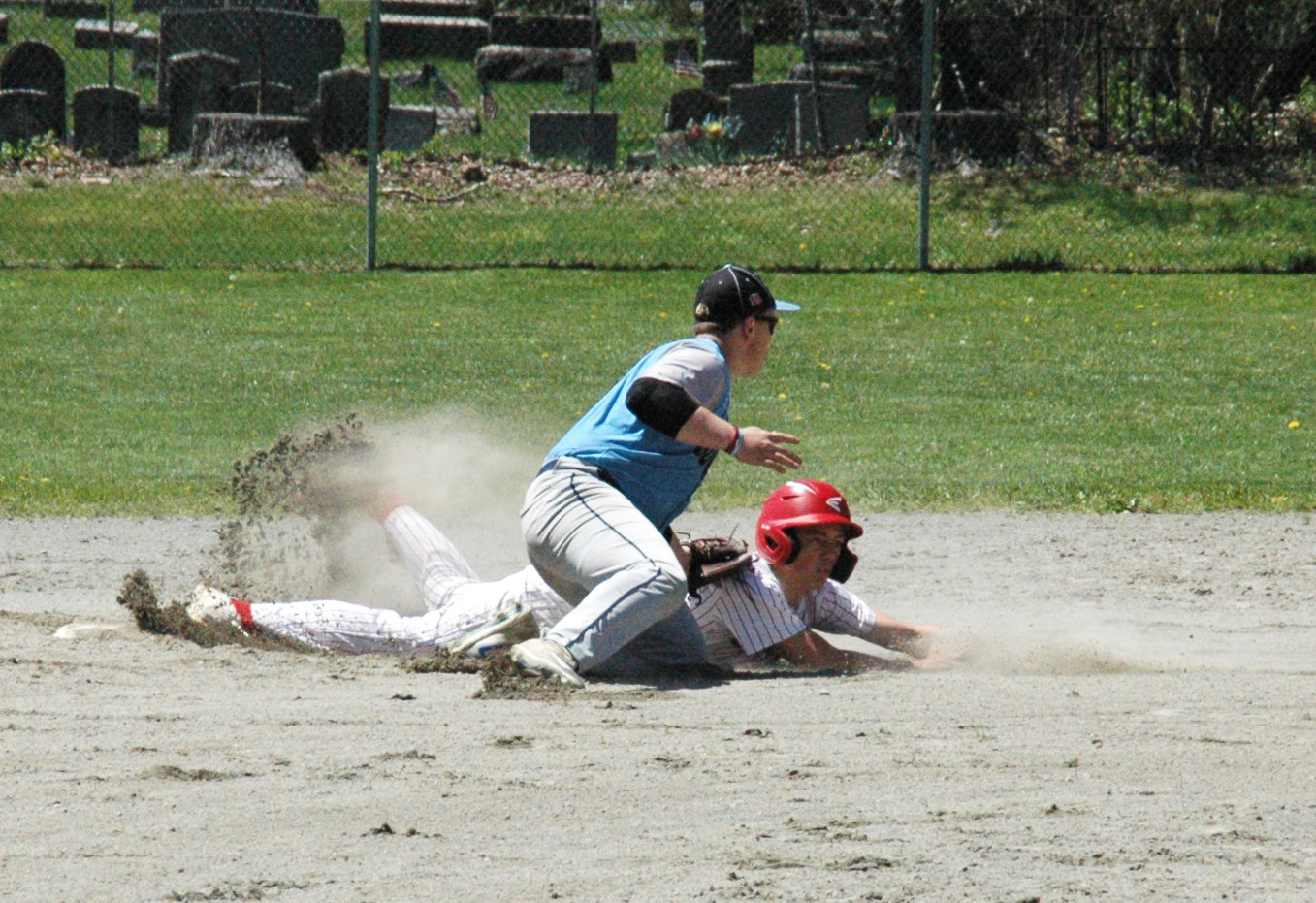 Liberty’s Tanner Bury slides safely underneath a tag. He had it working on both sides of the field, earning the win on the mound and getting two hits and three RBIs in the win over Sullivan West.
Anthony Morgano | Democrat 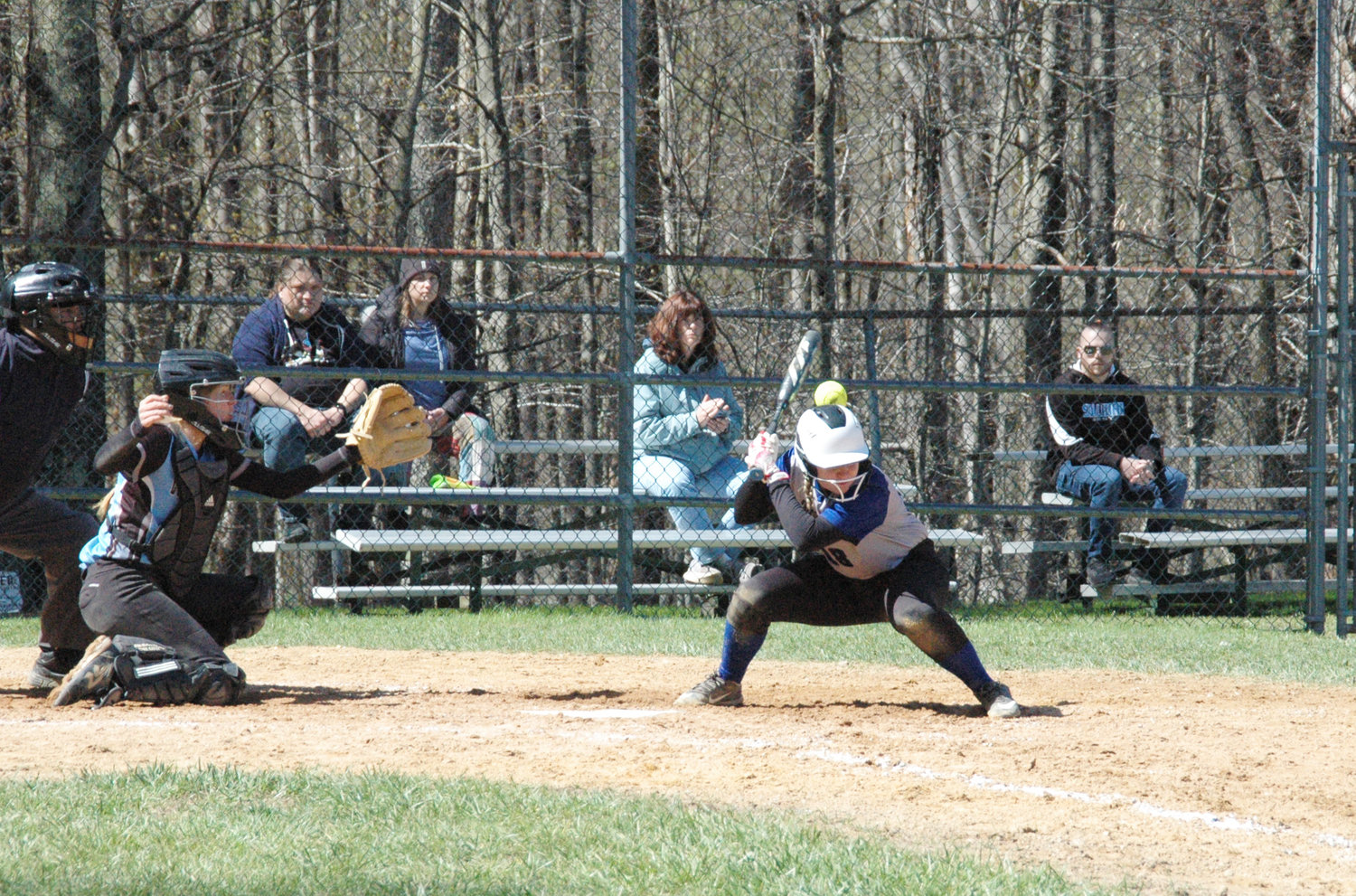 Monticello’s Alexandra Cushing ducks underneath an inside pitch in the first round of the tournament. Cushing reached base three times, and scored in the top 6th in the come-from-behind win over the Lady Bulldogs.
Anthony Morgano | Democrat 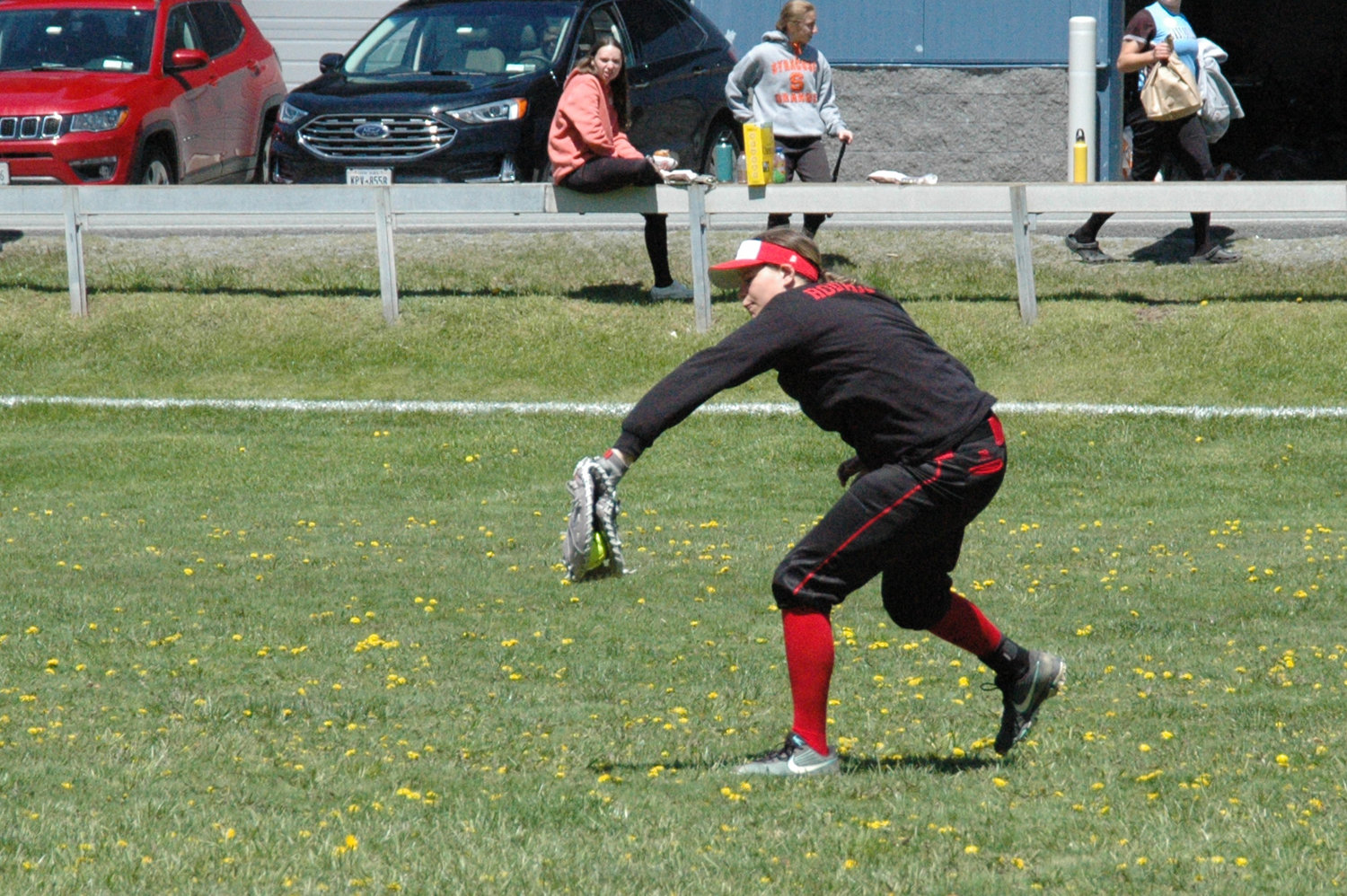 Liberty’s Angelina Rodriguez races in and reaches down to catch a ball and robbing a base hit. The Lady Indians scored six runs in the top of the 7th inning but fell just short of catching up to Monticello.
Anthony Morgano | Democrat 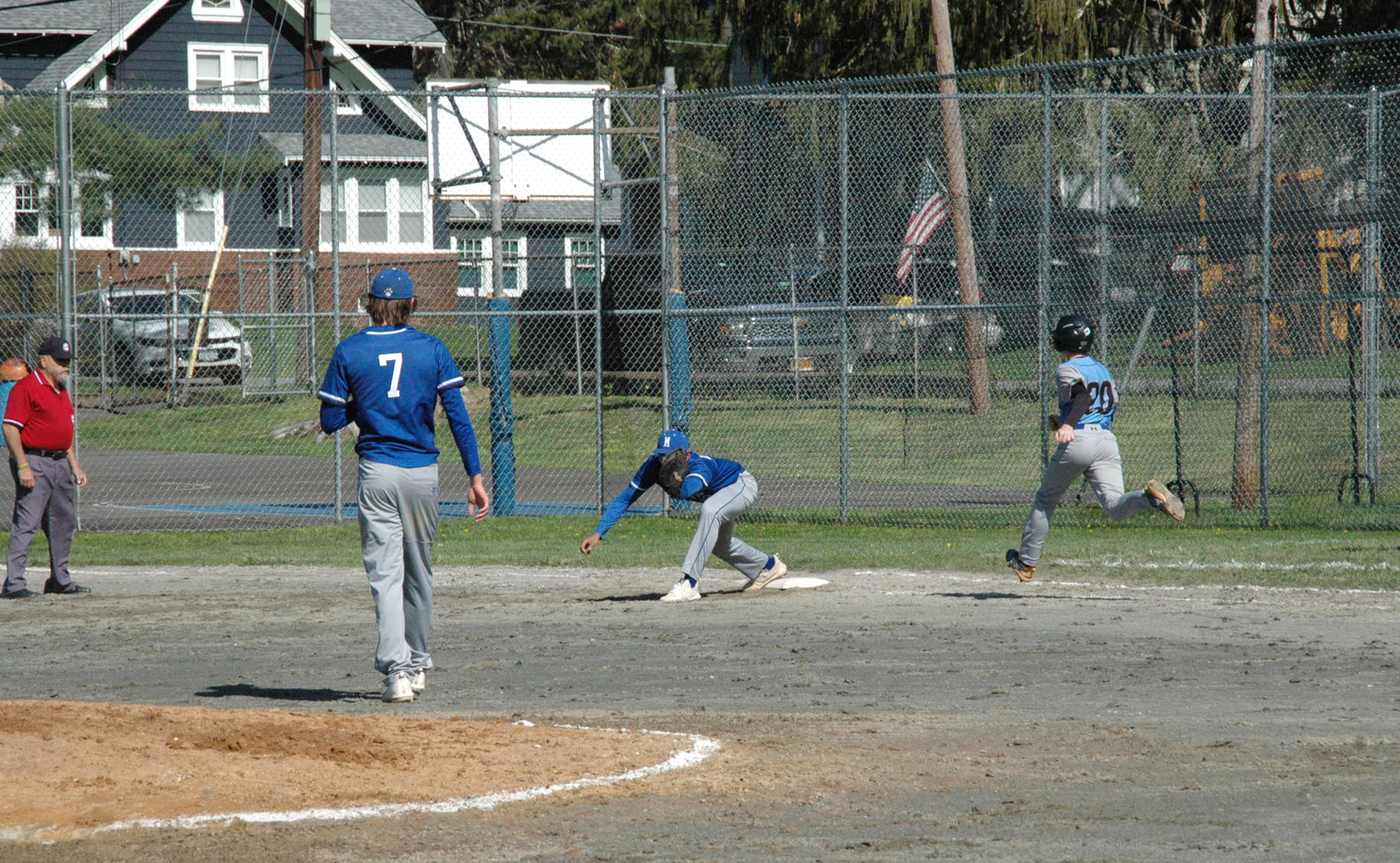 Panthers first baseman Ayush Patel stretches to get the out.
Anthony Morgano | Democrat 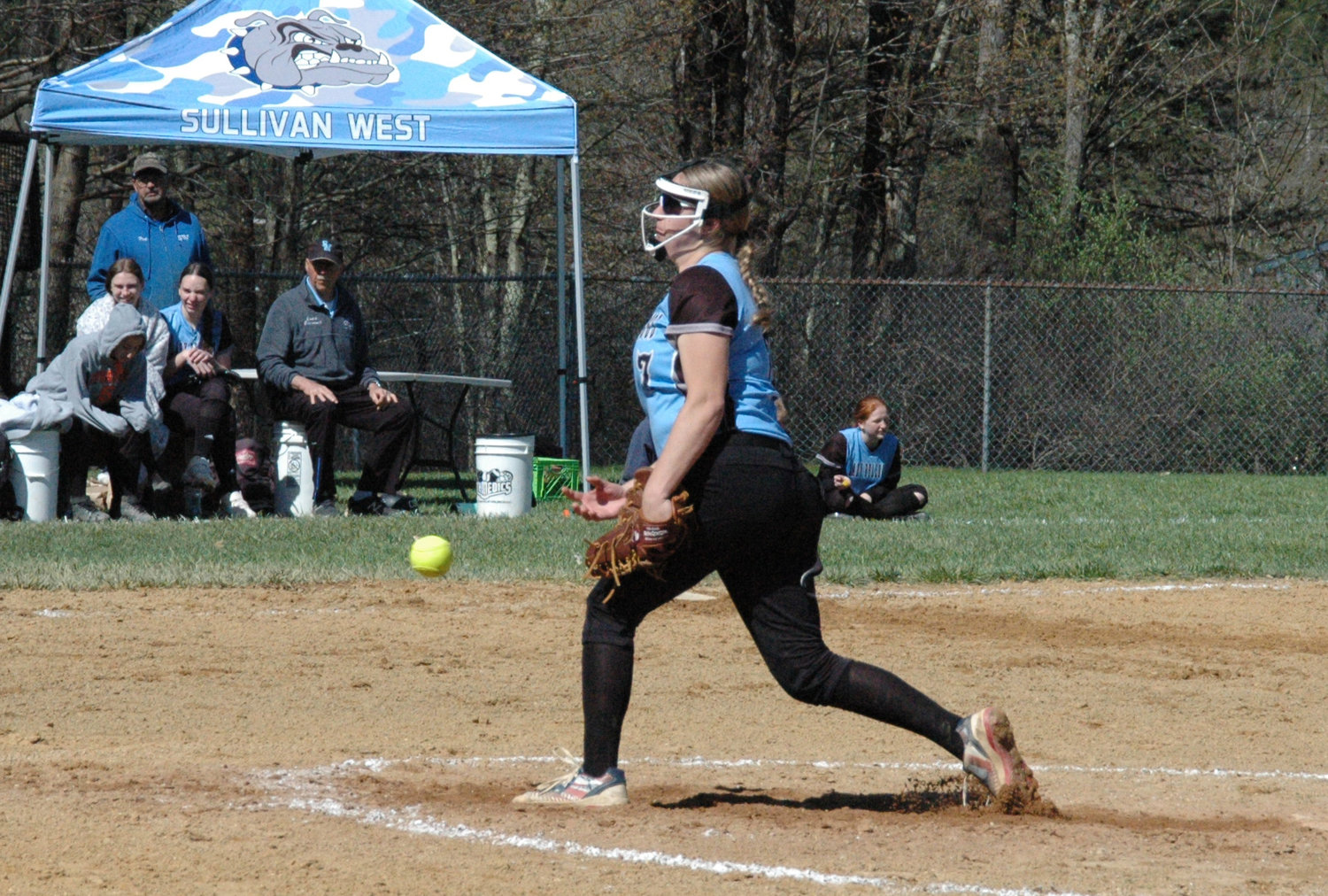 Riley Ernst had the pitching duties for Sullivan West in game one of the tournament against Monticello.
Anthony Morgano | Democrat
Previous Next
Posted Friday, May 13, 2022 6:20 am
Anthony Morgano

JEFFERSONVILLE - Monticello, Liberty and Sullivan West’s baseball and softball teams met up on Mother’s Day for Sunday doubleheaders. The tournament was originally scheduled for Saturday, and Roscoe’s baseball team and Livingston Manor’s softball teams were set to play and round out the tournament, but were unable to take part on Sunday. The schedule was updated to reflect those changes, and the three baseball and softball teams rotated playing each other throughout the day. Waiting the extra day was a great call, because the overcast skies on Saturday cleared up in time for a warm and sunny Sunday for the tournament.

In the early matchups, beginning at 9 a.m., Sullivan West hosted Monticello. The Panthers and Bulldogs were tied at one after the first inning, but in the fifth inning, the Panthers plated three runs to take a 4-1 lead, and added two more insurance runs in the seventh for a 6-1 win. SW’s offense never got going, collecting only three hits, while also making seven errors in the field in the loss.

On the other side of Jeffersonville, the Lady Panthers and Lady Bulldogs had a close contest. Monticello kicked things off early, scoring two in the top of the first, but Sullivan West responded quickly with three of their own in the frame. Monticello briefly tied it at three apiece in the second, but the Lady Bulldogs tacked on a run in the 3rd and 4th to make it 5-3. In the fifth and sixth, it was Monticello that chipped away, scoring four unanswered runs and taking a 7-5 lead. The Lady Bulldogs were able to get the leadoff run across in the home half of the seventh, but went down in order after that to lose 7-6.

In the second round of the tournament, Monticello and Liberty battled in baseball and softball. Much like the first round, Monticello handily won the baseball matchup, while the Lady Panthers squeaked out a one-run victory.

Liberty got on the board early, plating three runs in the top of the first, but Monticello quickly evened it up at three by the end of the first inning. Liberty scored their fourth and final run of the game in the second, and the rest of the scoring was all Panthers. A four-run second inning, a two-run third, and four insurance runs in the fifth gave Monticello a 13-4 win over Liberty.

The Lady Panthers jumped out to a big lead against Liberty, outscoring the Lady Indians 8-1 through the first six innings. Monticello seemed to be in the driver’s seat, until the top of the seventh, when Liberty made a comeback bid. The Lady Indians chipped away until the Monticello lead was whittled down to one. The Lady Panthers were able to secure that final out for the 8-7 win, and with that, won the tournament.

The Bulldogs had an early 3-1 lead over Liberty after the first inning, but the Indians started piling on in the middle innings, outscoring Sullivan West 12-1 from the second to the sixth. SW added another run in the bottom of the seventh, but it was a 13-5 win for Liberty baseball. Tanner Bury pitched 5.1 innings giving up just two earned runs and striking out seven. Bury also had two hits and three RBIs.

Elizabeth Reeves was lights out for the Lady Bulldogs in the final game of the afternoon. Reeves pitched a complete game, allowing only two hits in the shutout. Liberty put the ball in play the entire game, only striking out one time against Reeves, but the Lady Bulldogs were a brick wall behind her, making it look easy en route to a 16-0 win. Liberty’s pitchers were only tagged for eight hits and four walks, but errors hurt the Lady Indians, as Sullivan West leaped out to a 15-0 lead after three innings, before adding one last bit of insurance in the fourth.