My boyfriend's aunt was nice enough to let me tag along this summer while she gave me all her best pickling recipes. We recently made crocks of dill pickles, jars of dilly beans, and most … 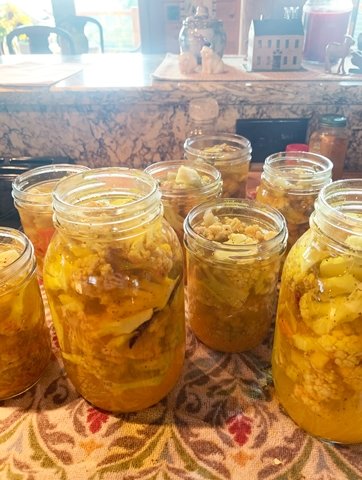 My boyfriend's aunt was nice enough to let me tag along this summer while she gave me all her best pickling recipes. We recently made crocks of dill pickles, jars of dilly beans, and most recently…pickled cauliflower.

I picked up some cauliflower from Diehl's farmstand, available at the Livingston Manor farmers market. This recipe is really special, with a heavy hand of sugar adding to sweetness, and a nice pop of turmeric for color, it's both sweet and tangy. It's perfection. I am also not a seasoned “canner” like many people I know, so I had no idea about the boiling of the lids and jars for sterilization.

Pro tip: boil all your lids, as well as your jars. Make sure there is no food on the lid or outside edges, as this will not seal the jars properly and cause rotting. Don't worry, this cauliflower won't last long, anyway.

Begin by simmering your sugar, vinegar, water, and spices for about 15 minutes until the water is boiling and the sugar is reducing into a syrup. While that simmers, blanch your cauliflower into boiling water for about 2 minutes and pack into jars with sliced yellow onion, and some pepper for spice if you'd like. Strain your hot syrup into the jars over the veggies and seal, letting stand for 15 minutes. Make sure your lids seal on the top and you're ready to eat them in a few days!

This is one recipe you will want to cut out and keep. Happy canning!

Claire Stabbert is an accomplished cook who loves to try new recipes. While she does enjoy eating at restaurants, she also loves to whip up a good meal at home. Claire gets some of her cooking inspiration from her grandfather and grandmother, Fred and Shirley Stabbert as well as Great Grandma Nellie.