Playoff picture is coming into focus

As our teams continue down the path of the regular season, there are a few teams that are leading the postseason charge. Roscoe and Sullivan West have both dominated in league play so far, each …

Playoff picture is coming into focus 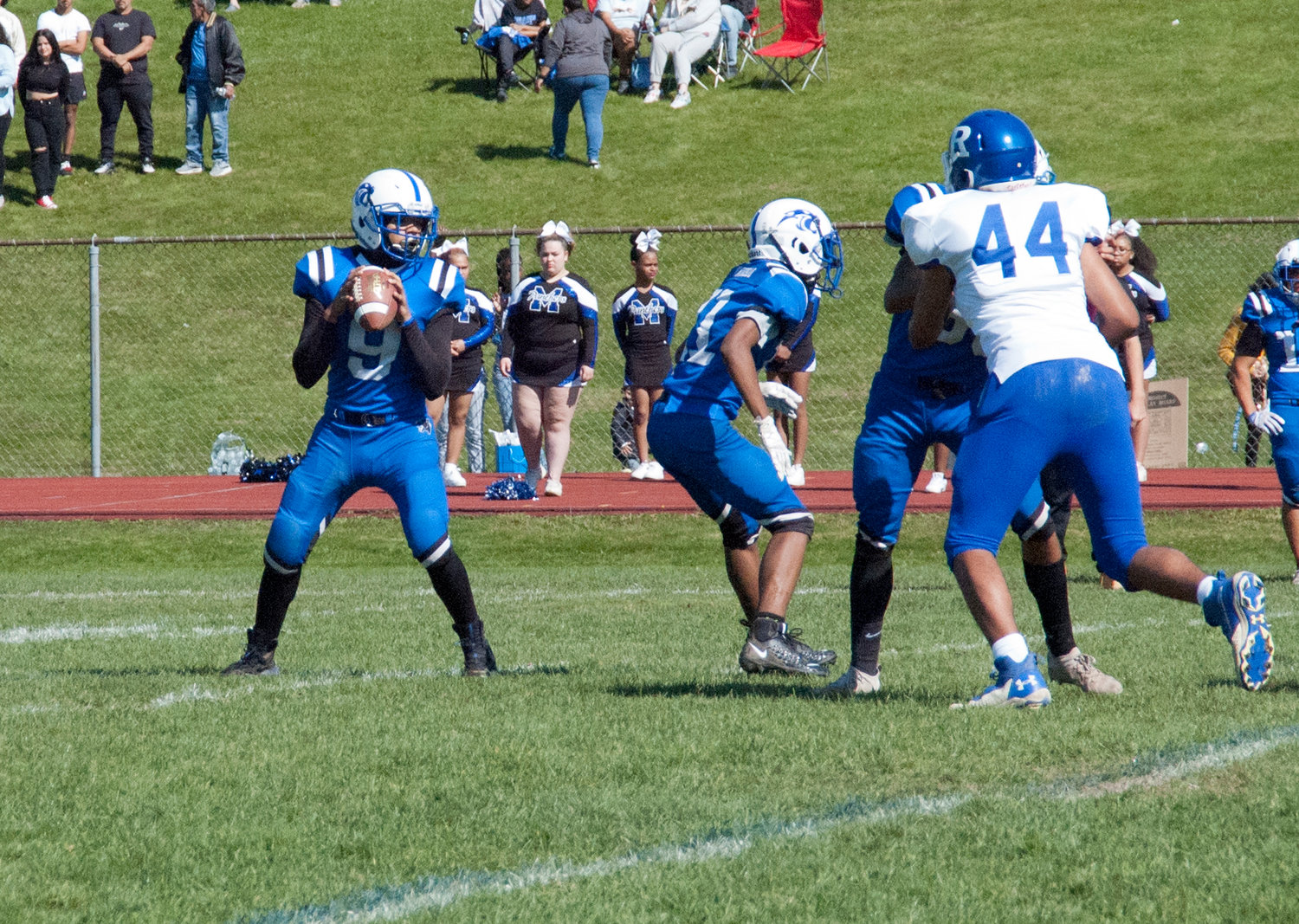 Monticello Panther’s quarterback Xavean Mitchell drops back for a pass. Monticello will be heading to Beacon tonight for a non-league matchup in Dutchess County.
Anthony Morgano | Democrat 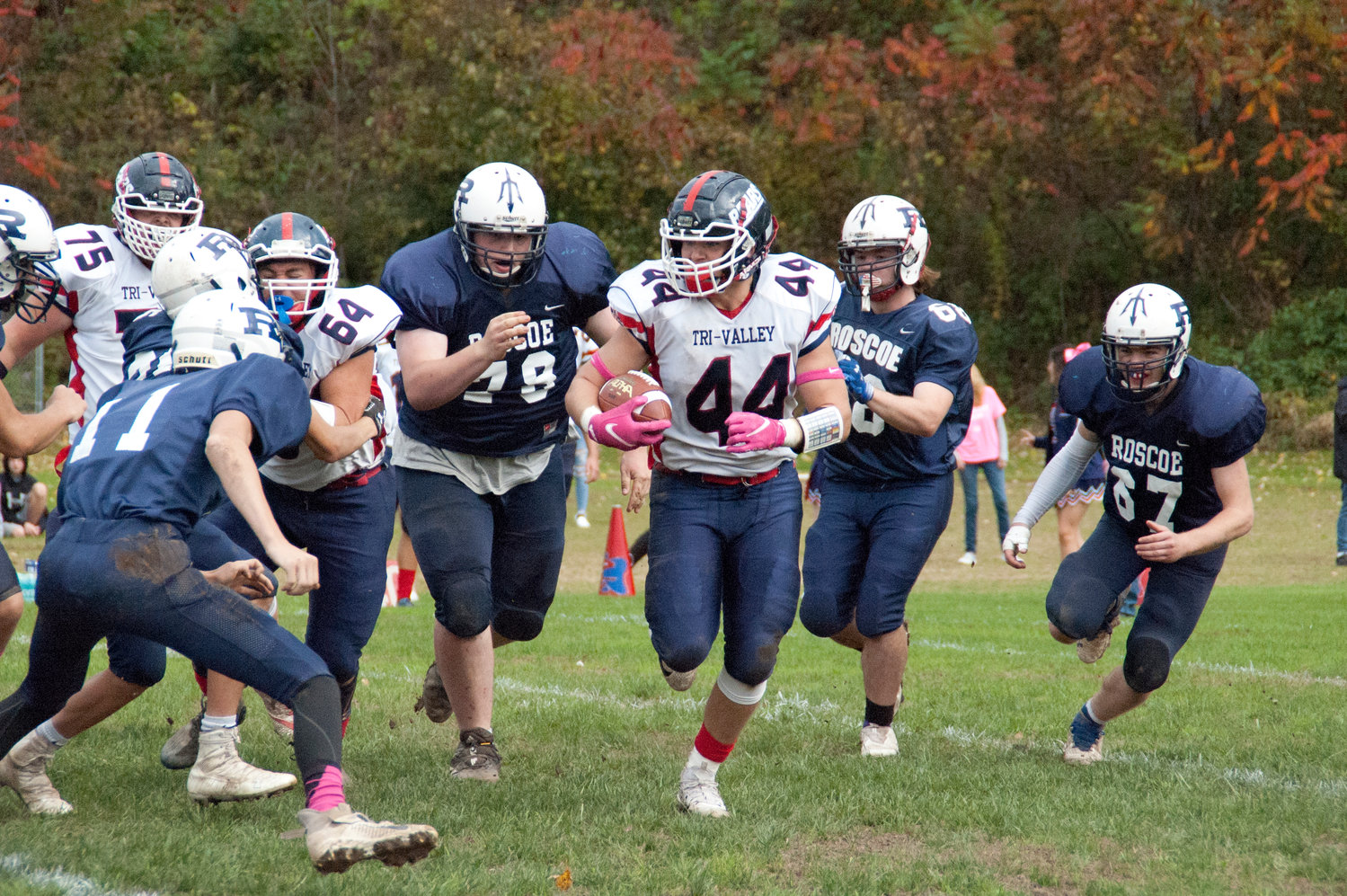 Tri-Valley’s Dylan Poley has been on a mission, consistently driving the ball up the field through contact. The Bears will look for their first division win this afternoon against the Comets.
Anthony Morgano | Democrat
Previous Next
Posted Friday, October 15, 2021 6:20 am
Anthony Morgano

As our teams continue down the path of the regular season, there are a few teams that are leading the postseason charge. Roscoe and Sullivan West have both dominated in league play so far, each starting off with an undefeated 3-0 record. A postseason appearance is coming into focus for the top teams, while the bottom four are either on the cusp, or on the outside looking in. Ellenville, the only out of county school in the division, has two league wins now, and is currently sitting in third place in the division, another playoff hopeful. With all of the buzz of the postseason looming, let’s look and see what our county teams have going on tonight:

Tonight under the lights

Tri-Valley has had a tough time this season. After opening their season with a win over Onteora, the Bears have dropped their next four games, three of which came against league opponents. The 1-4 Bears are winless in the division, (0-3), and will hope to get a win on the road against Fallsburg. Fallsburg, another 1-4 team, sits in 4th place in the division after defeating Eldred in a league matchup earlier in the season. For the Comets to make it to the post-season, they’ll need to defeat the Bears and Ellenville, both at home, in the next two weeks. As far as playoff implications for this game are concerned, the Bears can effectively eliminate the Comets with a win today.

The Indians have yet to win a game, and they have a tough challenge ahead of them tonight as they face Marlboro on the road. Marlboro is sitting comfortably in second place in the division, outscoring opponents 110 to 27 in four league games. Liberty is the only winless team in the division as they enter Week 6.

The Panthers have had a hard time slowing their opponents down this season, and Beacon has had a tough time scoring through four games. Although Beacon has a 3-1 overall record, their three wins have been close, while their one loss was a blowout against Wallkill last week, 28-3. Hopefully Monticello can replicate what Wallkill was able to do defensively last week and earn a win over Beacon.

The Blue Devils have found themselves atop the 8-man division after two disappointing non-league losses to start their season. Their defense has steadily improved since then, with a shutout win over Ellenville, and a combined nine points allowed against Fallsburg and Tri-Valley. Roscoe will be in Eldred tonight for a matchup against the Yellowjackets, who have struggled with injuries this year. The Yellowjackets have yet to win a game this year, but they have had a few competitive games and they play with a lot of heart.

This is without a doubt the game of the night, and since there are no county football teams in action tomorrow, the game of the weekend as well. The Bulldogs have been an unstoppable force through their first four games, easily defeating each of their four opponents. Ellenville, on the other hand, has a division loss to Roscoe, but has since found its stride, winning each of their last two games. Both of these teams are playoff hopefuls, and the game under the lights will end with one playoff team firmly in the spotlight. Can Sullivan West stay as hot as they have been, or will Ellenville’s current momentum be enough to upset the visitors tonight?