MONTICELLO - “The time has come the walrus said to talk of many things” wrote Lewis Carrol in “The Walrus and the Carpenter.” In the realm of local high school basketball, … 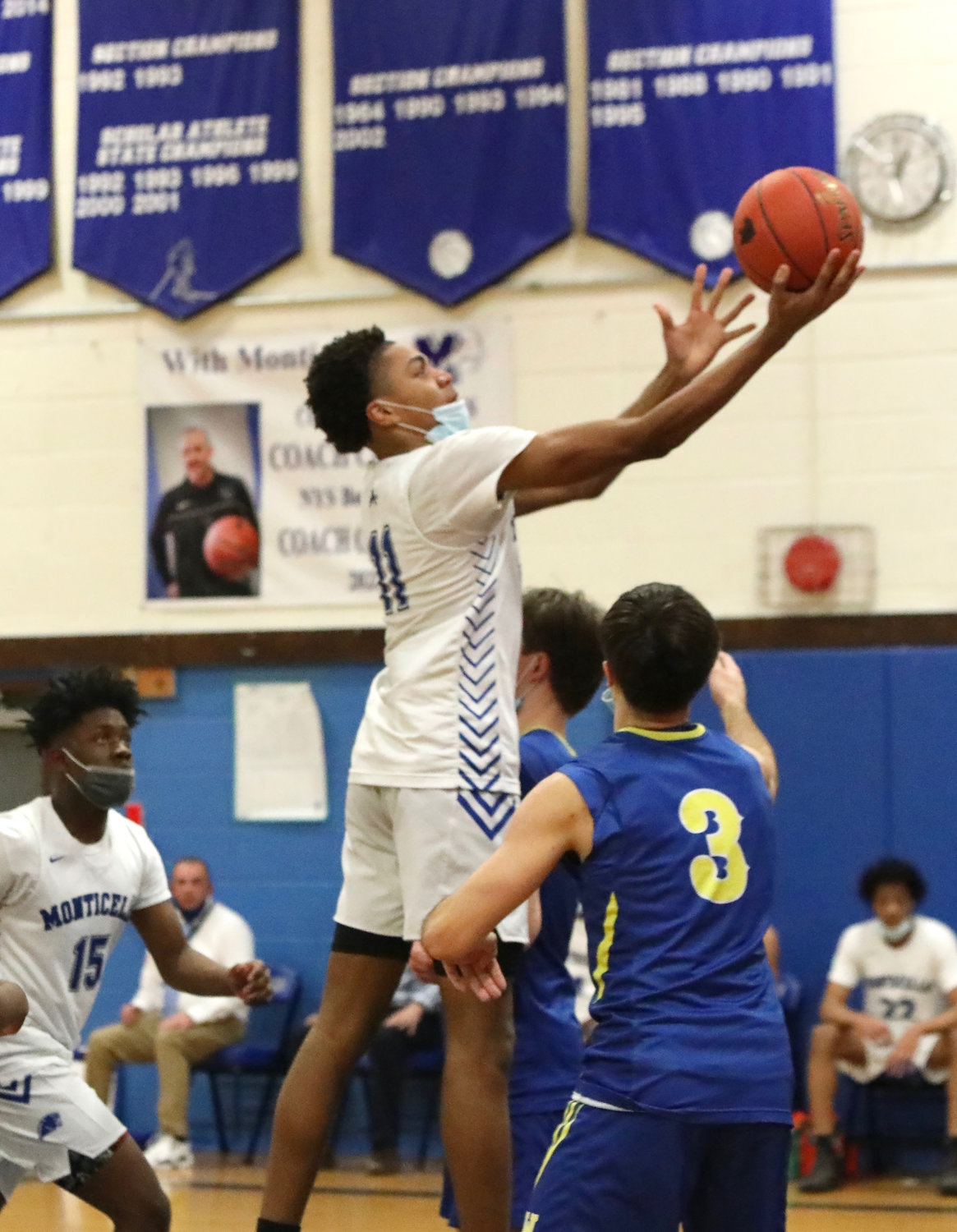 Monticello’s Michael Mingo shows that deft touch as he elevates for two points. Mingo had 13 points in the win. He scored nine of those in the fourth quarter including five-of-seven from the stripe.
Richard A. Ross | Democrat 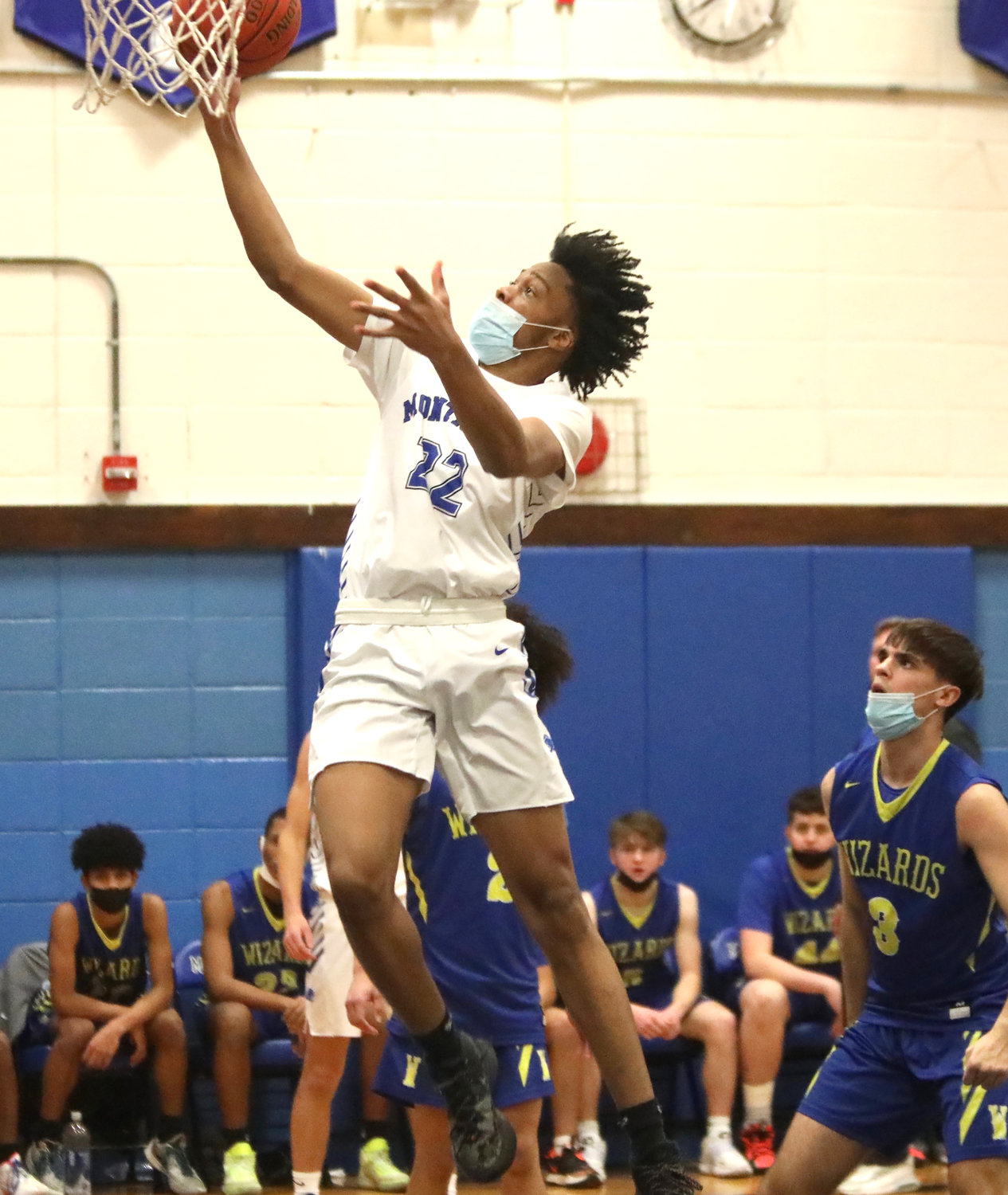 Monticello’s Dylan Hardy goes up strong in the early going. He ended up with a double-double with 14 points and 11 rebounds in unquestionably his best game of the season.
Richard A. Ross | Democrat
Previous Next
Posted Friday, January 28, 2022 6:20 am
Richard A. Ross

MONTICELLO - “The time has come the walrus said to talk of many things” wrote Lewis Carrol in “The Walrus and the Carpenter.” In the realm of local high school basketball, those things being spoken about are needed league wins. To wit, Monticello got one of those gems in a 54-46 hard-fought clash on their home court, known as “The Pit.”

The dicey victory brought them one vital step closer in the race to make sectionals. Speaking of races, in riveting NASCAR races like the Daytona 500, the difference between winning and losing can be how efficient cars are serviced in the pit. Those things done to get the car ready for its next turns around the course, often can make all the difference, especially if something is going wrong with the race car. In Monticello’s “Pit,” between segments of rapid play, Coach Chris Russo, the 2020-21 NYS Boys Basketball Coach of the Year, fine tunes what is going on before setting his players loose to further execute his game plan.

Wins are at a premium now and the pressure is on if the Montis are going to make it to sectionals. For them, as well as the visiting Washingtonville Wizards, each remaining league game could be the deal maker or the deal breaker as both need to reach .500, which means accruing six league wins. The Panthers used key pit stops to offset a slow start to this fray. They were trailing 9-4 at the end of the first quarter against a rival that beat them in the first outing. In that game, the Panthers played without senior Michael Mingo and though they were tied at 19 at half, Coach Todd Rose’s guards torched them in the latter part of the game and the Wizards came out on top 53-39.

In the rematch, what Monticello showed all night was resiliency. They bounced back with an efficient second quarter to take a 22-18 lead into the break. It was almost two points more. Pedro Rodriguez hoisted up a three pointer that went in the air before the buzzer, but it hit hard off the backboard and another Monti put it back in. The ball was ruled dead after it hit the backboard.

In the first part of the third quarter the Wizards went on a run and took the lead back, but once again the Montis wouldn’t fold. In that riveting third quarter Washingtonville took a 29-26 lead, but the Panthers closed with an 11-2 run to lead 34-31 by the end of the quarter.

The feisty Panthers reached down deep and reversed the polarity. Fourth quarters have been the Panthers’ bugaboo this year, but this time they outscored Washingtonville 20-15. Free throws were big as Monticello knocked down 13-of-20 (65%), while the Wizards only canned three-of-ten (30%). Monticello's Dylan Hardy posted a double-double with 14pts and 11 rebounds, Michael Mingot had 13, and Joseph Russo added nine. Washingtonville's Brenden Graham led all scorers with 17pts, Ryan Allen added 13.

Washingtonville coach Todd Rose credited Monticello. “I thought they provided really good defensive pressure. We did miss a lot of easy shots. What was key for them was that they got a lot of second and third chance opportunities. They did a nice job on the offensive rebounds. We’ve got to go forward and play hard.”

They take on Cornwall tonight, a team they beat in the Glenn McGinnis tournament. That game didn’t count in the league ledger. Chris Russo was bubbling over with pride. “These guys play so hard for me and I love every second of coaching them. We need two more league wins and we’ll get into the sectionals. We’re playing so well, especially on defense. Michael played well and Dylan gets a huge rebound and kicks it out to Joe Russo for three. Free throws at the end iced the cake. It was a big win for us.”

The Montis face Beacon at home tonight in search of one of those three needed victories. Stay tuned, the fast cars are heading into the latter part of the race and in the Pit and on the road, Coach Russo will look to fine tune the engine and hopefully get enough wins to make the postseason race where teams will vie for the chip.