The second annual Liberty Police Benevolent Association (PBA) Poker Run in 2021 hosted a memorial motorcycle ride for one of their fallen brothers, Sheldon "Pickles" Zweck who was lost to the … 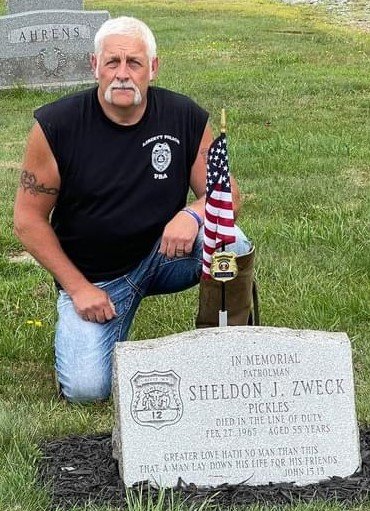 The second annual Liberty Police Benevolent Association (PBA) Poker Run in 2021 hosted a memorial motorcycle ride for one of their fallen brothers, Sheldon "Pickles" Zweck who was lost to the community on the night of February 27, 1965 while executing an arrest.

This poker run took place on August 14 and was organized by Cathy Herbert, an employee of the Village of Liberty Police Department and treasurer of the Liberty PBA.

Cathy noted,"The Liberty PBA is humbled yet again by the outpouring of support from the community and businesses that all came together to make this annual event another great success."

The Poker Run ride started at the Liberty Firemen's Park with approximately 100 people participating in various ways and, with over 50 motorcycles and multiple other vehicles, were led by Liberty Police Chief Steven D'agata as the group traveled to the Liberty Cemetery where honor and respect were paid to Officer Zweck by the entire group.

The ride continued to the Beaverkill Covered Bridge where group photos were taken and the ride then traveled to a section of the Catskill Mountains, along a section of the Downsville Reservoir, ending up for a stop at the Roscoe Prohibition Distillery Do Good where they met the incredibly welcoming folks from the Distillery.

The next leg of this great event continued through Western Sullivan County to the Cabin in Callicoon Center and then on to the Fosterdale Country Cafe where ice cream was enjoyed by all.

The event continued with a ride back to Liberty Firemen's Park where a chicken barbeque was enjoyed by all and poker hands were drawn from the various stops during the day and awarded. Raffle prizes donated by businesses throughout the Tri-State area were also rewarded.

The Liberty PBA is an outreach driven by the Liberty Police Department officers and staff that supports unfunded needs of the community, and they deserve a great big pat on the back for this memorial motorcycle ride honoring the late Sheldon "Pickles" Zweck.

The Future of Major League Baseball