As Panthers meltdown in second half

MONTICELLO - “The past is history. The future is a mystery, but the present is a gift.” That adage aptly applies to the arc of Monticello’s hoops fate this year. By now, No. 4 …

As Panthers meltdown in second half 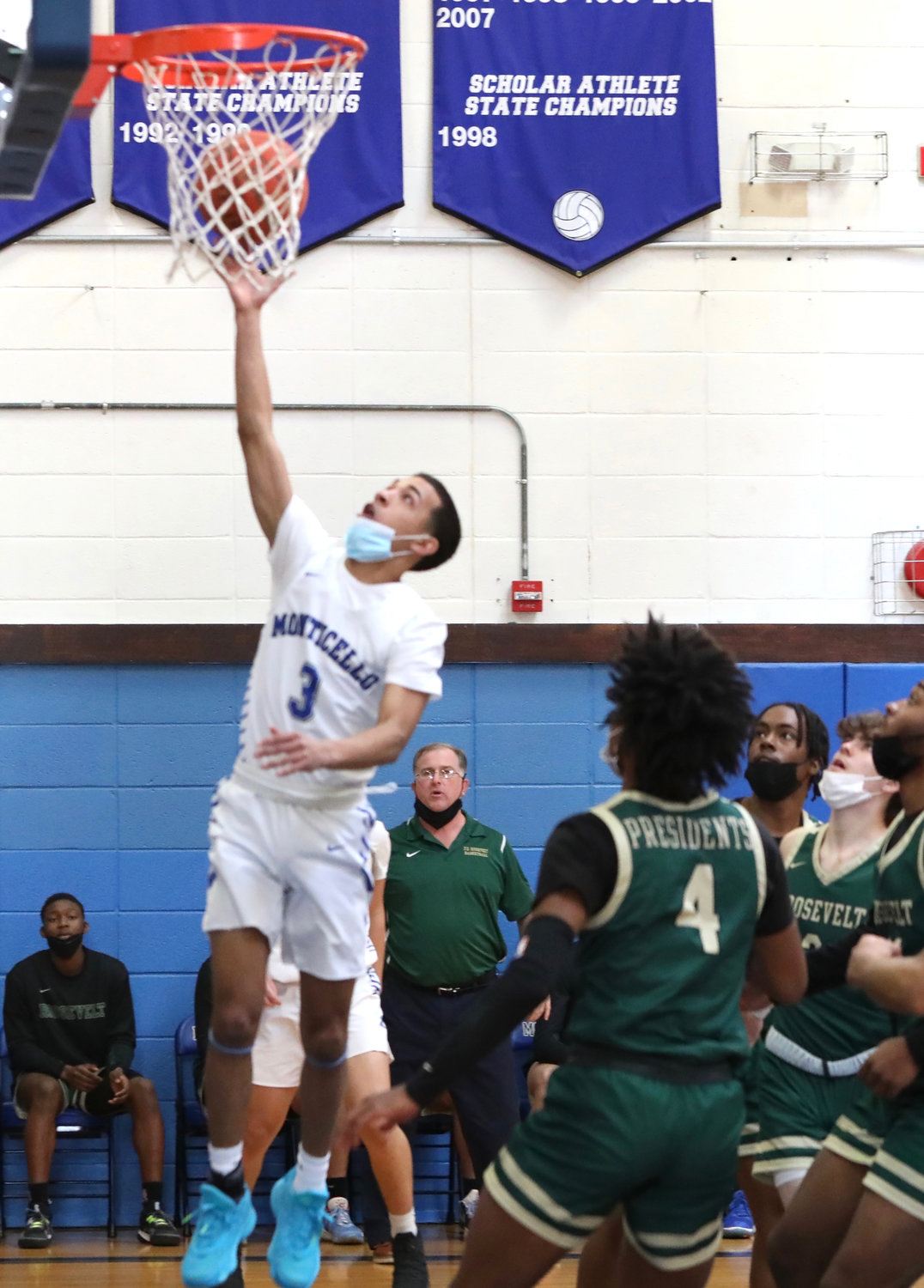 Monticello Captain Pedro Rodriguez does what he does best by slashing to the rim in the early going. But that was not a preview of coming attractions as the prolific guard only managed to score seven points in the sectional loss to FDR.
Richard A. Ross | Democrat 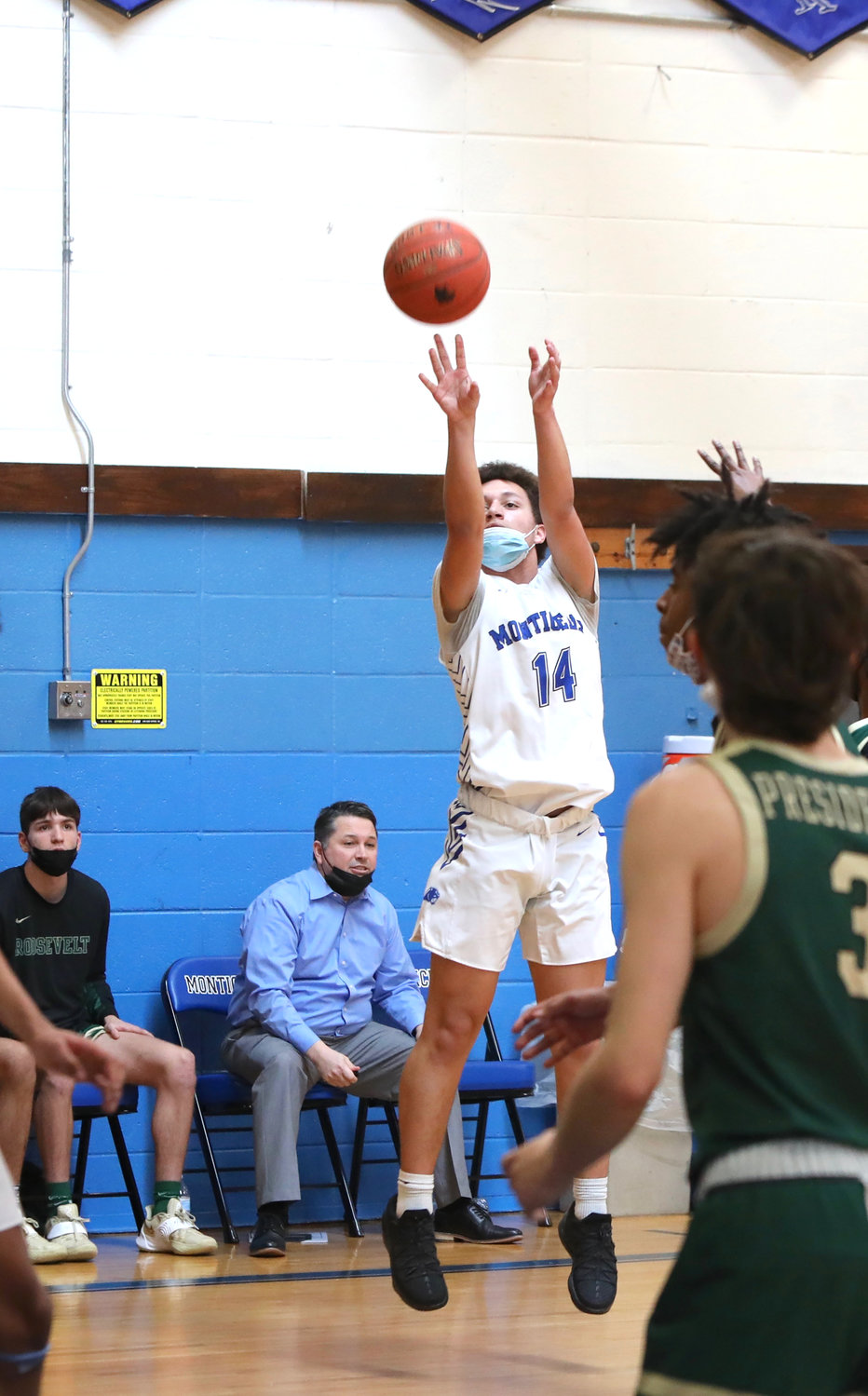 Monticello’s Shawn Jordan elevates for a three-pointer in the first quarter as part of the Montis’ early surge. Jordan had five points in the opening frame but managed only two more the rest of the game.
Richard A. Ross | Democrat 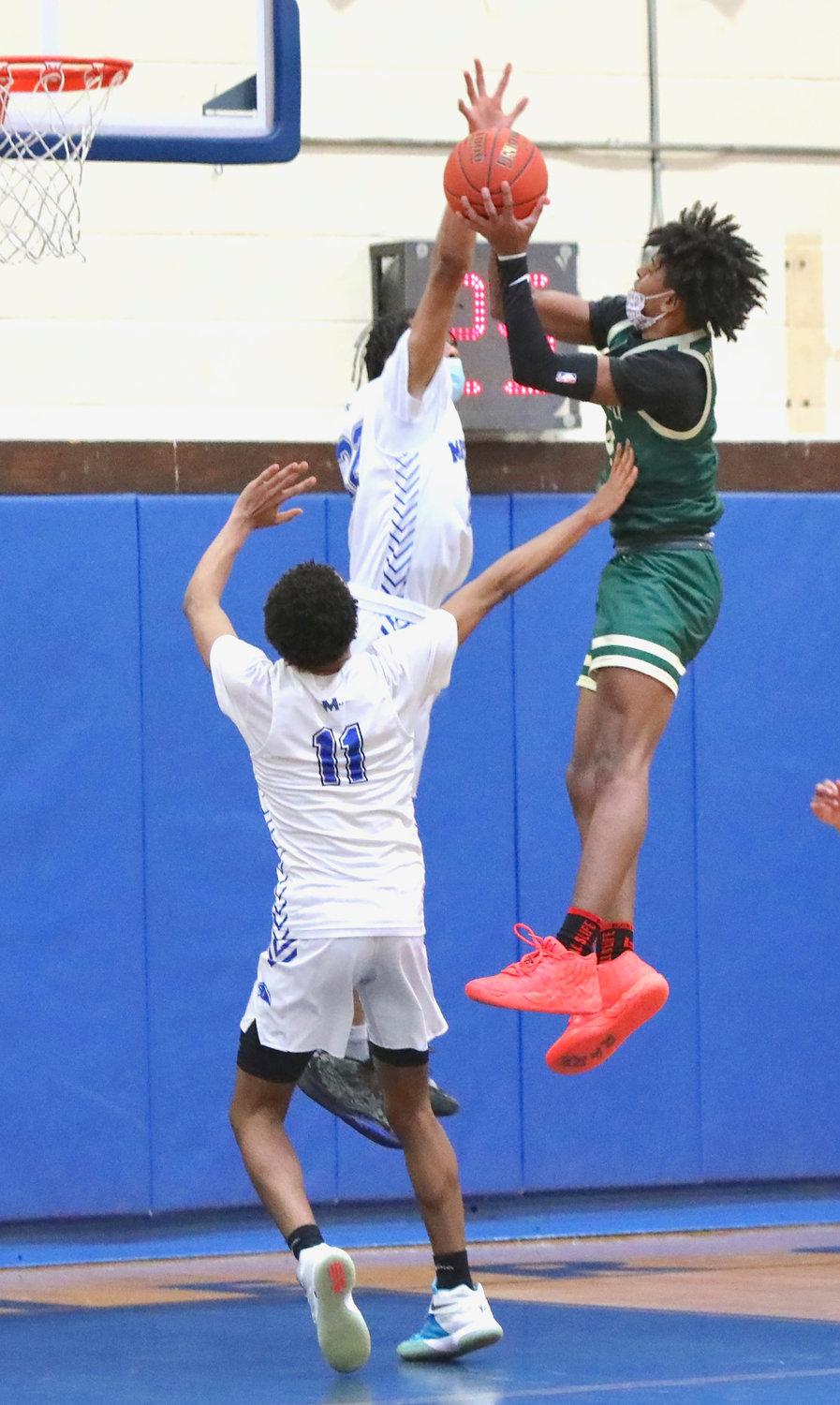 Monticello’s Dylan Hardy gets on top of the ball from an airborne Jordan Blue, the Presidents’ leading scorer to block this shot. Blue went on to tally a team-high 18 points in the win.
Richard A. Ross | Democrat
Previous Next
Posted Tuesday, March 1, 2022 6:20 am
Richard A. Ross

MONTICELLO - “The past is history. The future is a mystery, but the present is a gift.” That adage aptly applies to the arc of Monticello’s hoops fate this year. By now, No. 4 Monticello’s surprising 63-50 loss to No. 5 FDR has been heard about by most, but let’s go back to the early afternoon leading up to the game.

Monticello’s season was often riveting and uplifting. Aside from the thrashing they took against Goshen a week ago, the Panthers, who started the season at 1-3 with few things indicating an eventual trip to the sectionals, turned things north and not only made sectionals but landed a home game replete with the advantage of a stoked crowd in “The Pit.”

The present was turning into a well-earned gift. Their opponent didn’t appear to have a very impressive resume. Coming in at 7-10, the Presidents made the dance by virtue of a 3-3 MHAL divisional record. They beat Saugerties twice, a team that has struggled mightily to put it mildly and they split with New Paltz, a team the Montis beat in their first home game of the season.

Monticello Coach Chris Russo had seen them play against Cornwall and described them as “athletic.” So, the future for the anticipating Montis’ looked promising. In fact, most, if not all, of the Panthers were looking ahead to a rematch at Goshen tonight with hopefully different results.

After all, two years ago rival Goshen beat the Panthers twice in the regular season but the Josh Gattling, Jordan Ruggiero led Panthers stunned the Gladiators in the only game between them that counted. So given all of that, the present was indeed regarded as a promising gift.

And the game certainly began that way with the Montis doing what they do best: hitting timely threes, slashing into the paint and defending. But there were already signs that the Presidents were going to be more than the Montis had bargained for.

They played aggressive man-to-man defense, blocked shots and pressured the ball. Monticello still held sway though, leading 20-18 at the end of the first quarter and led by seven at the half, 35-28. Then the roof began to fall in. The Presidents went on a 14-0 run to start the third quarter and never looked back. They led 46-42 heading into the fourth quarter, but it still seemed like Monticello might turn the tide. Instead, the collapse became irreversible. FDR scored 21 points in the fourth quarter to Monticello’s four.

FDR Coach Kevin Hart said his team was far better than their record demonstrated and that their defense proved to be the difference. Both things turned out to be true.

Coach Russo emerged from a tough session with his downcast team.

“It’s not the way we wanted to end our season. We had a bad start to the third quarter, and we never recovered. We were up seven and down seven in four minutes,” said Russo. “They got aggressive on us in the third quarter, and we didn’t handle it. We got a little loose with the ball and lost our toughness. But our guys never give up and always fight. I’m so proud of them. I just wish our locker room was a little different.”

Team captain Pedro Rodriguez noted, “They played good defense. We didn’t execute as well, and we committed a lot of turnovers. We couldn’t make our plays off the screen and roll.”

Russo said, “I feel bad for our seniors and the finality of today. It’s always difficult.” He added that he had told the team he’s had other teams that back in January were dead in the water and that his group responded so well and gave us the opportunity to play. “We earned a home game our run was great to get here. It’s a disappointing end and only one team wins in the end, but I love these guys and I am so very proud of them.”

Monticello finished its season at 11-10. FDR improved to 8-10. Michael Mingo led the Panthers with 13 points. Pedro Rodriguez and Shawn Jordan each had seven points.