Our rivers and streams have been low until Friday night's heavy rains; the USGS website showed that the Beaverkill registered below the average flows of the mid- to high-400s all week long until a … 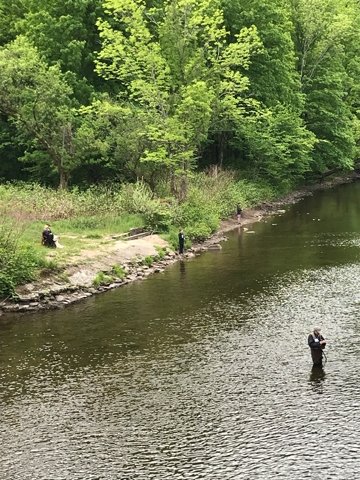 Our rivers and streams have been low until Friday night's heavy rains; the USGS website showed that the Beaverkill registered below the average flows of the mid- to high-400s all week long until a brief respite on Saturday, when the flow was recorded 477 cubic feet per second. By Sunday evening the Beaverkill, registering 323 cfs, was back below the average flow of 366 cfs and continuing to drop. The average flows are compiled from 105 years of record-keeping. Water temperatures ranged from the high-50s to almost 70 degrees last Wednesday and Friday.

It is such a special and beautiful time of year here in the Catskills…the fragrances, sights and sounds of nature fill the senses. The songs of the birds who have returned north and are now nesting make cheerful awakenings each morning, and this week we've enjoyed the sweet scents from the lavender lilacs and wild honeysuckle, whose spiky cream-colored flowers light up our Catskill landscapes. The (invasive) garlic mustard is blooming, with its clusters of tiny white blossoms, as are the bright and cheery pink and white blooms of the Dame's Rocket that many refer to as Woodland Phlox.

In following along with the signs of nature, matching up flowers with flies, the appearance of the wild garlic mustard and blooming of the trillium (the woodland dweller with its leaves of three and white or bright burgundy flowers) coincides with the appearance of the March Brown, curiously named as they do not hatch here in March, but rather at about this time of year when water temperatures reach the upper 50s. March Browns are large flies, with a hook size of #8 and #10, and very noticeable in comparison to the other flies that have been hatching lately.

These mayflies should last into mid-June. And with the wild honeysuckle and lilacs making their appearance just this past week, we should also be seeing the Grey Fox hatch. The Grey Fox is a mayfly that looks like a smaller (size #14) version of the March Brown.

Despite their name, Grey Foxes are more of a cream/light tan color, rather than grey, with light brown markings on their legs. The Grey Foxes should continue on through mid-July. Various sizes of caddis flies and Blue-Winged-Olives round out the hatches that are occurring this week.

Here is the pattern for the Grey Fox as originated by Preston Jennings.

And according to the late fly-tier Art Flick, this Grey Fox pattern tied in sizes #14 and #16, is an extremely effective fly even when the hatch is over, later in the season.

We're now in the midst of “prime time” fishing - the end of May/beginning of June, with lots of different fly hatches occurring and soon to come. Driving along the Willowemoc today we saw a family along the stream - what might have been the parents sitting on the bank, and a daughter and son fishing.

It was a welcome sight, as we don't often see youngsters out stream-fishing this time of year when the ‘catching' is prime; during late May and early June the end of the school year is chock-full with sports, plays and academics occupying most of the students' time.

Typically, it isn't until July or August when children and families have time to fish together after school is out, but by mid-summer most of the major mayfly hatches have slowed down, water levels are low and often warm, and prime stream fishing is over.

The best way to encourage an interest in fishing is when the ‘catching' is good - with conditions as they are now and for the next couple of weeks. During these unprecedented days and months of the pandemic, with families sheltered at home together, it's a perfect opportunity to get out on the rivers and streams with your children and experience the joys of fishing during prime time!