Rabbi Michele Medwin, Zoom Innovator, to step down in June

MONTICELLO - Rabbi Michele Medwin of Temple Sholom of Monticello will retire at the end of June after 17 years as spiritual leader of Sullivan County’s only Reform Jewish congregation. Always a …

Rabbi Michele Medwin, Zoom Innovator, to step down in June 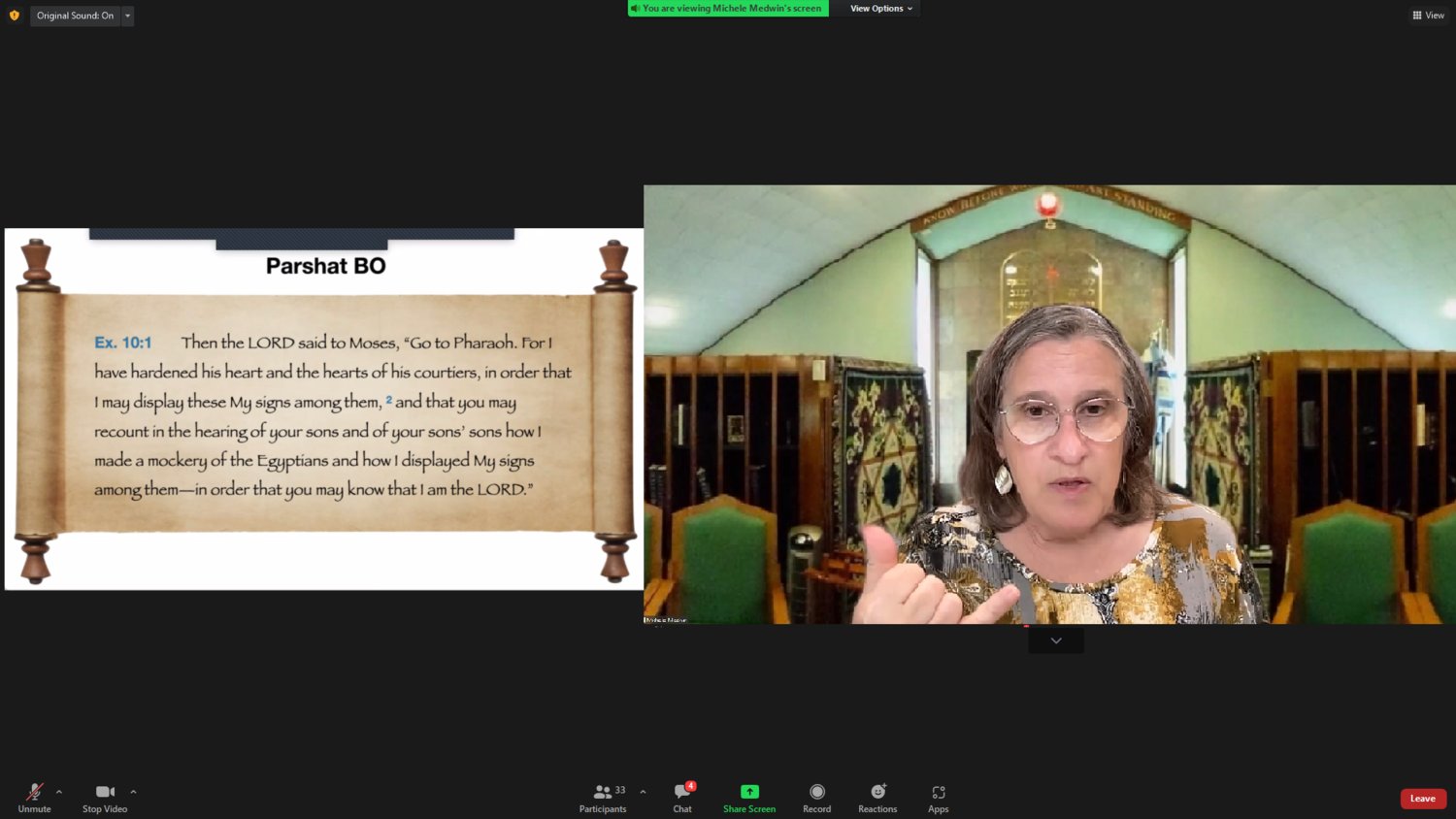 MONTICELLO - Rabbi Michele Medwin of Temple Sholom of Monticello will retire at the end of June after 17 years as spiritual leader of Sullivan County’s only Reform Jewish congregation. Always a creative spirit at the pulpit, Rabbi Medwin deployed major innovations for Shabbat services to keep her congregation active and connected during the covid epidemic. She became a master at Zoom presentations, using videos and music to put together exciting and inspiring services week after week.

Because so many congregants are snowbirds, Rabbi Medwin had already experimented with Zoom the winter before the epidemic. She recalls that Zoom was then in its infancy and was hard to use successfully.

The pandemic pushed Temple Sholom to use Zoom

As covid took hold, the congregation and the rabbi quickly agreed that people should not risk their lives by meeting in person. The many older members felt particularly vulnerable to covid and were nervous about gatherings. Because the congregation is Reform, members are not subject to the constraints against using electronic devices on the Sabbath, which have prevented Orthodox synagogues and many Conservative synagogues from turning to Zoom for Shabbat services.

The rabbi admits that it took a while for the congregation to get used to Zoom. In the “schmmoze” before services, a great deal of the chatter was along the lines of, “I can’t log on,” and “The volume is too low” and “There’s an echo” and “How do I get more of those little squares on my ipad?”

Though the rabbi uses a picture of the sanctuary as a Zoom background, she said, “it does not substitute for being in the sanctuary in front of the ark with the Torahs.” But there are some advantages. Rabbi Medwin feels that the half-hour “schmooze” before services brings the congregants closer together as they chat and share news. With labels below the pictures, attendees can learn everybody’s name. However, Medwin concedes that there is a downside -- some temple members are uncomfortable with technology, and members who don’t use email can’t get the Zoom link.

Rabbi Medwin acknowledges the help of her family in learning how to present on Zoom. Her son, Rabbi Dan Medwin, created a platform using visual images from PowerPoint or Keynote to lead prayer, which he regards as a natural evolution from prayer aids such as prayer books. Says Medwin, “My son gave me private lessons and helped me get started, but I quickly developed my own style...the transition to Zoom was relatively easy.

“Being married to an engineer and being a math and science person from an early age myself, our family has adopted new technology as it emerged. For an ordination present, my in-laws, who were also engineers, gave me a Palm Pilot. I remember how shocked some people were that a rabbi would have such a gadget, which was rare in 1997. I was able to pick up the Zoom technology fairly easily, but I also had my son and husband as consultants when I needed help.

“My husband helps during the Zoom service as co-host so I can focus on leading services. He handles the technical aspects of running Zoom. When we started to conduct hybrid services -- part in person and part on Zoom-- he was instrumental in helping to make the technically complicated transition.

When COVID seemed to lessen a bit, congregants were able to meet in person in the temple. The hybrid service allowed participation by those who were out of town or did not feel comfortable in a crowd during covid. The complicated technology includes balancing the sound in the sanctuary with the sound on Zoom, finding ways to connect those on Zoom with those in the sanctuary, and using several computers at the same time, one for me as the service leader and one for the co-host to monitor the sound, images, and muting.

Bringing videos and pictures into the service takes a great deal more preparation time than an in-person service using prayer books, according to Rabbi Medwin.“For each prayer of the service, the words have to be put on a slide. For each slide, I choose a visual that matches the theme or mood of the prayer. It also takes time to find just the right musical version of a prayer for that service and slide. I try to vary the images and music from service to service so each service is unique.

“The visuals come from several places,” says Rabbi Medwin. “Some are photos my husband or I have taken. Whenever I take a photograph, I try to imagine how it could be used on a slide in the service and where the Hebrew and English words can fit on the image. Some photos and images I get from Google. Others I find on Facebook. I also use paid photo websites if I need to find just the right photo. The music is part of my collection that I have accumulated during my 25 years as a rabbi. Sometimes I incorporate new music or videos of choral groups that colleagues share.”

Rabbi Medwin also teaches adult education classes. She observes that “teaching on Zoom works out very well. We can each see each other’s faces and hear what each other says.” On the other hand, in a brick-and-mortar classroom, “wearing masks and social distancing makes it difficult to have discussions.”

She started as an optometrist

The rabbinate is a second career for Medwin. “I had a private optometrist practice for thirteen years. Our congregation had just hired an inspiring woman rabbi, which was rare in those days. On High Holy Days when I read Torah, I felt something powerful come over me that this is what I should be doing. At my son’s bar mitzvah ceremony, my husband and I were talking with the rabbi about midlife crises. I shared with her that I would love to become a rabbi. I laughed because, with an optometry practice and a family, there was no way that could happen. She stared at me and said, ‘Well we will have to find a way to make it happen.’ The rest is history.

“My first year of rabbinical school was in Jerusalem so we could study Hebrew and learn the history of our people where it all took place. My husband took a leave of absence, and we brought our two kids, aged 10 and 14, to Israel with us for the year. We walked everywhere and experienced the wonder and excitement of living in Jerusalem together.

“My son was closer in age to my classmates than I was, and he hung out with them. They so inspired him that he also became a rabbi, and he met his wife in rabbinical school, so there are three Rabbi Medwins.”

Temple Sholom’s Medwin completed her rabbinical studies at Hebrew Union College in New York. In May she will receive an honorary Doctor of Divinity degree from that college in acknowledgement of her 25 years as a rabbi.

During those years Medwin also worked as a chaplain at a residential school for “at risk” teens. Intrigued by counseling, she decided to return to Hebrew Union College for a Doctor of Ministry degree in Clinical and Pastoral Counseling and earned her counseling license.

She is currently able to counsel part time by limiting her work as a rabbi to two very packed days a week. She says that “my counseling experience comes in handy as I help our members get through the pandemic and try to remain optimistic and feel safe.”

A rabbi’s work is never done

Rabbi Medwin prepares and leads Shabbat weekly services. She enjoys crafting a commentary on the Torah portion of the week and teaching adult education classes. Congregants often ask her to officiate at baby namings, bar and bat mitzvahs, weddings, and funerals. She says that, “Life cycle events are the most satisfying moments as a rabbi. I am there with people at their most joyous moments and with them at the most vulnerable times in their lives -- severe illness, loss, and death. No other profession enables you to touch people in such a way.”

For medical reasons, Medwin plans to retire on June 30. She generously will offer her “ready-made” Zoom segments for use by whoever fills her position, though she cautions that all her work was done on a Mac, so compatibility could be an issue.