LAKE HUNTINGTON- You can hear the rumble and it’s getting louder. It’s the sound of thunder auguring an approaching storm. Minute by minute it’s getting closer and becoming harder … 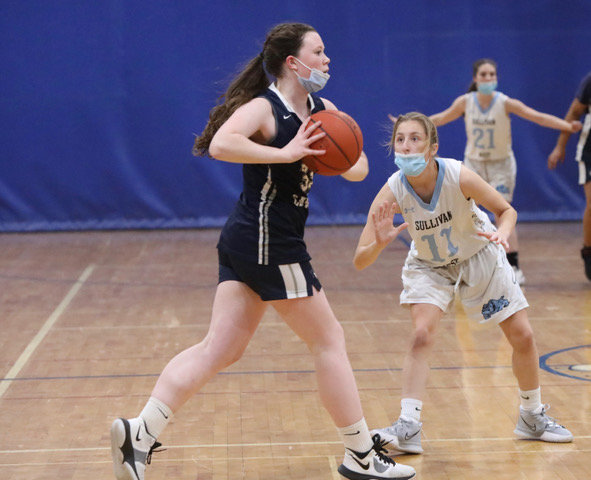 Tight defense by Sullivan West’s Kaylee DiBiase keeps Burke’s Angie Jamison in search of someone to pass to.
Richard A. Ross | Democrat 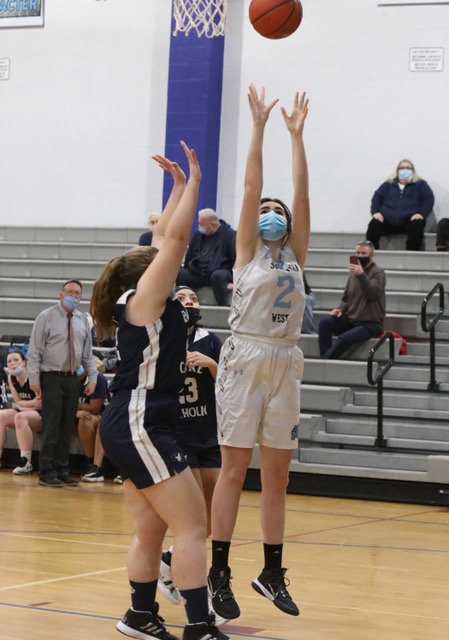 Power in the paint: Sullivan West senior Taylor Wall fires one in for two of her game-high 22 points in the win over Burke.
Richard A. Ross | Democrat
Previous Next
Posted Friday, December 17, 2021 1:00 pm
Richard A. Ross

LAKE HUNTINGTON- You can hear the rumble and it’s getting louder. It’s the sound of thunder auguring an approaching storm. Minute by minute it’s getting closer and becoming harder to ignore. What you are hearing is not the preamble to a downpour, it’s the unmistakable sound of Sullivan West’s gathering intensity as they continue to impress with an undefeated start to the young season. After a captivating league road win over nemesis S.S. Seward, a game in which the Lady Westies evinced their brand of aggressive, cohesive basketball, they returned home to thrash John S. Burke Catholic 64-33.

With impressive play inside from bigs Taylor Wall, Felicity Bauernfiend as well as the relentless play of Riley Ernst, the Lady Bulldogs are cleaning the glass on both ends of the floor and putting up second and third chance shots, while their guards led by the deft floor vision of Brielle Arnott and Grace Boyd are distributing the ball down low or firing from open space to marshal Sullivan West’s dominance in the paint. Add in some stunning beyond the arc shooting and there you have it, a gathering storm that has the potential to sweep through the coming competition

Burke has had its difficulties thus far falling to 0-5 with losses against Marlboro, Valley Central, Chester, Red Hook and now Sullivan West. For the experienced and savvy of Coach Matt McGinnis, it’s a process of re-energizing the Lady Eagles following the graduation of the Costello triplets who brought their own brand of thunder to the changing weather of girls basketball. They are at Kings College now and the young team is working hard to gain some traction. Taylor Wall led all scorers with 22 points, Riley Ernst and Brielle Arnot added nine apiece and Mia Nunnari and Grace Boyd contributed eight each.

Sullivan West led 16-7 after the first quarter and 29-15 at the half. Their defense held Burke to just 18 points in the second half.

Coach Pat Donovan summed up the recent success, “Last night we found each other well. We passed very well and were patient offensively. We took the shots we were given from the defense. Grace seemed to come into her own last night. She saw the floor very well. Taylor Wall played well in the second half with 17 points. She rebounded well and was able to finish around the basket. We were able to throw the ball over the top of their defense to get her and Riley the ball down low. Everyone contributed in the victory. That was a great team win for us and a big division win for us. We have some tough games coming up with Chester [last night] and O’Neill after break.”