LIVINGSTON MANOR – The Blue Devils are back on the diamond with their first varsity baseball team in over a decade. They had their first game of the season on Tuesday afternoon, squaring off … 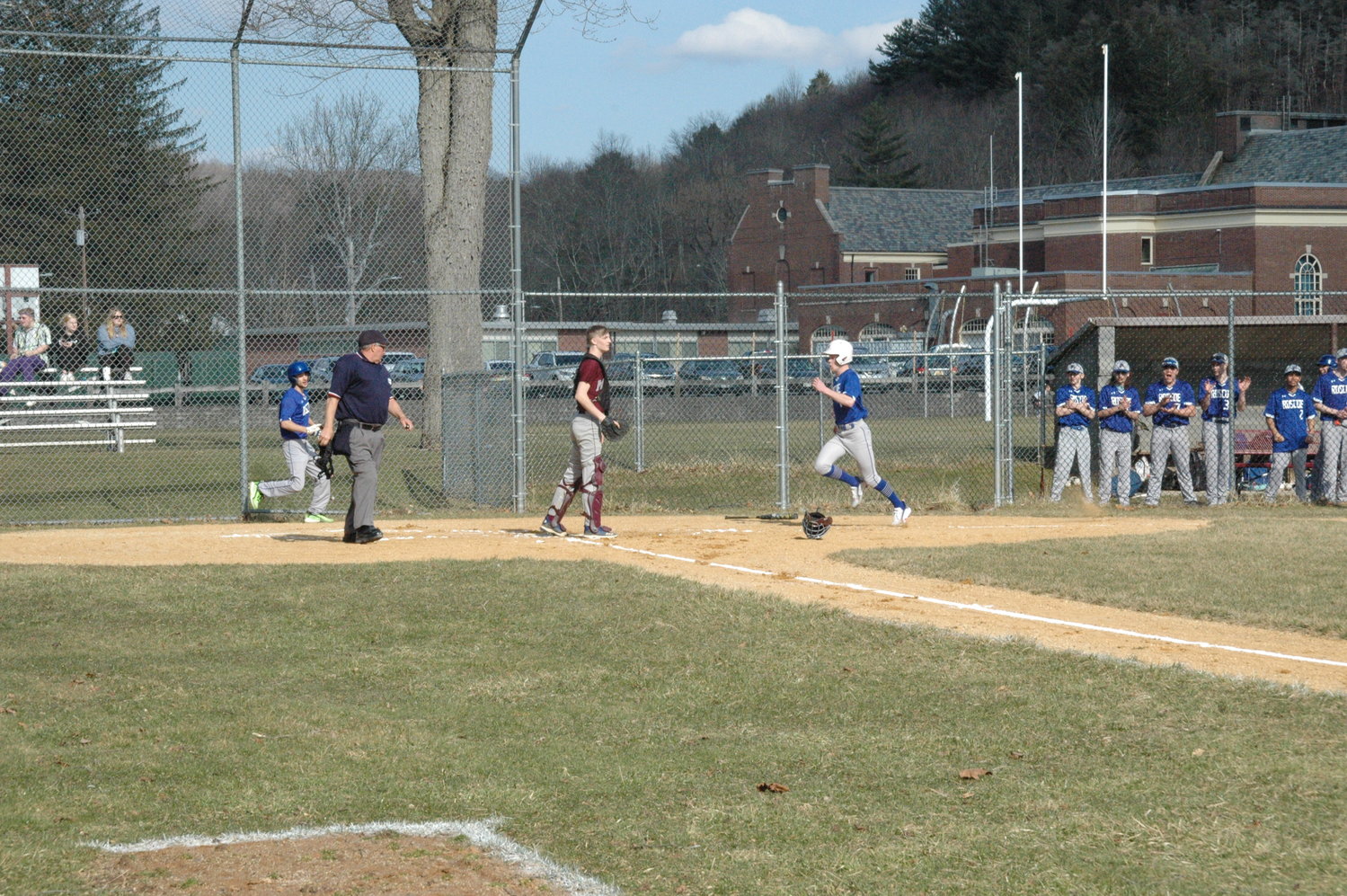 Aiden Johnston speeds into home for the score on a single by Anthony Teipelke. Jack Madera, who scored ahead of Johnston was there to meet him and celebrate the early 2-0 lead.
Anthony Morgano | Democrat 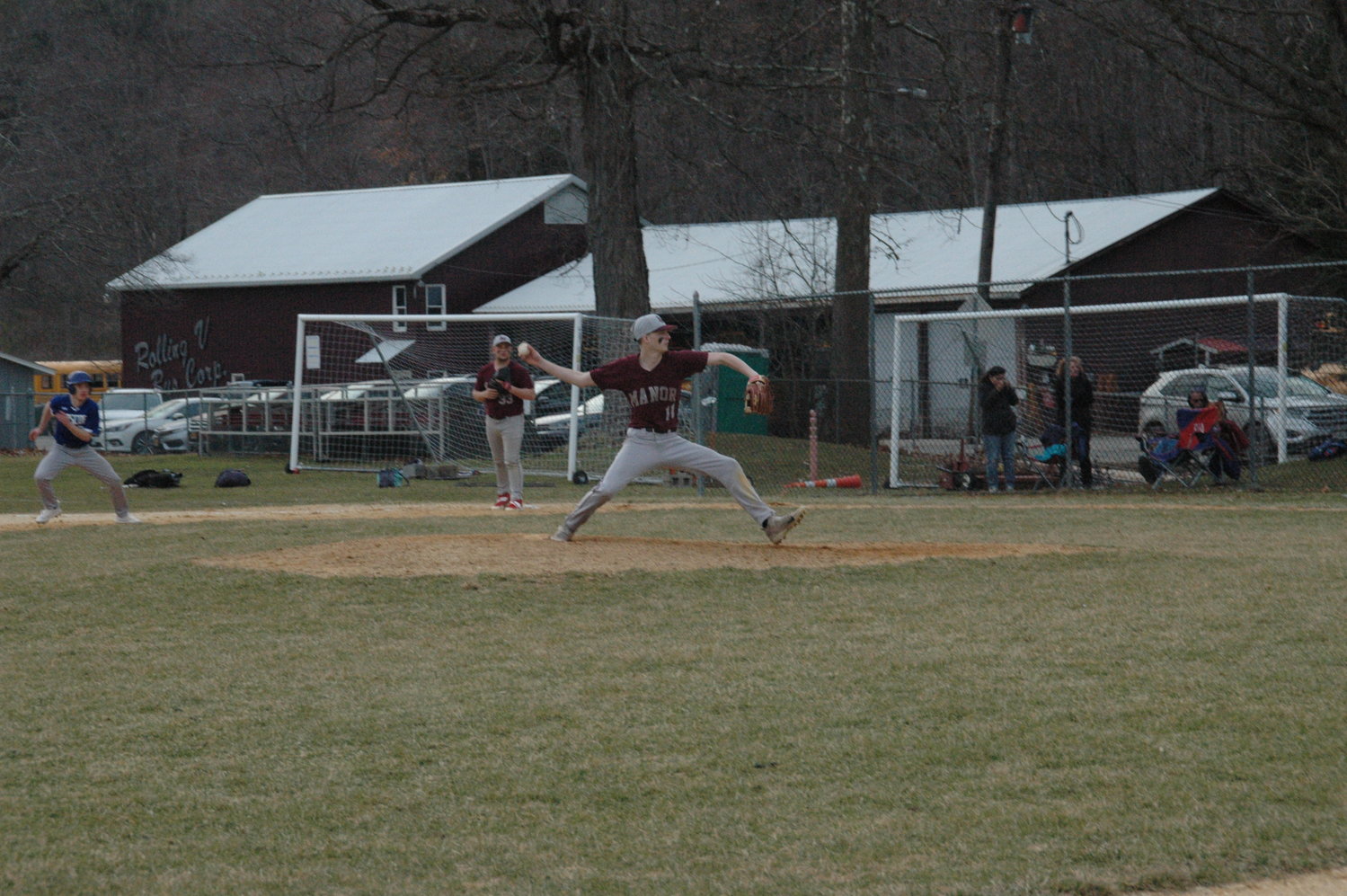 Matthew Bowers picked up the win for the Wildcats after his team walked it off in the bottom of the sixth.
Anthony Morgano | Democrat
Previous Next
Posted Friday, April 8, 2022 6:20 am
Anthony Morgano

LIVINGSTON MANOR – The Blue Devils are back on the diamond with their first varsity baseball team in over a decade. They had their first game of the season on Tuesday afternoon, squaring off against Livingston Manor in a division matchup. The two teams battled throughout the afternoon, but home field advantage came into play at the end as Livingston Manor was able to retake the lead and get the 13-11 win.

“It’s nice to have a team here,” Roscoe Coach Corey Booth said in an interview prior to the season opener. “The kids are excited and they’re looking forward to playing this season.”

The game started just before 4:30, and was called in the bottom of the 6th due to the rapidly setting sun. The lead changed hands multiple times in the game, but Roscoe’s 11-8 lead going into the bottom of the 6th inning would quickly be erased by disciplined at-bats, aggressive baserunning and timely hits for the Wildcats. After the Wildcats tied the game, a 2-run single by Bobby Staudt gave them the lead before the game was called.

For the first game of the season, both teams played considerably well. Hitting the ball, throwing strikes, and making plays on both sides of the ball made the game interesting. On the other side of that same coin, missed signs on the bases, costly errors, and walks are something that both teams still need to work on as well. Good and bad takeaways can be expected early in the season, and both coaches shared a similar sentiment of seeing a few things in the game that they would like to fix going forward.

The pitchers for both teams seemed to have the hardest time, with the Blue Devils quickly scoring twice in the first frame and the Wildcats answering with three runs of their own in the bottom of the first.

The Blue Devils scored two more in the top of the fourth to make it 8-7, and Anthony Zamenick came in to relieve starting pitcher Aiden Johnston. Livingston Manor had runners on 2nd and 3rd, but Zamenick earned a strikeout looking to end the fourth and hold the lead.

The Blue Devils added two more in the fifth inning with some timely 2-out hitting. The Wildcats cut the lead down to two in the bottom of the 5th, as the sun was beginning to set.

In the sixth, Roscoe added an insurance run, taking an 11-8 lead into what would be the final frame. Livingston Manor loaded the bases quickly drawing three straight walks. They began chipping away at the lead, tying it briefly at 11 before Bobby Staudt drove in 2 runs in the final at-bat of the game.

Staudt and the Wildcats celebrated as soon as he hit first base, but the umpires and coaches came together to discuss potentially continuing the game as there was still an inning and a half to play. Ultimately, the two teams decided to call the game and Livingston Manor got the win in front of their home crowd.

For the Blue Devils, after not having a team for so long, they kept pace with the Wildcats, and the division looks to be a competitive one this season.

The two teams combined to draw 32 walks, while the pitchers for both sides amassed 19 strikeouts in the game. Joseph Gould, batting leadoff for the Wildcats reached base in each of his five at bats, and every player on both teams reached base at least once in the contest.

“It was a back and forth game,” Booth said. “We hit and played well for our first real time on a field.”

“It’s nice to get a win in the first game, especially when it’s a league game,” Livingston Manor Coach Adam Larson said following the game. “It’s nice to see Roscoe uniforms on the diamond again.”