WAPPINGERS FALLS – With each successive victory by T-V senior Adam Furman, coupled with the steady ascension of the boys team’s placing, it becomes more and more challenging to find the … 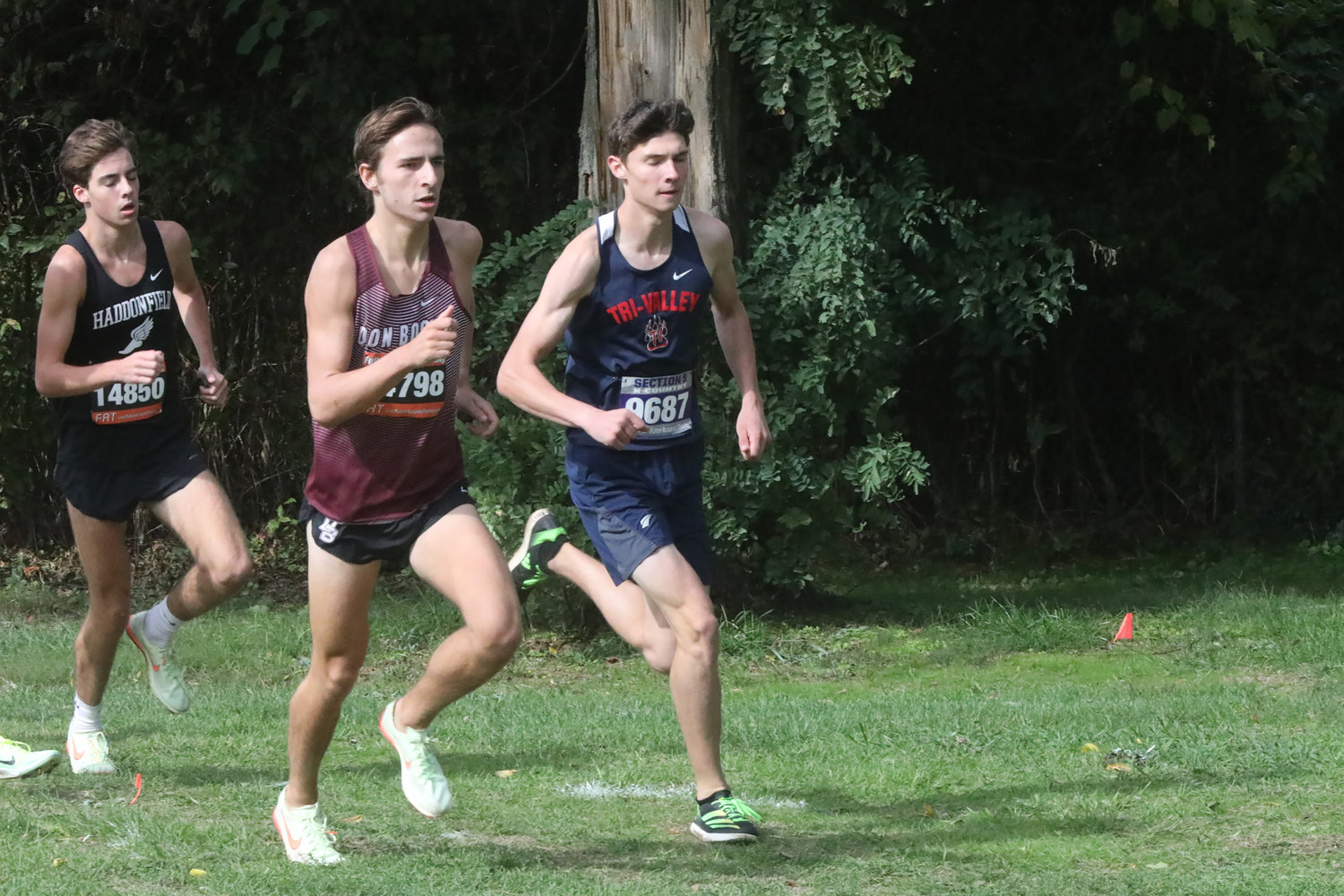 Tri-Valley’s Adam Furman leads Paul McGuire of Don Bosco Prep and George Andrus of Haddonfield Memorial H.S. in the early going. Furman went on to edge Andrus in a photo finish to capture his third Invitational title this fall.
Richard A. Ross | Democrat

Adam Furman proudly wears his medal for winning the Varsity 1 race. He will add it to his extensive medal collection.
Richard A. Ross | Democrat 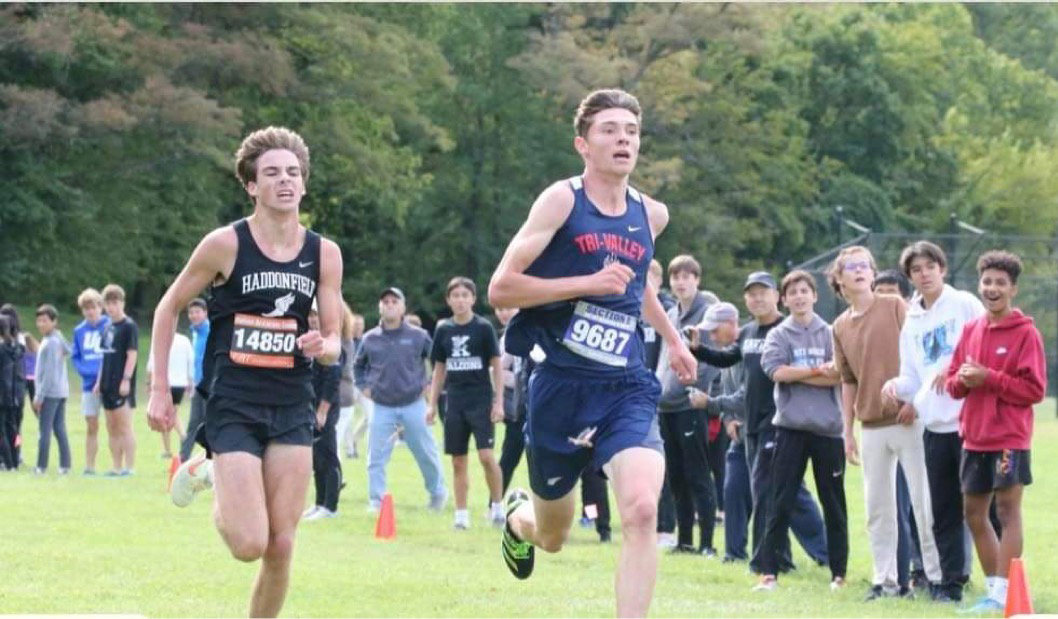 WAPPINGERS FALLS – With each successive victory by T-V senior Adam Furman, coupled with the steady ascension of the boys team’s placing, it becomes more and more challenging to find the superlatives to proclaim their achievements. At the annual Bowdoin Classic featuring hundreds of runners from New York, New Jersey and Connecticut, Furman won the Varsity Boys 1 Race topping all comers from the field by besting George Andrus from Haddonfield Memorial High School in New Jersey by six tenths of a second.

“When we started there was one runner who went out ahead, but we (Furman and Andrus) caught up with him at about a mile and a half. I knew what I wanted to do.”

From there on to the photo finish, Furman held the lead and used a powerful final kick to hold off Andrus to capture his third first place finish in big invitationals this fall including the Pre-State at Vernon Verona Sherill and then the Suffern Invitational.

Furman noted, “Nearing the finish line I could see his (Andrus’) shadow and I gave it the final surge.” It should be noted that these races feature runners from all classes. Tri-Valley is ranked first in the state in Class D as is Furman individually. This race was a preamble to the Federation Race which takes place after states. It is a race the Bears attend each year and to a man their times were faster than a year ago. Furman won the race in a blistering 16:02.3 though he was quick to note that as the season progresses and the pre-state training becomes more intense, he plans on breaking 16 minutes by the time he is running the Bowdoin Park course at regionals. Last year Furman’s fastest time in the season was 16:11. The Tri-Valley team finished fifth overall, the top NYS team in the race.

The teams ahead of them were from other states. Adam and Van Furman recorded personal records for the season (PR’s) as did Vincent Mingo. “We’re a stronger team this year. All of our top runners have moved up,” noted coach Chip Furman.

This week the Bears are gearing up for their weekend where they will compete in the iconic Great American X-C Festival Race in Cary, North Carolina. The following week the Bears will be at the Manhattan Invitational at Van Cortlandt Park as the season hurtles on towards the OCIAA, Sectionals, Federation, Footlocker Northeast Regional and the possibly nationals. The Varsity 2 race had its share of top performers too. When the results of the two races in the Bowdoin Classic were merged, Adam was third behind Jimmy Wischusen of St. Union Catholic (15:54.20) and Nicholas Sullivan from Christian Brothers Academy (16:00.70). He would have liked to run against them but the race was organized to divide powerful runners evenly.

The T-V girls were not in full strength as both Anna Furman and Brynn Poley were recovering from illness this past week. Amelia Mickelson who has been battling pain in her shins is awaiting an MRI to determine if she has shin splints, a stress fracture or anything else that is causing her pain. She ran this race with moderation and to also inspire her teammates.