One day recently I was doing some family research on https://nyshistoricnewspapers.org/ when an item from the August 20, 1925, edition of Sullivan County Record caught my eye. 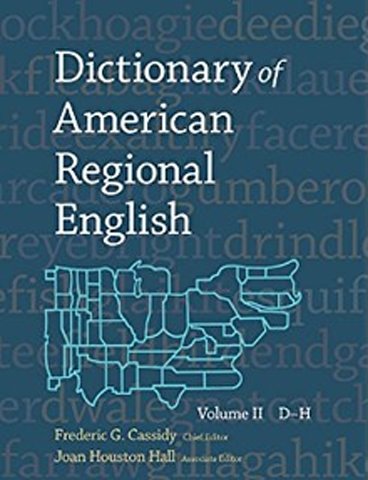 One day recently I was doing some family research on https://nyshistoricnewspapers.org/ when an item from the August 20, 1925, edition of Sullivan County Record caught my eye.

“Our ‘newlyweds,' Mr. and Mrs. Fred Stabbert and Mr. and Mrs. Chas. G. Curtis, were treated to an old-fashioned skimmelton last Friday evening.”

A skimmelton, you say? What would such a thing be? For my research I took an even deeper dive into the interwebs and discovered DARE: Dictionary of American Regional English.

This wonderful resource is a record of the spoken English of America from its inception up to the present. It was created by Jamaican linguist and lexicographer Frederic Gomes Cassidy and his researchers who looked into written records and surveyed nearly 3,000 people across the country.

They assembled their findings and included maps to show where the words were found. The maps reflect population, so they look odd, but they are easy to read. DARE was originally released in six volumes but was put online in 2013, where for a slight fee, you have access to it all.

I found “skimmelton” under the entries for Courtship, Wedding and Childbearing. Question AA18 read as follows:“What do you call a noisy neighborhood celebration after a wedding, where the married couple is expected to give a treat?”

The answer for our region was “skimmelton” or “skimmington.” It's also known as a “shivaree” in the Midwest, as you might remember from the musical “Oklahoma!”

I went back to nyshistoricnewspapers.org to find out more about skimmingtons or skimmeltons in our area. My richest source was the Sullivan County Record, a newspaper printed in Jeffersonville from 1873 till about 1970. The Record was chock full of these celebrations, called by either name, from 1884 through the mid-1950's.

Skimmelton was found in 77 entries in the Record from 1884 through the early 1950's. Skimmington was found 111 times from 1879 through July 30, 1953, when it was reported that “the friends and neighbors of Mr. and Mrs. Alan Sommer assembled to give them a skimmington last Saturday night.”

I also interviewed a primary source--my Aunt Anne Stabbert Robisch Foland, daughter of the aforementioned Mr. and Mrs. Fred Stabbert. Aunt Anne, who celebrated her 94th birthday in July, told me that she and her husband Perk had been the recipients of a skimmelton after their marriage. She had also participated in many skimmeltons in and around Callicoon and was a fount of knowledge on this long-lost tradition.

Anne said that in a good skimmelton, the friends of a newly married couple surprise them by gathering outside their house after dark and banging on pots and pans to make as much noise as possible. The couple then comes out and invites the revelers in for refreshments.

If you were a lucky newlywed, you might have a friend tip you off ahead of time, so you had some time to prepare some food and drink.

Some skimmeltons were epic. The Record reported that in Lake Huntington in January 1946, “Robert, son of Mr. and Mrs. Charles Waldron, and Miss Catherine Tumminia of Brooklyn were married Jan. 5. They went on a honeymoon trip to the South and returned to the groom's parents' home and will make their home here. They were given a skimmelton Wednesday night and it surpassed all others of its kind. Three sticks of dynamite were set off besides all the other noise. The party then went to the Nutshell Hotel, where refreshments and dancing were kept up till an early hour in the morning. Over 100 attended.”

A skimmelton for the ages.