SPACKENKILL –– The Blue Devils, a family comprised of students from Roscoe, Livingston Manor, and Downsville, looked to build off their success from last season, and earn another trip to … 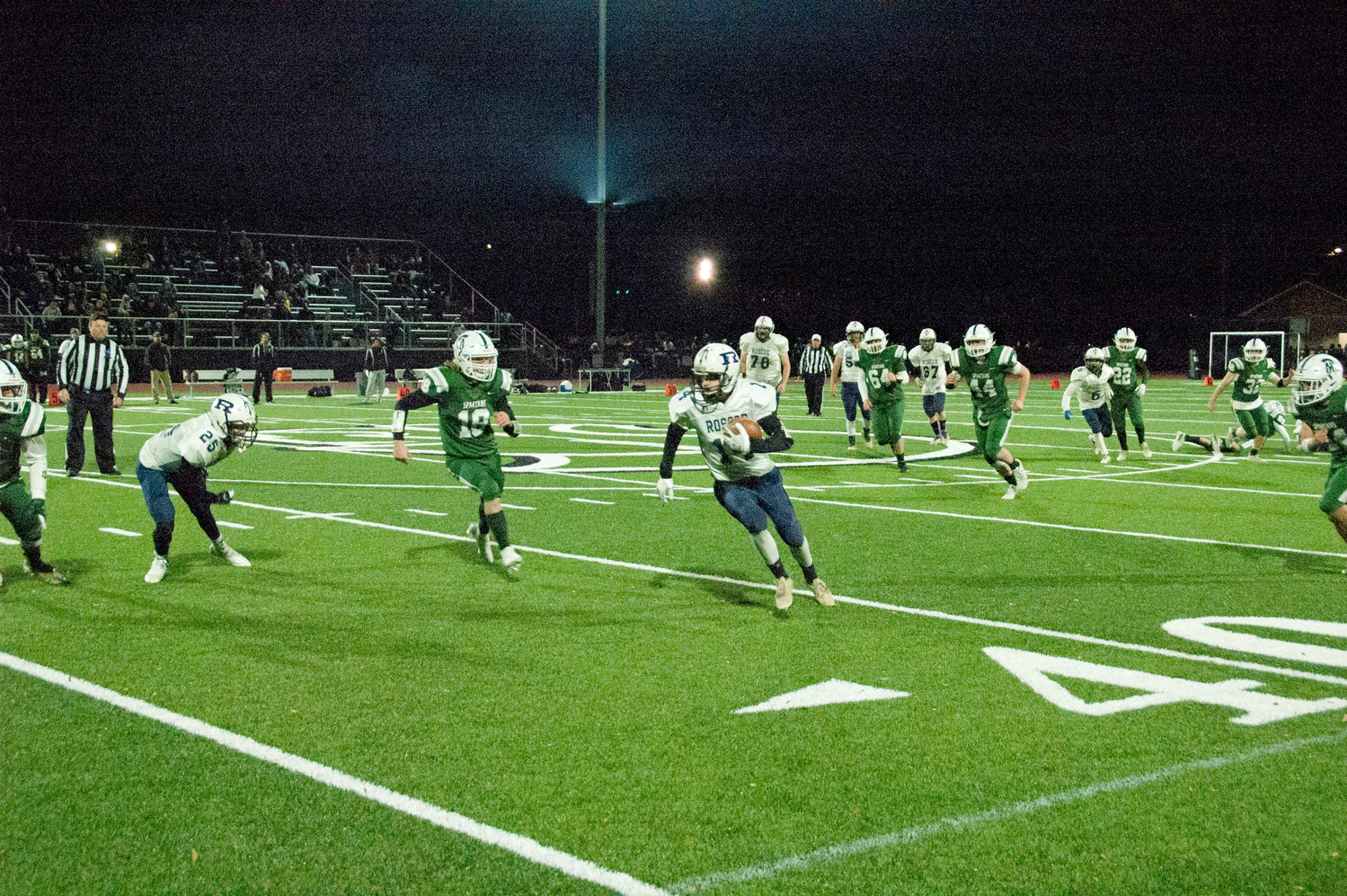 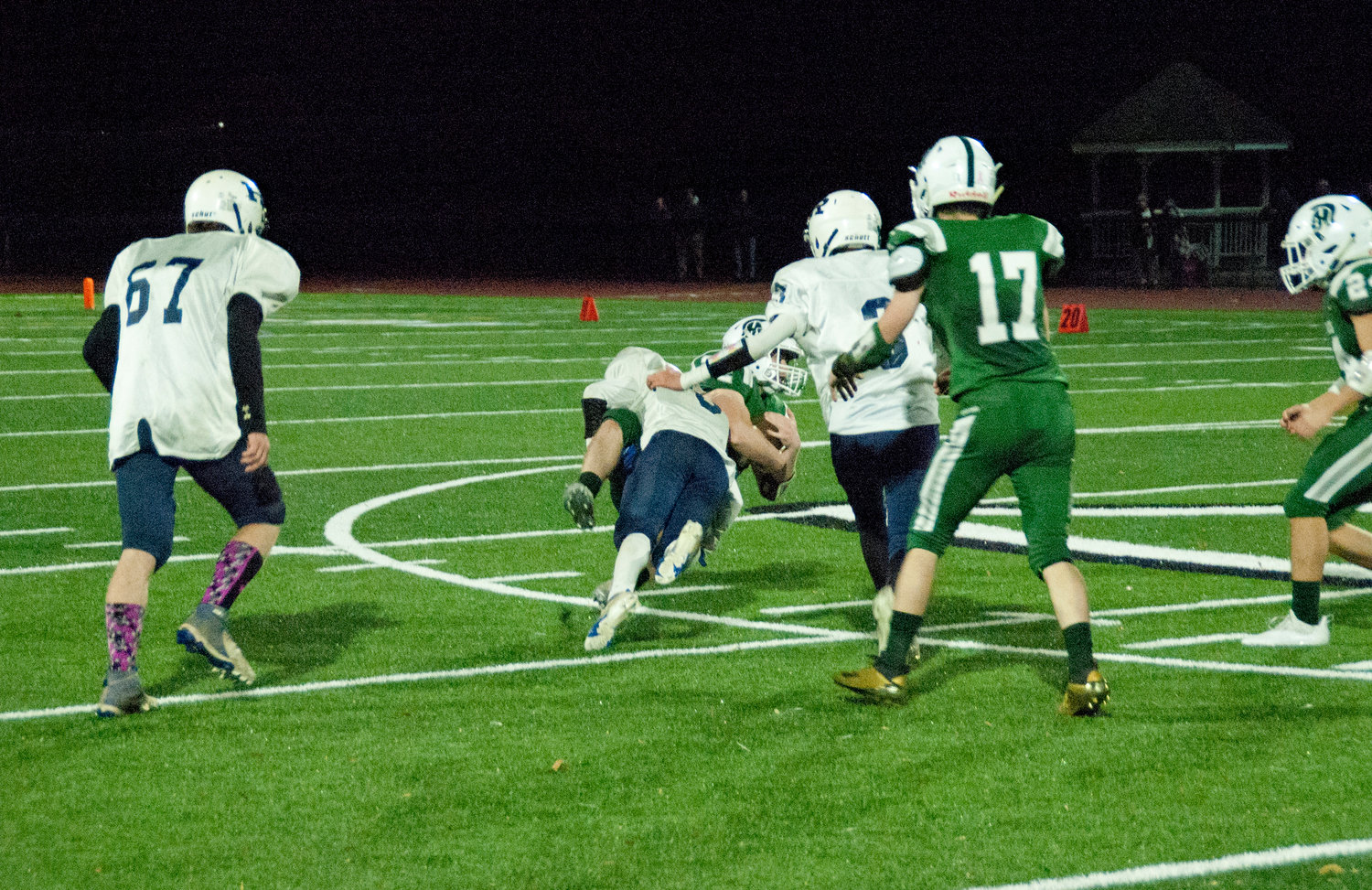 Alaniz Ruiz plants a Spackenkill running back to the turf with a textbook form tackle. Ruiz made his presence known on both sides of the ball all season long.
Anthony Morgano | Democrat 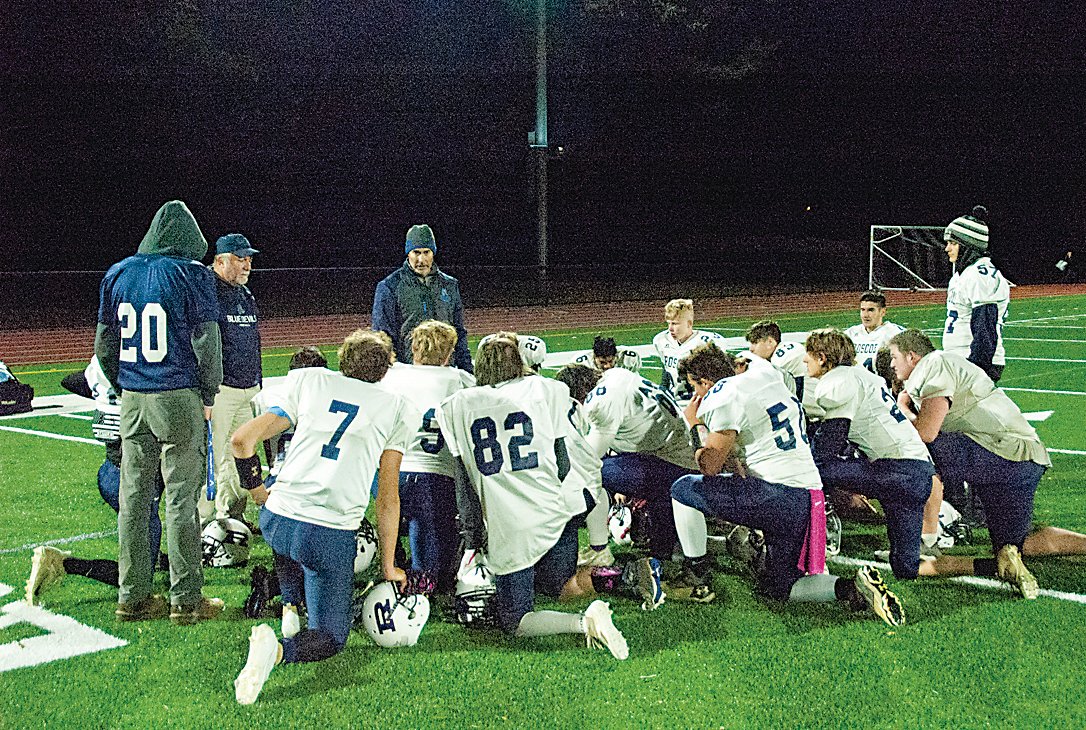 Although the outcome is not what they wanted, the Blue Devils have a lot to be proud of as they head into the offseason. Coach Mike Hill addresses his unit after their battle with Spackenkill.
Anthony Morgano | Democrat
Previous Next
Posted Tuesday, November 9, 2021 6:40 am
Anthony Morgano

SPACKENKILL –– The Blue Devils, a family comprised of students from Roscoe, Livingston Manor, and Downsville, looked to build off their success from last season, and earn another trip to the Section IX Championship game. Unfortunately for them, the Spackenkill Spartans got in the way, defeating them in the semifinal game by a score of 38-24.

The Blue Devils earned their place in the semifinal by going 4-1 in the league and defeating Pine Plains in the first round of the playoffs. Spackenkill, who had not lost a game since the first week of the season, had earned a top seed, giving them home field advantage for the semifinal clash.

The Blue Devils received the opening kickoff, and the match was underway. Early in the game there was a battle for field position. Roscoe and Spackenkill both had defenses that refused to yield any positive yards, but while Roscoe was able to earn a first down on each of their first two possessions, Spackenkill could not, and were driven deeper and deeper into their own territory.

The Blue Devils defense struck the first blow of the game, as Lakota DeWitt stripped the ball from the Spartans’ running back and ran it 20 yards for the score. The two point conversion run would fail, as it would with each of Roscoe’s other three touchdowns. Spackenkill found their offensive stride on the next possession, methodically moving up the field using precision passing. After a long completion set Spackenkill up inside the 20, quarterback Anthony Hoyt found Daniel Collins for a 9-yard touchdown.

Following the touchdown, Roscoe quickly moved the ball back into Spackenkill territory. After a few first downs, the Blue Devils were inside the five yard line with a first and goal. After losing two yards on first and second down, the Blue Devils set up for a third and goal at the 4 yard line when disaster struck. A triple option read play was blown up in the backfield, and a Spackenkill defender intercepted a sweep intended for Ruiz and took it 91 yards across the field for a score. The Spartans converted and suddenly the score was 16-6 in favor of the home team.

On their following drive, the Blue Devils fumbled and gave the ball back to the Spartans, before a defensive stand to get the ball back. Roscoe began advancing the ball but ran out of time, and the score stood at 16-6 at the break.

For the second game in a row, special teams came up big for the Blue Devils as they forced Spackenkill to punt early in the third quarter and Ruiz returned the ball down to the Spartans 5-yard line. After three unsuccessful plays, Anthony Zamenick found Ruiz on a slant for the touchdown on 4th and goal to make it a one-score game with 8:27 left in the third quarter. Spackenkill found the endzone on their next drive, but failed the conversion to make the score 22-12.

Zamenick found Gould for a 49-yard touchdown pass and suddenly the score was 22-18 with 4:50 still to play in the third.

As time wound down in the third quarter, the Spartans struck again, a 34-yard touchdown pass and a two-point conversion made the score 30-18 at the end of the third quarter. Roscoe punted to Spackenkill, and a huge defensive stand kept the Spartans deep in their own territory. The Blue Devils blocked the punt and started their drive just shy of the Spackenkill goal line, where Ruiz barreled into the endzone to make it 30-24.

Spackenkill scored one final time in the game, a 5-yard touchdown pass from Hoyt with just under four minutes remaining in the game. The Blue Devils, with their backs against the wall, were unable to overcome the 14 point deficit and ultimately lost the game 38-24.

Both teams gave strong, playoff caliber performances and delivered a great show for the fans. Coach Mike Hill had nothing but praise for the way his team battled all night. “It was a great game,” Hill said. “Both teams got a few breaks, and the boys worked hard. They have a lot to be proud of.”

“We were right in it until the end,” Hill continued. “This team showed discipline, teamwork and I was happy to be a part of it.”

The loss marks the end of the season for the Blue Devils, and as the students go their separate ways, they will be sure to meet on opposing teams with the winter sports seasons rapidly approaching.