SPACKENKILL - The things in this life that are of the greatest value have nothing to do with money or possessions. Those things we come to value the most are our relationships with others, how we … 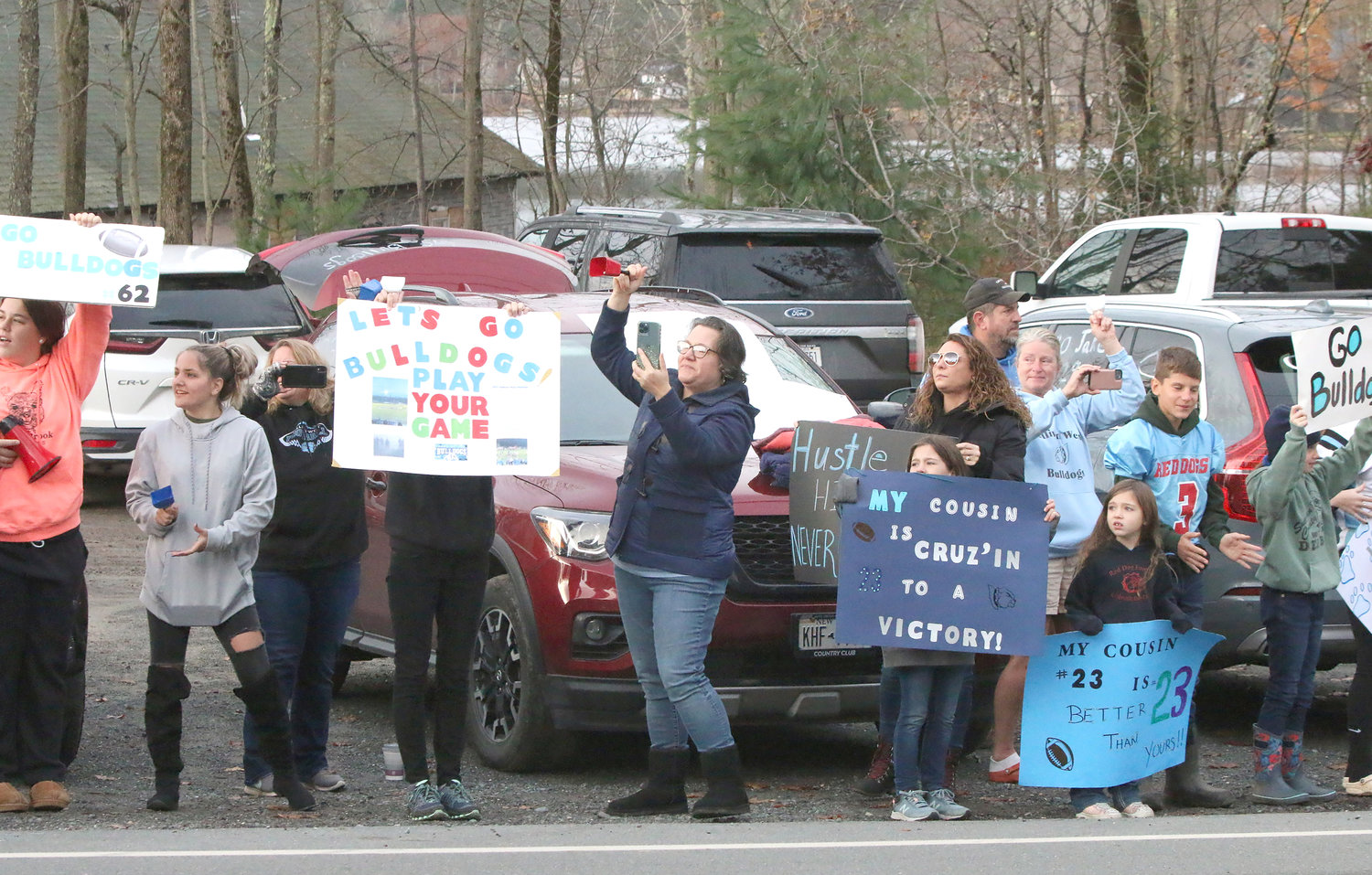 Sullivan West fans line Route 52 on Saturday morning for a vibrant sendoff to the team. The team bus was preceded by fire trucks, an ambulance and pickup trucks. Later at the stadium, the stands were packed with avid Bulldog fans.
Richard A. Ross | Democrat 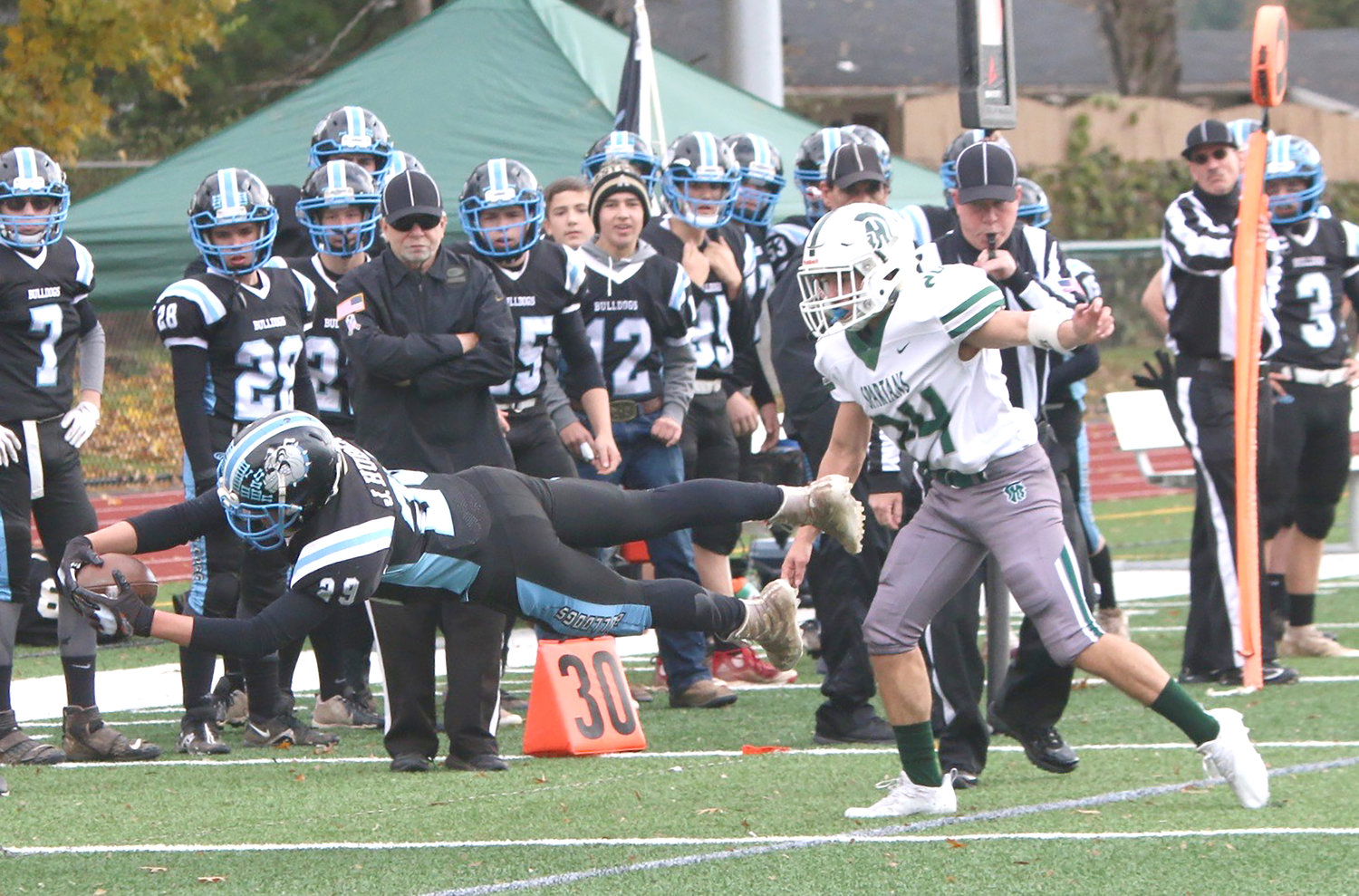 Sophomore Jacob Hubert makes a great diving catch on a pass from quarterback Gavin Hauschild early in the game. The Bulldogs' initial progress was hampered by an injury to lineman Dillian Hanslmaier who would return, but not quite himself.
Richard A. Ross | Democrat 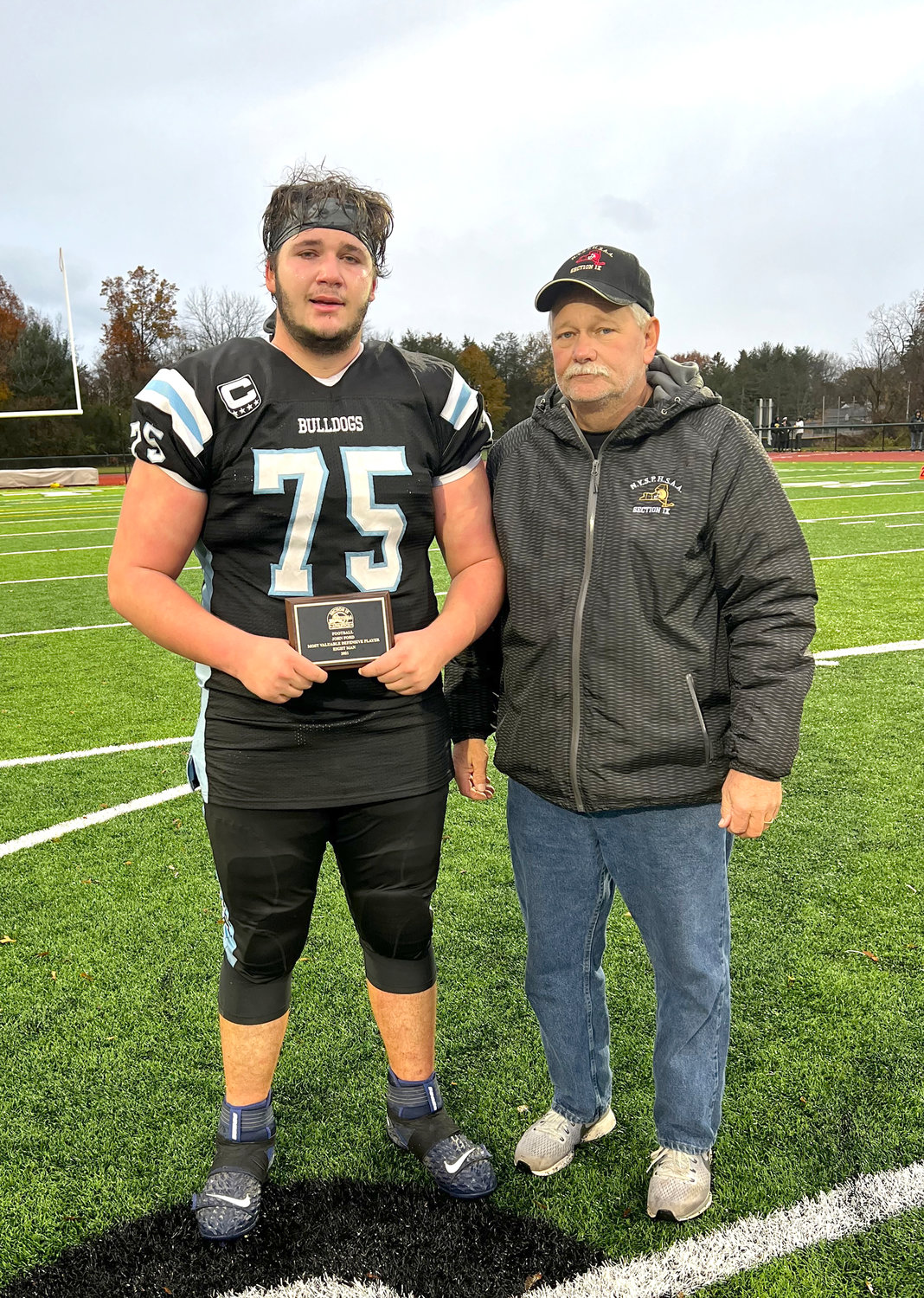 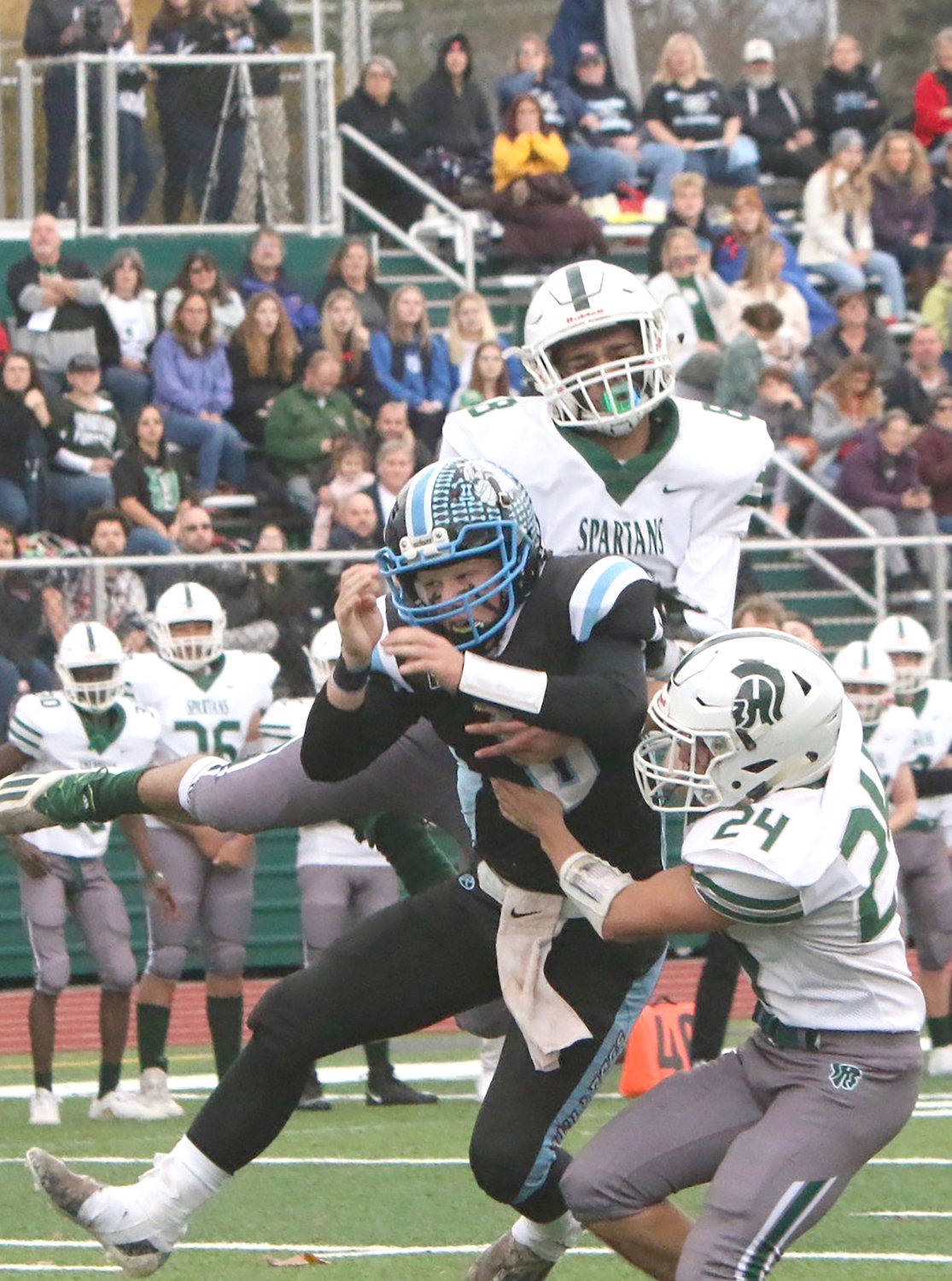 SW quarterback Gavin Hauschild goes up for a pass from Justin Grund and is sandwiched between Spackenkill's Antonio Lopez and Seven Ciancio. He badly twisted his knee and had to exit the game near the end of the second quarter.
Richard A. Ross | Democrat
Previous Next
Posted Tuesday, November 16, 2021 6:20 am
Richard A. Ross

SPACKENKILL - The things in this life that are of the greatest value have nothing to do with money or possessions. Those things we come to value the most are our relationships with others, how we contribute by dint of our efforts and ultimately, what we accomplish, even in the face of adversity and challenges.

But when it comes to how we regard the experiences in our lives, be they positive or negative, it's all about perspective.

For the Sullivan West Bulldogs football team, following Saturday’s heart-rending 54-12 eight-man championship title game defeat to the host Spackenkill Spartans, the immediate sense of disappointment and dismay seemed overwhelmingly pre-eminent. Their hopes for aspired glory crushed by the sting of defeat, the outstanding achievements of the season leading up to this day, seemed momentarily forgotten on the tearful and distraught faces of the young men who had come so far. As the team gathered in the corner of the end zone, their coaches spoke to them with words of praise and offered them a different perspective on how to view what they had accomplished over the course of the season.

Coach Ron Bauer expressed his feelings of pride in the team's 6-2 campaign. "You did a great job. We were missing players today due to quarantine and certainly the injuries we suffered were a big factor." He was referencing the first series injury to junior lineman Dillian Hanslmaeir who did return to the fray, albeit hampered, and the crucial loss of quarterback Gavin Hauschild to a knee injury late in the second quarter when the game was still winnable. "Honestly, I didn't think we would get this far," he told them, referring to his pre-season foresight, "but you worked hard during practices and games and you got all the way to this title game. You have nothing to be ashamed of."

Bauer noted that playing football is not something a lot of kids can do. He referenced the words of his Delaware Valley High School football coach Jim Brown: "Football teaches you that when you get knocked down, you get back up."

Bauer pointed out that life will bring its share of adversity and the experience of playing football builds the strength to cope with whatever comes along. He stressed the need to work harder in the off-season to get stronger and better. "We'll be back," he noted, a sentiment echoed by his staff.

Assistant Coach John Hauschild was clearly emotional as he spoke to "his family." After all, Hauschild mentored a number of the players ever since their Red Dog football days ten years ago. He told them to hold their heads up high and that they had made him proud. Assistant Coach Justin Diehl spoke about the role the seniors had played in helping to rebuild a football program that was sorely struggling. He noted that he has never coached a team quite like this one. Coaches stressed that in the course of the players' lives, it will be the successes and the friendships that they will long remember.

Sullivan West had defeated Spackenkill 26-22 in the season opener. Clearly, both teams had progressed significantly since then, each suffering only one defeat, and each triumphing over defending champion Pawling. But the Spartans, playing on their home field, seemed extremely well-prepared, particularly to launch an effusive air attack orchestrated by senior quarterback and eventual offensive MVP Anthony Hoyt. Sullivan West had not seen much passing, due to their relentless pressure on quarterbacks as well as other teams' reliance on the run. But being short-handed on the line, missing junior Rodney Wilson and without the healthy services of Hanslmaier, the Westies did not get the pass rush they had evinced a week ago against Pawling's talented Will McCarthy. Spartan receivers regularly outran the SW secondary to catch Hoyt's deft passes. Though the teams held each other scoreless in the first quarter, Spackenkill got out to a 20-0 lead in the second quarter via two TD passes followed by a Hauschild interception that was returned by junior defensive back Steven Ciancio for the last of those first half scores. Minutes later, Hauschild went out for a pass from Justin Grund in an attempt to try something different and was sandwiched between two defenders, badly twisting his knee and causing his exit from the game. Junior Jaymes Buddenhagen found senior Tarrell Spencer with a 24-yard TD pass before the end of the half to bring the deficit back down to two scores and regender hope for a change of momentum.

A lightning delay and pouring rain caused a stoppage of play as the second half was slated to start. But instead of getting a needed stop on Spack's first series, the Dawgs were burned as Hoyt dashed off an 83-yard TD jaunt to make it 26-6. The Westies answered back with a 35-yard TD pass to sophomore Rally Cruz but that was as close as they got at 26-12. Spack scored the next 28 points to garner the win. Senior Chris Campanelli was named the Defensive MVP, seemingly little consolation for the team's most dominant player. Campanelli will continue his impactful playing at Alderson Broaddus University in West Virginia via a free-ride scholarship and a starting position for the Battlers.

For Campanelli, and the rest of the seniors including Justin Grund, Gavin Hauschild, Michael Roth, Ryan Joyce-Turner, Tarrell Spencer and James McElroy, the enduring memories will include the opening night win over the Spartans, the upbeat victories over Tri-Valley, Roscoe and Pawling and the inimitable comeback vs. Ellenvile. These, along with the unfaltering love and support of the community that came out to cheer them on right to the end with a great sendoff and a packed house of fans who drove close to two hours to see their beloved Dawgs, will supplant the bitter disappointment of not quite reaching the zenith.

These avid fans appreciated the fine efforts made by these boys, what they did, what they learned and who they will become as a result of this memorable season.

When all is said and done, this season produced something of value; something fine and something that will long endure.