NARROWSBURG –– The grand opening for Bar Veloce, a cheese-and-wine eatery in Narrowsburg, remains unscheduled. Delays have left many in the community asking what happened? 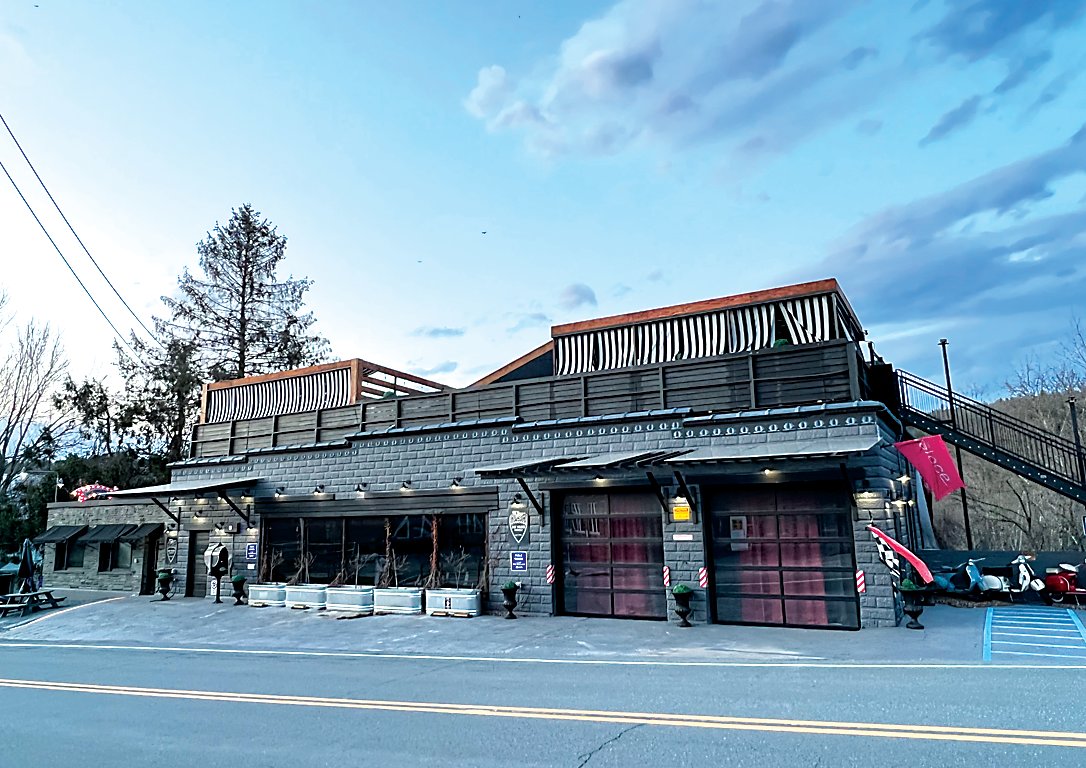 Bar Veloce at 174 Bridge Street in Narrowsburg has remained closed to the public.
Derek Kirk | Democrat
Posted Tuesday, May 10, 2022 6:54 am
By Derek Kirk

NARROWSBURG –– The grand opening for Bar Veloce, a cheese-and-wine eatery in Narrowsburg, remains unscheduled. Delays have left many in the community asking what happened?

Motor vehicle-themed eatery Bar Veloce is presently located atop Narrowsburg Motor Sales, Inc. at 174 Bridge Street. Prior to 2020, the longstanding car dealership and garage was the sole occupant of the building under owner Kathleen Johnson alongside her husband and Town Supervisor, Ben Johnson.

Narrowsburg Motors delegated their operations to only the basement floor while Bar Veloce was granted the upstairs space.

However, according to various Freedom of Information Law requests (FOIL) detailing correspondence between the Town, Bar Veloce and the State Liquor Authority (SLA), there appear to be continuity errors regarding the construction of a rooftop bar, despite lack of approval for the use of the building’s rooftop for drinking and dining from the Planning Board.

During construction of the bar, the eatery was developed on the first floor of the building as allowed by the Planning Board. However, as the project continued, the construction spread to the renovated rooftop seating area.

On July 30, 2020, an application sent to the SLA pertaining to the 30-day municipal notice, stated that Bar Veloce had plans to construct the rooftop bar.

On September 15, 2020, indicated on a building permit application, the basement floor would be dedicated to car sales and service (Narrowsburg Motors), and the first floor and roof would be for the cafe (Bar Veloce).

On October 8, 2020, Town Supervisor Ben Johnson issued a letter of no objection for a maximum occupancy of 206 people, including 136 for a “rooftop deck.”

In this letter, Johnson also stated that Bar Veloce had received final approval from the town to operate as an eating and drinking establishment.

According to Narrowsburg Union owners Brendan and Kathleen Weiden, that letter was provided to the SLA as a certificate of occupation, which allowed Bar Veloce to acquire its license to serve alcohol on July 12, 2021.

Bar Veloce received its Certificate of Occupancy from the Town’s Building Department for the sections labeled showroom, boardroom, cafe, and basement shop (for Narrowsburg Motors) on October 5, 2021.

In a letter from the Town’s Code Enforcement Officer and Building Inspector, Jim Crowley, on the same day, he states, “please take note that the Certificate of Occupancy is not issued for the use or occupancy of a rooftop deck as part of an eating and drinking establishment or any other activity.”

Putting it in Park

Like many other residents of the town, the Weidens also expressed concern over the need for increased parking, and spoke before the Town Board on April 12.

With limited space outside Bar Veloce’s ground floor, they can only provide 12 parking spaces at present, but are required by certificate of occupancy to have at least 33.

According to the Weidens, this remains a great concern, as they fight to ensure the parking at the Narrowsburg Union remains available to their own customers and vendors.

Tusten’s draft local zoning law awaits review, which contains a number of revisions to its parking regulations. This includes the option of waiving parking requirements in the downtown business district, as well as the ability for private businesses to enter into a shared parking agreement.

The Weidens claim that, despite their owning of the property that borders that of Bar Veloce, there have beenzero talks between the two parties on possible expansion or construction of more parking spaces.

The Weidens also claim that trash and debris have breached the chain-link fence that separates property they own from Bar Veloce.

The Weidens told the Democrat that they are not against development within the town, but only wish that the town code is followed and enforced fairly, and that parking on the Narrowsburg Union property is not compromised in the interest of their customers and tenants.

Why the engines stalled

The rooftop section of the cafe was not the only floor that was confronted by the Weidens. To challenge the first-floor certificate of occupancy, the Weidens brought an appeal before the Zoning Board of Appeals (ZBA) on February 14.

It was there they laid claim that in the original draft, Bar Veloce was approved for a 30 by 30 square-foot cafe, including a bar of 980 square-feet.

However, according to the September 2020 building permit application for Bar Veloce’s first floor, the anticipated use of square feet was listed as 1,933.

A ZBA meeting was scheduled to be held in March at which the Zoning Board would hear the case and witness presentations from Bar Veloce and Crowley.

However, Bar Veloce Owner Frederick Twomey filed an Article 78 proceeding just prior to the meeting in an attempt to appeal the ZBA’s authority to hear the case. Judge Mark Meddaugh of the Sullivan County Supreme Court issued a stay on the ZBA hearing, keeping the businesses doors shut for the time being.

The Democrat reached out to Bar Veloce Owner Frederick Twomey who declined to comment due to pending litigation. Bar Veloce has remained closed to the public.