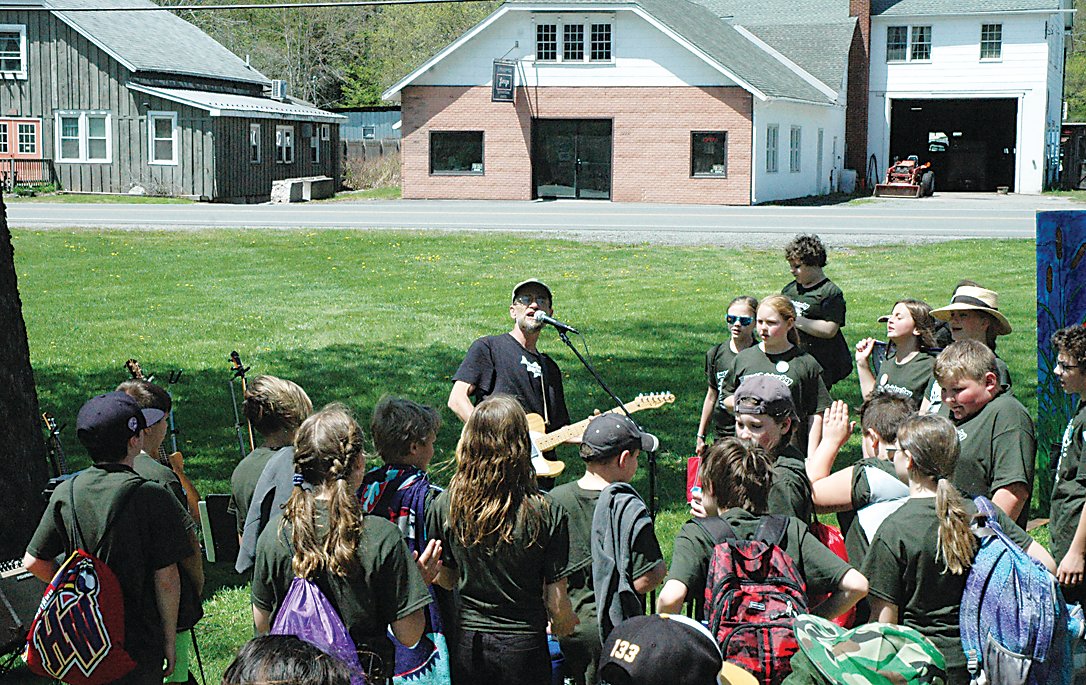 Environmental Folksinger and songwriter Ira McIntosh performed for the students after all the fish had been released.
Derek Kirk | Democrat 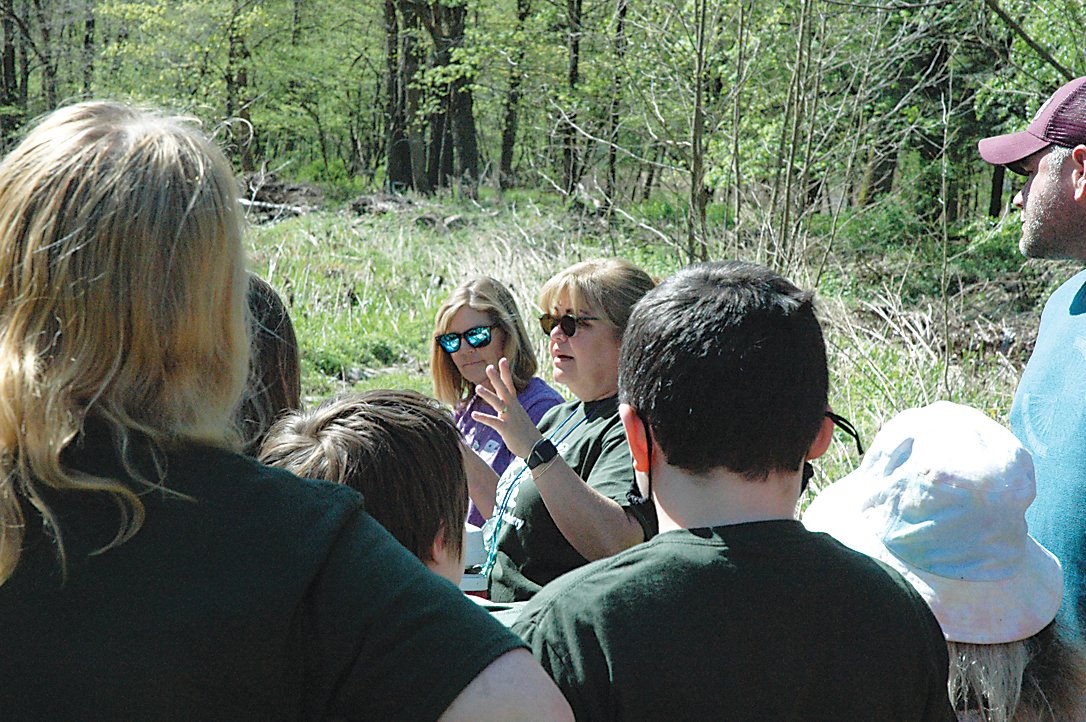 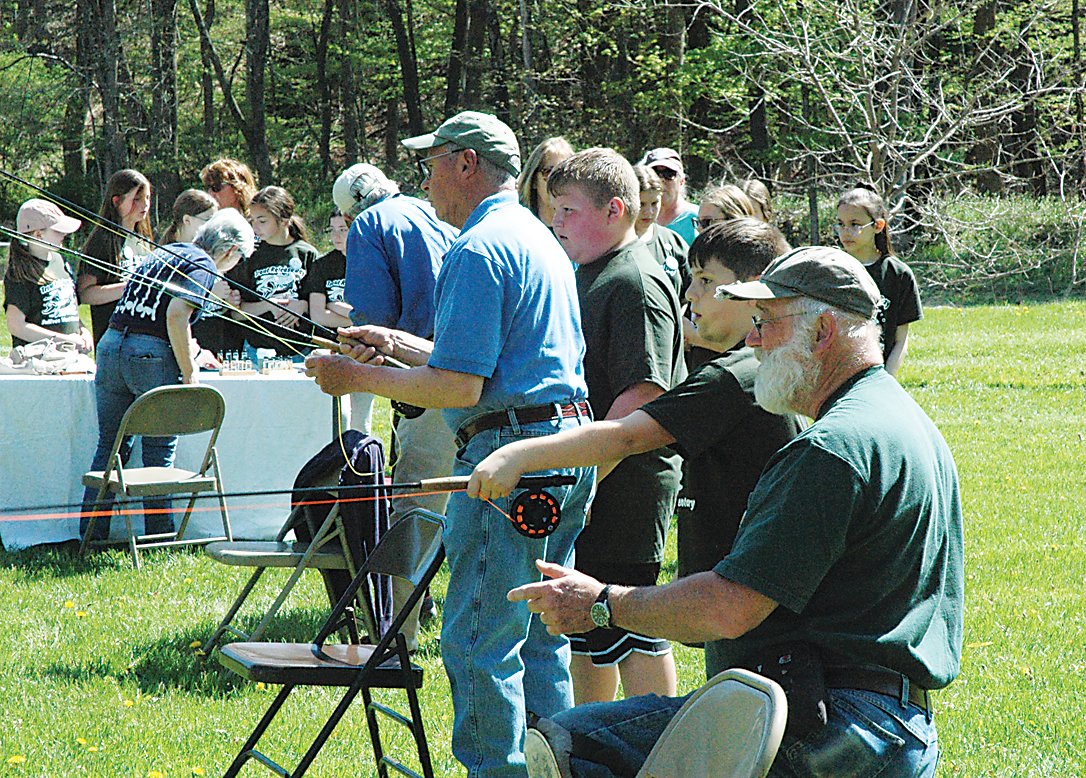 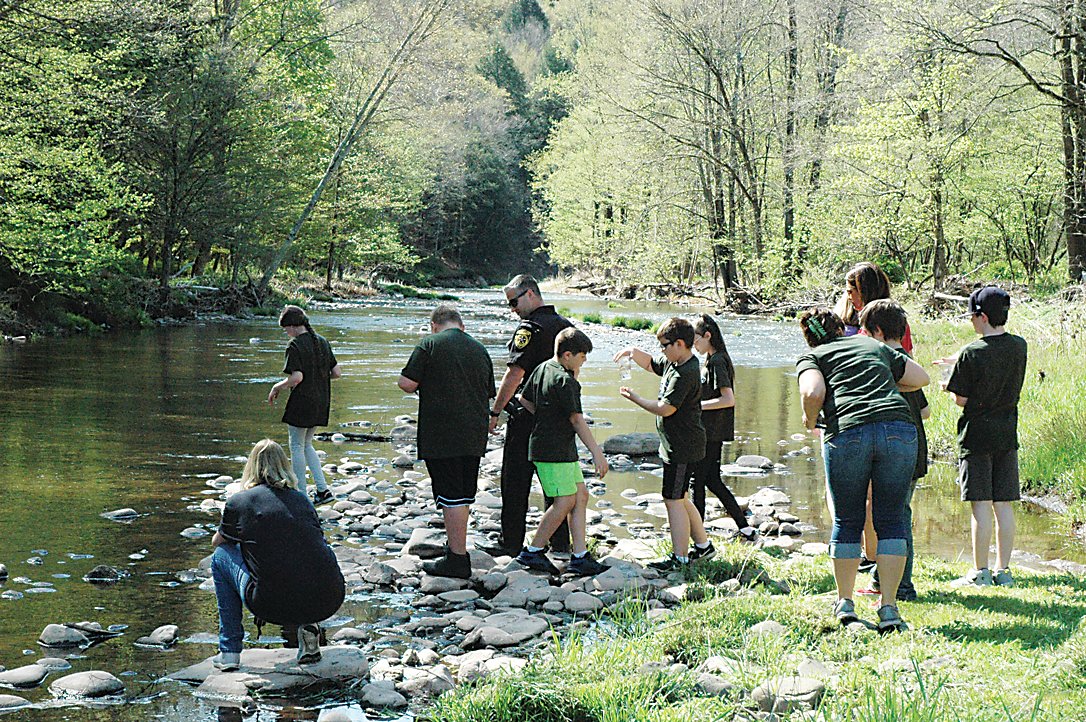 Sullivan West students bid farewell to the Trout as they released the fish into the Callicoon Creek in Jeffersonville.
Derek Kirk | Democrat
Previous Next
Posted Tuesday, May 17, 2022 6:56 am
By Derek Kirk

JEFFERSONVILLE — For the 15th annual Trout Release Day, students from four Fifth Grade classrooms at Sullivan West Elementary celebrated alongside the Upper Delaware Chapter 611 of Trout Unlimited as a part of their Trout in the Classroom program by letting loose roughly 400 young fish into the Callicoon Creek in Jeffersonville on Thursday, May 12.

Classrooms received the Trout eggs in October and were charged with the responsibility of caring for the young fish, all in preparation leading up to the big release. The school began with only two tanks 15 years ago, but with financial assistance from Jeff Bank, they now currently maintain five fish tanks.

“The school has been extremely supportive of the program,” said Pamela Reinhardt, Chair of the Trout Release Program for Chapter 611.

“This isn’t about raising fish and releasing them into the stream ... this is a program to teach them the importance of our environment.”

Throughout the morning, the children cycled through five stations.

Two stations were put on by Rangers from the National Park Service who talked to the students about information on the rivers and creeks via an enviroscape table, as well as information on the natural birds of prey that live in the area. Looking up to the sky, students even noticed one Bald Eagle who watched from above as they continued with their festivities.

One station was put on by Trout Unlimited Upper Delaware Chapter 611 consisting of four fishing rods in which, under the guidance of experienced fishermen, students practiced their fly fishing techniques by attempting to land their “hook” in a series of hula-hoops set a few yards across from them, as well as view a display of insects and fishing equipment.

Of the final two stations  operated by teachers of Sullivan West Elementary, one tested the Ph balance, speed and temperature of the water, and the other for the releasing of the fish. Students were given plastic cups filled with young Trout, and wished them farewell as they were released downstream.

“This is great opportunity for our kids to connect with the community and to connect with one of our best natural resources,” said Sullivan West Interim Superintendent Dr. Kathleen Bressler.

Before leaving the creek, students joined in song and dance with local environmental folksinger Ira McIntosh, who performed a handful of original pieces. Shortly after the tunes had concluded, the children returned to the school to continue their day with activities, including enjoying trout-shaped cookies, arts and crafts, and a Swim Upstream Race in which students got out their energy by racing scooters propelled by plungers.