ELDRED –– The Bulldogs and Yellowjackets battled it out under the lights on Friday. From sloppy snaps and costly penalties to precise passing and downhill running, this game had it all. … 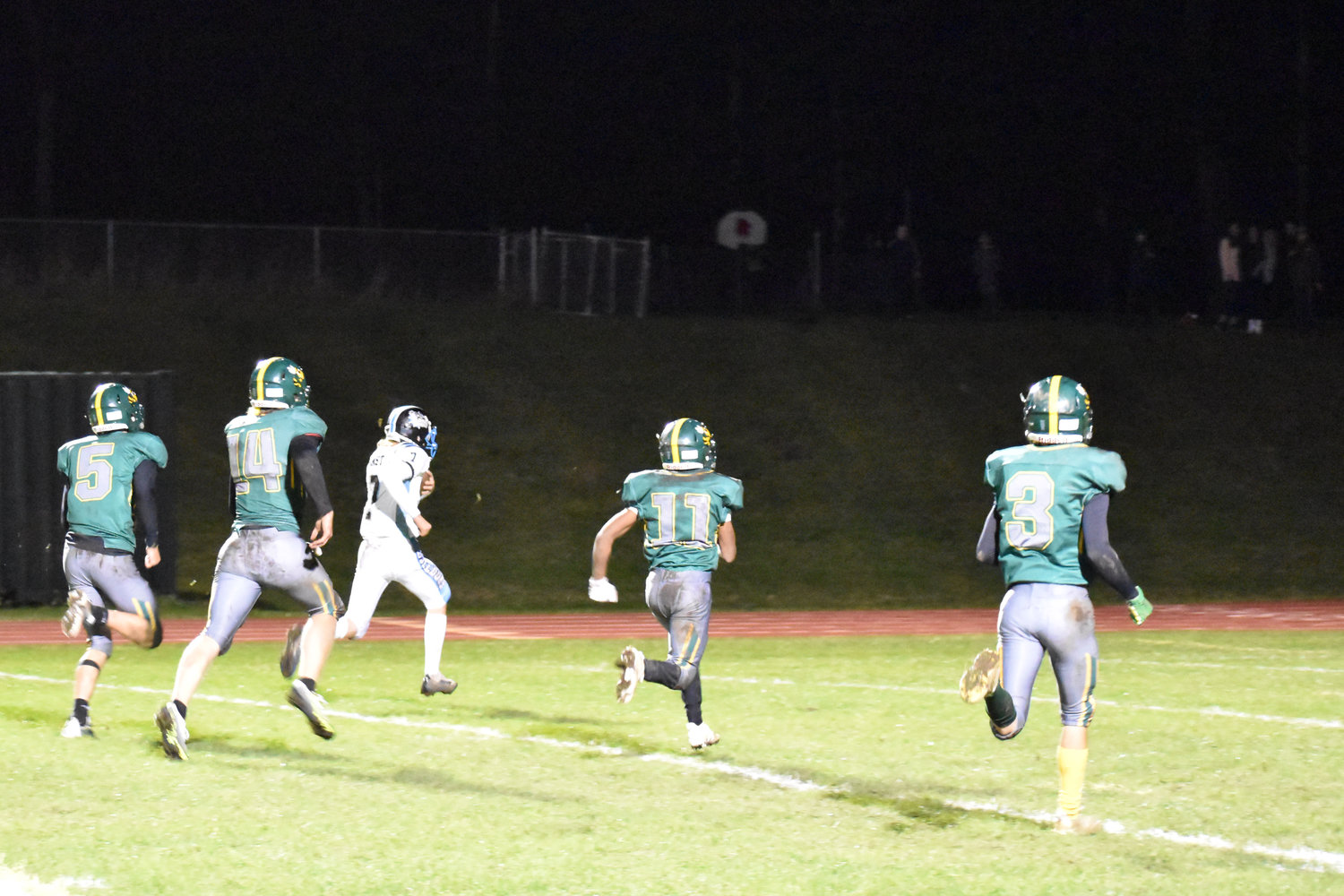 Adam Ernst caught two second half passing touchdowns from Andrew Hubert. The Bulldogs came up big in the second half to erase a 10-0 deficit and win 14-10.
Anthony Morgano | Democrat 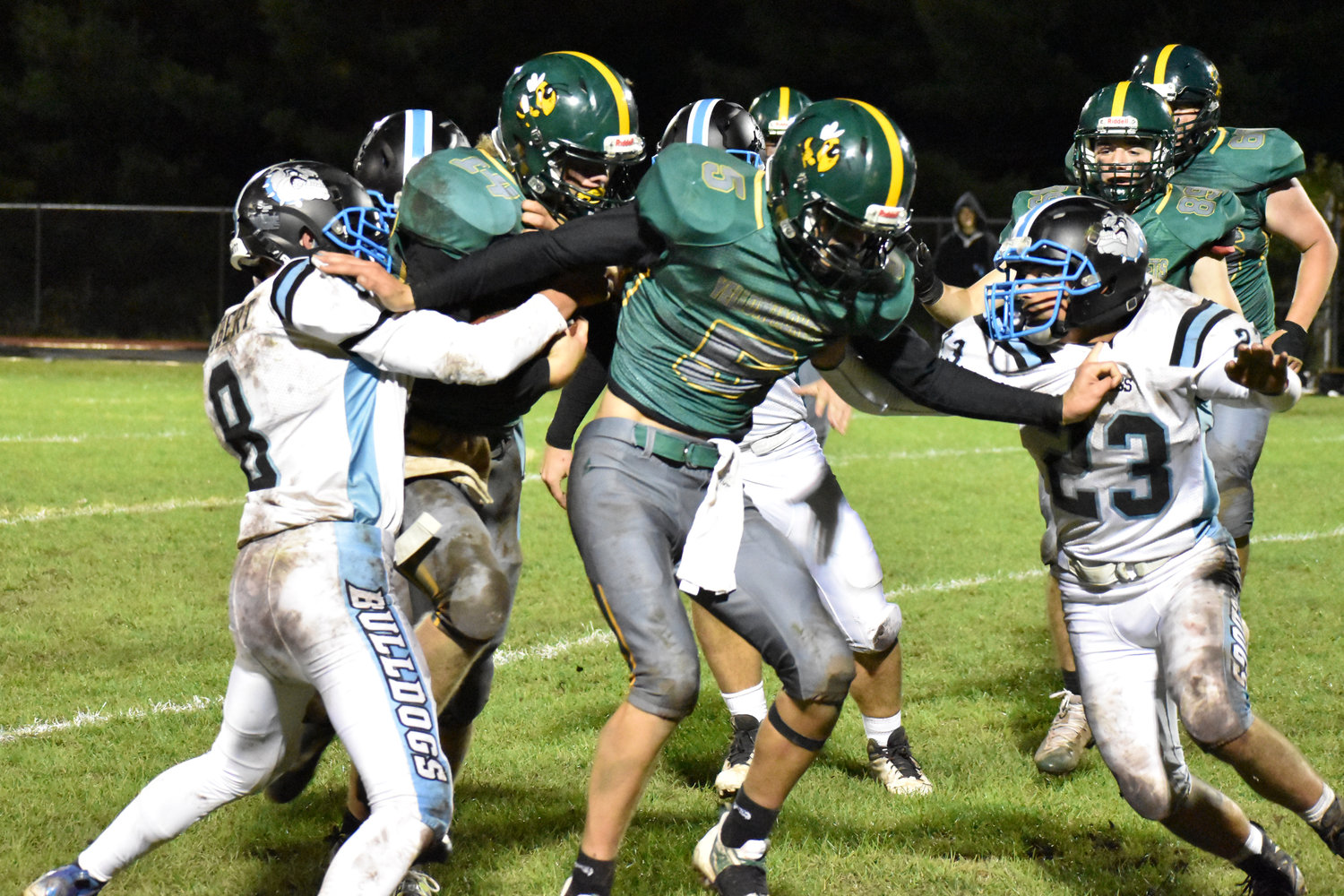 Eldred QB Frankie Whitmore totaled 150 yards of offense, including 106 on the ground. Many of those came in the last drive of the fourth quarter as the Yellowjackets marched down the field in an attempt to re-take the lead.
Anthony Morgano | Democrat 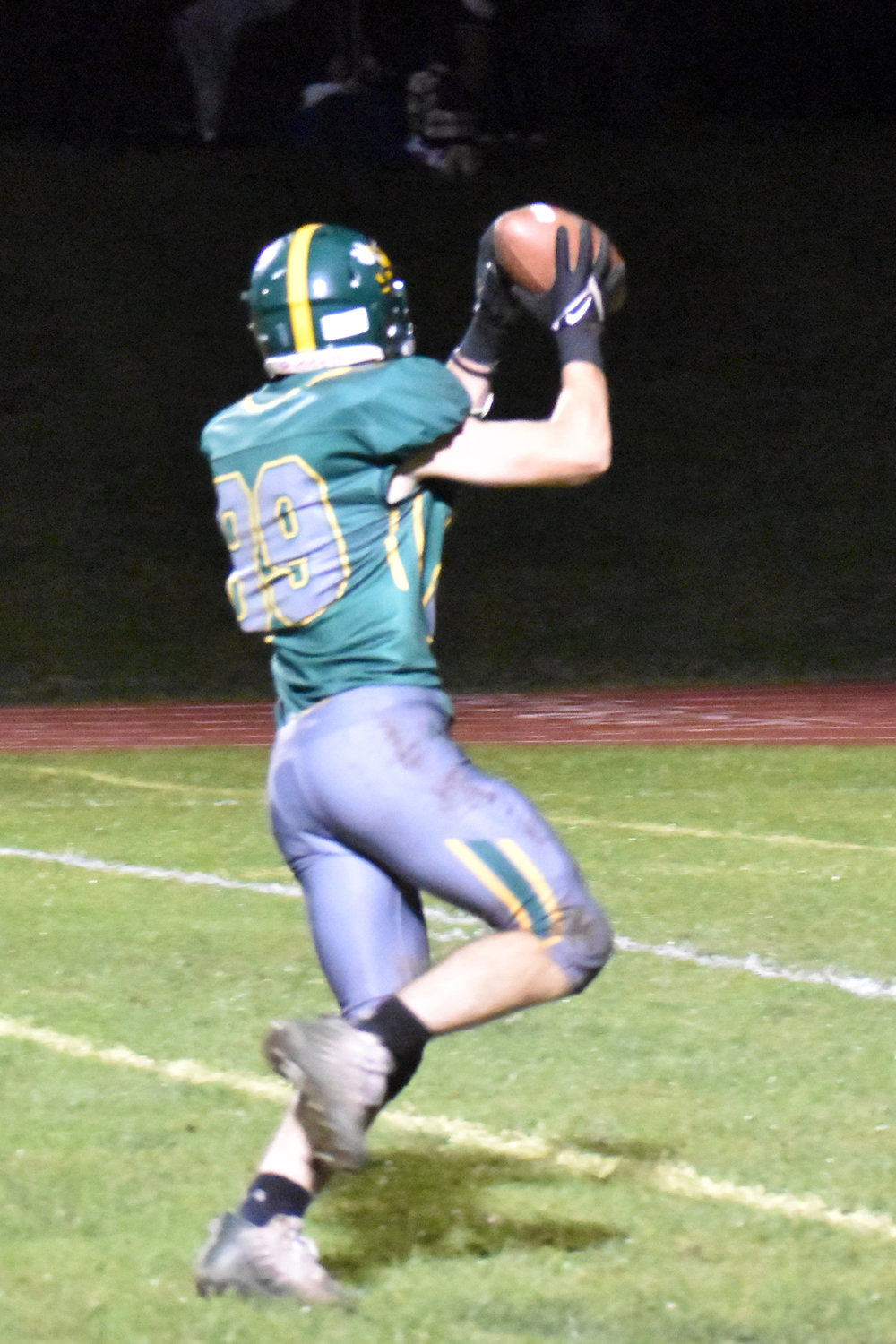 ELDRED –– The Bulldogs and Yellowjackets battled it out under the lights on Friday. From sloppy snaps and costly penalties to precise passing and downhill running, this game had it all. As time ran out in the 4th quarter, it was Sullivan West’s late surge that gave them the 14-10 victory over the shorthanded Eldred team.

Trai Kauffman and Dom Furlipa were unavailable for the Yellowjackets, which limited some of their offensive efforts. The first half was a defensive stalemate as the two teams battled for field possession by punting back and forth. Ultimately, Eldred won that battle in the first half, pinning SW against their end zone and forcing a three and out. After a bad snap on the punt led to a safety, Eldred took a 2-0 lead with a few minutes left in the half.

Sullivan West, with a sudden urgency after falling behind, marched the length of the field to give them a chance to take the lead before the half. However, a penalty gave the Bulldogs a 4th and goal from the 20, and they were unable to punch it in. Eldred took a knee with six seconds to enter the break.

To start the second half, Sullivan West switched things up by starting Rally Cruz at the QB position. The wildcat offense was successful at first, but SW was still unable to score, and their drive stalled with Eldred getting the ball back.

On 3rd and long, QB Frankie Whitmore tossed a pass for a first down, and a late penalty against Sullivan West added an extra 15 yards to the end of the play, giving the Yellowjackets great field position and a fresh set of downs. A few plays later, Eldred had a 4th down in the red zone, decided to go for it, and scored a touchdown to make it 8-0. Eldred converted the 2-point conversion to increase the lead to 10-0.

Sullivan West returned the ensuing kickoff just short of midfield, driving down the field quickly and efficiently under backup QB Andrew Hubert, who connected with Adam Ernst for the touchdown with 31 seconds left in the third quarter. The 2-point conversion was good and the score was 10-8.

Eldred moved the ball close to midfield to start the fourth, but an unfortunate fumble that was recovered by Sullivan West ended their drive.

Sullivan West marched down the field for the second time in two drives, and Hubert connected with Ernst for their second touchdown, giving Sullivan West a 14-10 lead with 9:03 remaining in the game.

Eldred had their chance, taking nearly eight minutes off the clock as they marched their way down the field with Whitmore running the same play scheme and continuing to gain yards. With just over a minute remaining, Eldred had a goal to go situation, but on a 3rd and goal from the five, with the play they wanted ready to go, a false start penalty pushed them back to the nine. Their final two attempts at the end zone were fruitless, and they turned the ball over to SW with under a minute to play.

With all three of their timeouts, and the Bulldogs backed up against their end zone, the game was not quite over. That is, until Hubert rushed for a first down and effectively ended the game, save for the victory formation to run out the clock.

Eldred coach Sean Mcavaney said, “I’m proud of the kids and how they stepped up tonight. Sullivan West is a good physical team, and we were able to play them much better than we did last year.”

Sullivan West’s Justin Diehl said, “I love the competition in the division this year. It has leveled out a bit and it really seems like it’s open for anyone this season. Credit to Eldred on a well-fought game, and now we have to prepare for a tough Fallsburg team next weekend.”