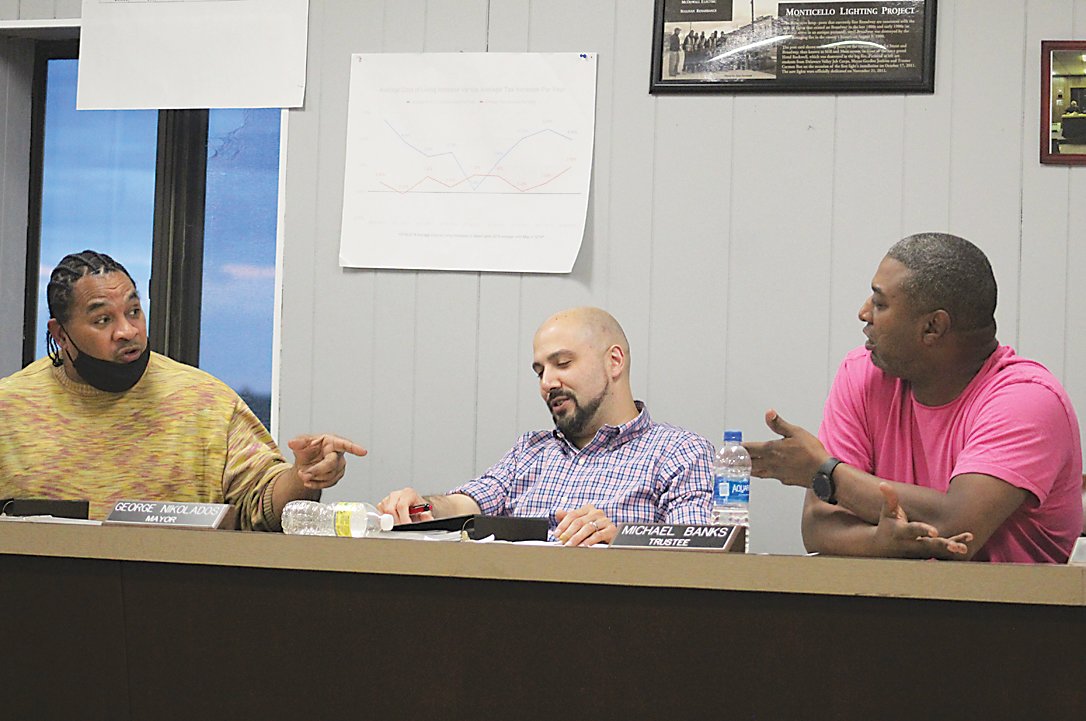 Last Wednesday’s Monticello village board meeting became contentious as a majority of the board voted to appoint Michael Sussman as special counsel. Pictured (from left) are Trustee Gordon Jenkins, Mayor George Nikolados and Trustee Michael Banks.
Matt Shortall | Democrat
Posted Friday, May 27, 2022 5:50 am
By Matt Shortall

MONTICELLO — When Village Attorney Michael Davidoff resigned from his position in Monticello last month it was expected that Deputy Village Attorney Richard Baum would be appointed to replace him.

Since then, Village Mayor George Nikolados said that Baum will remain as deputy attorney dealing primarily with planning and zoning law. Recently elected as a Town of Thompson Justice, Baum would have had to recuse himself from a number of roles if he had been appointed village attorney.

During the village board’s most recent meeting, Mayor Nikolados made a motion to appoint Attoinette Williams as village attorney.

Trustee Michael Banks and Nikolados were in favor, but Trustees Rochelle Massey and Gordon Jenkins voted against the appointment.  Trustee Carmen Rue said she would abstain before changing her vote to no.

“Are we serious?” Nikolados asked incredulously. “This young lady is a Monticello resident, has grown up here and should be the person representing Monticello.”

Banks said that Williams’ appointment would have made her the first Black woman to serve as village attorney in Monticello.

At that point the meeting descended into a shouting match. Mayor Nikolados and Trustee Banks stood up and began to walk out of the room. Some trustees talked over each other before Nikolados and Banks eventually returned to the meeting.

Sussman has previously represented both Jenkins and Massey as their attorney. Several years ago, Sussman represented James Snowden in a wrongful termination lawsuit against the village stemming from his time as building inspector.

“I did think it was a conflict of interest for an attorney who just finished suing the village, and represented two board members and the village manager, to now be the lawyer for the municipality,” Nikolados said to the Democrat.

Jenkins responded that some people in the village “remain bitter” about the recent election that returned him to the board.

“Things are changing,” Jenkins said. “Michael Sussman would not compromise his integrity to do favors for me or anyone else ... he will follow the law and do what’s right.”

Trustee Rue said she thought Sussman had a wealth of experience to serve the village.

When reached for comment this week, Sussman said, “Monticello has been a troubled community. It’s been a divided community to some extent for quite a while ... The imperative is for people to come together, problem solve, figure out what the major issues in the village are which need to be addressed and find out practical political and legal ways to address them.”

Sussman acknowledged his past representation of Jenkins, Massey and Snowden, but said he would work with everyone to try to ease the polarization in the community.

“My job is to work with all of those who have the best interest of the village at heart and that’s what I will do,” Sussman said.