Since 2018, Sweethearts & Heroes has been visiting Fallsburg Central School District (FCSD) to deliver its powerful anti-bullying message. They were on the campus at Benjamin Cosor Elementary … 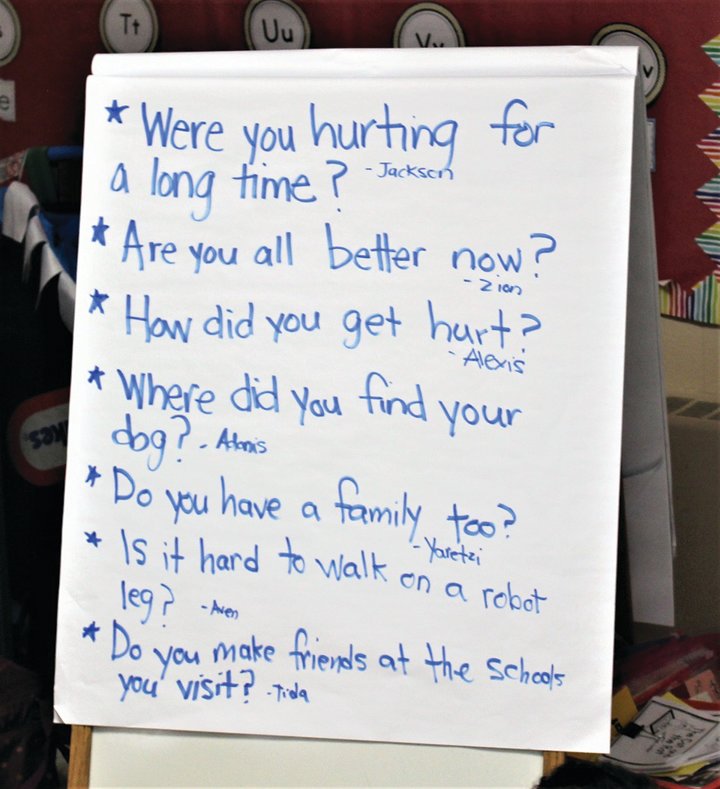 The easel contained the children’s questions for Rick.
Contributed photo 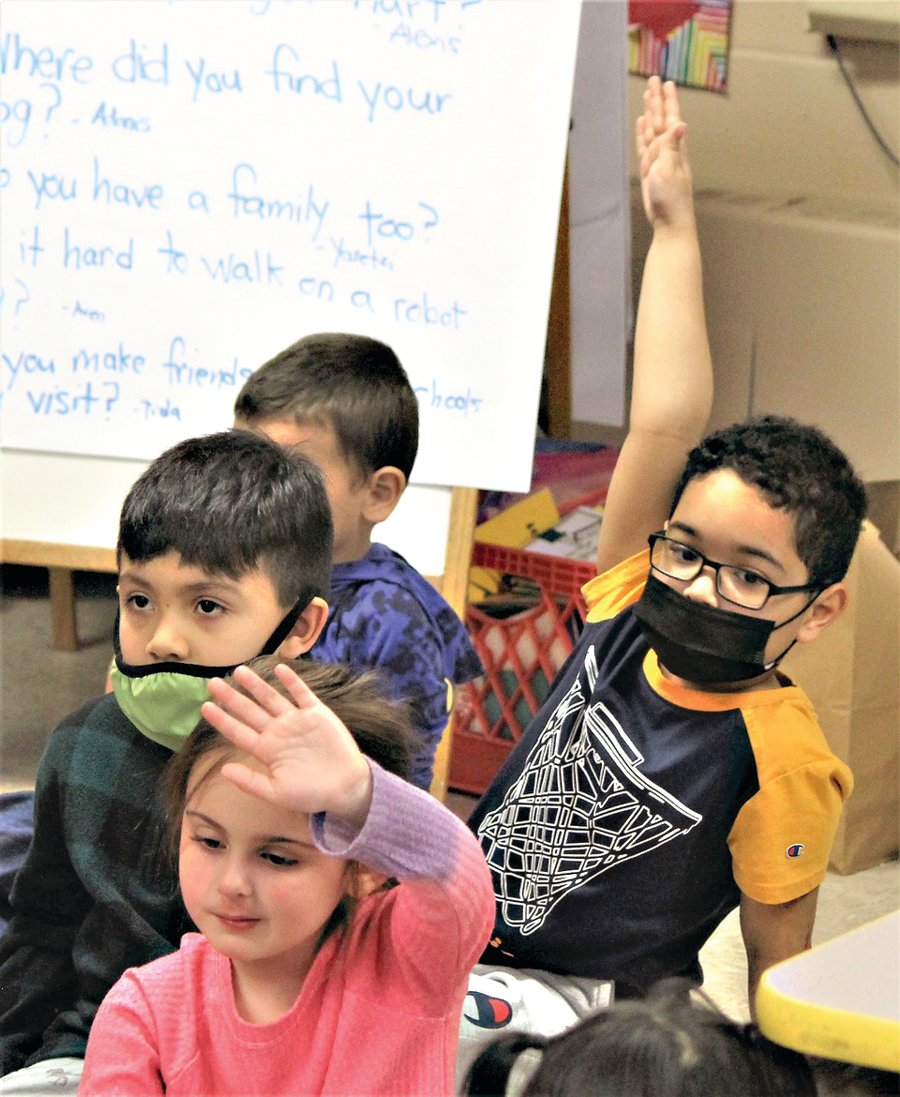 A group of children from the class listening to Rick speak and asked questions.
Contributed photo 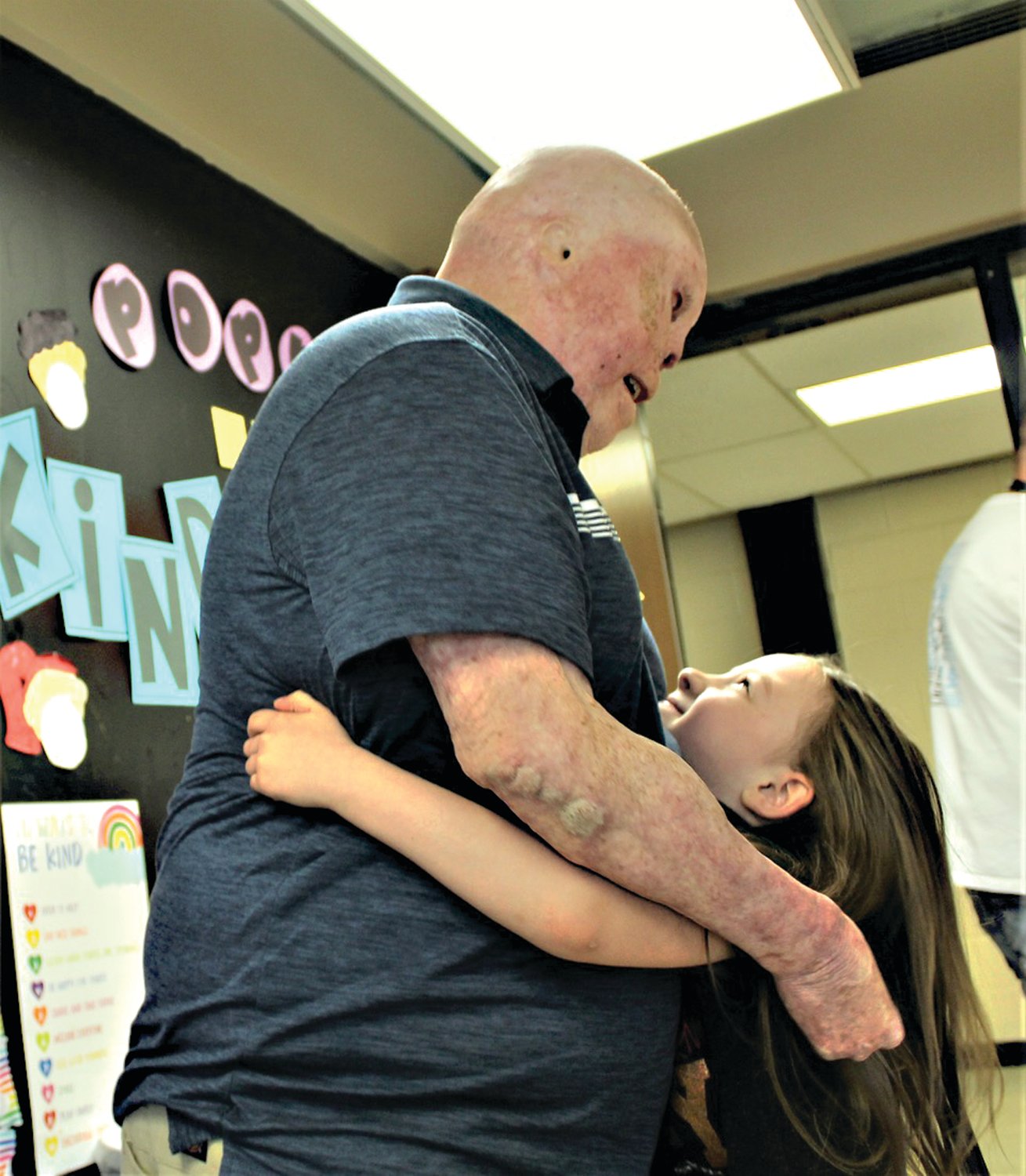 Since 2018, Sweethearts & Heroes has been visiting Fallsburg Central School District (FCSD) to deliver its powerful anti-bullying message. They were on the campus at Benjamin Cosor Elementary School for two full days of programs. One of these programs was visiting the younger students from Pre-K through third grade. Rick Yarosh made these visits on April 13.

Rick was severely injured as part of a tank unit during the Iraq War. After running over an IED, the tank caught fire and engulfed Rick in flames. He was able to jump from the vehicle, drop to the ground, and roll his body towards a canal that extinguished the flames, he was rescued by others and flown to a burn treatment facility.

He endured many months of severe burn treatment and rehabilitation. He has a prosthetic lower leg because of the jump out of the tank. He lost his ears and most of his nose. His face and body are covered in scar tissue. He has vision, hearing, and sense of smell. He is grateful to be alive.

The kindergarten children had never seen Rick until the day before the visit when they were at a large assembly with all other kindergarten classes, pre-K students and first through third graders.

So, they knew about his story. In preparation for the classroom visit, the teachers, Ms. Gelsomino and Mr. Persten, had the children ask questions that they wrote down on an easel.  Attached to this article is a copy of the questions.

As Rick entered the joint classroom, the kids welcomed him with applause and shouts. One little girl was so excited, she ran up to him and put her arms around his waist. Rick hugged her, and they looked in each other’s eyes. It was a joyous greeting.

The students asked their questions. They were not shy or timid about asking anything. He was wearing shorts so everybody could see his prosthetic right leg. When they asked about how it felt to be missing a leg, he tapped on the artificial limb and said, “You know what I call this? This is my wicked, awesome robot leg!” The kids smiled and laughed along with Rick.

The fifteen-minute visit was filled with good-natured mutual affection between Rick and the children. He delivered a message of hope and overcoming hard challenges in life.

When asked if he was bullied as a kid, he said that he was not and nor did he bully others.

He saw bullies in his school, but it was not until he got older that he did things to try to stop it. He emphasized that it was up to students to stand up against bullying and call it out when they saw it. Rick left a group of happier and smarter children on his way to another kindergarten class.